It's not easy being bi

Admissions of "bisexuality" are met with a slew of negative stereotypes. Maybe it's time to put the term to bed 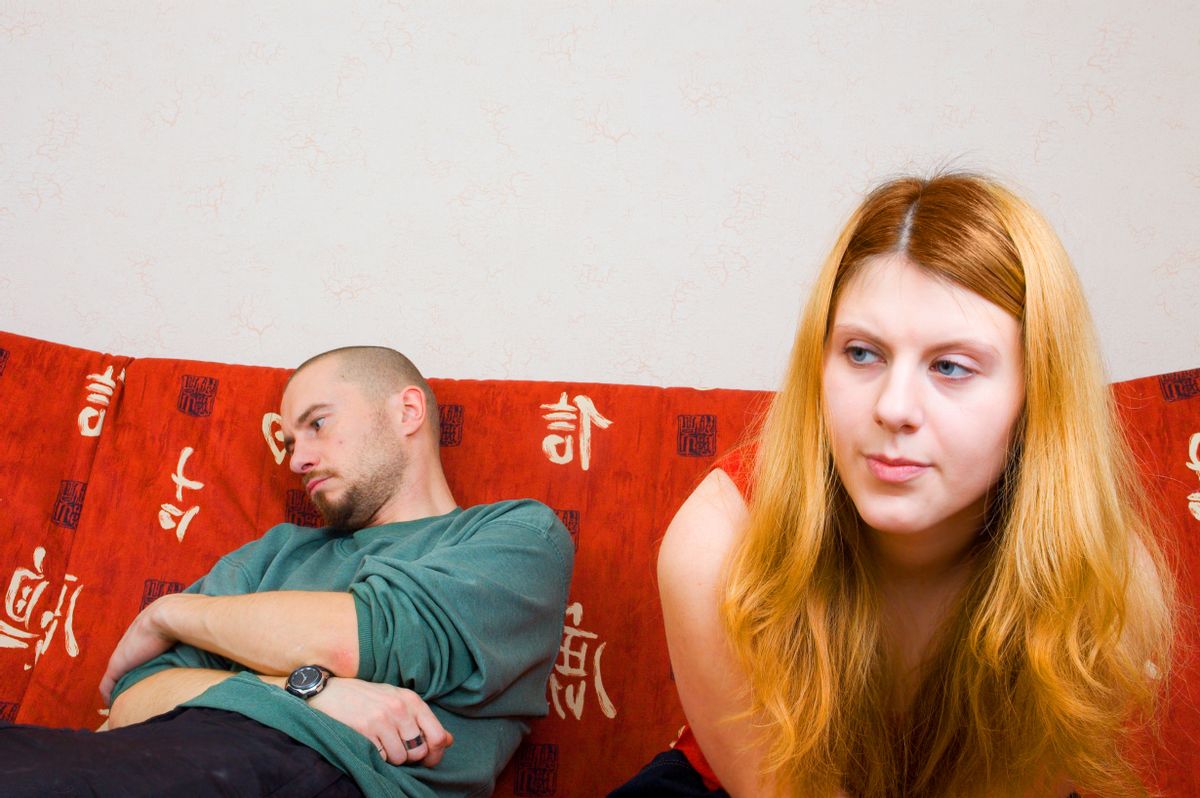 Since I came out over a decade ago, I’ve been a virulent defender of bisexuality. I’ve written numerous articles, dispelled stupid myths and gotten in far too many heated arguments about the misunderstood goth teenager of sexual identities. While I’m done getting in knife fights over whether Willow from “Buffy the Vampire Slayer” was really gay or really bi, I’ve noticed a cultural shift in people’s willingness to use the word “bisexual” as an identity or descriptor of their sexual behaviors (with the exception of surveys and those in the medical establishment).

According to data from four recent national and two state-level population-based surveys, approximately 9 million Americans identify as lesbian, gay, bisexual, or transgender (LGBT). Only 1.8 percent of those people identify as bisexual, despite the fact that an estimated 19 million (8.2 percent) report that they have “engaged in same-sex behavior” and 25.6 million (11 percent) who’ve admitted to having same-sex attraction. It’s clear that bisexual behavior is occurring. In a 2013 PEW report on LGBT Americans, bisexuals were far less likely to be out to important people in their lives than lesbians and gays. “77 percent of gay men and 71 percent of lesbians say most or all of the important people in their lives know of their sexual orientation, just 28 percent of bisexuals say the same. Bisexual women are more likely to say this than bisexual men (33 percent vs. 12 percent).”

Similarly, the (not at all scientific) call I put out on Facebook and Twitter yielded dozens of responses about the problems that bisexuals have with the word bisexual (far more than could fit in this piece), and were full of stories about the difficulties and denigration they have faced because of using the label. So why do people shy away from (if not outright cringe at) the word “bisexual” being applied to them? The problem, I think, is the word itself. Attraction to more than one gender will always exist, of course, but has the word “bisexual” outlived its usefulness? Here are some of the main reasons why it might be time to put the word to bed.

No one can agree on a definition.

“Bisexual” has been around since 1824. Its original use is more akin to androgyny (“showing characteristics of both sexes”) than anything having to do with sexual behavior. Its common usage (“sexual attraction to both men and women”) is one that many feel is reductive (more on that below). Also, there’s confusion about what “counts” as bisexuality, especially if you are in a committed, monogamous relationship. Is desire enough? What if you’ve slept with a number of women, but only see yourself ending up with a man? What if you’ve never had a same-sex experience, but exclusively fantasize about it? What if you’re 99 percent gay, but would go straight for Beyonce in a heartbeat?

As Janet W. Hardy, author of The Ethical Slut, told me, “I use the word bisexual for publicity reasons, but it's both too small and too large for a rather complex set of identities.” When you factor in attraction, history, behavior, identity, and fantasy, you get something that a simple word like “bisexuality” can’t come close to describing with any kind of accuracy. “I don't like the word because I still don't fully understand what I am myself, and as soon as I say bisexual I feel like lines have gone down that I'm not sure I'm ready for yet,” wrote one of the respondents, Heidi, in an email.

As I’ve written before, admissions of bisexuality are met with a slew of negative connotations and stereotypes. These can include that bisexuals are promiscuous, indecisive, going through a phase, closet cases, taking advantage of straight privilege, want ALL THE THREESOMES, are never satisfied, just experimenting, doing it solely to please men, and so on. As Seth, a male friend, put it, “The word has more baggage than an airport.” Another described it thusly, “The word is immediately associated now with cheap, tacky exhibitionism, with drunken one-offs, with out and out sluttiness.” There’s not one positive association with bisexuality, except perhaps that our choices for romantic and sex partners are presumed to be higher. (For the record, it’s not. Twice the probability = twice the likelihood of rejection.)

Stereotypes have denigrated the word to the point where it’s basically unsalvageable, in both straight and gay communities. Laura, a Twitter respondent, argued that this is precisely why we should keep bisexuality around. “For some, I think the difficulty that comes along with the identity forces [bisexuals] to cop out to owning the word, and instead, use terms that are ‘safer’ or more understood by society. Bisexuals are excluded from hetero-normative society, as well as many gay subcultures. So, I have a hard time saying that the word is no longer useful."

Laura has a point, and the problem of bisexual invisibility has certainly contributed to the distancing from the word itself. A recent report from the CDC found that bisexual women were twice as likely to be sexually abused. This came on the heels of a 2011 report that noted bisexual women were far more likely to be anxious, depressed and prone to binge drinking. The participants of the study said they felt “invisible.” Discrimination and social stigma have real mental health consequences. A Google search for “bisexuality doesn’t exist” yields nearly 4 million entries, from personal blogs to articles in theNew York Times. And it’s not just a search engine problem, bisexuals have few reference points to cling to culturally, historically, politically and statistically.

Even on online dating sites, which is one of the few mediums where you can wear your sexuality like a badge for everyone to read, it’s rare for a bisexual to identify as such. On OkCupid, I found the discrimination against bisexuals by queers to be especially rampant. “Bisexuals need not apply,” one lesbian’s profile read. “Nothing personal, but I don’t date bi girls,” said another, as if the word itself was suspect, as if no lesbian in the history of muff munching had ever in their life dated or fucked a man.

For bisexual men, it’s even harder. “My last experience on OKC confirmed that I'm just fucking myself identifying as bi (and not with a strap-on),” as Seth put it. And even when bisexuals try to date straight partners, problems can abound. As one respondent said, “I've had guys flat-out say to me ‘So you're straight now, right?’ And having to reply that no, I'm not straight, and you knew this before we got together. I'm not sure, maybe it comes back to an issue of whether or not there's an ill-planted idea that if I'm bi, I'm not going to be able to be fully satisfied by one person of one gender.” In many cases, the stereotype that it’s “easier” to date as bi has been turned on its head. Paradoxically, the idea of sexual openness while dating proves to actually be restrictive.

It’s not just dates out bisexuals lose, however. “When I started dating a guy for the first time, I actually lost several of my more politically minded lesbian friends,” notes Kate. “They sat me down for chai and told me that they felt like I was betraying our political work and even expressed concern for my mental health. I also lost a straight male friend, who told me that he had always thought of me as ‘one of the guys’ and didn't feel comfortable keeping me as a close confidant anymore.”

What’s in a name?

Even Alfred Kinsey, whose research in the 1940s did heaps for highlighting the existence of sexual fluidity, didn’t like the word bisexual to describe sexual behavior. "Until it is demonstrated [that] taste in a sexual relation is dependent upon the individual containing within his anatomy both male and female structures, or male and female physiological capacities, it is unfortunate to call such individuals bisexual.”

Even if you don’t abide by any one term, the unlabeled can’t often stay that way for long. “It gets harder the more you meet people, because when introducing yourself to someone there seems to be an inherent need to 'be' something, and the label that applies to me, I detest using because of what it has come to mean,” wrote a woman on Twitter.

Bisexual, for better or for worse, is what we have, but until and unless it can be wrested from the trenches of misinformation, stereotypes, and discrimination, I expect its downward trend to keep heading that way, in favor of different words, sentences, mish-mashes, and reconfigurations, the mutability of desire proving once again that it won’t be contained.

Until then, I’m sticking with, “My heart is gay, but my vagina is less discriminatory.”