Waves of American missionaries have turned Uganda into the test case for right-wing, anti-gay Christian backlash 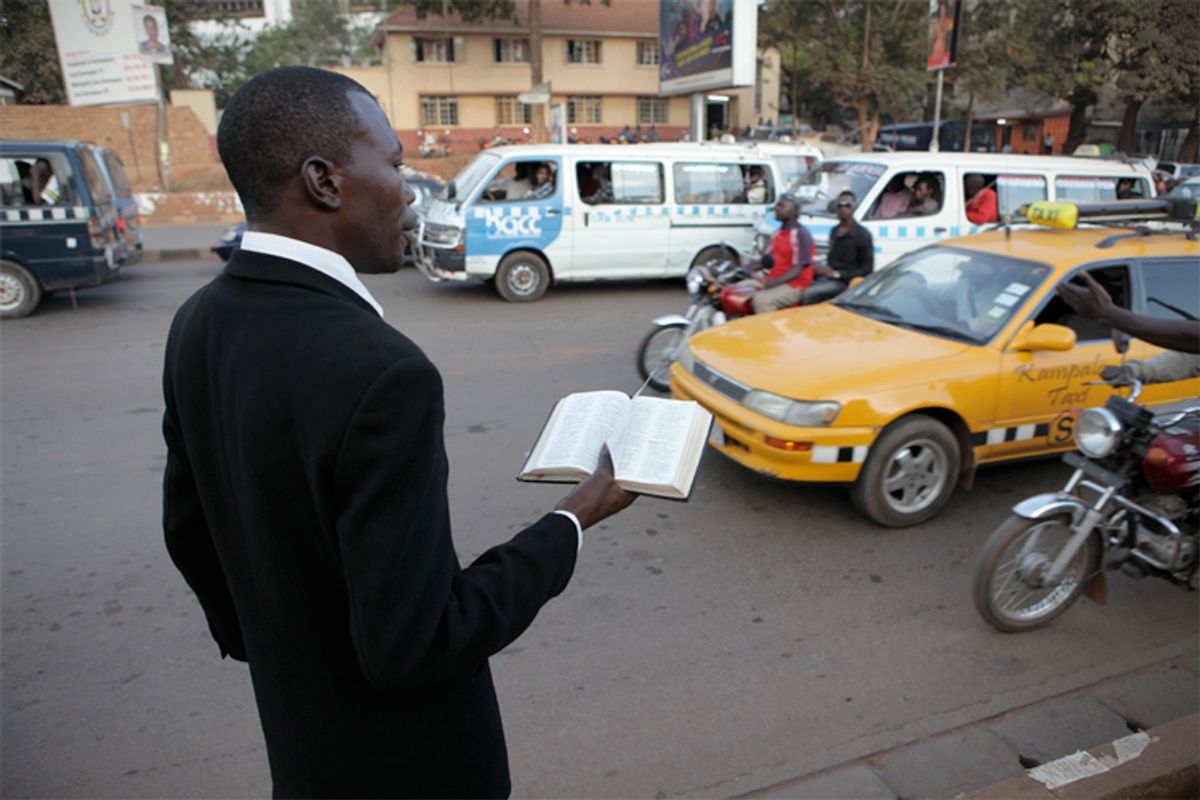 Why did God pick Uganda to be the center of his great renewal? Or, to put the question another way, why did right-wing American Christians seize on the “Pearl of Africa” as the place to light the fuse of worldwide evangelical revival? That question is only partly answered in Roger Ross Williams’ documentary “God Loves Uganda,” which plays as a sort of companion piece to the urgent and heartbreaking “Call Me Kuchu,” about the struggle of gay activists amid that nation’s toxic climate of right-wing Christianity and official homophobia. Both films touch on the life and death of David Kato, who by his own account was Uganda’s first out gay man, and on the infamous proposed Ugandan law – not yet put into practice -- carrying life imprisonment for homosexual acts and the death penalty for repeat offenders. (No one seems to have noticed that the law is incoherent on its face: How are you supposed to sin again if you’ve been locked up for life? Do they plan to impose the death penalty for sex in prison?)

I definitely won’t try to pass myself off as an expert on Uganda or sub-Saharan Africa, but I think it’s safe to say that the reasons why Uganda proved such fertile soil for the most extreme version of Western Christianity are complicated and controversial. Some observers have suggested that there were elements within traditional African culture that responded strongly to the extreme moralism and apocalyptic rhetoric of Christian evangelism. Another way of viewing the situation is that today’s missionaries are pursuing a kind of strategic ideological colonialism, taking advantage of the chaos and confusion that followed the collapse of so many of Africa’s post-colonial regimes.

In the case of Uganda, a nation of 35 million people with many different ethnic and linguistic groups, Christians from the United States and other Western nations have evidently supplied a social glue that became part of Ugandan identity, and have also provided many of the social services that longtime president Yoweri Museveni’s weak central government cannot manage. In the years following the ouster of Idi Amin, Uganda’s notorious 1970s dictator, evangelical Christians helped bring medical care and literacy to many of the poorest and most deprived people in Uganda. These undisputed good works were part of a larger strategy to fuel an evangelical revival in the developing world, which from the Christian point of view has worked brilliantly. As we see both in Williams’ film and “Call Me Kuchu,” this has produced an odd situation where African nationalism and anti-Western resentment coexist with the widespread acceptance of religious dogma transplanted and nurtured by white outsiders.

In the best documentary tradition, Williams allows these Christian missionaries and their leaders to speak for themselves, and there is no doubting their sincerity. He spends a lot of time with a group of enthusiastic young missionaries sent to Uganda by the International House of Prayer (yes, it’s known as IHOP), the Kansas City megachurch founded by preacher Lou Engle, a charismatic Christian leader who has long focused on social issues like abortion and same-sex marriage. These are cheerful, wholesome college-age young people, mostly white (with a smattering of Asian-Americans), armed with gospel verses, Starbucks coffee and a can-do attitude. They don’t seem any more robotic or unhip than the crowd you’d see on TV at a Michigan-Ohio State game, although they’re high on Jesus rather than Coors Light and mediocre weed.

As the Rev. Kapya Kaoma explains, these young people no doubt believe they’re doing good, but their African adventure is part of a worldwide Christian-right counterattack. Kaoma is an Anglican priest who had to flee Uganda after becoming an outspoken opponent of the growing spiritual and political power of right-wing American Christians in that country. Not only have evangelical leaders like Engle sent waves of young missionaries into Uganda, Kaoma observes, they have nurtured local leaders like Robert Kayanja and Martin Ssempa, prominent Ugandan pastors who were trained and educated in the United States. Ssempa in particular (who lives in Las Vegas when not preaching in Kampala) has become an incendiary force behind the anti-gay legislation, screening gay porn films for his congregation that depict extreme S/M sex acts and telling them that gays want the freedom “to eat the poo-poo of your children.” I know that sounds like an Onion story, but it appears to be the truth.

Essentially, David Kato and other victimized and persecuted LGBT people in Uganda and other heavily evangelized African nations seem to be paying the price for the fact that Lou Engle and people like him are gradually losing the culture wars at home. Uganda is their biggest success so far, but the long-term vision involves a wave of Christian revival that will sweep out of Africa into the first world, driving back the apparently victorious forces of secularism. But even Engle and his movement, although they strongly oppose gay-rights legislation, did not propose the death penalty for homosexuals. Credit for that belongs in large part to Scott Lively, an unhinged American “ex-gay” leader whose extended rants about how gays had caused the Nazi holocaust (exactly how I do not know) and now sought the destruction of traditional African family life found an enormous audience among Ugandan officials, politicians and teachers.

Lively is so evil and crazy he pretty much makes Lou Engle look like the Dalai Lama, but again, Williams’ film cannot quite explain how he soared to prominence in Uganda. As Kaoma notes, Lively is a “nobody” in the U.S., a bush-league wacko who heads a small right-wing ministry. In East Africa he briefly became a celebrity, who appeared on TV talk shows and gave a lengthy address to the Ugandan parliament during the 2009 deliberations surrounding the Anti-Homosexuality Bill, which was so widely attacked around the world that eventually Lively himself backed away from it. (He has insisted that he advocated for a law that would seek to “rehabilitate” gays and lesbians, rather than punishing them.)

As in “Call Me Kuchu,” there are signs of hope to be found here and there, much of it personified in expatriates like Kaoma and in retired Anglican bishop Christopher Senyonjo, a leading gay-rights advocate who has been excommunicated by his own church. One can perhaps draw lessons from the Great Awakenings of American history, religious revivals that burned as hot as wildfire before life returned to a more normal temperature. This isn’t a terribly satisfactory conclusion, but I suppose we can say that something about the combination of right-wing American Christianity and Uganda’s climate of post-colonial disorder has been uniquely dangerous and unstable, like mixing bleach and ammonia. It’s long past time for the forces of secularism and tolerance, both in Africa and the West, to fight back.

“God Loves Uganda” opens this week at the Chelsea Cinemas in New York, and opens Oct. 18 at the Laemmle Royal in Los Angeles; Oct. 25 at the Belcourt Theatre in Nashville and the West End Cinema in Washington; and Nov. 1 at the Roxie Theater in San Francisco and the SIFF Film Center in Seattle, with other cities and dates to follow.