Tea Party's shutdown lunacy: Avenging the surrender of the South

"The American elite has lost control," and may not rein in the Tea Party, economic analyst Doug Henwood warns Salon 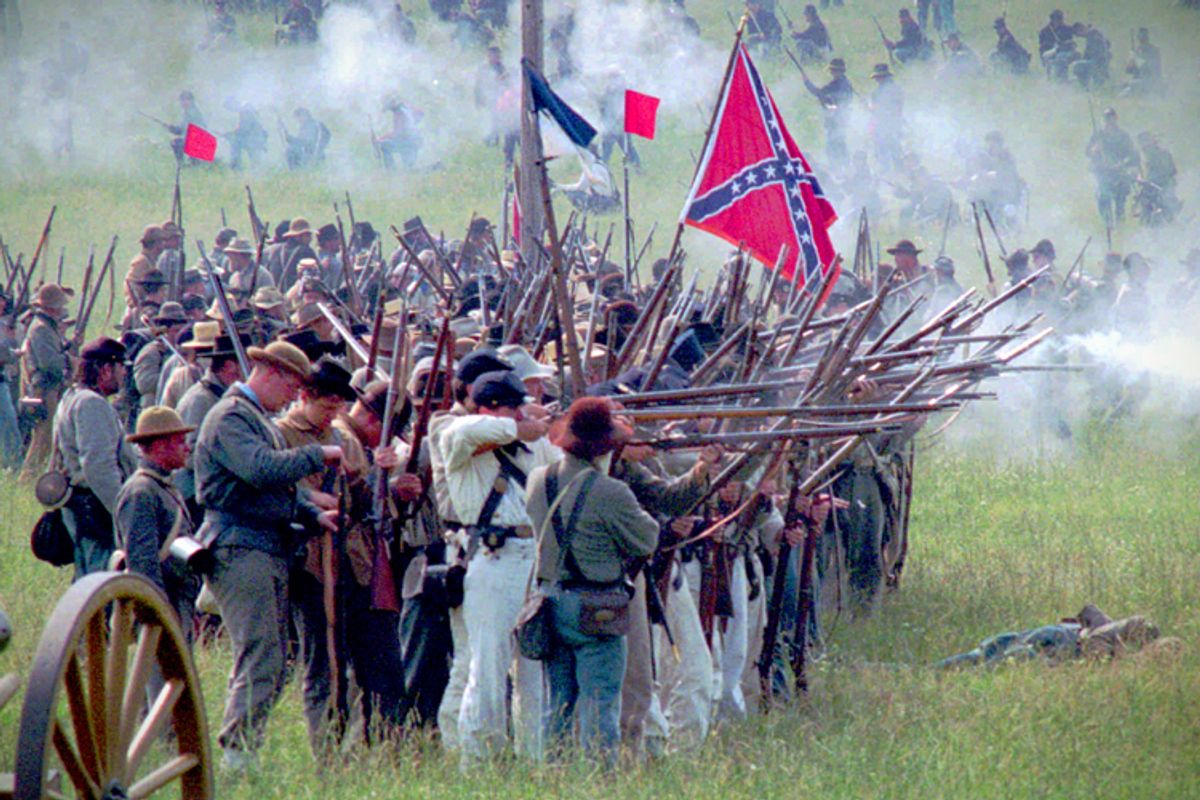 On Monday, Republican Rep. Charlie Dent told me that he could see himself voting to raise the debt ceiling at “the bewitching hour” if “the markets start getting real jittery”; while Tea Party Sen. Ron Johnson castigated the White House for “scare-mongering” rather than “trying to calm the markets” as the Oct. 17 debt ceiling deadline approaches.

While the question of market panic has highlighted the financial markets’ central role in American politics, the Tea Party’s role in pushing debt default brinkmanship has prompted new rounds of debate about the relationship between Big Business and the GOP.

To talk about both, I called up left-wing economic analyst Doug Henwood, the editor of Left Business Observer and the 1997 tome "Wall Street." What follows is a condensed and edited version of our conversation.

There’s a hope or perception from some in the media or Congress that eventually a change in the stock market will force some resolution before a debt default. What do you make of that?

That is, of course, what most people have been presuming. I think the markets have been a little annoyed, but still reasonably confident that things will be solved without a default. I think that confidence may be shaken somewhat, at least the way the bond market is behaving today. You would normally think that that would do the trick, that we would have some kind of game of chicken. But as Vincent Reinhart pointed out, the original game of chicken ended with somebody going over the cliff and dying.

It does seem like this group of really hardcore Tea Party types may not really be impressed. They seem to believe that the cause of justice is on their side, and that they are making some sort of glorious last stand or avenging the surrender of the South in 1865 or something. They may not listen.

I’ve been really impressed by the erosion of what I thought were the lines of class authority among the American elite. Normally you’d think that [Goldman Sachs CEO] Lloyd Blankfein et al. could go and sit these Republican backbenchers down and remind them of their class duty. But that doesn’t seem to be happening this time.

A couple things. I do think that we have this broad kind of rot at the top end of our society: It’s devolved from a real ruling class, with some distance from day-to-day moneymaking, into something more just like a pure plutocracy, interested in maximizing its cash in as short a time as possible, and really not capable of thinking about policy in a serious sense. The Financial Times has been writing about how groups like the Chamber of Commerce, who normally would put pressure on the difficult Republicans, don’t seem to be willing or able to do that -- and one of the reasons is that they’re so enamored of the tax-cutting side of the Republican Party that they don’t really want to stop things like the government shutdown, or they don’t have the capacity to stop things. It does seem like there’s a breakdown at the elite level of society.

But also, Michael Lind had an interesting piece about how the roots of Tea Party are in a Confederate, almost kind of a neo-Confederate structure of people who want to preserve their class privileges -- very much articulated through race -- and they are a very, very sizable portion of the Republican Party. And what they see -- and this is also confirmed by the focus groups that David Greenberg et al. did -- the core of this is a group of people that feel like the country is being taken away from them by a new minority-majority country. And all of their familiar touchstones are being smashed. They feel like they’re fighting a heroic kind of lost cause, and they’re willing to do a  lot of damage to try to get their way.

You’ll hear some conservatives argue that the Tea Party represents a different politics, less “pro-business” than the GOP we knew – instead, consistently committed to “limited government” in ways that can be counter to business interests. To what extent is that just spin, or a real divide?

It’s a kind of regional and inter-class battle. I think, to use the Marxist language, [the Tea Partyers] represent an enraged provincial petit bourgeois that feel that they are seeing society change in ways that they don’t like. They look at things like Obamacare and see that as a way of subsidizing a minority electoral bloc that will push the government in ways that they don’t like. These are the small-town worthies, like the local car dealers -- people who are millionaires, but not billionaires. They are big wheels in their local communities, but not on a national level. And then you have ideological right-wingers like the Koch brothers who use these folks very effectively.

How severe do you think the tensions are between the perceived interests of that group and the business interests backing the GOP? Is that something that will intensify?

To some degree the Big Business interests are paying a price for having relied on these characters in the first place. The last thing that Big Business wants to see is something that threatens the status of Treasury bonds. They don’t want to threaten the status of the dollar as reserve currency. They don’t want to rock the image of the United States as the most stable capitalist power in the world. Even though the financial crisis essentially originated here, money still flowed to the United States then because it seemed safer than everywhere else. The big boys don’t want to endanger that status.

Even a technical default might not have immediately disastrous consequences, but it would certainly erode that perception of the U.S. as a safe haven. I think they understand it would reduce the status and power of the U.S. in the world, and they don’t want to see that. I don’t think the Tea Party people particularly care about that.

What does the apparent possibility of a default reveal about the state of our economy?

The fact that it’s even a possibility is just surreal. The American elite has lost control, or is losing control, of some of the core mechanisms of its power. And I think the rest of the world must watch with jaw hanging down. And I think a lot of the Tea Party types either don’t care about the risk of default, or don’t believe that anything serious can emerge from a serious default.

Which “mechanisms of its power”?

The Treasury bond market is at the core of American financial economic power. It’s the gold standard of the global securities markets. It’s the safe haven in times of trouble, and if that safe haven loses some of that safe haven status, something happens to U.S. power in the world. I’m no fan of empires -- I’m not saying this would necessarily in the long term be a tragic thing.

But it would promote an awful lot of disorder, and quite possibly a global financial crisis, and another return to deep recession. So there’s that. The consequences of default could be quite tumultuous.

Are there consequences you think have been missed?

We don’t really know what the consequences of this thing are; there may be all sorts of mysterious derivative products that are dependent on the continuous payment of U.S. Treasury interests. And if they go bad, we could have a chain reaction of failure and seizure we couldn’t even forecast yet.

The discussion that’s gone on so far about the stock market being key to a resolution – what does that show about the role it plays in American politics or culture?

The financial markets are really core institutions of class power. The stock market doesn’t really provide much in the way of investment capital; it’s a way of organizing ownership and staking claims over the profits of large corporations. And bond markets as a way of exercising leverage over government policy, from the municipal level to the national level. When prices go down and interest rates go up, it’s generally a call for government to be more orthodox in terms of the financial markets.

We hadn’t really seen much of a reaction in the financial markets until very recently. I think they figured that everything would work out, but now they seem a little more nervous that everything won’t work out. So the financial markets are trying to exercise their leverage over power, but not quite sure if all of the backbench Republicans are going to listen to it now.

There’s been some media speculation amid these showdowns that we could see Big Business shifting some support and attention back to Democrats. Do you think there’s a real trend there?

If Boehner’s not able to rally the troops finally, or has a very difficult time doing it and has a lot of turmoil around it, I think business will look to the Democrats as more reliable partners, sure.

Look at what Obama would like to do: Obama would like to keep the government funded and keep us paying interest on our Treasury debt. But he would also like the old Bowles-Simpson “Grand Bargain” of cuts to Social Security and Medicare. He came into office talking about that, and he hasn’t really lost his drive to do it. So he’s got what is essentially an orthodox austerity agenda, which would please most of the mainstream parts of Wall Street and the Fortune 500.

And on the other side, you’ve got these Republicans. Maybe the leadership is fairly rooted in reality, but you have 40 or 60 of them who -- to the business mind-set and many other people as well -- look completely bonkers.

They will just begin to see the Republican Party as an unreliable partner -- they’ve caused nothing but turmoil, and they may have outlived their usefulness. They were very useful in getting tax cuts and deregulation, but the Democrats are now pretty reliable on that agenda -- not tax cuts, but deregulation and business-friendly policies and austerity and budget-cutting and all that sort of stuff that business interests like. It may just make the Democrats look more and more like a saner, more reliable partner. And people who are not allied with Big Business, the traditional Democratic electoral base, will have nowhere else to go.