"What the hell was the sense of the election?" Bernie Sanders asks us. Plus: His nagging fear about Social Security 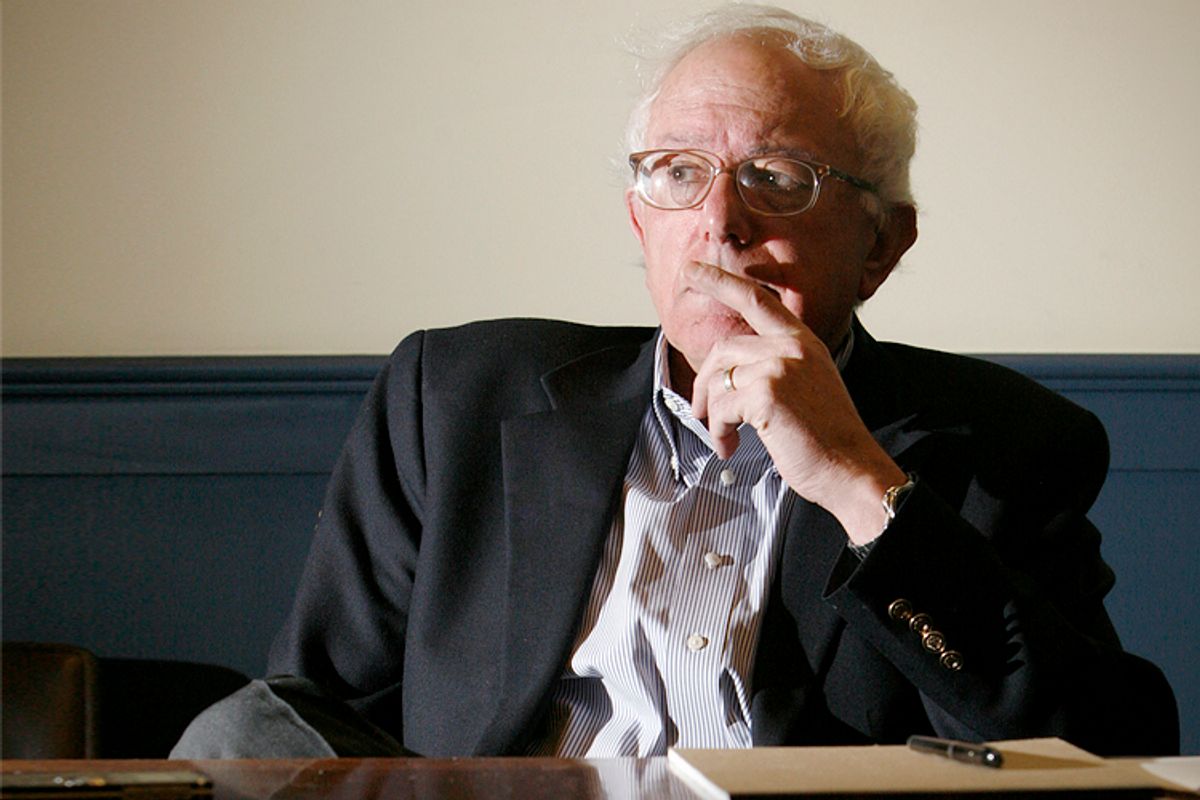 Bernie Sanders is the former mayor of Burlington, Vt., an advocate for campaign finance reform and single payer health insurance, and the only avowed socialist in the U.S. Senate. In a Wednesday afternoon interview, he urged Americans to “rise up” against an “absurd” Social Security cut backed by President Obama, and slammed Republicans for mounting “a severe attack on democratic government” aimed at “annulling” Obama’s reelection. What follows is a transcript of our conversation, edited slightly for clarity.

You’ve called for the president to invoke the 14th Amendment on the debt ceiling. [Obama repeated Tuesday that he won’t.]

Let me just say this. I disagree very strongly with the president in terms of his suggesting that he would never use that option. It is questionable, there are people who disagree with whether the president has the authority to use the 14th Amendment to pay our debts. But you have lawyers who believe that he does. And interestingly enough, you had Bill Clinton in 2011 saying very clearly that he would without hesitation use the 14th Amendment. So I think that what the president has done is taken away, whether he ends up using it or not -- what he has taken away is a tool that gives him some leverage in this discussion with the Republicans. I just don’t understand that at all.

So I think if the Republicans intend, for the first time in the history of our country, to not pay our debts and drive this country and the world into perhaps a major economic downturn, I certainly believe that the president should retain as an option using the 14th Amendment and paying our debts.

The argument, for example, that Paul Ryan is making today in the Wall Street Journal, that it’s not unusual to want some concession to go together with the debt ceiling increase – what do you make of that?

No, I think that that’s nonsense. Look, the Congress always has debates, and obstructionist tactics have always been used. But what Republicans do is they keep raising these tactics to unprecedented levels. For example – and I speak as an Independent, but I think any objective observer would agree with me. Have Democrats required 60 votes, or attempted to obstruct what Republicans wanted to do in the Senate? The answer is yes. Have Republicans been far, far, far more obstructionist since Obama has been elected president than at any time in the history of our country? The answer is yes.

What has historically happened is people said, “Yeah, OK, we’ll use the debt ceiling as leverage.” But always there was the assumption between leadership that at the end of the day, you would not default on your payment because of the cataclysmic impact that that would have.

The Republicans are forcing this government shutdown, which is causing enormous pain in this country. So I think that the answer is that what Ryan is saying is not accurate. That while yes, there have been discussions and debates and all of these other things, there has never been – that’s not my view, I mean you can ask what Wall Street thinks and what the Chamber of Commerce thinks – the kind of threats we’re now seeing, which could destabilize our economy and the world’s economy.

And how worried are you that there actually would be a debt default?

Well, you’ve got a lot of factors going. Am I worried? Yes, I am worried. I can’t tell you that it will happen or not. But you really have people who live in another, in an ideological world which is very far removed from where I think most Americans are. And they believe so strongly, they hate Obama so much, and they believe so strongly in their views that if it means driving this country or the world into a recession or a depression, that from their point of view is a small price to pay to continue their efforts.

How worried are you that the president is going to seek and secure a deal that would cut Social Security or cut Medicare?

Well, I think, interestingly enough, if you read Ryan’s much-discussed Op-Ed today, what is really quite astounding about it is ... he ran for vice president of the United States. He lost the election by 5 million votes. So it seems to me that it is incredibly audacious and incredibly outrageous [that] somebody who runs on an agenda and a platform, who loses by 5 million votes … then says, “Oh, by the way we will shut down the government, and maybe not pay our debts, unless you give me the program that I ran on and lost by 5 million votes on.”

So it is unacceptable. And the point here -- and I think Obama has made this point -- is that if you surrender on this very important issue -- and the issue, it’s not Obamacare. It’s not Social Security. It is really a severe attack on democratic government. It is in this case annulling the election results of 2012. And if Ryan gets everything that he wants – the Republicans are able to get the Keystone pipeline, and cuts to Social Security, and cuts to Medicare and Medicaid and everything else, what the hell was the sense of the election, when the American people said, “No, that’s not what we wanted.”

So it is a very dangerous precedent. And I agree with the president when he says … if we surrender to this, it will come back next year, and the year after. It will impact future presidents. And it really will make elections and real debate on issues much less significant.

When the president emphasizes his willingness after the debt ceiling is dealt with to make changes to so-called entitlement programs, how concerned are you about that?

I am very concerned about that. But that’s nothing new. The president, as I think every observer knows, has changed his mind with regard to Social Security. When he ran for president in 2008, his proposal for Social Security was to raise the cap. So right now, if somebody makes $100 million a year and somebody [else] makes $113,000, they’re both contributing the same amount into the Social Security Trust Fund. What Obama ran on in 2008 is to lift that cap, and that was his approach toward keeping Social Security solvent for the next 50 to 75 years. I agree with what he said in 2008.

Since that point, for whatever reason he has adopted this absurd proposal for a “chained CPI” which would make very significant cuts for seniors, people with disabilities, and disabled veterans in terms of the COLAs [cost of living adjustments] that they receive. So am I worried that at some point the president will reach some agreement with Republicans? Yeah, I am worried. I was just three hours ago at a rally in front of the Capitol in strong opposition to that.

So yes, I am worried. And I hope the American people rise up and say very clearly that at a time when we’re seeing more and more wealth and income inequality, where the rich are getting richer while the middle class is disappearing, that we do not go forward by doing what the Republicans want, which is more tax breaks for millionaires and billionaires and cuts in Social Security, Medicare and Medicaid. And I am worried about that.

And we’ve got to take one fight at a time. And right now the fight is to have Boehner allow a vote in the House, reopen the government, not default on our debt. And then the next day, I and others have got to do everything that we can to make sure that we do not see cuts in Social Security.