Shut up, Starbucks: Your political stunts are a joke

The coffee giant is getting great press for its latest political stunt. It doesn't deserve it. 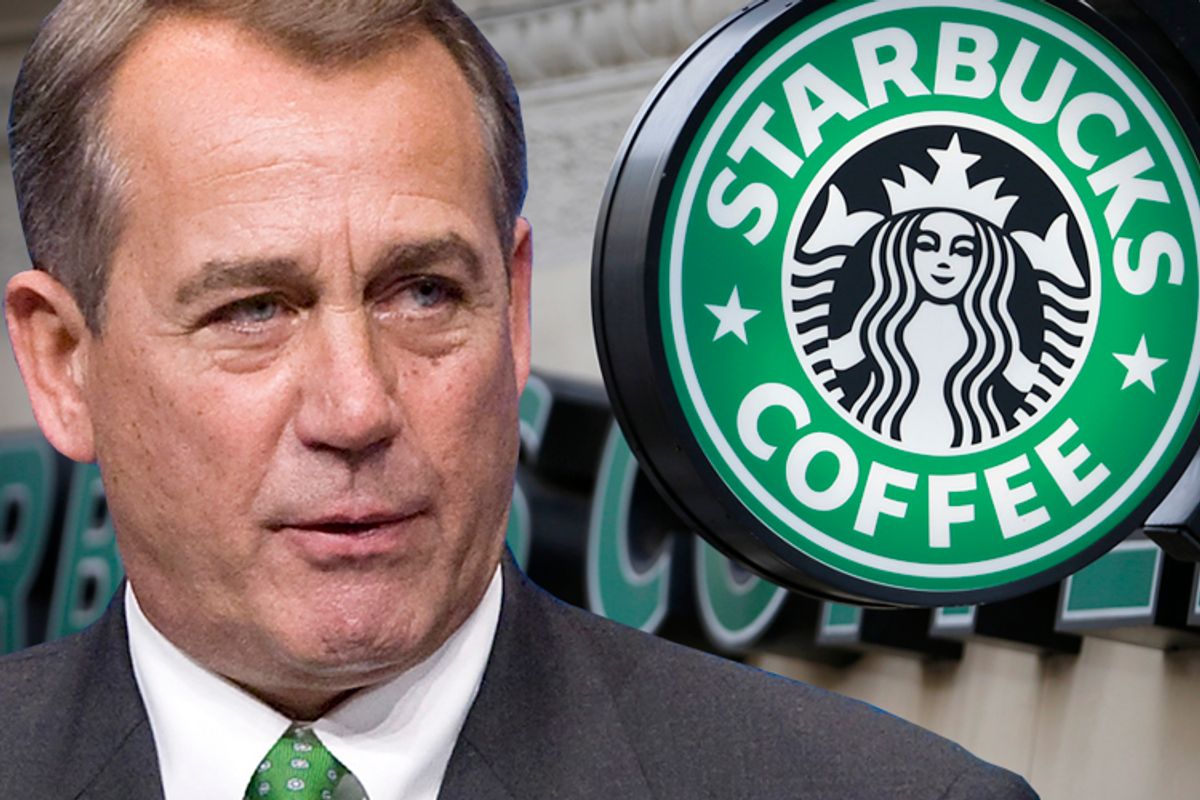 As you may have heard, the federal government has been shut down for 10 days. But perhaps you’ve yet to notice that said shutdown suspended the “We the People” petition website, perhaps most famous for allowing Americans of all stripes to secure a White House response to demands for a Death Star, or secession. According to Starbucks CEO Howard Schultz, the defunct petition site “says everything about the irresponsible and untenable situation our political leadership has created across America.” Schultz wrote Thursday that he’d reached “the sad and striking realization that the American people have no platform with which to voice their frustration with Washington and the current stalemate that threatens our nation.”

Enter Starbucks. Starting today, Americans can go to a store, a dedicated website or the company’s Facebook page to sign a petition urging politicians to reopen the government, pay the debt on time, and “Pass a bipartisan and comprehensive long-term budget deal by the end of the year.” The company is backing the petition with ads running in the New York Times, The Washington Post, The Wall Street Journal and USA Today. (Salon can confirm the presence of a petition at the Starbucks location a block from our New York office.)

Starbucks has not so far offered a private-sector alternative to the shutdown-threatened Special Supplemental Nutrition Program for Women, Infants, and Children (WIC).

Not everyone is excited. “I’m really scared that there’s a move in American culture to treat business owners that don’t even pay their employees enough to eat as if they’re better leaders for the country than elected politicians…” Madison, Wis., Starbucks employee and Industrial Workers of the World union activist Zee Lemke told Salon. “Howard Schultz is rich because of the work I do, and I don’t want him to use that power to pretend he’s better than the leader I actually voted for.” The company did not respond to an early morning request for comment.

Today’s petition is Starbucks’ second shutdown stunt of the week. On Tuesday, Schultz announced that this week anyone who bought a Starbucks beverage for someone else would get a free “tall” (meaning small) coffee of their own. That was designed to spur Americans to “support and connect with one another, even as we wait for our elected officials to do the same for our country.” Call it the “Starbucks Summit.”

“I don’t pretend that both parties are equally to blame for this crisis,” Schultz wrote in a Monday “Call for Civility and Leadership.” “But, I do think they are equally responsible for leading us to a solution.” Schultz urged Americans to “start by pushing for solutions and speaking out against posturing and blaming.” Leading by example, the Starbucks CEO did not mention which party might be more “to blame for this crisis.”

Schultz told USA Today Thursday that over two days he’d spoken with the CEOs of the majority of Dow Jones Industrial Average companies, and found total agreement “about concern and need for the American people to be heard.” Eschewing false modesty, Schultz asked fellow business leaders in a Thursday open letter to sign his petition and to “join us in doing what you – and your companies – can to give the American people the voice they currently lack, and are desperately crying out for.”

But while Schultz offers up his services as a tribune of the otherwise voiceless, the “long-term budget deal” he's seeking may not be one most Americans want. In a December blog post, Schultz bemoaned politicians’ failure to “come together and compromise to solve the tremendously important, time-sensitive issue to fix the national debt.” Schultz directed Americans to check out www.fixthedebt.org, the website of the Pete Peterson-funded, Bowles-Simpson-founded deficit hysteria group peddling “entitlement” cuts.

That’s a more attractive proposition for a billionaire CEO than a Starbucks barista. But, as I noted in January, Schultz’s signature move in the fiscal cliff standoff was to conscript his employees to advance his politics (and Starbucks’ above-the-fray, ahead-of-its-time political brand). In the lead-up to the so-called cliff, Starbucks had its rank-and-file D.C.-area employees write “Come Together” on each coffee cup – an effort, in Schultz’s words, to “use our company’s scale for good by sending a respectful and optimistic message to our elected officials.”

That “Come Together” effort came a year after Starbucks kicked off another initiative framed as a common-sense solution to a national dilemma: its “Create Jobs for USA” initiative, in which a $5 donation to a loan fund earns you an “Indivisible” wristband and the chance to “help get to this country back on its feet.” Asked at the time about Starbucks’ economic diagnosis – that a lack of credit access for small businesses was hampering job creation -- economist Dean Baker called it “bizarre,” and told me “I just don’t think there’s any evidence to support that.”

Cynics might ask how well Starbucks’ advocacy for “Fix the Debt” solutions gels with its stated concern for job creation. Others could contrast the company’s call for collective activism and economic uplift with its firings of workers who tried to organize with the IWW. Lemke told me that Schultz’s employees’ own petitions to management were often ignored or cause for punishment. “If he wants our elected leaders to be democratic leaders,” she said, “maybe he should set an example.”

Despite Starbucks’ best efforts, Washington’s shutdown/ceiling showdown remains unresolved. On Monday, Schultz promised “actions in the coming weeks to galvanize our customers, inspire our people and encourage the communities we serve to come together to take care of each other.” After two stunts this week, that begs the question: What’s on tap for next week?