"Captain Phillips," the shutdown and American nationalism in decline

Is Tom Hanks' "Captain Phillips" a paean to red-state nationalism -- or just a casualty of our crazy politics? 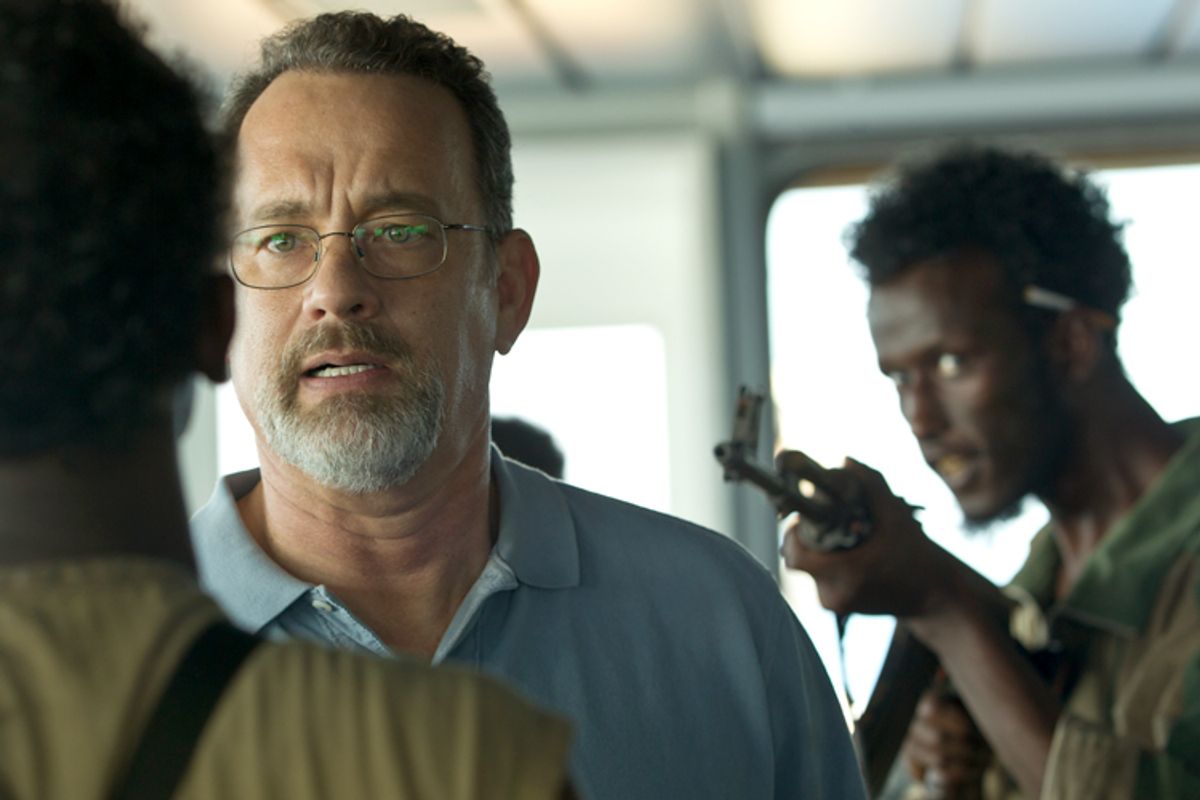 I feel pretty sure that Tom Hanks, director Paul Greengrass and screenwriter Billy Ray had no conscious intention of wading into America’s culture wars when they made “Captain Phillips,” which opens in theaters this weekend. Not that a movie’s political meaning is dictated by those who made it, but Hanks is a prominent Hollywood liberal, Obama supporter, electric-car environmentalist and supporter of marriage equality. Greengrass is a former investigative journalist from England, whose films have had a strong component of muckraking and anti-authoritarianism; his 2002 “Bloody Sunday” helped drive the British government toward an official apology for a 1972 massacre of civilians in Northern Ireland. “Captain Phillips” was first and foremost a chance to make an exciting thriller based on dramatic real-world events, those being the 2009 hijacking of an American freighter by a small group of Somali pirates, the subsequent rescue of the ship’s captain, and the killing of three pirates (and arrest of another) by the United States Navy.

But in our current climate of American nationalism under siege, when the hyper-patriotic right defines itself in opposition to a twice-elected president (and the clear will of the majority), and appears ready to embrace the nihilism of a government default rather than surrender its imaginary principles, everything becomes symbolic. “Captain Phillips” is about dark-skinned men with guns from a screwed-up country in the developing world – one whose problems we really don’t want to examine too closely – who inflict pain and suffering on a white American everyman and are crushed, with implacable efficiency, by the greatest military force the world has ever seen. Even if the film wasn’t intended as an inspiring patriotic fable – and some critics have detected countervailing tendencies – it shouldn’t surprise anyone if American nationalists devoted to the principle of their own Christlike victimization have seized upon it.

Whether the right-wing fervor for “Captain Phillips” that has emerged on social-media platforms and comments forums (including Salon’s) will be enough to make the film into a red-state box-office hit remains to be seen. (It will apparently be no better than the No. 2 movie this weekend, behind the outer-space adventure “Gravity,” which has little or no legible political subtext.) Of course fans of a given film or star or director complain when a critic gives their darling a bad review, but it’s highly unusual for a Hollywood movie to be immediately tinged with political discord the way this one has been. Much of the abuse I’ve gotten on Twitter and elsewhere for my mixed-to-negative review of “Captain Phillips” hinged on the proposition that I was a pirate-loving, anti-American traitor, and a surprising amount of it invoked the names of Harry Reid and Barack Obama, as if they had anything to do with the film or had not enthusiastically endorsed the 2009 military operation. In other words, this isn’t really about the movie or the real Capt. Rich Phillips or Somali pirates at all. It’s about the crazy climate of American politics right now, and the long-standing American need to draw up sides, to pick heroes and villains.

All forms of nationalism rely to a large extent on tales of noble heroes and dastardly villains. Russia has Taras Bulba and Alexander Nevsky; France has Joan of Arc. Shakespeare’s great history play “Henry V” is best understood not as history but as the creation of a national myth about the embattled masculine fortitude of England in the face of effete and effeminate France, a myth that endured at least into the 20th century and arguably lingers to this day. Come to think of it, maybe it’s just imperial powers, along with the subject nations long oppressed by them, that depend on this kind of legend-building. Does Finland have a national hero? (I know about their semi-concocted national epic, “The Kalevala,” though I haven’t read it.) Does Canada?

I guess Americans will always have George Washington, a figure of implacable rectitude who has survived all efforts to demolish him. Long embraced by the right as a tedious avatar of manly virtue, Washington today looks better and better from the left, especially in comparison to former liberal hero Thomas Jefferson, the eloquent eccentric, money-grubbing hypocrite and unacknowledged father of numerous enslaved children. (Of course Washington was a slave-owner too, but he always held the personal view that the practice was morally indefensible and, unlike Jefferson, freed all his slaves upon his death.)

What makes American nationalist mythology distinctive, or very nearly so, is the exaggerated importance of the villains. The New England Puritans needed the devil, out there in the woods seducing young girls. Cowboys needed Indians, whose alleged bloodthirstiness became an ex post facto justification for Manifest Destiny. For most of the 20th century, American identity clear across the political spectrum was defined by the Communist threat, which even many liberals understood as an invisible global fungus whose spores could sprout anywhere. That consensus cracked apart with a dramatic flourish in the 1960s and ‘70s, and much of the enduring cultural bitterness from those years reflects the deep-seated American yearning for a clear-cut moral dichotomy between good and evil. (I was startled by the letters I got after interviewing Jane Fonda – in 2012 – but I really shouldn’t have been.)

Despite triumphalist rhetoric from conservative intellectuals about the “end of history,” the period following the fall of the Berlin Wall was an awkward one for American nationalism. Being the lone superpower in a cowed and subservient world was not good for morale, it turned out. I don’t actually believe that the Straussian neoconservatives of the George W. Bush administration cooked up al-Qaida or the 9/11 attacks – bring it on, truthers! – but they seized upon those events immediately as the impetus for a reborn nationalism. I remember flying somewhere during the tense weeks after 9/11 and overhearing a couple of business-traveler dudes at the baggage carousel, excitedly discussing how “we” were going to take out Iraq, Iran, Syria, Afghanistan, Sudan and whatever other rogue nations took our fancy. Be careful what you wish for, guys.

After a dozen years of low-level worldwide warfare that has virtually bankrupted us, done far more damage to America and the world than the 9/11 attacks themselves and enabled the creation of a super-secret national-security state on a previously unimaginable scale, the nationalist project is once again in disrepair. Islamic terrorism made an effective boogeyman for a fairly long time, but the public appetite for endless war has pretty much evaporated and the far right’s anti-Muslim hysteria has not proven contagious on a large scale. Extreme nationalism thrives on a Manichaean, black-and-white worldview, and in the age of Obama the global situation has grown excessively murky and complicated. Have the government’s high-tech global spy networks kept us safe from terrorism, as we are repeatedly assured, or simply driven us closer to a consumerist police state than ever before? (These are not mutually exclusive possibilities, of course.)

I suppose the story of “Captain Phillips” will strike some people – especially when they haven’t seen it – as an example of “clean” nationalism, an opportunity to cheer U.S. military superiority and the killing of random foreigners without guilt. But as I wrote in my initial review, the immense asymmetry of the conflict presented in the film is unsettling, perhaps intentionally so: Billions of dollars worth of military hardware and hundreds of well-trained, well-fed troops on one side, four malnourished villagers (one of them roughly 15 years old) with black-market Kalashnikovs on the other. These guys make piss-poor movie villains, let alone existential threats to freedom and democracy. It’s a little like watching a game between the Pittsburgh Steelers and a team of third-graders from the suburbs, or cheering for Microsoft to sell more software than some dude writing open-source code in Latvia. While I draw no moral comparison between the Somali pirates and Edward Snowden – the pirates were low-level parasite capitalists, harried by their bosses and strictly out for cash – their relative scale, and their relationship to power, were about the same.

While Manohla Dargis of the New York Times liked “Captain Phillips” a lot more than I did, she makes the valid point that Greengrass uses the presentation of sheer visual scale to ironic or disorienting effect: The tiny human figures of the Somalis against the great bulk of the Maersk Alabama, Phillips’ enormous cargo vessel; the tiny lifeboat in which the pirates try to flee against the overwhelming might of a fleet of Navy warships. The distinctive American brand of nationalism has always depended on a critical misreading of scale, and on the equation of superior might with superior virtue. The devil is perverting the young; the Indians will skin us alive and take our women; the State Department is run by Commies and homosexuals; Harry Reid and the movie critics will hand over all the true Americans to gay Somali Obamacare death-panel pirates. So any level of force used to combat these evils is by definition justified. Someday, “Captain Phillips” will just be a capably crafted thriller again (though not the best one of Greengrass’ career). Right now, it’s an accidental document of American nationalism in its decadent, terminal decline.