No, there isn't a "New American Center" 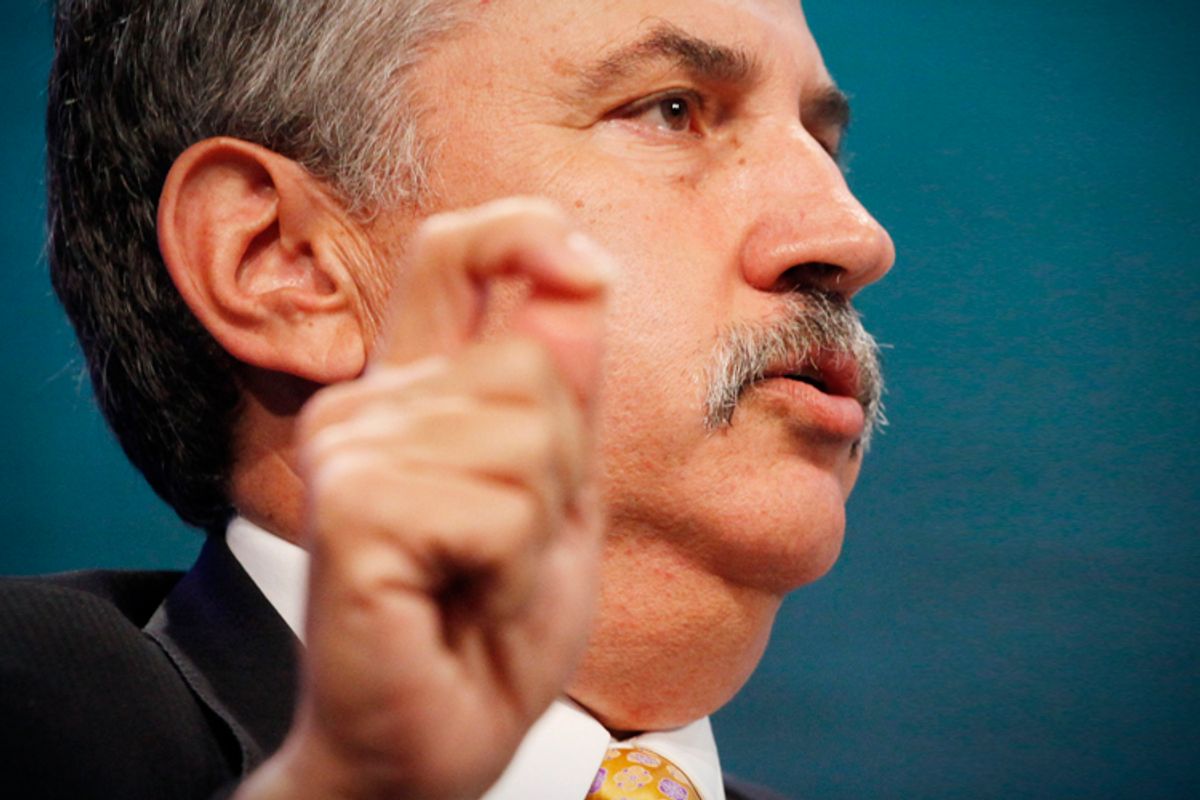 Esquire, a magazine about fancy clothes and ordering drinks like an asshole, has teamed up with NBC News to poll a bunch of soft-liberal white voters. They discovered that those voters exist, they're white, and they're a bit liberal. This proves that the country is not divided. You can't argue with all these charts and graphs! Even when the charts and graphs don't prove anything, let alone what the words introducing them claim.

An exclusive Esquire-NBC News survey shows us that everything we are told about politics in America today—that there is no middle ground between left and right, blue and red, us and them—is wrong.

The much-exaggerated death of the center can be traced to the 2000 presidential race, and its famous election night map: the endlessly red heartland, bracketed by blue on the coasts. Pundits rushed in with polls and data, declaring the arrival of two tribes driven apart by geography, cultural and cynical campaigns.

No one was claiming that America was strictly divided between dedicated arch-leftists and reactionary right-wingers. That's only a thing dumb pundits ever said and not even very many of them said this, because most of them have spent years running around talking about the importance and size of "the center." And when you look at the actual poll results, it's clear that this "new American center" is mostly soft-liberal Democrats, some of whom refer to themselves as Independents, lumped together with some conservatives who don't share many of the same beliefs but who aren't as conservative as the far right.

Based on respondents' answers to our survey, the statisticians and analysts identified eight distinct ideological segments within the U.S. population, each with its own defining values, beliefs, and lifestyles. Among those eight segments, there are four that occupy what the survey has determined is the center of the ideological spectrum.

These four segments apparently make up 51 percent of the population, according to NBC's write-up of the poll, and that would be pretty significant if the poll indicated that these four centrist segments actually shared a set of coherent and compatible beliefs, except that the poll doesn't show that, because  [UPDATE: I badly misread the result here and didn't include soft support. Apologies for the error.] This group thinks "government spending" in the abstract is wasteful and bad -- because everyone has been trained to believe that by elites in both parties! asking generically about "government spending" is an idiotic waste of time! -- but they generally support social insurance spending and progressive taxation and even Pigovian taxes on polluters. (I mean, the more liberal people in this group do, because it's not one ideologically consistent set of voters, it's a couple different groups with different and in fact often contradictory aims.) So a plurality of a bare majority of people agree on some stuff, which just goes to show that everything you think you know about politics is wrong. This nation is simply not divided as you think, according to this survey that purposely excludes 49 percent of Americans for being too partisan!

The entire thing is a mess. Many of the questions seem designed to shovel people into a comfortable middle between two rhetorical extremes -- do you support ALL abortion, NO abortion, or SOME abortion? -- and others just ask people to agree with the sort of inchoate expressions of political independence that Americans have always been attracted to, until the minute they actually step into a voting booth. Like: "When it comes to politics, I often agree with some ideas that Democrats have and some ideas that Republicans have." That certainly sounds reasonable. An impressive 58 percent of respondents agreed! Yes, that's right, only 58 percent. A quarter of respondents disagreed and 18 percent were "neutral." 18 percent of 51 percent of Americans in the center are neutral on the subject of whether or not they sometimes agree with ideas from both parties. Go back to bed, NBC and Esquire, these are nonsense questions.

Did you know: "The middle" is very white and it's terrified of its declining privilege. Esquire puts it a bit more diplomatically:

Compared with voters who make up segments further to the left on the spectrum, the Center is much less ethnically diverse. Though it's impossible to attribute any direct causation, there also happens to be a clear lack of support in the Center for issues typically related to diversity.

Well, you know, maybe there happens to be a clear lack of support in the Center for diversity because you have excluded people of color from your definition of the Center.

Important #brands have things called "media kits" and the purpose of a media kit is to show advertisers that important (rich) people care about this brand. Any major media organization's media kit is basically supposed to prove conclusively that white people who make a lot of money read this magazine or blog or newspaper. This poll is a bit like that. It seems like marketing for NBC and Esquire -- we represent the sensible (and probably affluent) center! Don't be scared of our political content, advertisers!

But it's not strictly marketing -- it is clearly very psychically important to the elite political media that a reasonable center exist. A common-sense, centrist middle is an essential, foundational myth of the nonpartisan press. And hey,here's Politico's Dylan Byers, right dead in the middle of the middle. The survey, Byers and Hadas Gold say, "provides a refreshing alternative to the usual categories of political identification." And it "provides an opportunity for us to be transparent about our own political views." They are in the middle. Everyone is in the middle. There is only the middle. Everything else can be safely discounted as non-middle and thus unserious and unimportant.

This will come as a shock to our conservatives and liberal critics, but reporters are as capable as doctors of putting aside personal views in order to get the job done.

Haha, no. No. You don't understand ideology. "The middle" is not an absence of ideology and it is impossible to write about politics (or anything!) without the influence of ideology.

But let's look at this "Center" more closely in terms of actual policy, to see whether this "Center" looks like the imagined "Center" of a Sunday show panel guest. This "Center" has dumb beliefs about "government spending" and a "balanced budget" because those issues are generally explained poorly and constantly lied about, but it is well to the left of the Washington consensus on specific economic issues. This "political center," which is, again, primarily (but not entirely) a soft-Democratic white plurality, supports raising the minimum wage, hiking taxes on millionaires (59 percent support!) and taxing carbon emissions (yes, a carbon tax polled well in a survey of "the Center"), and financial regulation. We're definitely still a center-right nation as long as you only pay attention to vague beliefs about the importance of balancing the budget and ignore the strong national desire to soak the rich.

This poll -- or, more accurately, the packaging of the poll -- isn't just dumb, it's actively obfuscatory. There isn't a "middle" directly between the two parties. There are blocs of voters who vacillate between the parties -- or, more often, don't vote -- because the parties don't represent their interests. Pew has done more complex and useful analyses of the American electorate five times over the last 20 years. One of the things they found most recently is that "the Center" -- the few groups not specifically aligned with one of the parties -- aren't a group, or groups, in the "middle." They're actually a few groups with very different preferences. One group in the middle is largely working class, socially conservative and economically populist -- there is no party for them, sorry -- and another group is much richer and, coincidentally, vehemently opposed to welfare spending but pro gay marriage and stuff (they are Democrats who will vote for Christie). The "New American Center," like the rest of America, is made up of rich people whose preferences are generally reflected by both parties, and poor people served by neither.