Is it sexist to offer a pregnant woman a seat?

A pregnant politician stays standing -- and a feminist debate erupts 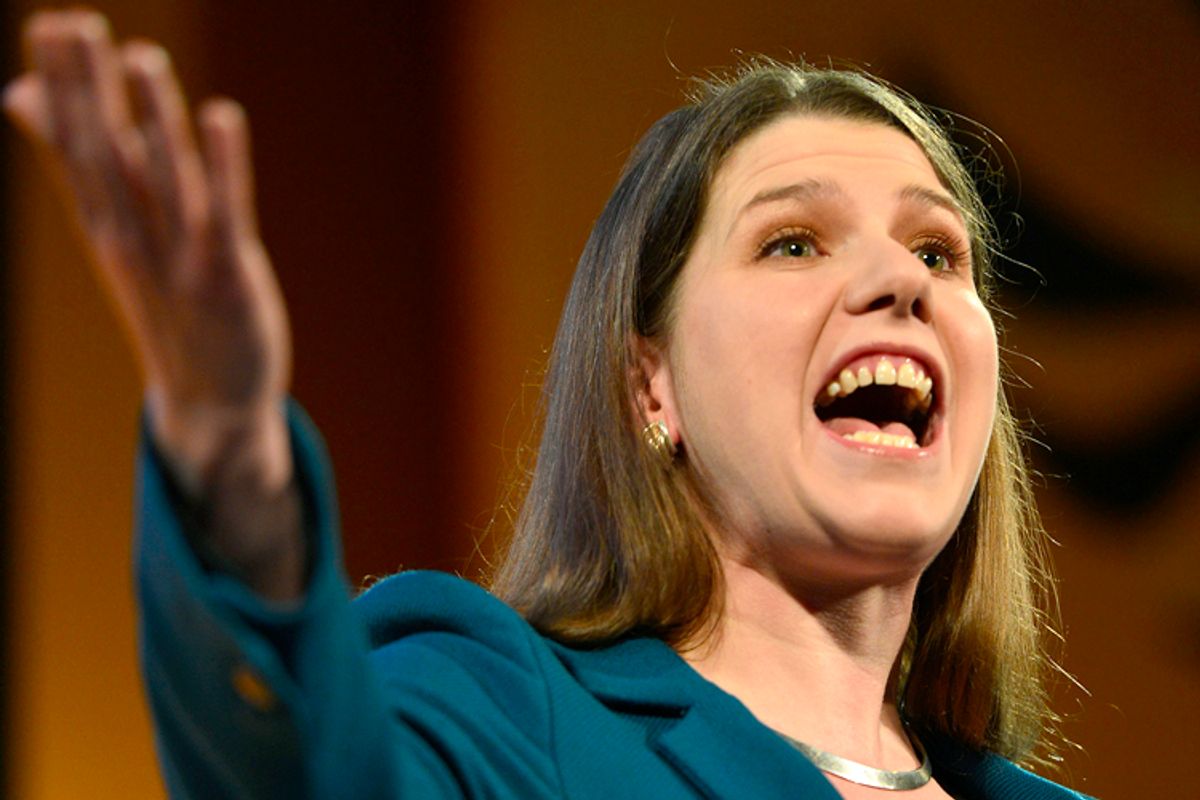 From time immemorial – or least the late '60s – one of the great criticisms leveled against feminism has been that it will somehow eradicate the basic niceties between men and women, dragging us all into a society in which the act of one human being opening a door for another human being will be condemned as a Tool of Oppression. And often, many of us who care about things like pay equity and not getting raped will respond to that charge with a great "Oh pshaw!" Then a huge row breaks out over whether or not to give up a seat to a pregnant woman and it's like, I guess this is the hill we'll die on today. Let's do this.

In London this week, during the most raucous, entertaining political show in the world -- "Prime Minister's Questions" -- Equalities Minister Jo Swinson, who is pregnant, spent the duration of the 30-minute session on her feet. The Spectator's political editor James Forsyth took note, declaring on Twitter, "Quite remarkable that no MP has offered Jo Swinson, who is seven months pregnant, a seat. Really shocking lack of manners and decency." An inevitable Twitter storm erupted, with some taking the view that "Wouldn't the offer of a seat offend?" while others decided that "Offering a seat to anyone with swollen ankled, loose ligaments, elevated blood pressure, carrying a 3st weight a seat isn't an insult." British politician Vince Cable was firm in his opinion on the matter, telling the BBC, "As a matter of basic consideration and good manners people should offer their seat to someone who's visibly pregnant. I'd have thought that was just automatic. The old tradition of men offering seats to women has long gone but I think if somebody is heavily pregnant or is disabled, basic decency suggests you should give them preference."

As sit-or-stand-gate kicked on with all the fury of a gassy fetus, the always questionably reliable Daily Mail jumped into the fray, quoting an anonymous source "close to the minister" herself who revealed, "The suggestion somehow that people should be outraged on her behalf is ridiculous. The idea that just because she is seven months pregnant she has lost all ability to stand on her two feet or fend for herself is quite sexist. She did not think it was an issue. If she had wanted to sit down she would have asked to sit. She is quite capable of fulfilling her functions as a minister – including standing and walking – while she is pregnant. She is not somehow severely incapacitated ... If she needed to have a seat, or had felt she wanted to have one, she would have been perfectly capable of asking." And, the source said, Swinson did not appreciate being characterized as "some sort of victim." The Daily Mail story is currently closing in on 2,000 comments.

Swinson's alleged attitude then drew the fury of Telegraph writer Cristina Odone, who unsubtly asked, "Does Jo Swinson hate women?" and fumed, "Trust a Lib Dem to find sexism in chivalry. It's the kind of petty thinking that betrays a small mind and a limited vision ... The MPs who failed to offer Swinson their seat should be pilloried – but so should she, for accepting their behaviour and thus setting a dangerous precedent. Other women, less healthy, older, or less sturdily built, may suffer the consequences of Swinson's views."

Eventually Prime Minister David Cameron himself had to get into the debate, issuing a statement via his spokesman that "Take the example of public transport - I think if you see someone who is in greater need of a seat than yourself I think offering that seat is a good thing to do, a decent thing to do," and adding that if  Cameron were in that situation, "I'm sure he would" give up a seat for a pregnant lady. But Swinson, who now stands accused of RUINING EVERYTHING NICE IN THE WORLD FOR WOMEN, apparently doesn't actually give a damn one way or the other. On Twitter Thursday, she joked, "About to get on the tube - seat offers welcome & definitely not sexist :o) But I was happier standing at pmqs yesterday." And on Friday she added, "Lovely things you could do for a pregnant woman today: 1.Offer her a seat. 2.Don't misquote her. 3.Make her a cup of (possibly decaf) tea."

Whether you're a pregnant woman or not, that's how you handle a situation like this. Not with the expectation that anything in life will granted to you, but with gratitude and good humor when it is. No scolding anybody for not offering a seat, no defensive, "How dare you?" if anybody does. Sincerely extending a little gesture that suggests an awareness of the comfort of others doesn't have to be taken as a sneaky, insulting ploy of the patriarchy, nor does not needing to accept said gesture need to be interpreted as a betrayal of both etiquette and womankind. Swinson, in her lighthearted response to the controversy has declared definitively that she is just fine with being offered a seat. But more important, she's demonstrated the true gift of feminism -- that you can be a successful politician and mother-to-be who doesn't need anybody's help in standing up for herself.