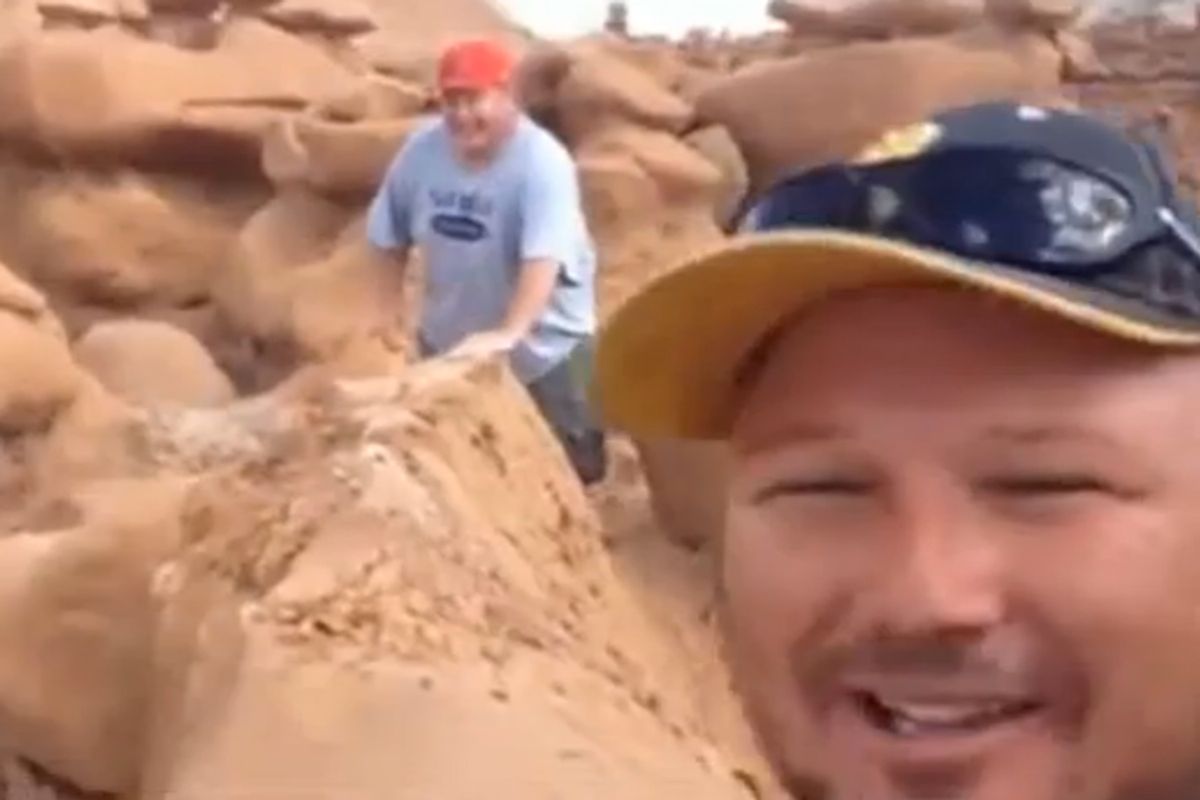 In case you thought the Boy Scouts weren't just trying to protect our innocent children from gay people, this week we learned that a rogue group of them have also isolated a different menace – really, really old rocks.

In a video that appeared Friday on Facebook – and might as well have been titled "People Are the Worst" -- a group of scout leaders who'd been on a trip to Utah's Goblin Valley State Park with a group of 14- to 16-year-old Boy Scouts can be seen toppling a boulder and then whooping it up. The formation the men knocked around was estimated to be about 170 million years old.

Dave Hall, the scoutmaster who filmed the video, told reporters this weekend, "This is about saving lives, one rock at a time." Hall claims that some of the boys had been climbing and jumping on the rocks when they noticed a large boulder was loose. "My conscience won't let me walk away knowing that kids could die," he said. "The thought that went through our minds was if this would have fallen while they were coming up that valley, up that very well-used walkway, numerous fatalities would have happened." He also boasted, by the way, that "It was a crazy, exciting moment." And Glenn Taylor, the leader who pushed the rock, echoed the sentiment. While he admits he wishes he'd contacted a ranger first, "As it is, I feel guilty because I have a conscience," he told reporters this weekend. "But my conscience also says I did the right thing ... We did something right the wrong way." State Park authorities are now conducting a criminal investigation into the incident.

In the video, the men don't carry the gravitas of a group of concerned adults protecting their young charges. Instead, after Hall motivates them by singing "Wiggle It," they high-five and cheer. "We have now modified Goblin Valley," Hall says. "A new Goblin Valley exists with this boulder down here at the bottom. Muscles over here pushed it off ... Some little kid was about ready to walk down here and die, and Glenn saved his life by getting the boulder out of the way. It's all about saving lives here in Goblin Valley." Taylor responds with a manly "Grrrr."

Taylor, by the way, filed a personal injury lawsuit just last month in which he claimed "great pain and suffering, disability, impairment, loss of life" stemming from a 2009 car accident. Alan Macdonald, one of the individuals Taylor is suing, told ABC News this weekend that "In the video I see a big strong guy who steps up to a 2,000 pound rock and dislodges it and I just think to myself, that guy doesn’t have a bad back."

You could isolate the video, with no other commentary or context, and it'd be a tremendous exhibit in the Hall of Human Hubris Gone Terribly Wrong. Nothing like a bunch of guys in shorts congratulating themselves for altering nature's Jurassic-era handiwork to make you question whether we really deserve our place in the food chain. Throw in the men's subsequent clueless comments, their tenacious insistence that they did the right thing, and you get Bonus Added Feature Stupidity. You certainly don't get a sense that these are Boy Scout leaders who've familiarized themselves with the organization's famed Leave No Trace policy.

But if you haven't had your fill of despair for our species, you'll never be disappointed reading the comments on YouTube. Right now there's a fight going on in the video's comments over atheism and whether or not evolution is a thing. SPOILER: The word "Nazi" makes several appearances. Adding extra stupid to the fire, Taylor and Hall have been receiving death threats. Because of course they have. Hall said this weekend that "I've got over 100 death threats on the Internet already." Reminder to the trolls: anonymously offering to murder people is not the moral high ground. Continuing to not get it, however, Hall added, "I've got people all over the world telling me they are going to kill me because I made the decision that lives are more important than this rock staying here a few more hours." Yeah, what's a few more hours when you're 170 million years old?

In welcome glimmers of appropriateness, Boy Scouts Deron Smith said Friday that "We are shocked and disappointed by this reprehensible behavior. The isolated actions of these individuals are absolutely counter to our beliefs and what we teach," Smith said. "We are reviewing this matter and will take appropriate action." And Eugene Swalberg, a spokesman for the Utah park system, said, "This is highly, highly inappropriate. This is not what you do at state parks. It's disturbing and upsetting … This is not behavior that is appreciated or should exist in state parks. This has been formed for literally millions of years, and it’s supposed to last for a long time. It doesn’t need individuals doing the work of Mother Nature."

What those scout leaders did in Goblin Park was unquestionably dumb, arrogant and dangerous. It's just dismaying that a vocal portion of the reaction has been even dumber, more arrogant and more dangerous. And if they handed out badges for being obnoxious, Taylor and Hall wouldn't be the only ones with patches on their chests today.