The ongoing obsession with black women's hair is now the stuff of art shows. One, in particular, raises questions 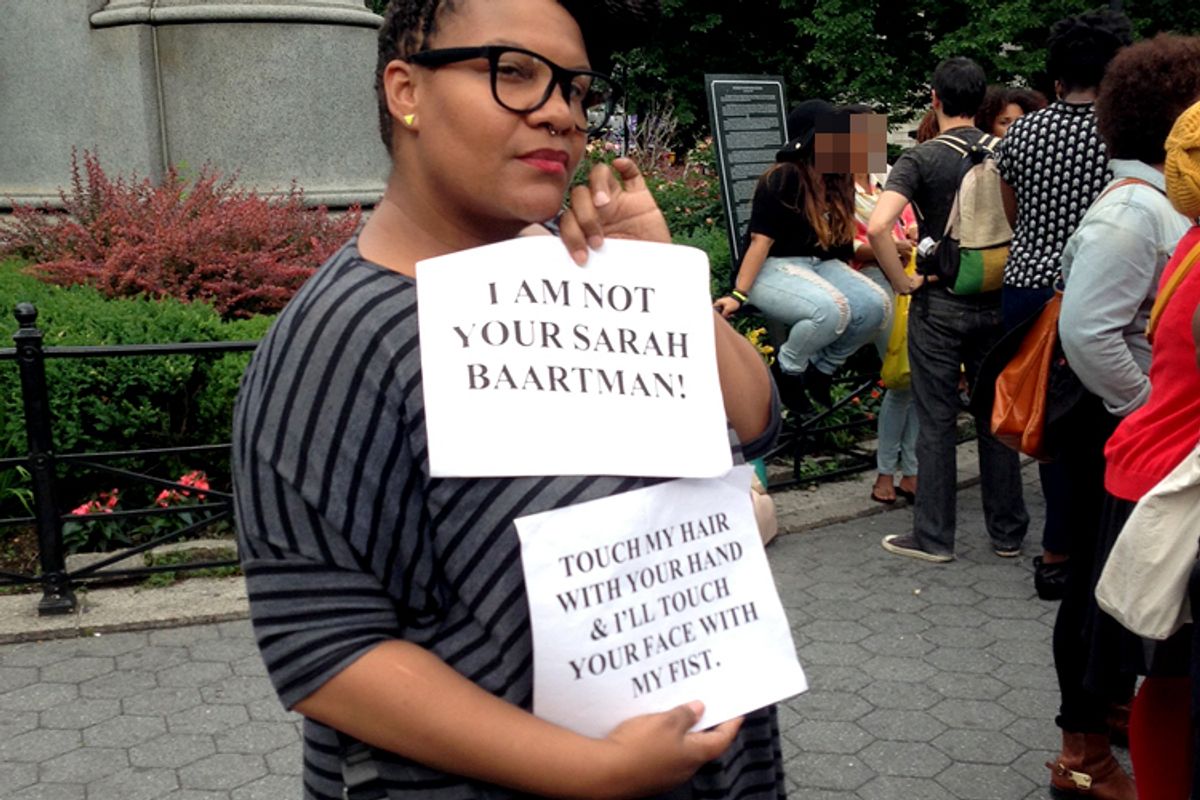 Pictures from a new exhibit by photographer Endia Beal called “Can I Touch It?” showcase several white women, all corporate execs, who agreed to get a “black hairstyle” and then have their portrait taken.

This project started when Beal began permitting many of her white corporate colleagues to touch her big red ‘fro, to pull it even, while she photographed them doing it.

Over the summer, a friend and I happened upon the “You Can Touch My Hair” exhibit that occurred in Union Square.

Incensed at such protests and convinced that the black woman who facilitated such a moment had no understanding of history or the ways that white folks fetishize black women’s bodies, I was incredibly happy to see the counter protests that emerged as well.

How dare the exhibit organizer put black women on display and then grant permission for touch? Yes, there is something to be said for making it clear that permission is required, but what are we permitting?

But I must admit that I had a wholly different reaction to the Endia Beal exhibit. I laughed. I laughed heartily. I laughed the slightest bit with these women, but mostly at them.

A few of my friends were mad that these were called “black hairstyles.” That feels a little bit culturally dishonest to me – no shade to the homies. There is a whole culture around black hair. The first black women millionaires made their fortunes from figuring out how to style and care for black hair. And back then we weren’t talking about ‘fros, but perms and, yes, like the white lady in these pictures, finger waves!

So though most of these styles were hot between 1985 and 1997, they are still black girl styles.

Anyway, I get why black women are uncomfortable. The fixation and demonization of our cultural style is a discomfiting thing. But I suspect that there is no exhibit, no version of this conversation other than one that drew a clear no-touching boundary and lambasted white folks for their continued ridiculousness that would make us comfortable.

In high school, a white classmate, someone I considered a friend, someone I knew came from a racist home because she told me that her dad didn’t like black people, sidled up to me in AP English and asked to touch my hair. I let her. She touched it and remarked, “It’s soft!” I looked at her and asked, “What did you think it would feel like?” “A Brillo pad,” she replied in earnest.

This is racial absurdity. Just because black people have used our disproportionate share of Brillo pads cleaning white people’s houses didn’t mean that our bodies magically morphed into the cleaning implements.

This is the kind of thing I wish I had said at age 17. But I simply went about my business. This kind of racism is to invoke Holland again, quotidian. Regular.

And it is the absolute absurdity of racism, the way it defies logic, that made me laugh at these photos. They are absurd in the most real way possible. They are Miley Cyrus trying to twerk absurd. They are Robin Thicke trying to approximate black male swag absurd. They are GOP obstructionists trying to play like they ain’t racists absurd.

Endia Beal hoped, I think, to cultivate a sense of white empathy and cross-cultural understanding, by facilitating opportunities for her white colleagues to experience black hair.

These days I’m wholly uninterested in facilitating the racial understanding of any white people, other than the ones I’m paid to teach. At the same time, I recognize that there are some black women who are more generous than I, who still see the value in breaking down racial barriers on an individual level, who recognize that racism works by facilitating white cultural ignorance of black difference in such a way that black difference becomes objectionable.

That we still live in a world where making blackness less objectionable to white people is a part of anti-racist work should make clear how much we are not past or post-race. And we know that many corporations have instituted policies banning black hairstyles like braids. Hell, this summer taught us that even in black communities, these kinds of policies surface and do harm in an attempt to make black folks more respectable. Combing through these tangled webs of whiteness interwoven as it is with our own pain and internalized pathology is difficult shit. And ain’t nobody invented a detangling conditioner powerful enough for this.

A wide-tooth comb allows us to attend to the subversiveness here.

And there is a subversiveness to these photos because they invert the gaze, making white women the object of ridicule or more politely put, the objects of cultural wonder. Now certainly one could argue that it is still black hair being ridiculed, that is the black hair which is out of place here, not the white women.  These photos certainly don’t invite black girl presence, and as such they do reinscribe existing power structures.

I buy that argument. Turns out fine-tooth combs do have their place. Subversiveness is not inherently progressive. Political acts have limits. But this doesn’t read to me as a complete failure.

Another photographer in Philadelphia attempted a similar kind of project by asking to photograph men who harassed her on the streets. She captured their shame, defiance, reluctance, vulnerability – humanity – even as she called them out for their behavior.

The question for us is whether these attempts to subvert and reframe the white corporate gaze and the black male street gaze (not that these are equivalent, mind you) on our terms are powerful at any level? Even if these kinds of strategies don’t undo structural racism, do they potentially improve the quality of life in our immediate environs – the places where we work, the places where we live and shop? Do these incremental goals matter in the fight against racism?

We struggle with these questions daily. But sometimes it’s nice to able to laugh and keep it moving. Oh, and to street harassers and white folks who need to know: Look, but don’t touch.