Why the Oscar race still matters

It's "12 Years" vs. "Gravity," as the Oscar season kicks off early amid punditry, lamentation and philosophy 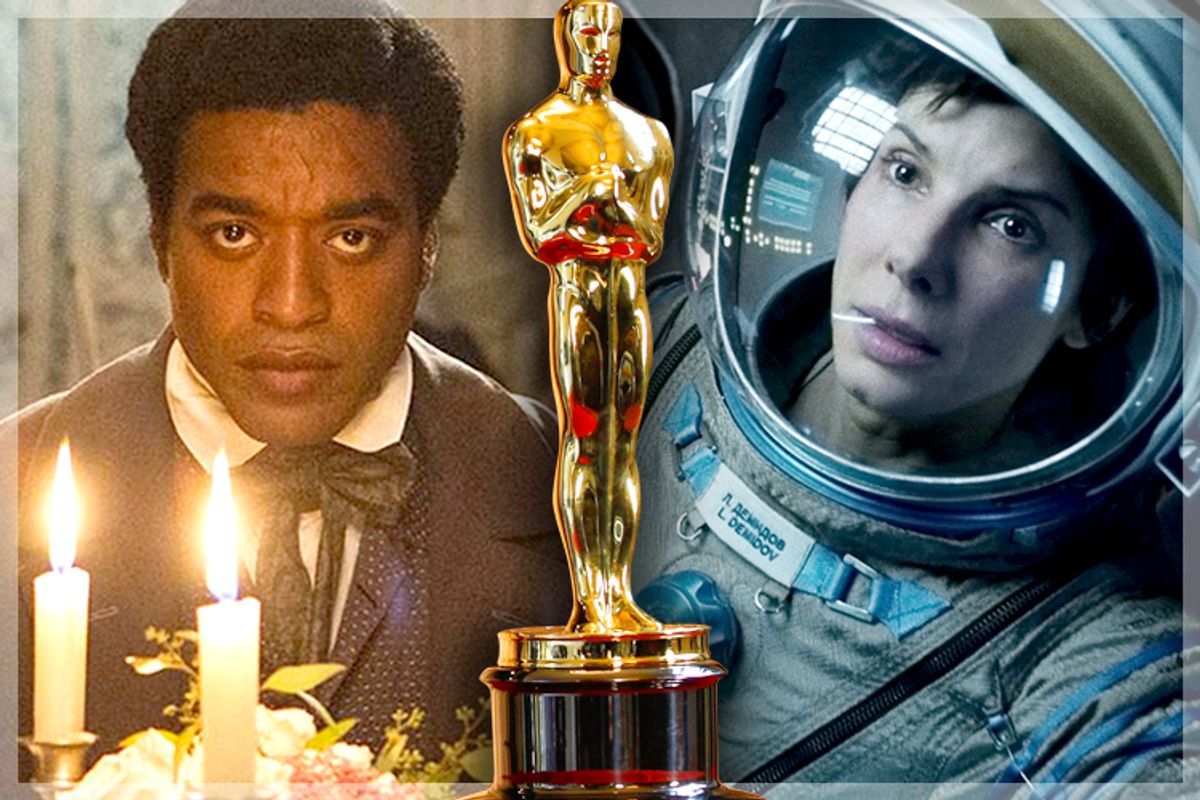 Chiwetel Ejiofor in "12 Years a Slave," Sandra Bullock in "Gravity"
--

This week brings us the unofficial opening of Oscar season, with the indie-oriented Gotham Awards announcing their list of early-bird nominees on Thursday morning. (I have a pretty good idea what’s on the list, but no hints and no cheating.) Then again, last week was also the opening of Oscar season, with the release of “12 Years a Slave,” and so was the release of “Gravity” three weeks ago. When is it ever not Oscar season? During the Oscar telecast itself, perhaps? I won’t go back and try to figure out how long it took after Seth MacFarlane left the stage last February for someone to start posting unfounded awards speculation about this year’s movies. I'm guessing it probably happened before that.

This condition of permanent Oscar-buzz is the ultimate fulfillment of a 24/7 news cycle that has become like the earth-girdling worm Ouroboros feeding on its own tail: Empty pseudo-expertise applied to an unknowable future pseudo-event whose meaning (if any) has been shrouded from us by gauzy layers of religion and ideology. And yet here we are, trapped in the loop like Bill Murray in “Groundhog Day,” a classic Ouroboros text if ever there was one: I’m writing this and you’re reading it, and the contempt we both pretend to feel is undercut by the unnerving certainty that there’s some hard nugget of reality in there somewhere, if we could only dig it up.

I’m certainly not above doing a little tea-leaf reading on the incipient Oscar race, even before we’ve drunk the tea. And we’ll get to that. (Team “12 Years” here, at least to this point.) But I think the bigger and more interesting question is about what we get out of this annual spectacle. Most people probably now understand that the academy’s best-picture award more or less means “best representative of the mainstream American film industry and its values,” and should be understood as a cultural snapshot whose value is momentary, or a communal happy place for a bunch of Beverly Hills septuagenarians. (I exaggerate, but not by much.) But what’s in it for the rest of us, and what can possibly explain our addictive fascination with the results of a glorified trade-show pageant?

I got into a fascinating conversation about all this recently on Facebook with Grantland columnist Mark Harris and New York magazine critic David Edelstein, writers I like and respect. Harris had written a piece – a fascinating and worthwhile piece, I think – about the early rush to declare “12 Years a Slave” the Oscar front-runner, or even presumptive winner, after the reception at its festival premiere in Toronto. He hadn’t seen the film yet, and said so; his piece was partly about the sped-up self-congratulation of the Hollywood-insider blogosphere, and partly about the cultural, political and racial meanings to be read into the premature anointment of a movie about slavery as the film industry’s standard-bearer in the fall of 2013.

By his own account, Edelstein has been bemoaning the inflated cultural significance of the Oscars – along with the thumbs-up/thumbs-down mode of film criticism, and the annual 10-best list -- for nearly 30 years. While making clear that he admired Harris’ writing, he bemoaned articles like this as an example of a “new decadence”: “What’s a guy with a mind like Mark Harris’ doing speculating about an award to be given in five months to a movie he probably hasn’t seen?” He called out a couple of prominent critics – well, those would be A.O. Scott of the New York Times and me – for acknowledging the Oscars in our reviews, not unlike “those hackish critics who write, ‘Polish up the Oscar for So-and-So!’” His role was to deliver those of us who had strayed from the true path of criticism a little tough love, to be “an irritant for a good cause.”

Harris responded – and the tone of all this was combative but jovial, just to be clear – by saying that he thought Oscar coverage was a valid way of opening up other cultural issues that could be glimpsed through the prism of the movie business. “How does Hollywood see itself? What does the industry's ever-evolving definition of a ‘prestige picture’ say about what the people who make movies see as their calling? What are the truths and what are the self-deceptions about movies and moviemaking that are exposed by the quest for awards?” I definitely find myself more on Harris’ side here, but I am also somewhat seduced by Edelstein’s crotchety complaining. The Oscar race has things to teach us, every single year; but on the other hand, the manufactured narrative that gets spun out of it is almost entirely devoid of meaning. I would say it’s like electoral politics reduced to pure symbolism, but that’s redundant. It’s like electoral politics with the ideology shoved under the carpet.

One of the distinguishing characteristics of the annual Oscar narrative, in fact, is how boring and free of drama it usually is. Some entertaining but unexceptional film – “The Artist,” really? “The King’s Speech”? “Slumdog Millionaire,” for the love of Christ? – briefly acquires a thin layer of impenetrable pixie dust, and after that the story rarely changes. The best thing I can say about last year’s big winner, “Argo,” is that it was a satisfyingly movie-like movie, which is almost always what academy voters are looking for. There are exceptions to the rule, but formal ambition, artistic innovation, extraordinary acting performances and fidelity to historical events are almost always negatives at Oscar time. The academy yearns for its own version of “that Barton Fink feeling,” if you catch my drift.

This year’s race is still in its embryo phase, but appears to pit two very different kinds of movies against each other, neither of them a classic Oscar-formula picture. If Steve McQueen’s “12 Years a Slave” is a valuable historical corrective, bringing a more realistic portrayal of American slavery to the screen than has ever been seen before, it’s also a formally audacious picture made by a British director most people in Hollywood have barely heard of, driven by long takes, a disturbing moral vision and a distinctive lack of cleansing catharsis at the end. Alfonso Cuarón’s outer-space adventure “Gravity,” on the other hand, may have too much catharsis, a hell-for-leather roller-coaster ride with only two actors and nearly no dialogue. It’s a celebration of technology depicting a world whose Achilles' heel is technology; a remake of Kubrick’s “2001” made by HAL, the evil computer.

What I’m supposed to say at this point is that there are other movies out there, still largely unseen and unreviewed, that may disrupt this two-horse race. Spike Jonze’s “Her,” in which Joaquin Phoenix falls in love with his operating system, sounds irresistible, and there’s also David O. Russell’s crime drama “American Hustle,” with Bradley Cooper and Christian Bale, and George Clooney’s “Monuments Men,” about a special World War II squad who rescue art from the Nazis … excuse me, I fell asleep. What was I on about? Oh yeah – maybe this will prove an arrogant analysis, but forget all that. Once the dominant Oscar narrative is established, whether that’s Ben Affleck’s so-called comeback or how much “we” all “love” that silent French movie that’s actually kind of dopey, it becomes very difficult to shake. Because this is an election with a smaller and less worldly voter base than the most recent mayoral race in Cedar Rapids, and arguably driven much more by prejudice and superstition.

If the narrative of the 2014 Oscars is now coming into focus, the issue of what we might learn from it remains up in the air. The Oscars are simultaneously a vapid, soul-sucking vacuum that takes up way too much bandwidth in our culture, and also a central cultural and political text that’s overloaded with all kinds of meanings. Bemoaning the dunder-headedness of the academy voters is addictive and irresistible – have you tried to watch “Crash” since the year it won? Has anyone? That is one dreadful motion picture. More years than not, we are all secretly (or not so secretly) bored by the question of who wins and who loses, which is only important to the individuals involved. We love the gowns and the celebrity gaffes, of course, and beyond that we struggle, year after year, with the unanswerable question of why something that obviously matters so little can also matter so much.