The city of SeaTac will vote in two weeks on establishing a $15 minimum, echoing the demand of fast food strikers 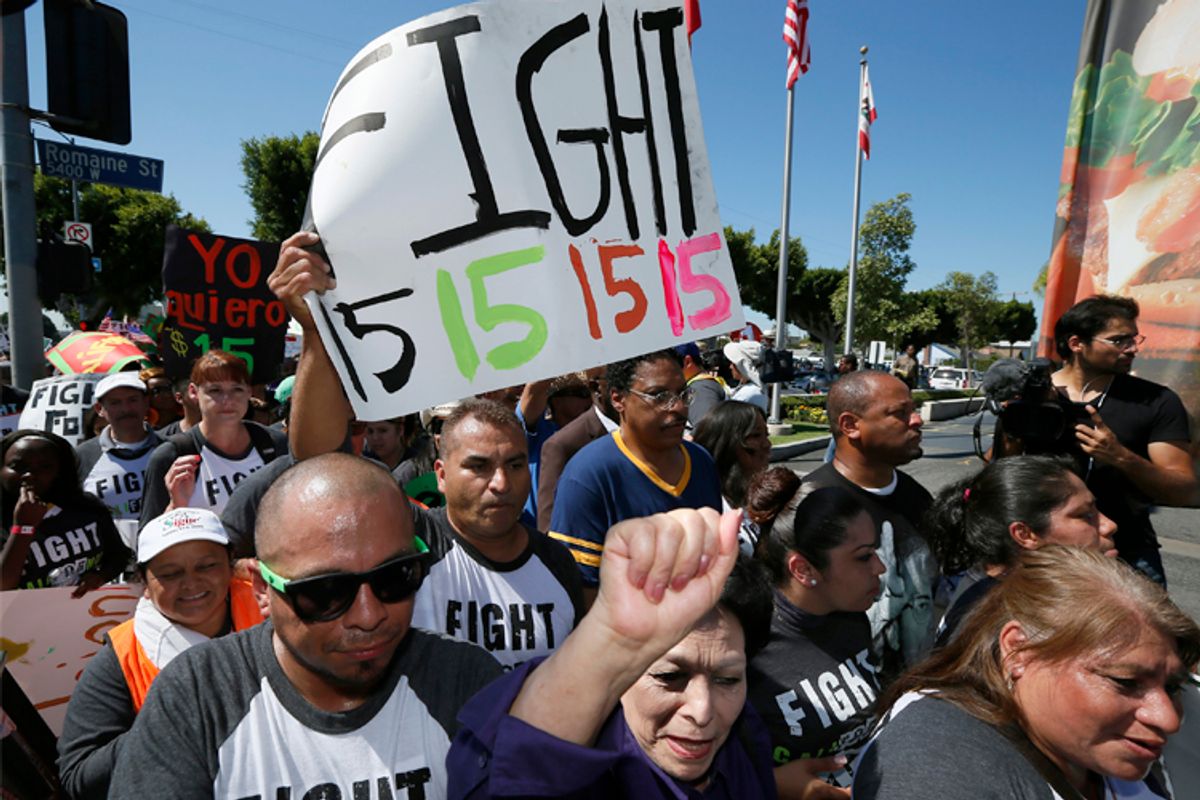 In two weeks, voters in SeaTac, Wash., will vote on establishing the country’s highest minimum wage – by a long shot. At $15 an hour, the proposed wage hike for the airport-anchored town would outpace the federal standard by nearly $8, and echo the demand that’s anchored the past year’s wave of fast food strikes. It’s drawn furious opposition from big business, and from think tanks funded by a shadowy Koch-backed group.

“It’s a case where corporate America made a conscious decision to cut wages in half over a period of time, where workers couldn’t use traditional organizing to essentially solve that problem, and now turn to the ballot to essentially impose what in some other era was impose by the strike,” said Service Employee International Union Healthcare 775NW president David Rolf, whose union has contributed hundreds of thousands of dollars to the effort. Rolf cited vicissitudes of labor law that would make unionization particularly daunting for airport service workers (some are covered by a federal law that could require a majority of a company’s employees in the entire country in order to win collective bargaining), as well as what he called a multi-decade scheme by airlines to subcontract work to “companies that specialize in low-wage un-benefited, part-time employment as a way of offering reduced labor costs.”

Voters in SeaTac – a city surrounding and including the Seattle-Tacoma airport – will decide the proposal’s fate on Nov. 5. If approved, the new law would require a wage of at least $15 for over 6,000 workers employed at the airport and surrounding hotels. Smaller airport employers and most SeaTac companies outside the airport and hotels would be exempted. But both sides say a wage hike in SeaTac would have ramifications far beyond the city of 25,000 – from nearby Seattle, to Washington, D.C.

“It’s certainly got at least the Puget Sound area here talking about $15 an hour minimum wages,” said Maxford Nelsen, a policy analyst for the conservative Freedom Foundation. He noted that the leading candidates for mayor in nearby Seattle had both expressed support for reaching a $15 minimum. At an August meeting of the Seattle Chamber of Commerce’s policy council, a partner at a lobbying firm contracted to oppose the referendum warned that he was already getting phone calls from Seattle council members saying that “the living wage is coming” to the larger city, and he conceded that “you couldn’t possibly have an apartment and support a family and so on on $9 an hour and I don’t think anybody can argue with that.” (The comments became public when a recording of the meeting was published by the Stranger.)

Nelsen warned that if the referendum passed, “to a certain extent, you’ll see prices rise, employment – whether in terms of hours or jobs – decrease, and I think you’ll see people less likely to expand economic development within the city of SeaTac in the future.”

But SEIU argued that the main airport-related businesses subject to a proposed raise would be both able to pay more and unable to offshore the work in response. “You’ve got giant or large multinational corporations making money by impoverishing workers and transferring costs onto working people and the local governments,” said Rolf. And “it’s simply not possible for my French fries to be cooked somewhere 5,000 miles away and show up hot in time for me to get back to my office after a 30-minute lunch break.” University of Massachusetts economist Arindrajit Dube told the New York Times that research doesn’t suggest a significant impact on staffing levels from wage hikes, but does show they reduce workplace turnover.

Federal filings show donations from Donors Trust -- a group supported by Charles and David Koch that Mother Jones’ Andrew Kroll called the “dark-money ATM of the conservative movement” -- to both the Freedom Foundation and the Washington Policy Center, another local group that has produced research opposing the referendum. The National Restaurant Association has donated at least $50,000 to the opposition; the NRA referred an inquiry to the Washington Restaurant Association, which warned in an email that “SeaTac workers – especially young people – will have a harder time finding local employment as more experienced, qualified outsiders converge on our city to compete for these jobs.”

The Freedom Foundation’s signature effort against the referendum has been a report by Nelsen contending that arguments by the referendum’s union backers (including an affiliate of my former employer, UNITE HERE) are undermined by those seven local unions’ own employment practices. Drawing on federal filings, Nelsen wrote that “26% of local union employees earn less than a full time $15 an hour minimum wage.” Nelsen argued that such statistics, along with a provision (common to living wage laws) that would allow union members to grant exemptions to their employers as part of a union contract, showed that what was really motivating unions was just a desire to bring in more union dues.

SEIU 775NW declined to comment specifically on the report. In an email, a spokesperson for the pro-referendum coalition said the reporter “had fudged numbers,” including by “dividing short term or part time positions’ pay by full time hours.” Nelsen argued that it was legitimate for him to include those union staffers who have part-time jobs that pay over $15 per hour in his count of those who “earn less than a full time $15 an hour,” because unions criticize employers’ reliance on part-time workers. Similarly, asked by Salon whether his use of annual stats would accurately reflect the compensation of union staffers employed for less than a full year, Nelsen said, “to a certain extent yes and no,” but compared such employment to seasonal hiring by businesses, for which “they’ll still take flak.” The lowest hourly wage rate for a current SEIU 775NW employee is $15.28.

With even a modest minimum wage increase seemingly stalled in Washington, D.C., why is this happening now in SeaTac, Wash.? Rolf told Salon that “fast food workers going on strike was critical to achieving a level of political awareness and support,” and that last November’s initial New York City fast food strike had helped to “set the tone” in pursuing $15 an hour. “There are a number of things that are happening synergistically in Seattle,” said Rolf, also citing the successful push for a paid sick leave ordinance and organizing efforts by immigrant workers, each of which involved support from community and clergy allies. “At the leadership level,” he said, “many of the same people are involved.”

As I’ve reported, SEIU is the key player behind the fast food strike wave, which spread to include 60 cities in an August walkout – all demanding $15 an hour and the chance to form a union without intimidation. A participant in a private August gathering SEIU held with allies told Salon that paths to victory under discussion included reaching a joint agreement with national burger corporations to cover the costs of higher standards, and pressing municipalities to pass laws that would require fast food franchisees to pay $15 per hour. Asked about that meeting, SEIU strategist Scott Courtney described the conversation there as preliminary and hypothetical, but emphasized that contrary to some perceptions, the campaign was not simply aiming to win a federal minimum wage increase in Congress. “If we were,” Courtney told Salon, “somebody ought to shoot us.”

Rolf said that SeaTac was positioned to show more leadership than Congress: “Incrementalism is not the inspirational stuff of which powerful social movements are made … There’s no reason for activists to comport their own expectations to be as low as our hopes for members of Congress.” He said the referendum turns on “whether or not all work should pay a sufficient living wage to make a dignified life possible for people who work full-time,” which “excites a tremendous amount of enthusiasm and energy” from supporters, “just as it incites a fair amount of irrational fear among the Chamber of Commerce crowd.”