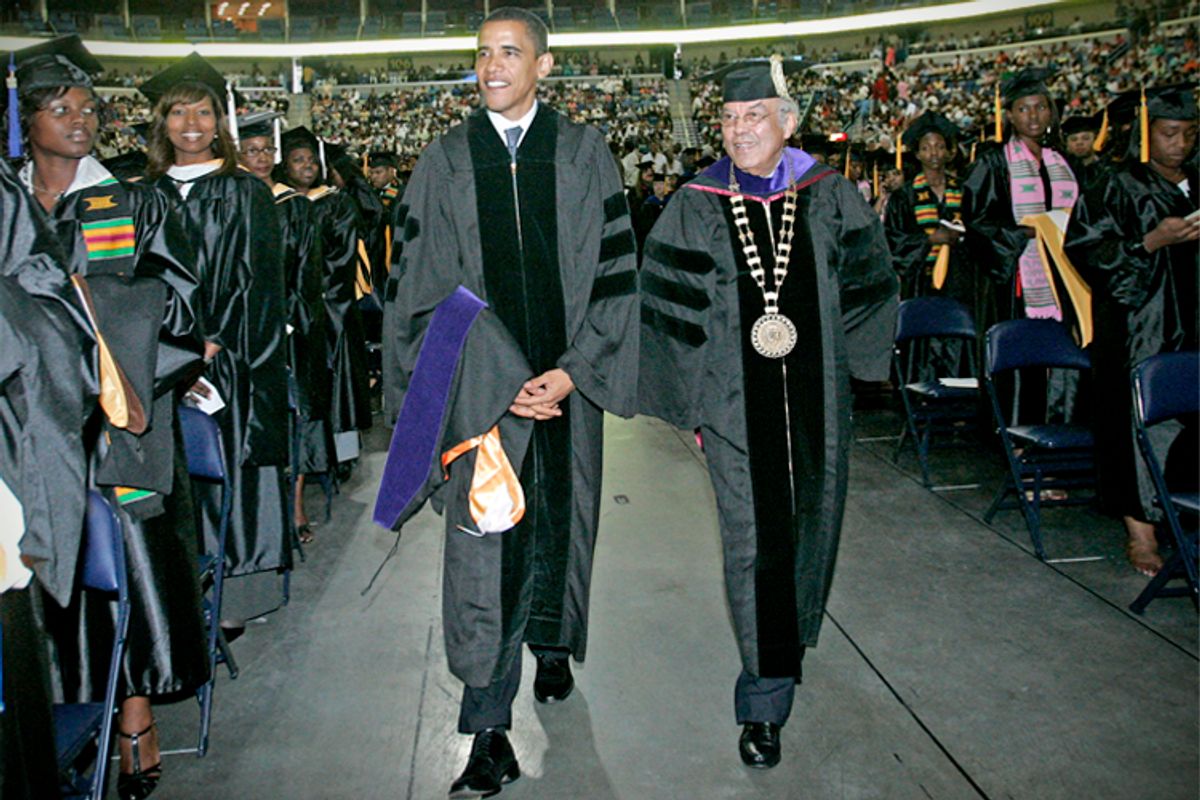 Barack Obama and Norman C. Francis, president of Xavier University of Louisiana are seen during the processional at the annual commencement program for Xavier University. (AP/Judi Bottoni)
--

On Friday, football players from Grambling State University, a small historically black university (HBCU) in north central Louisiana, refused to board a bus for a two-and-a-half hour ride to play their competitors Jackson State University in Jackson, Miss. Incensed with the university over crumbling and unsafe facilities and the recent and unceremonious firing of coach Doug Williams, the famed former Washington R___skins [letters deleted by author because it is an offensive slur] quarterback and Grambling alum, the players refused to play.

Later, news surfaced that two student journalists from the campus paper the Gramblinite had been punished for standing in solidarity with football players and also for exposing campus facilities badly in need of repair.

I grew up down the road from Grambling, and learned my appreciation for black college football and band culture, over the course of many homecomings spent on the campus. As a high school student taking classes during a summer pre-college program, I passed the legendary Coach Eddie Robinson on campus. When it was time to go to college, Grambling was the first school to offer me a full scholarship.

I chose to go elsewhere, but tellingly, I chose an HBCU – Howard University. Of late, Grambling and Howard have been the subject of much bad press. The unexpected resignation of Howard president Sidney Ribeau seemed to support concerns about Howard’s steady decline. Certainly, the fact that Howard, once named in the top 100 universities in the country in U.S. News and World Report, has fallen to No. 142 is cause for concern.

Coupled with reports that Louisiana state appropriations to Grambling have fallen from $31.6 million to $13.8 million since 2007, it seems that the latest victims of public austerity measures are black colleges. $31.6 million is a paltry amount of state aid, and $13.8 million constitutes a starvation budget. These massive cuts endanger the welfare of one of Louisiana’s oldest institutions of higher learning, and show the deep racial resentment that has driven GOP policies in Louisiana, particularly under Gov. Bobby Jindal.

These schisms at Grambling and Howard and the attempts to repress or remediate them through positive P.R. campaigns are a part of a black cultural politics of respectability. I absolutely abhor the attempts of the Grambling administration to silence students for bringing media attention to unacceptable conditions on campus. But I also understand that the administration’s conservatism grows out of a fear that the problem will be blamed on administrative incompetence and racial pathology rather than on the defunding of public higher and secondary education that has become the defining marker of the 21st century.

Ribeau faced similar challenges at Howard as he tried to downsize programs and create an infusion of cash by promoting STEM (science, technology, engineering, math) programs on campus. Schools across the country are following similar  formulas for sustainability. Yet technical training in the sciences and business without a solid humanities education creates an endless stream of uncritical laborers unprepared to stand up to a system hellbent on seeing human beings as “human capital.” African-Americans know the danger of thinking of people primarily as capital. Even though I know the pressures of sustainability that black colleges continue to face, I balked at Ribeau as he cut programs that have been historically significant to the intellectual mission of Howard based on the neoliberal logic of this moment: Anything that doesn’t pad the bottom line is a drain and must go.

But the thinly veiled government contempt for historically black institutions at both the federal and state level grows out of an intellectually disingenuous and fantastical belief that we live in a post-racial world in which we no longer need colleges based on race. There is a refusal to acknowledge that predominantly white institutions are shot through at every level with the logic of whiteness and that many of these colleges remain inhospitable places for black students to learn.

Despite this assault, HBCUs continue to produce stellar graduates with far fewer resources than comparable institutions. In fact a federal judge in Maryland ruled earlier this month that the state of Maryland actively perpetuates an inferior segregated education system, by permitting duplicate programs at predominantly white institutions that have more funding. This discourages enrollments in those programs at the state’s black institutions like Morgan State, Bowie State and Coppin State.

We need black colleges for one simple reason: Race still matters. Race and racism fundamentally shape the educational experiences of all students in this country.

For me, there was the teacher who sought to humiliate and make me cry every day, because I did well in her classes. She owned a small store in town, and black folks routinely avoided shopping there, due to the cold, unwelcoming stare that she gave to black folks who stopped in to shop. In that same school, a white male classmate called me a nigger, after I cut in front of him at the water fountain. The quickness with which that word rolled off his tongue convinced me that he used it frequently at home: His mother also taught at the school.

Though I was admitted to a range of “Southern Ivies” – Tulane, Emory and Rice – I chose to attend an HBCU because I spent my formative educational experiences in this kind of racially unforgiving environment.

What I longed for was to be among black achievers, to be affirmed as a smart black person by other black people, to rid myself of the lie of my exceptionalism. That happened for me on my very first day at Howard, when I was surrounded by exceptionally intelligent black students, some who had scored perfect scores on the SAT, others who had turned down admissions to Harvard and other Ivies for the opportunity to attend. And far from giving me a cloistered and insular worldview of race, I met and sparred mightily in classes with black Republicans, befriended black students from countries all over the world, and had professors of multiple ethnic backgrounds.

HBCUs are a national treasure in the great American story, precisely because they don’t achieve greatness based on lies about the realities of race. They take students who have been injured in some way by our inequitable racial system – for instance, through attendance at crumbling public schools –address their disparities with care and then prepare those students to go out and be productive citizens. I have seen it happen in my own family. HBCUs are America’s most enduring racial justice project.

The football players and journalists at Grambling State showed great courage in taking on the conservative administration at their school. But the administration is only one part of the problem. The real issue is a slow but steady assault on the integrity of the black college as an idea. There is also a devaluing of the constituency these institutions serve, and a failure to recognize the historical reasons for the vulnerability of these institutions and why this justifies robust governmental aid.

But to focus on individualist solutions like alumni giving when black people have lost over half their collective net wealth since 2008, to lambaste the administration for cracking down on students out of fear of being pathologized, and to not find tangible ways to support these students, is to miss the broader structural issues that have students learning and playing sports in crumbling buildings.

If we don’t stop the push toward austerity, black colleges and the students who attend them will become the latest casualty in the right’s full-scale assault on public institutions.