How corporations hijack government, with GOP help, in the name of creating jobs 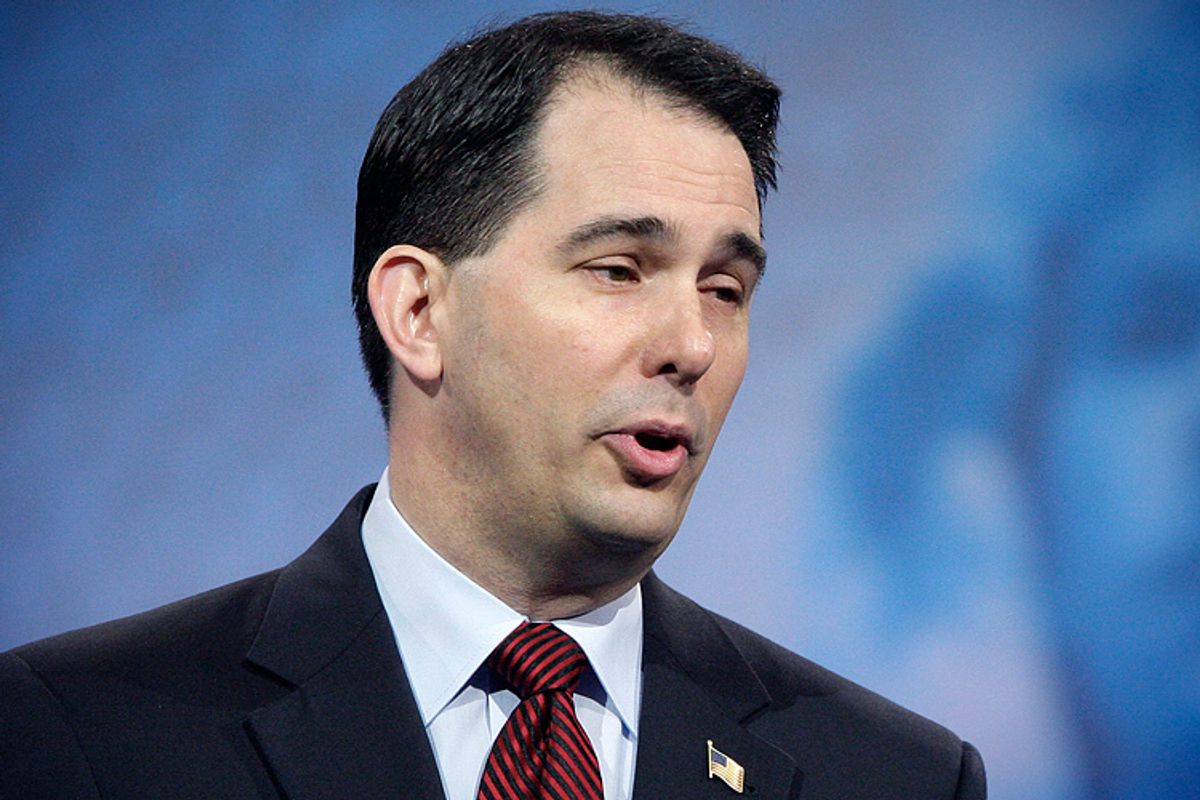 After being swept into statehouses in the red wave of 2010, Republican Govs. Scott Walker, John Kasich and Terry Branstad each presided over the replacement of a state agency responsible for economic development with a less public, more private alternative. Arizona’s Jan Brewer did the same in 2010 after replacing Janet Napolitano, who'd been tapped for Obama's Cabinet.  Walker’s Wisconsin, Kasich’s Ohio, Branstad’s Iowa and Brewer’s Arizona were only the latest to institute a “public-private partnership” approach to development: States including Indiana, Florida, Rhode Island, Michigan and Texas had done the same years earlier. Now North Carolina’s Pat McCrory, who entered the governor’s mansion in January, aims to do the same. A new report from a progressive group warns that means good news for the wealthy and politically connected, but bad news for just about everyone else.

“Privatization augurs against transparency …” Good Jobs First executive director Greg LeRoy told Salon. LeRoy is a co-author of the new report "Creating Scandals Instead of Jobs: The Failures of Privatized State Economic Development," which his group released Wednesday afternoon. Based on recent years’ scandals and controversies in several states, the authors conclude that “the privatization of economic development agency functions is an inherently corrupting action that states should avoid or repeal.” They argue the record shows that “privatization was not a panacea,” but instead fostered misuse of taxes; excessive bonuses; questionable subsidies; conflicts of interest; specious impact claims; and “resistance to accountability.” Goods Jobs First funders include unions and foundations.

A spokesperson for Gov. Kasich emailed Salon a one-sentence take on the report: “We don’t pay much attention to politically motivated opponents whose mission is to combat job creation.”

Kasich promised as a candidate to substitute a new entity, led by “a successful, experienced business leader,” for the existing Ohio Department of Development. The result, JobsOhio, features prominently in the GJF report. The authors note that its board included some of Kasich’s “major campaign contributors and executives from companies that were recipients of large state development subsidies.” They write that JobsOhio “received a large transfer of state monies about which the legislature was not informed, intermingled public and private monies, refused to name its private donors, and then won legal exemption (advocated by Gov. Kasich) from review of its finances by the state auditor."

The authors also fault the Arizona Commerce Authority, whose first head reaped a privately paid $60,000 bonus and resigned after one year; and the Wisconsin Economic Development Corp., which they charge has been “racked by scandals and high-level staff instability.” They cite accusations against WEDC including spending millions in federal funds “without legal authority”; failing to “track past-due loans”; and having “hired an executive who owed the state a large amount of back taxes.” LeRoy told reporters on a Wednesday conference call that, of the four newest public-private partnerships, Iowa’s was the only one to so far avoid significant scandal.

The report also slammed some of those four entities’ predecessors, including the Indiana Economic Development Corp. – GJF noted “a state audit found that more than 40 percent of the jobs promised by companies described by IEDC as ‘economic successes’ had never materialized” – and Enterprise Florida Inc.: while “more than $20 million in subsidies has gone to EFI board member companies,” in 2011 the Orlando Sentinel “reported that since 1995 only one-third of 224,000 promised jobs materialized."

Gov. Scott’s office referred an inquiry to Enterprise Florida Inc., whose strategic communications director emailed that the group’s “efforts have resulted in an increase of competitive jobs projects established, private-sector jobs created and capital investment.” He noted that EFI “has received a clean opinion on its financial statements as conducted by its independent auditors and presented to EFI’s Board of Directors.” The offices of Govs. Walker, Brewer and Pence did not immediately respond to Wednesday evening inquiries.

“If we don’t know how the money’s spent, if we don’t get accurate assessments of the outcomes that we accept from our economic development subsidies or support, then there’s no way for us to evaluate the job they’re doing,” Donald Cohen, who leads the foundation- and labor-backed privatization watchdog In the Public Interest, told reporters on Wednesday’s call. “It’s fundamental to being able to manage our resources.” Cohen added, "When we’re talking about giving away the power and authority to give away public dollars, to make public decisions, then it is all the more important that public control be established in the strongest possible way.”

By “mingling private money or having board seats for sale,” LeRoy told reporters, public-private partnerships are “giving undue influence to a tiny share of mostly large companies that can afford to pay and play, potentially to the detriment of the focus of the entity.”

“You want people who are covered by ethics and disclosure and sunshine laws and oversight,” said LeRoy. “We know that government agencies aren’t perfect, but they by far are more accountable.” He also argued that public sector collective bargaining – which came under high-profile attack by Walker and Kasich – was also a check against abuse, because it “helps shield whistle-blowers and protect taxpayers.”

While GJF has proposed various safeguards for public-private economic development groups, it emphasized that its first choice would be for states to simply return their functions to fully public departments. “The economy is soft right now – we need to focus on the basics,” said LeRoy, rather than “tweaking the rules of a captive entity that co-mingles public and private money to get into all of these sort of gray areas.”