The deceptive legacy of Lou Reed

Avatar of avant-garde cool and punk godfather, Lou Reed was a crafty chameleon whose sensibility shaped our age 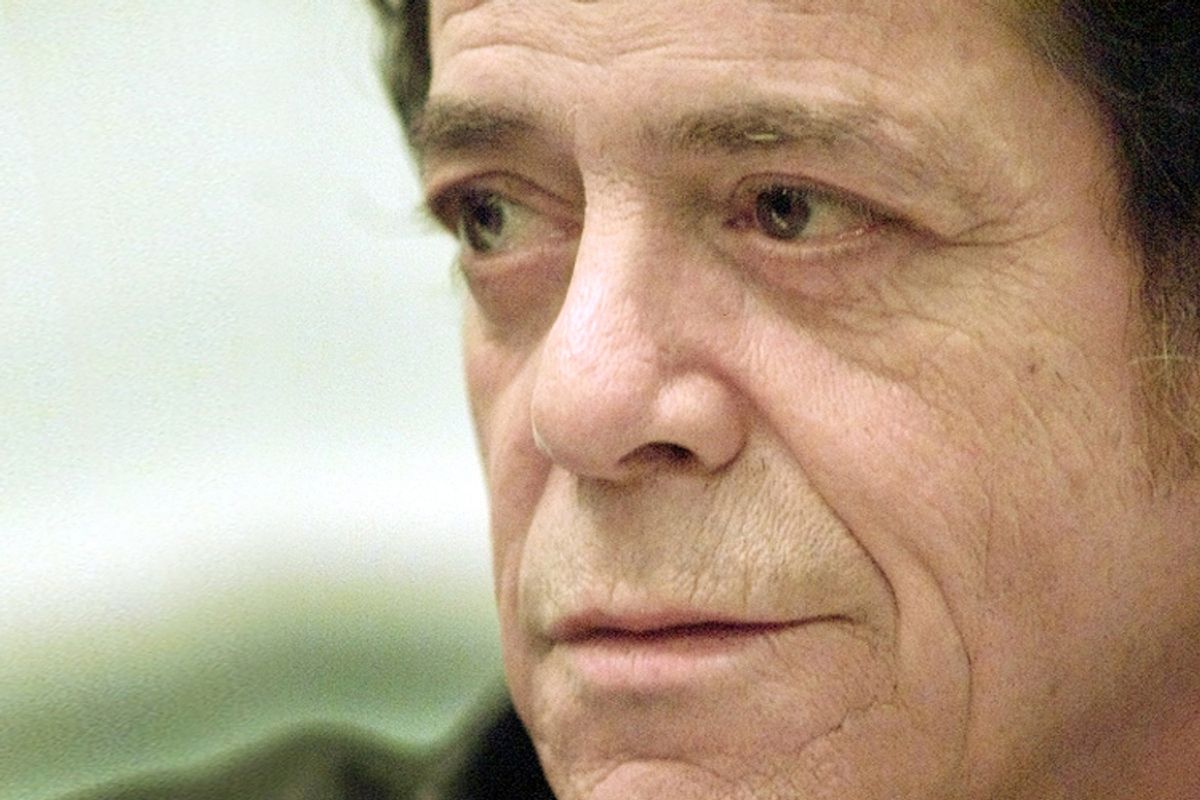 Yesterday I wrote to the filmmaker Mary Harron, the director of “I Shot Andy Warhol” and “American Psycho,” to ask her about the death of Lou Reed. Before she started making movies, Mary was a pioneering rock journalist in the mid-‘70s New York punk scene, one of the first people to understand that something remarkable was happening in a slimy little bar called CBGB on the Lower East Side.

She wrote to me this morning:

I'm devastated. I always thought he would live forever. Without Lou Reed and the Velvets, would there have been a CBGB's, a New York punk, any kind of New York underground rock or art scene? Maybe but it would have had a completely different DNA.

He also gave the best answer ever, when asked what he thought about critics: "I think they're all fabulous." Now that's a voice we won’t hear again.

As Mary knows better than I do, what Reed meant by “fabulous” is difficult to categorize. (I can almost hear him saying that, drawing it out and relishing it, in his old-school outer-borough accent.) There’s something in that comment – something beyond sarcasm, something treacherous and unreadable – that is quintessentially Lou Reed. Everything about him was deceptive and impossible to pin down, including the fact that this central figure of the 1960s avant-garde and godfather of the punk movement, this force of disorder, negation and subversion, was in many ways the product of an earlier era.

Reed was a World War II baby, a Brooklyn native who grew up listening to doo-wop and 1950s rock ‘n’ roll. (Those influences came and went in his music, but were never entirely absent.) Although he liked to present himself as an anti-intellectual, street-smart New Yorker (“I guess I’m just dumb/ ‘Cause I know I’m not smart/ But deep down inside/ I got a rock and roll heart”), he had studied with the poet and fiction writer Delmore Schwartz, himself an all-but-forgotten American genius, at Syracuse University. In fact, that was apparently when Reed wrote the lyric that would later become the Velvet Underground song “Heroin.” I have no idea whether Schwartz ever read it or would have understood what it was about, but he would have admired its terseness, its power, its chilling indeterminacy:

Before he became an underground rock legend, and embarked on a long relationship with a transgender person called Rachel – whose surname and real identity remain mysterious to this day – Reed had written and sung a 1964 novelty hit called “The Ostrich,” in celebration of an imaginary dance craze. Only a year or so later, Reed and the Velvet Underground had become the main attraction in the Exploding Plastic Inevitable, Andy Warhol’s floating party/happening/multimedia spectacle. Not merely did the Velvets combine the simplicity of garage rock with the minimalism of 20th-century classical music in an entirely novel way, they openly celebrated unbounded sexuality, 20 years or more before anybody used the word "queer" in a non-derogatory way. From then on, Reed had all those things at work in his music and his public persona: sock-hop entertainer, black-clad artist, handsome pervert.

Ben Ratliff’s fine obituary in the New York Times told me something I hadn’t known about Reed, which suggests that he thought his musical career might be over after the Velvets broke up in 1970. Although the band had achieved significant countercultural notoriety – and recorded at least one future classic-rock-radio staple, “Sweet Jane” – they hadn’t made a nickel, and were viewed by the mainstream music industry as a bizarre and radioactive disaster. No one, including Reed and his feuding bandmates, had any idea how influential they would become. So Reed left New York City for the Long Island suburbs where he’d been raised, and went to work for his dad’s accounting firm for two years. He recorded one tepid solo album that didn’t sell, and that might well have been it: Lewis Allan Reed, CPA.

But as numerous rock histories have documented, a chance meeting at Max’s Kansas City late in 1971 led to a strategic alliance with David Bowie and Iggy Pop, two other underground rock heroes whose moment (difficult as this is to believe in retrospect) seemed to have passed. Bowie brought Reed to London to record the 1972 album “Transformer,” which remains – across his often brilliant, sometimes leaden and never predictable later career, from the unlistenable experiment “Metal Machine Music” to “Songs for Drella” to the brief Velvets reunion circa 1994 to his critically savaged Metallica collaboration – the distillation of his peculiar blend of vulnerability and hardness.

I will concede the obvious fact that none of Reed’s solo work carries the historical and cultural impact of the first two Velvet Underground albums. But as a kid in the 1970s, arriving by way of AM radio and then the Beatles and Stones, I could find no way into those records. They seemed to me, at the time, to have been recorded on another planet, by beings of another species, whereas “Transformer” was identifiably a pop album, seductively built around hooks and choruses. (Of course it contained “Walk on the Wild Side,” Reed’s only top-40 single.) I felt invited to the party, and only after I was inside and the door was closed did I grasp that the party would go on all night, and involved all the things I thought I knew about girls and boys and drugs and sex being called into question or simply thrown out the window. And so of course I was corrupted.

At any rate, by the time Mary Harron first met Lou Reed in CBGB, sometime in 1975, he had already been a poet and a songwriter and a star and a nobody and then a star again. He was famously mean to her and her friends Legs McNeil and John Holmstrom, who were launching a self-published magazine they called Punk. Recalling the event in his 1996 oral history “Please Kill Me” (written with Gillian McCain), McNeil remembered Reed as “old, and snotty, and like somebody’s cranky old drunken father.” (For the record, Reed would have been 33 at the time.)

I don’t mean to abrogate the convention about speaking ill of the dead, but it does Reed’s legacy no favors to overlook the fact that he was often a prickly and difficult personality. When considering Harron's comment about the DNA Reed imparted to the New York underground scene, it’s useful to remember that he often said he had been greatly influenced by Bob Dylan. Reed absorbed Dylan’s “Dont Look Back”-era lessons in celebrity cool, fused them with Andy Warhol’s turtleneck blankness and raised them to an exponential power, blazing new frontiers in totally not giving a shit.

Anyway, the point of the anecdote is that Reed’s apparent cruelty was (at least sometimes) an aspect of his genius, and that perhaps without meaning to he gave these aspiring journalists exactly what they needed. In “Please Kill Me” Mary Harron remembers the group interview with Reed (and his companion Rachel) as rude, sour and hostile: “I thought he was quite devastating really.” Later that night, she finished writing an article about the Ramones – who had just played their first gig at CBGB – and walked it clear across Manhattan, from the East Village to the Punk “office,” a storefront under the railroad tracks on 10th Avenue. When she finally got there, Holmstrom showed her the confrontational interview with Reed, rendered as a comic strip.

“Everything that was humiliating, embarrassing and stupid had been turned to an advantage,” Harron remembered. “And that’s when I knew that Punk was going to work.” That cartoon interview became the cover story for the first issue of Holmstrom and McNeil’s magazine, which captured the attention of a few hundred people on the downtown scene and launched a word, a movement, a style and an attitude that would shift popular culture in unimaginable directions. Just one of the deceptive, incalculable gifts left us by Lou Reed.