Posting your cleavage on Instagram does nothing to fight breast cancer 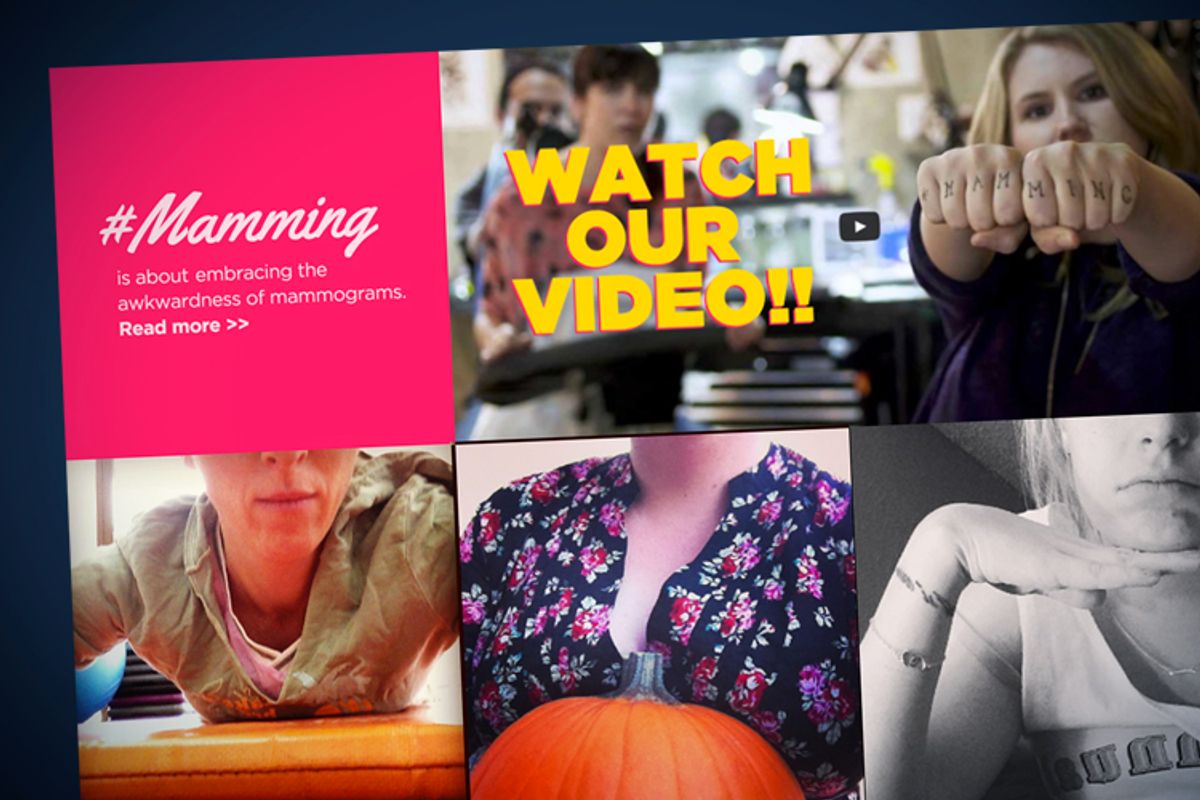 Have you ever thought, "If only there were some way to combine everything annoying about artificially created memes with everything terrible about feel-good, sexed-up breast cancer awareness campaigns?" If you have, it's your lucky day. Permit me to introduce you to mamming. Oh, sorry, I meant HASHTAG MAMMING.

Because God forbid we ever get out of an October without sinking to some new depth of offensive "awareness," mamming involves parking your clothed boobs (or moobs, if you're so endowed) on a flat surface and photographing it and sharing it on social media. Hashtag mamming!

The practice -- to which journalists have already ascribed the hula hoop-era words "craze" and "sweeping" -- is the creation of New York ad execs Michele Jaret and Michelle Lamont. There is a Web page that encourages us to "show solidarity with the millions of women getting mammograms this Breast Cancer Awareness Month" and "embrace the awkwardness of mammograms and inspire more women to mam where it counts: at the doctor’s office." And of course there's a humorous video, offering a lighthearted guide to mamming and telling women, "This October, lay your boobs on stuff and Instagram a pic." And based on the Instagrams, the initiative has definitely given a lot of people an excuse to post pictures of themselves smiling and flaunting their cleavage. Yes, finally, somebody's thought of posting cleavage pictures on Instagram. Kind of makes you nostalgic for those simpler days of Facebook statuses about bras, doesn't it?

The responses to mamming have been mixed. The New York Post called it "the new planking," which is no doubt the intention – but also tells you why it's so irritating.  And the Stir called it "cute, quirky, and funny" and explained, "any campaign that helps get the word out there about mammograms is a positive thing." But on Sunday, Boing Boing's Xeni Jardin, who has for the past two years been documenting her experience with breast cancer, declared, "I have breast cancer. Your self-serving shtick is tasteless, disrespectful, and ill-informed."

The 25-year-old Lamont is a breast cancer survivor herself. On her blog, she writes candidly about finding the lump, having her doctor initially dismiss it, her eventual diagnosis of a 1.4cm tumor, and her mastectomy and chemo. Lamont's experience is a serious and intense one, and her desire to use it to help others is understandable. But her message, "I'm fully and completely supportive of any and all initiatives that work to make sure women have access to early detection" because "there is simply nothing more important" doesn't add up. As breast cancer survivor Peggy Orenstein masterfully pointed out earlier this year, the connection between mammograms and saving women's lives is dubious at best, and is "is far more likely to result in overdiagnosis and unnecessary treatment, including surgery, weeks of radiation and potentially toxic drugs ... Mammograms, it turns out, are not so great at detecting the most lethal forms of disease." In the meantime, genetic testing is alerting women to the possibility of cancer-causing genes and mammograms are picking up diagnoses of "Stage Zero" ductal carcinoma in situ – which may be driving droves of frightened women to drastic and possibly unnecessary measures.

Based on the glut of October pink, it's doubtful whether encouraging even more boob pics on the Internet is exactly a necessary public service. As a friend in the pharmaceutical industry asks, "Is there anyone at this point who isn't aware of breast cancer?" But the mamming campaign, meanwhile, chugs along cheerleading for all of it, including suggesting that you can "help" by checking out "worthy organizations" like the very questionable, highly agenda-driven Komen for the Cure.

I hate breast cancer too. I hate that it took my friends Phoebe and Gigi and I hate that it is right this moment trying to take even more of my friends. And while I respect the right of any person facing cancer to do so with humor and irreverence, I'm tired of the way the overemphasis on breast cancer has created a toxic culture of misunderstanding about what the real risks to our health are, and about accurately assessing disease prevention, detection and treatment. FYI, lung cancer kills more women than breast cancer, and heart disease kills more women than cancer, period. I am sick of the willfully ignorant assumption that, hey, doing something – even something as pointless as showing off your boobs on Instagram -- is better than nothing, and that mammograms are some magical answer to a deadly disease – especially when that's an idea that benefits the mammogram machine makers so conveniently. Let me mamsplain it to you simply: Most of all, I am sick and tired and disgusted at women's health issues, again and again, being framed in trivializing, cutesy and ultimately not very useful ways. You can wake me up when October ends.