The first rule of blackface: It's not hard to understand, everyone

...is don't wear blackface. The end. Now why is that so hard for some people to remember? 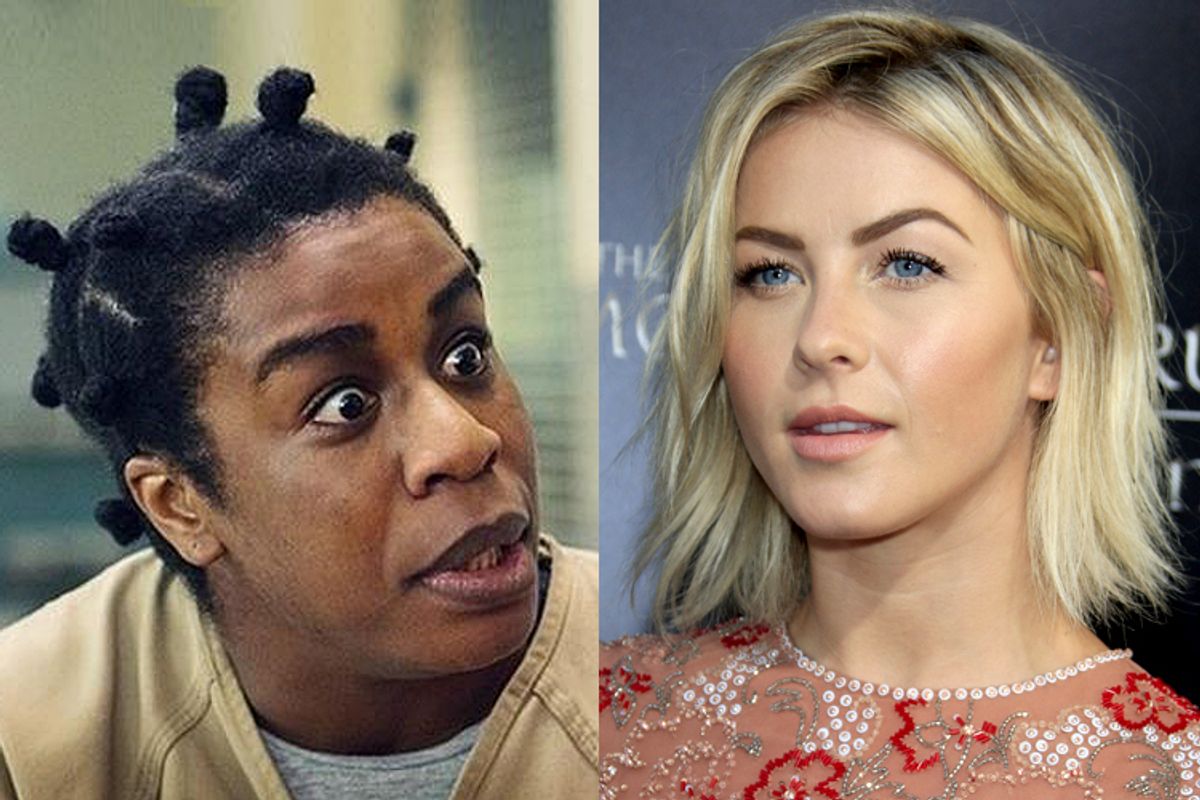 Two troubled souls in Florida – Greg Cimeno and William Filene — decided that it would be “fucking hilarious” to dress up as George Zimmerman and a murdered Trayvon Martin for Halloween. Filene donned a hoodie with blood painted in the center and put on black face paint. His friend Greg put on a T-shirt that said “neighborhood watch.” In the picture that Caitlin Cimeno put up on Facebook, the two men smile and laugh for the camera with Caitlin standing in the middle having a blast.

An innocent teenage boy was murdered and these poor excuses for human beings find it reasonable to use his body as the ground upon which to stage their Halloween fun.

(The actress Julianne Hough also sparked outrage this weekend when she attended a Halloween party in blackface as the character Crazy Eyes from the show "Orange Is The New Black.")

I don’t know how much more direct I can be in saying this: Do not wear blackface for Halloween. (Or brownface or yellowface or redface) It’s that simple. To do so is utterly and incontestably racist and needlessly insensitive.

And yes, I used a command. Don’t do it. This is not a question about rights. Human beings have every right to do completely effed up things. But who in their right mind wants to argue for the right to be racist, the right to make a mockery of human life, the right to be an asshole?

Blackface minstrelsy emerged as a form of mass popular entertainment in this country in the 1830s. Scholars like Benjamin Reiss and others who write about it suggest that white performers donning blackface to perform for white audiences allowed white people to work out their cultural anxieties and prejudices about race, racism, whiteness and blackness.

When white folks paint their bodies black, they demonstrate that they see the black body as a permissive site for the expression of trauma, pain and illicit pleasures. In other words, being in a black body permits them to do everything they are uncomfortable doing in a white body: being lewd and crude, celebrating violence, acting sexually promiscuous, using racial slurs.

This is just one more lie of white racism: that black people are free to do all the things our society hates and demonizes while white people are bound by the strictures of respectability. White pathologization of the black body is classic psychological projection. Everything that there is to abhor about whiteness and white supremacy gets projected onto the black body and becomes a material problem for black people.

Now for many people who simply do not want to concede the horror and racism of these acts by Filene and the Cimenos, it would be easy to dismiss this as individual racism, to suggest that these people are clearly jerks, but that their sentiments are not generalizable.

Every year, pictures surface on social media of college kids and regular citizens donning blackface for parties. This is not an isolated incident. It keeps happening and it happens because white people do not actually believe this constitutes an injury to black people. Or maybe they just don’t care.

“We’re just having fun,” many of them say. Look, I get the cultural fascination with black skin. The American national imaginary is built on the mythic lore of black otherness – superhuman strength to supply the main labor force of the national economy, men and women with extraordinary sexual desire and prowess, unparalleled athleticism, and a deep anger that leads to a fearsome capacity for violence.

Notice that I said myth. I understand that white folks without access to good anti-racist education might attempt to understand this group of people who are continually subject to the machinations of white supremacy by trying their damnedest to understand what it feels like to be black.

My suggestion to those people: Just stop. The whole point of white supremacy beyond having a global monopoly on power and domination is that white people are never supposed to feel their race.

In fact, that is my question: How does it feel to be white?

I imagine that that feels good. Safe. I’m not asking for a perverse descent into white guilt here. I am asking white people to recognize that that goodness and innate comfort that you feel in your own skin, that uncompromised sense of your own humanity is exactly how you are supposed to feel.

I am asking you to recognize that black people and brown and native people are supposed to feel any way other than that.

There may be no redemption for these foolish racists who clearly have no moral compass. Caitlin Cimeno is no innocent bystander herself. On her Facebook page, she mocked a picture of a little black girl in a T-shirt that said, “Black Girls Rock.” Caitlin intimated that if she “told the truth” using the converse logic that “white girls rock” she’d be called racist. I won’t spend time explaining that any more than I spend time explaining why we don’t have white entertainment television and white history month.

White people are not that obtuse. And the ones who are are willfully ignorant.

Ain’t nobody got time for that. Instead, for those folks who consider themselves enlightened, I will simply say that one of the easiest ways to not be racist this Halloween season is to say no to blackface and tell your less enlightened friends to say no, too.

Black America and the diasporic black world thank you.