Senate candidate: Snowden is a whistle-blower, not a criminal

The long-term Maine ACLU director tells Salon she can beat Susan Collins, and calls out Congress for NSA complicity 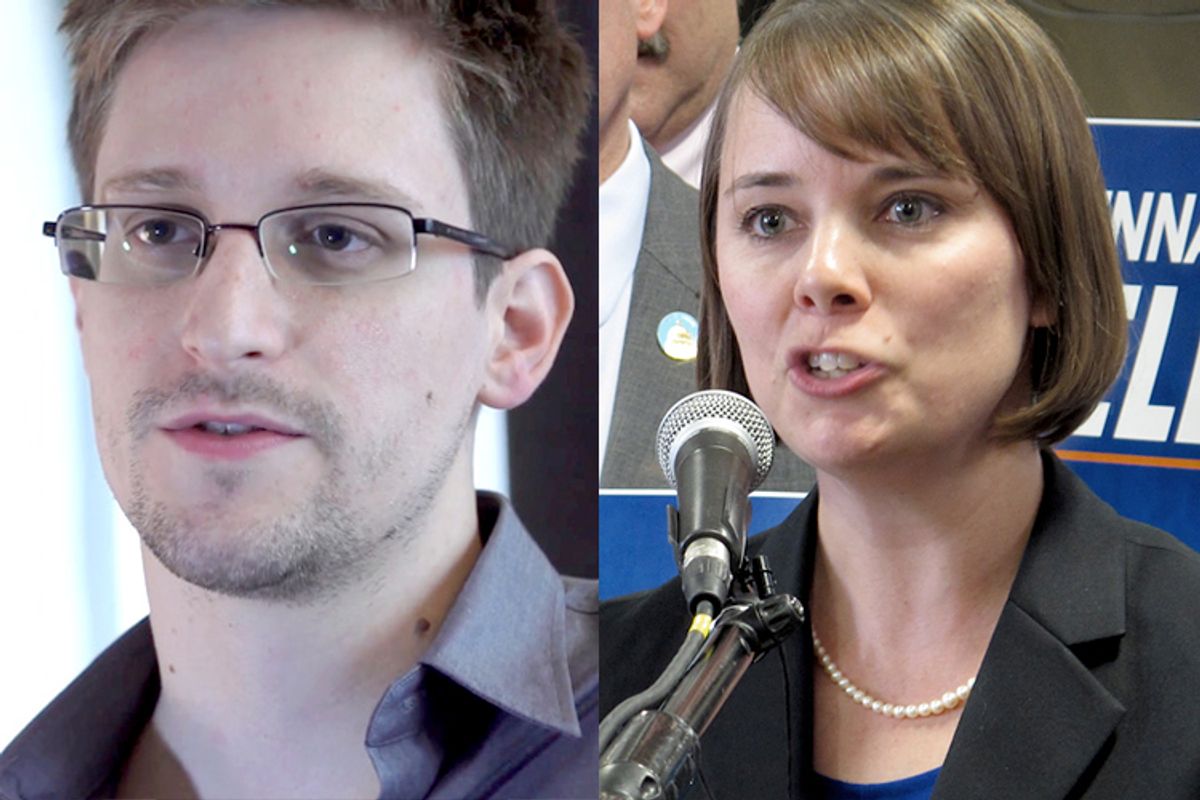 But Collins’ 2014 challenger Shenna Bellows – who directed the Maine ACLU for eight years before last week becoming the first declared contender for the Democratic nomination – says that’s not good enough. In a Tuesday afternoon interview, Bellows told Salon that politicians have “trampled on the Constitution,” and called for Edward Snowden to “be treated as a whistle-blower and not a criminal.” She also called out Congress for preferring “to scold the White House in public but codify NSA spying.” A condensed version of our conversation follows.

Sen. Collins put out a statement saying … that she’s not aware of a justification for collecting intelligence on Chancellor Merkel, and that she would be telling the German ambassador that “it was wrong” for the administration to do that. What’s your reaction to that?

We absolutely need to stop listening in on phone calls of allies like Angela Merkel. But we also need to stop spying on millions of Americans.

What do you make of the comparative attention that those two kinds of surveillance get?

… It’s certainly concerning to international relations to learn that we were spying on the phone conversations of some of our closest allies. But it’s equally important to address the issue of spying on millions of ordinary Americans.

Where would you draw the line on who the U.S. should be spying on?

I support measures to repeal the Patriot Act and prohibit the NSA from engaging in bulk data collection. The federal government should only be gathering information about Americans when there are specific and articulable facts that are actually relevant to a terrorism investigation …

I think we need a paradigm shift in our surveillance - in our approach to surveillance. For the last decade, policymakers in Washington have trampled on the Constitution and Bill of Rights, creating a constitutional crisis. This paradigm of “Total Information Awareness” undermines our democracy and threatens international relations. We need a Church [Committee]-style investigation into the nature and extent of our surveillance practices. And we need meaningful reforms to restore our constitutional freedoms and restore our trust.

In June, the president said, “You can shout 'big brother' or 'program run amok,' but if you actually look at the details, I think we’ve struck the right balance.” What do you make of that kind of comment?

NSA spying is out of control, and it undermines our democratic freedoms and is threatening our international relations and security. We can be both safe and free. We can protect our constitutional freedoms and our security.

When this gets talked about as a balance between security and liberty – is that a frame that you accept?

Benjamin Franklin famously said they who “give up essential liberty” to obtain “a little temporary safety deserve neither liberty nor safety.” We do not have to sacrifice our fundamental freedoms to be safe. Privacy is important as an individual liberty and as a building block in community trust. When the government spies on its own people, we the people lose trust in government … It’s a false choice to suggest that we need to sacrifice our constitutional freedoms for security.

What’s your assessment of the president’s record on civil liberties?

In areas of voting rights and marriage equality, President Obama has been a wonderful leader. In the area of privacy, Republicans and Democrats at all levels have failed the American people in passage of measures like the Patriot Act and in allowing these NSA spying abuses.

Here in Maine, we worked with Republicans and Democrats alike. We had a truly interesting coalition that included libertarians and progressives. And that’s why we were one of two states in the country to prohibit law enforcement from tracking people using their cellphones ... We came together and did not compromise our principles, but rather stayed united in our shared values of support for the Constitution and the Bill of Rights. We need to continue to do that in Washington. And the bill put forward by Sen. Patrick Leahy and James Sensenbrenner is a step in the right direction in terms of restoring checks and balances.

How does President Obama’s record compare to that of President Bush on the issue of privacy?

What I think that we see over the last decade is that under both the Bush administration and the Obama administration we have -- the government has allowed NSA spying to expand unchecked. And Congress has repeatedly, after passing the Patriot Act, Congress has repeatedly reauthorized these practices. Back in 2008, I led a coalition here in Maine to investigate the nature and extent of telecommunications companies’ involvement in surveillance of the phone calls of millions of Americans.

And we brought forward a complaint to the Public Utilities Commission here in Maine. [We] were moving with a state level investigation into the nature and extent of surveillance of Mainers’ telephone communications. Congress responded by passing a bill prohibiting the state from engaging in these investigations. So I think what we have seen are a series of policy decisions that have trampled on the Constitution and the Bill of Rights. What we have been able to do for Maine is demonstrated a different way.

President Obama – is he “trampling on the Constitution”?

I think it’s up to Congress to do its job and put in place checks and balances to preserve our constitutional freedoms and keep our country safe. It’s not enough for Congress to scold the Obama administration and then fail to act.

In the time since the Patriot Act was passed, has that law made Americans more safe?

There have been numerous reports from inside and outside of government that indicate that the Patriot Act has significantly undermined our constitutional freedoms without increasing public safety. We need to repeal the Patriot Act and stop NSA spying. We can be both safe and free, and this total information awareness paradigm represented by the Patriot Act and NSA spying undermines our freedoms and our security.

What’s your view of the role that Edward Snowden and the information that he released have played in shaping this debate?

I think Edward Snowden has played a very important role. I think we need more protection for whistle-blowers so that we can have an open conversation about what’s appropriate. His revelations have been a catalyst for a national conversation that we really need to have.

Should he be punished?

You know, Daniel Ellsberg wrote a really interesting Op-Ed in which he talked about how his revelations in the Pentagon Papers would not have been possible under current law that prohibits whistle-blowers from coming forward. And the ACLU and other civil liberties groups have been involved in Snowden’s defense, and I think his revelations have created a really important conversation. We have too much secrecy surrounding these programs …

Do you believe that Snowden should be either charged with a crime or detained by the U.S. government?

I do not think that speaking out about matters of national import should be criminalized.

Your career included organizing to try to stop the Patriot Act. What did you learn from that experience – what struck you about that political fight?

What I learned was the importance of reaching out across ideological lines and backgrounds to work together. At the ACLU we worked with very unusual partners. I helped organize a coalition that included the American Library Association and Veterans of America working together to try to rein in the abuses of the Patriot Act. And that became a model for the work that I did here in Maine …

I want to go back to the Snowden question. Snowden is absolutely a whistle-blower and should be treated as such. His revelations revealed government illegality and abuse of authority and we as a country depend upon truthful information about what the government is doing, particularly … when activity infringes on individual rights. So we could not have had a properly informed public debate about spying without Snowden’s leaks. Now unfortunately there are exceptions in the federal whistle-blower protection act that do not provide for effective avenues internally to report illegal activity. So I think that Snowden should be treated as a whistle-blower and not a criminal.

What I think that we need to do at the federal level is improve our whistle-blower laws so that when intelligence community employees see government illegality or violations of the Constitution, they can speak out safely.

You mentioned legislation sponsored by congressman Sensenbrenner … How much do you think the politics on these issues have changed since the period immediately after 9/11?

What we experienced here in Maine over the last decade is truly bipartisan support for restoration of our constitutional freedoms. So it’s really exciting to see today the introduction of the USA Freedom Act by congressman Sensenbrenner, who was the lead author of the Patriot Act, and by Democrat Patrick Leahy, who voted for the Patriot Act. And I think that demonstrates that people can change their minds.

Now one of the problems with the original Patriot Act is the secrecy surrounding its implementation. The ACLU is handling a case on behalf of a librarian in Connecticut who was served with an order under the Patriot Act. And the gag provision on the Patriot Act prohibited that librarian from meeting with his members of Congress when the Patriot Act was being reauthorizing to discuss that order …

I think we have a real problem with too much government secrecy … Time and time again, groups like the ACLU have challenged the constitutionality of some of these programs and the government has defended the programs under the doctrine of state secrets, and has blocked judicial review of the surveillance practices. We have gone too far – or, Congress has gone too far in allowing the actions of these spy agencies to be hidden from public view.

Congressman Rogers, who chairs the House Intelligence Committee, said that if people in France knew what was being intercepted, they would be “popping champagne corks” because “it’s a good thing” and “it keeps the French safe.” What’s your reaction to that?

But I also think that what we’ve seen over the last few months is that increased public awareness about the nature and extent of NSA spying has led to … broad bipartisan opposition to what’s being perceived as abuse of power.

It’s sometimes argued that the Obama administration in particular gets a pass [on surveillance], whether from elected Democrats or from some liberal organizations, because of [Obama] being a Democrat … Do you think that’s a fair critique?

Its been really interesting to watch the reactions of members of Congress who are scolding the White House in public, but then willing to support the NSA spying, Patriot Act, and other surveillance measures in their votes. It’s unacceptable for Congress to scold the White House in public but codify NSA spying … We need to hold all of our elected leaders accountable for the decisions that we have made that have infringed upon our constitutional freedoms and undermined our democratic institutions …

As a Republican on the Senate Intelligence Committee, Susan Collins has an opportunity to correct her past support of the Patriot ACT and NSA spying, to begin to restore constitutional freedoms.

… Why is the next step for you to run for the U.S. Senate?

Are you going to be the Democratic nominee?

Are you going to then beat Susan Collins?

I’m building a different kind of campaign. It’s a grass-roots campaign … grass-roots movements are really the only way real change has ever happened.