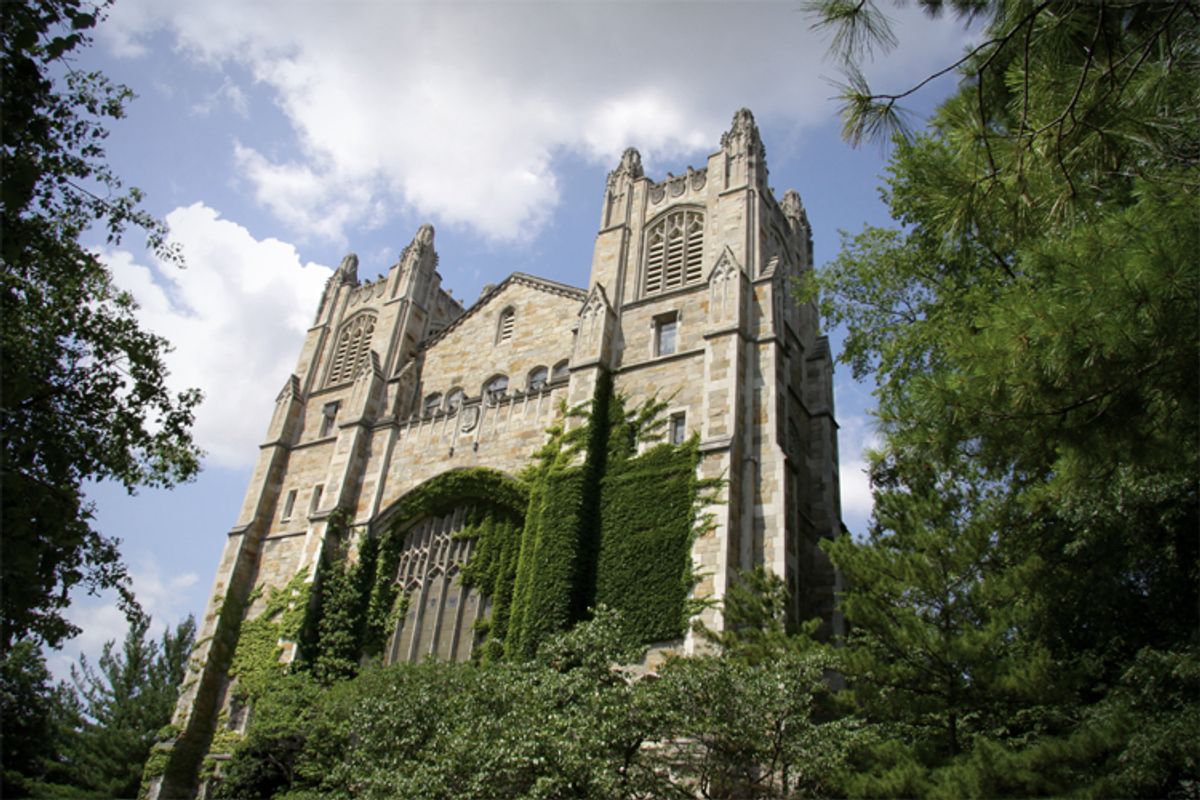 And the appropriation just doesn't stop! Fresh from our autumn of Forever 21 peddling us blond girls acting all Compton and NWA (while likely not actually knowing what where Compton is or NWA stands for) and our Halloween of unfortunate blackface incidents and white people still trying to get away with using racial slurs, a University of Michigan fraternity is now under fire for its "Hood Ratchet Thursday."

The Theta Xi event invitation had depicted an African-American man holding a wad of cash, and promised "bad bitches, white girls, basketball players, thugs, gangsters ratchet pussy" that "we goin back to da hood again!!" But University Vice President for Student Affairs E. Royster Harper sent a letter of rebuke to the frat Thursday, saying, "The language of the invitation and theme of the party denigrated all women and African American/black identified people through racial stereotypes and cultural appropriation. This behavior is offensive, disrespectful and unacceptable at the University of Michigan. It is unhealthy and harms everyone in the community. It is in direct contradiction to the values, policies and expectations of the University and will not be tolerated." The fraternity has since canceled the event and issued a formal apology. In its letter of contrition, chapter president Eric Quang acknowledges that "The words, terms, and phrases in the description of the event were very insensitive, hurtful, and offensive," while explaining that "The individuals responsible for the event would like to state that there was no intent to cause harm by way of stereotypes and other damaging views."

And in an apologetic follow-up Op-Ed for the Michigan Daily, Alan Wu, a junior and the host of the event, expanded further on the thinking behind the incident. Saying "it was never my intention to purposefully offend or degrade another culture or gender," he calls hip-hop a genre "I've grown up with and still love" and admits that "As an avid consumer of the music, it’s easy to get caught up in the lyrics and attitude." He argues that when a genre becomes widely popular, it "transcends strictly racial definitions," and wishes we "could collectively celebrate the music that we consume without aggravating racial sensitivities." And he adds that "As a fellow minority" he has "experienced firsthand how racism, whether blatant or subtle, can affect our emotions and livelihood."

Wu is to be credited for being forthright in his struggle to understand the not always easy to discern issues that the many, many of us who enjoy a variety of music genres wrestle with too. But there really is a difference between enjoying something and pretending to be it.

When Wu – who by the way doesn't seem terrifically concerned about promoting a party that promised bitches and pussy – sent out an invitation urging students to go "back to da hood," it became a game of playacting for a bunch of college students. That's the problem -- that's when it becomes a jokey and callous act. That's when it turns into, ha, ha, we're so ghetto! On Thursday after Calculus 101! Do you see how ridiculous and entitled and dumb that looks? Do you even know where the hood is, Theta Xi? Just don't.

Geralyn Gaines, a student and secretary of the Black Student Union, told a local CBS affiliate this week that she felt "complete and utter disgust" at the event, saying, "It’s scary to think that I sit in class with people who think this way and people that agree with them, people who legitimately thought this party was a good idea and was OK. The invitation amplified stereotypes and used a level of disgusting language that it was evident they actively tried to offend us." And in an editorial, student Erin Fischer pointedly explains, "I can’t take the joke because of the alarming number of fraternity brothers that have asked me if I'm from Detroit when I attend their events as one of the few women of color. I can’t take the joke because of the obscene number of times I’ve been asked to 'twerk' and 'dance' for these white men, because my Black identity obviously tells them I possess the inherent talent and desire to do so. I can’t take the joke because I don't have the luxury to remove the labels of 'hood,' 'ratchet' or 'bad bitch' after the party ends."

So have a party. Play the music. Invite everybody. Just don't be a smug, ignorant twit about it. There's difference between appreciation and appropriation, and the difference is respect, plain and simple.