How the 1 percent always wins: Liberal washing is the right's new favorite tactic

Here's why plutocrats control our politics: Corporate America knows both parties are up for sale 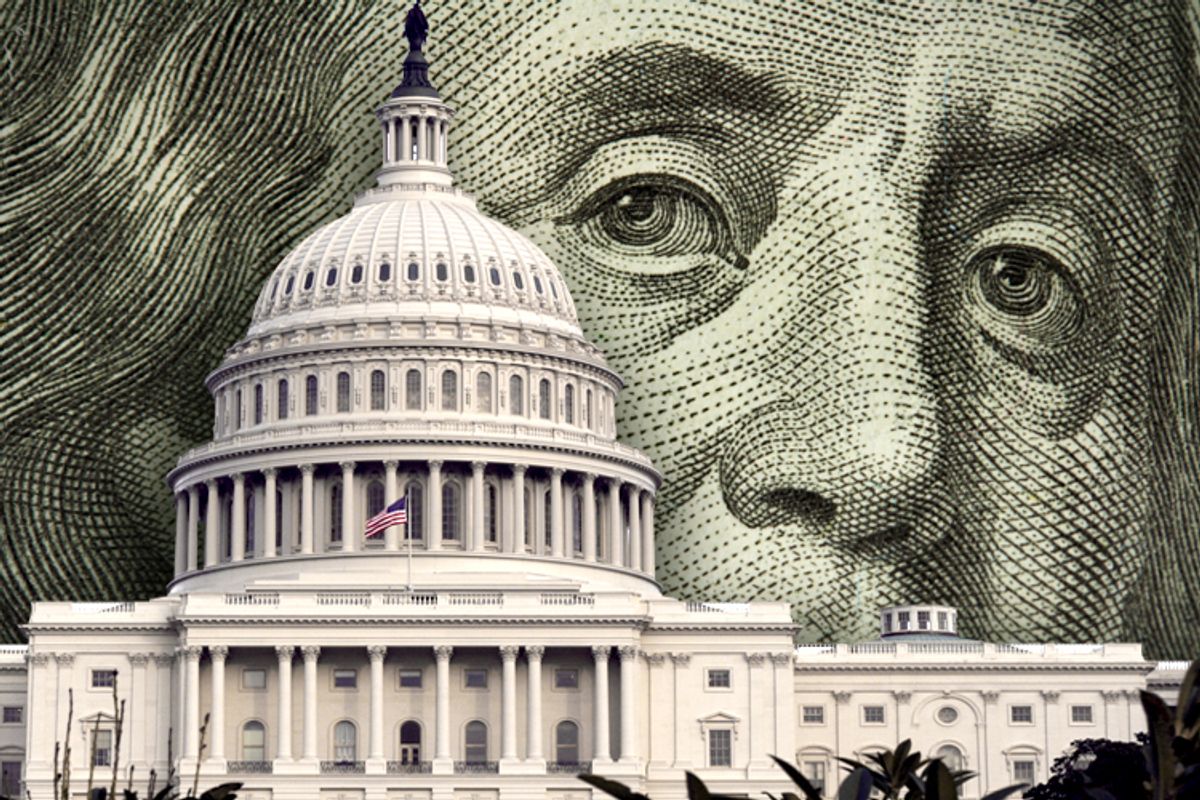 "What is most striking about the present is not the virtues of moderation but of the potential power of conviction. One detects, behind all the anxiety about 'extremists,' 'radicals,' and 'militant minorities,' a degree of envy. On the Right there is a group with enough commitment to a shared project that is willing and able to disrupt the ordinary functioning of government. If only the Left had such wherewithal. We might, at the very least, get something more than than the economically stagnant, politically oppressive Mugwumpery of the Democratic Party." -- Jacobin's Alex Gourevitch

This trenchant passage about liberals' reaction to the Tea Party summarizes a hugely significant yet little discussed truism: American politics has been inexorably lurching to the right not only because of the extremism of the Tea Party, but also because of a lack of Tea Party-like cohesion, organization and energy on the left. There are, of course, many factors that contribute to that sad reality including a successful war on the labor movement; a campaign finance system that makes conservative oligarchs even more powerful than they already are; and a mediasphere that ignores principles and tells liberals everything must be seen exclusively in partisan red-versus-blue terms. One factor, though, stands out for how it so destructively shapes the assumptions that define our political discourse. That factor can be called "liberal washing."

Liberal washing has always been around, of course. But it has really risen to prominence -- and dominance -- in modern times. Indeed, one of the most reliable political axioms of the last 30 years is this: If corporate America cooks up a scheme to rip off the middle class, Republicans will provide the bulk of the congressional votes for the scheme -- but enough establishment-credentialed liberals inevitably will endorse the scheme to make it at least appear to be mainstream and bipartisan. Yes, it seems no matter how venal, underhanded or outright corrupt a heist may be, there always ends up being a group of icons with liberal billing ready to drive the getaway car.

The most reliable way to liberal-wash something is to get a famous Democrat to support it. This is because even though many Democratic politicians, party officials, operatives and pundits are neither liberal nor progressive, the media nonetheless usually portrays all people affiliated with the Democratic Party as uniformly liberal on all issues.

The famous examples of liberal washing come from the White House. A few decades ago, Democratic President Bill Clinton liberal-washed corporatist schemes like NAFTA and financial deregulation. Today, it is Democratic President Barack Obama liberal-washing the insurance industry's healthcare initiatives and now joining with a handful of Democratic legislators to liberalwash - and legitimize - the right-wing crusade to slash Social Security benefits.

But, then, as evidenced by just the last few months of news, liberal washing also operates just as powerfully in other political arenas.

In the Congress, for example, the NSA surveillance programs that so enrich private contractors were frantically liberal-washed by (among others) California Sen. Dianne Feinstein (D.) In that case, the liberal washing served as a handsome payback for the private surveillance contracting industry that bankrolls the California lawmaker's election campaigns and her family.

Likewise, in the think tank sector, the Center for American Progress (where I once worked many years ago) is next week liberal-washing Goldman Sachs CEO Lloyd Blankfein and another Goldman executive. That's right: According to the Beltway's most prominent liberal think tank, the bailed out bank isn't the Great Vampire Squid that helped destroy the economy. It is, instead, according to CAP, an icon of "shared social goals in areas like housing, clean energy and — most recently — preventive social services." Such liberal washing is a clear P.R. coup for Goldman Sachs -- one it was probably hoping for when, according to the Nation magazine, Goldman Sachs became one of CAP's many corporate donors no doubt looking to be liberal-washed.

Out on the campaign trail, it is often the same kind of liberal washing. As just the most famous example, then-Newark Mayor Cory Booker used his billing as a liberal hero to famously liberal-wash the private equity industry's predatory business model and its anti-public school agenda. In return for his efforts, he was showered with Wall Street cash, which helped him then buy his state's Democratic nomination for U.S. Senate -- and, ultimately, the U.S. Senate seat itself.

At the municipal level, this kind of thing can be even more shameless, and it involves not only Democratic politicians but also leaders of traditionally liberal organizations. A few years ago, for example, some (but not all) prominent union leaders helped liberal-wash Rahm Emanuel. Those union leaders endorsed the former investment banker in his run for Chicago mayor, despite Emanuel being the architect of the union-crushing NAFTA and calling liberals "fucking retarded." Once elected, Emanuel used his manufactured liberal credentials to then liberal-wash a full-scale war on organized labor. That war has included school closings and efforts to privatize municipal services -- aka policies designed to undermine public-sector unions.

A similar story is now playing out in Rhode Island, where financial executive-turned-Democratic State Treasurer Gina Raimondo is liberal-washing a Wall Street rip-off plot of truly epic proportions. Championing a scheme that enriches the same financial industry that bankrolls her campaigns, Raimondo has used her public office to slash retiree benefits and divert more of the state's public pension funds into risky hedge funds. Not surprisingly, the latter move forces retirees to pay the excessive fees to the same financial industry that launched Raimondo's career.

As if underscoring the devious liberal-washing objectives, Raimondo has made sure to publicly bill her pension-slashing record as proof that she is a "progressive Democrat." Such language is the epitome of liberal washing, as it equates progressivism with slashing retiree benefits. For her efforts, Raimondo has been supported by Enron billionaire John Arnold -- who recently tried to liberal-wash himself with a high-profile donation to Head Start after he was outed as the sponsor of pension-slashing initiatives all over America (note: The humiliating stories about Arnold haven't stopped him from working with a Democratic mayor to liberal-wash a new pension-slashing initiative in California). Meanwhile, when the local union representing Rhode Island's public employees raised objections to Raimondo's pension initiatives, out came even more liberal washing, this time from former Service Employees International Union leader Andy Stern.

Having recently converted his national labor prominence into a plum position in the empire of private equity billionaire Ronald Perelman and in the education "reform" foundation of anti-teachers-union billionaire Eli Broad, Stern this weekend published a Providence Journal editorial that has to be read to be believed. He first berates unions for supposedly airing "ideologically-driven attacks" and then liberal-washes Raimondo as a populist champion of the ordinary worker. Somehow omitting the embarrassing fact that Raimondo's Wall Street-enriching moves are failing to even out-earn the fee-less S&P 500, Stern insisted that "Rhode Island should be applauded" for using more cash from public workers' retirement nest-eggs to pay the exorbitant fees of billionaire hedge fund managers and private equity executives (and potentially enriching Raimondo personally in the process).

Genuine liberals and progressives may behold all this and wonder: With friends like these, who needs Gordon Gekko? It's a justifiable harrumph. But as depressing as the situation is, the rise of liberal washing should be anything but surprising.

Sure, it may seem counterintuitive that liberalwashing has come to prominence at the very moment American politics has become more partisan. But it is entirely predictable. With politics more than ever becoming a mind-deadening video game between two principle-free teams, the oligarchy is no longer betting on one of those teams. Instead, it is employing liberal washing to hack the whole red-versus-blue operating system.

As a political tactic, it makes perfect sense. Whether it is a company, a trade association, a front group or a lobbying firm that is pushing a particular policy, corporate America knows that it has a better chance of getting its way if it can portray its goals as an apolitical agenda with support from both sides of the ideological spectrum. Liberal washing is the key to that formula; it helps depict the radical as mainstream, the ideological as pragmatic and the old-fashioned heist as an act of bleeding-heart altruism.

Until liberal washing becomes anathema to more of the genuine left, there is little chance of combating today's plutocratic politics. It is a politics that manufactures the parameters of economic debates so that only corporate-friendly outcomes are possible. It is a politics that relies as much on money and votes as on permissive semiotics -- the kind that permits labels like "liberal," "progressive" and "left" to include those who shill for the right. Only when those labels start meaning something and liberal washing is defanged can we hope to get, in the words of Gourevitch, "something more than the economically stagnant, politically oppressive" culture we're currently stuck with.