Don't call me a survivor

My cancer journey is winding down, but I'm not ready to celebrate 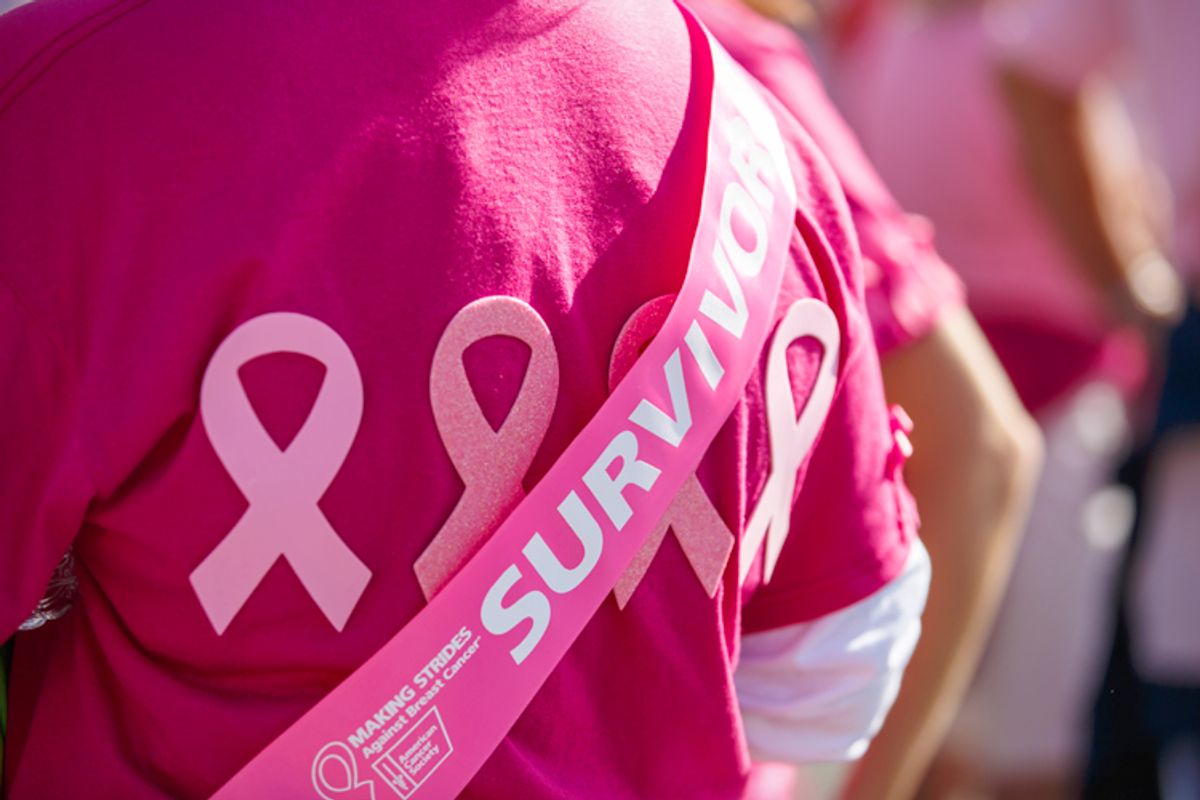 If all goes well, later this week, after two years of treatment for Stage 4 cancer and over three years since my initial diagnosis, I will have the final treatment of my clinical trial. If all goes well, my scans will say that I'm still cancer free, that my drug regimen has worked beyond all expectations. For all this, I'm exceedingly grateful. I'm proud. But don't tell me how to be happy about it.

Of course I'm humbled and awed and frequently joyful for the gift of not being dead, especially since not so long ago the odds were so much against me. I've been part of a groundbreaking medical miracle.  I have learned so much in the past few years – deepened important relationships and made extraordinary new ones. I believe it's made me a more loving, devoted, present person. And I'm also thoroughly traumatized by the whole experience. That's part of it too – a big part, in fact.

Now that we've made it through the cavalcade of chipper breast cancer "warriors," this feels like a good time to say that while support and love are necessary and wonderful, the experience of cancer is for many of us not exactly a friggin' pep rally. Cancer is so often served up as a thing to be "survived," through pluck and positivity, that the difficult and long-term effects of it are conspicuously shushed. "Survivors" are supposed to be happy and hopeful and physically strong. We're supposed to be the ones at the front of the parade, wearing a ribbon, doling out St. Crispin's Day speeches about how together! We're all going to cure this thing! Maybe by posting photos of our boobs or growing facial hair! Whooo!

Yet I often feel like a fraud when I'm included in "survivor" events, because with cancer, it's hard to ever stop waiting for the other shoe to drop. Even this milestone "last" treatment isn't the end. I started on maintenance a year and a half ago. I'll still be tested and monitored indefinitely. It's tough. So I cringe when people in the media automatically call people who've gone through cancer "brave" or "strong," because while that's nice, plenty of us have simply been doing what we've had to to live, with no particular nobility attached to showing up for doctor appointments. And I dread knowing that at any time, a person who's survived can turn into the worst kind of loser, the person everyone says "lost her battle." Nothing like dying to make you get your bright side privileges revoked. Earlier this year, Gathering Place, a cancer support center in Cleveland, removed a photo exhibit on a woman's terminal experience of cancer because they deemed it "very difficult and emotionally upsetting." As author Laura Zigman once said, "If health is a metaphor for success, then illness is a metaphor for failure." A failure that can be as close as the next set of scans.  That's why sometimes, I don't want to be a cheerleader. Sometimes, I just want the freedom to say, "You know what? That thing that happened to me? That kind of sucked."

When I spoke recently to Rebecca, who's been in remission from acute lymphoblastic leukemia for 10 years, she said she faced health problems long after treatment ended. "My thyroid went on strike, my immune system turned against me," she said, "and because my microbiome had been wiped out by chemotherapy and heavy antibiotics, I could barely digest my food, resulting in a surprise appendicitis a year later." She adds, "I can't say much for the psychological aftereffects of cancer treatment, because I can't even remember where I buried those ... It will be good for more people in and out of the healthcare community to know that evading cancer doesn't always feel like a celebration." Zigman compares cancer to motherhood: "YOU CAN NEVER WIN. Everyone ALWAYS has an opinion. Mainly, that you SUCK and ARE DOING IT WRONG." And my friend Frank says, "Incontinence, impotence, and repeated catheterizations. I have overcome all of these issues, which makes me happy and even somewhat proud. But I have to admit to an occasional melancholy that I cannot control."

For me, the price of living has been two major surgeries and an at times grueling regimen of treatment. It's been 5 cm off the top of my head, a small portion of my lung cut out, a variety of scars and several blown out veins. Recently, two close friends have both been rediagnosed, and I am furious and terrified and irrationally full of guilt that I get to come back from a horrible place and they're still there. So you'll have to excuse me if my "yaaaaaaay" is a bit restrained today, but I am emotionally and physically wrung out.

When you live through a life-threatening experience, whether it's a war or an act of violence or an accident or a disease, if you are very lucky, there's a lot of love and hope and gratitude on the other side of it. But the love and hope and gratitude are bound to be fused in there with the fear and the pain and the grief. I am never, ever, going to be "back" to "normal" now. That isn't necessarily a terrible thing. It can be rather beautiful at times, when I let it in. And I'm telling you this because maybe your sister or your dad or your co-worker or your patient is out of treatment and disease-free right now, but that doesn't mean that person's new job in life is being an inspiration to everybody else. That person could be dealing with a body that's vastly different, or a psyche that is only now getting out of survival mode. I want you to know that when we're sad or teary or generally aren't behaving like we just won at Powerball, it's OK. We can be grateful without being endlessly upbeat. We can be hopeful while being afraid of recurrence. And we can live every day knowing that, as Rebecca says, "The disease doesn't go away after it's cured."