America's grotesque amusement: The joke is on black women again

Kerry Washington's appearance on "SNL" was seriously funny this weekend. But here's why you won't find me laughing 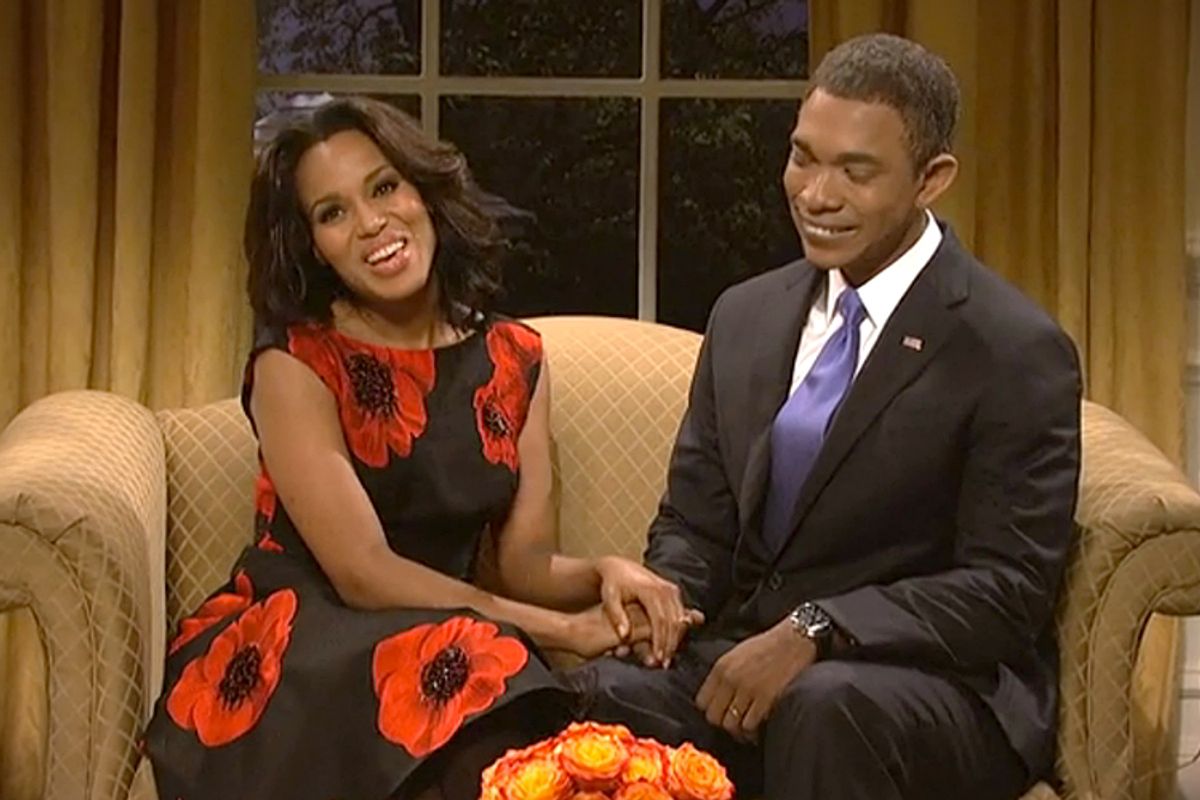 This past weekend, Kerry Washington became only the eighth Black woman to host "Saturday Night Live."  The paltry representation of black women on "SNL" is obviously shameful: In the 38-year history of the show, there have only been four black women cast members, averaging about one per decade.

The show attempted to poke fun at its own sexualized racism (and racialized sexism) without of course ever calling it that, by putting up a statement apologizing for its lack of black female cast members -- after a particularly funny sketch in which Kerry Washington was asked to play Michelle Obama, Oprah Winfrey and Beyoncé in a span of about five minutes.

Unfortunately, the show undercut its own attempt at self-deprecation, by ending its public service announcement by saying: “we agree this is not an ideal situation and look forward to rectifying it in the near future … unless of course we fall in love with another white guy first.”

I get the attempt at irony. But who ain’t laughing is me. How can I, when the joke seems to be on black women?

Why is it that Americans are infinitely more comfortable with black men playing sassy, matronly black female characters in drag, as Kenan Thompson frequently does on the show, than with black women playing black female roles? Drag can be generative and subversive, but in this case, it just seems oppressive.

When Thompson came under fire a few weeks back for insinuating that "SNL" casting directors struggled to find black women who were “ready” to do comedic roles, he attempted to justify the systematic ignoring and excluding of black women from "SNL" by arguing that they’re simply unqualified to do comedy. Racists deploy this kind of argument to justify why they don’t have people of color employees and men make these kinds of arguments to justify not hiring women for top leadership positions.

But I’d venture to say that Americans in general are the ones who aren’t ready for black women to step outside of the most narrow and stereotypical racial boxes that have been cast for us. Thompson himself failed to recognize the ways in which his success on the show has been predicated on the exclusion of black women, while also being indebted to black women’s cultural traditions.

Thompson is not unique in his appropriation of black female labor and culture for his own success. Tyler Perry’s most successful character is Madea. Martin Lawrence’s most recognizable character is Big Momma. While black women are often told that these characters are an homage to black women, not allowing black women to play themselves is nothing to celebrate.

The ways in which black men collude with white power structures to deny black women access to spaces of cultural production is not a problem unique to hip-hop. In fact, much as Thompson argues, many male rappers would have us believe that the only reason Nicki Minaj is the most recognizable female emcee in the game is because women simply aren’t as talented as men. Many of these men fail to use their considerable pull with white corporate record executives to advocate for open doors for women. This is why the Grammys have not had a category for best female rapper since 2005. In the world of "SNL" Kenan Thompson plays a similar role: He seems to relate far more to the executives at "SNL" who couldn’t resist reminding us of their perennial love of white guys than to the black women who provide the comedic fodder for his sketches.

Cable and Web-based shows have stepped in to do some of the cultural heavy lifting, offering amazing acting from black women in shows like "Orange Is the New Black," "Awkward Black Girl" and "American Horror Story." I also eagerly await BET’s new scripted drama "Being Mary Jane."

But these shows only mildly offset the cultural train wrecks of reality television that continue to perpetuate the worst stereotypes of black female anger, back-biting, hypersexualization and more. I’m not saying that I don’t like reality television. I do, and I usually choose one show per season to follow.

But there is a reason that black women have gained such heightened visibility as the denizens of ratchet ghettoized glamour on shows like "Real Housewives of Atlanta," "Love & Hip Hop" New York and Atlanta, "Basketball Wives" and more. Structurally, these shows require the most intrusion on people’s personal lives while also providing little job security or stability.

And by perpetuating the lie of the real, or the idea that these shows offer us a window into “reality,” it becomes all the more difficult to get an accurate picture of black women’s humanity.

Not that fans of these shows are especially interested in that in the first place.

Black women watch because in a desert of black female representation, even the most poisonous well of water can look like an oasis. Others watch for pure “entertainment.” But popular entertainment in the U.S. has never been a pure category. Peering and jeering at black women who tell fantastical tales, sing songs and recount bawdy stories has been an American cultural fascination since the 1830s when P.T. Barnum employed a black woman named Joyce Heth as a cultural performer. Joyce Heth claimed to have been George Washington’s 160-year-old former nursemaid.

She sat in a cage for hours each day while circus goers came by and peered at her body, listened to her unbelievable tales and tried to examine her physical body. Joyce Heth, according to Benjamin Reiss, was one of the earliest images – if not the earliest—of a black woman to appear in newsprint.

Black women’s long historical status as a kind of grotesque amusement for the American public informs the way we understand and interact with black women performers today.

The successful and complicated portraits of black women that emerge from the work of women like Shonda Rhimes, Kerry Washington, Issa Rae, Oprah Winfrey and some of the shows at OWN, and Sundance Award-winning filmmaker Ava Duvernay suggest that the tide may ever so slowly be turning.

But this cultural turn will not be complete until America falls out of love with white men.