Tearing out asbestos with bare hands: Meet the boss from hell 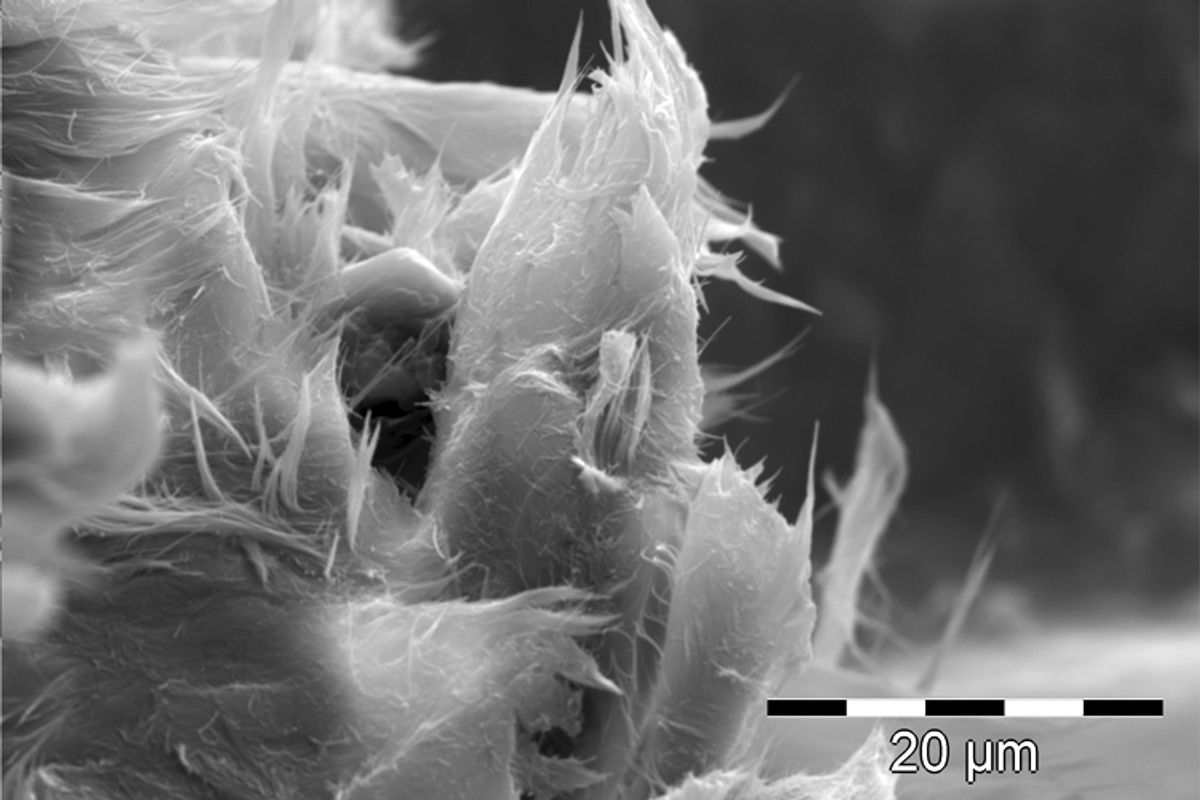 A group of immigrants allege their boss wielded their status as a weapon when they stood up to extreme abuses: from hanging from the top of a four-story building without scaffolding, to removing asbestos without gloves.

New Jersey Senator Robert Menendez told Salon those allegations illustrate the urgency of passing an immigration overhaul. “Clearly, what happens is: When someone is undocumented they can be exploited – and they frequently are,” Menendez said following a Friday press event with the workers. “And once they try to organize in order to get better wages, working conditions, they immediately are fired. And sometimes, even worse, they are told they are being reported to immigration as a way to keep them subjected to the discrimination and exploitation.” He added that such retaliation "hurts all workers” and “presses down wages for all in that universe.”

The four immigrants who joined Menendez were fired last year by Benjamin H. Realty, a New Jersey apartment company, during a union organizing drive by the Laborers International Union of North America (LIUNA). They told Salon that before their firings, the company had directed them to do unsafe work. “The worst thing was the asbestos,” said Isaac Hernandez. He said he was “100% breathing this stuff in” in a tight crawl space without warning or proper equipment, and “we went with our clothes home, so not only were we exposed – our families were exposed.”

His co-worker Daniel Quintana told Salon that years back he removed asbestos with bare hands after “the supervisor said, ‘No, this is nothing.’”  Another worker, Rodolfo Cax, described doing brick pointing on the mortar of a four-story building without a scaffold or harness. He said he was “hanging" from the top with co-workers holding his legs, and a supervisor told him “nothing’s going to happen – we’ve got you.” “I was scared doing this,” Cax told Salon, “but we’ve got no choice…If I don’t do this, he’ll fire me.” His co-worker Fabian Londono Taborda said, “They say if you don’t do, we’ll find someone else.”

LIUNA contends that because of the workers' involvement in the union effort, management seized on their immigration status as a reason to fire them less than two weeks before a November 2012 unionization election. “When they found out that there was going to be an election and there was an election date, that’s when it all went down,” said Hernandez. He told Salon that he provided an already-expired work permit when he was first hired eight years earlier, and the company paid him by personal check, but “when I got fired, that’s the first thing they showed me” – that the permit had been expired. “They told us that if we weren’t able to work in the US, that they would have to evict us from where we lived” in employer-owned housing, added Hernandez. (According to LIUNA, when the remaining workers voted on unionization, the vote was 6-6, plus one challenged ballot that was revealed in June to be a yes; following a legal challenge on the grounds that the NLRB lacked a quorum last summer, the Labor Board this week declared that the union won last November's election.)

Benjamin H. Realty denied the workers' allegations. The company’s labor relations attorney, Steven Horowitz, told Salon over e-mail, “The fact that the Union is now seeking to pressure this employer through the media further demonstrates the lack of merit to their cause.” He accused LIUNA of employing “lies and deception,” and said, “With regards to the Safety allegations, my clients deny these acts ever occurred, or that any employee was ever so directed.” Horowitz noted that the company had reached a settlement with the National Labor Relations Board on workers’ allegations of illegal termination, and said that “It was expressly stated in the Settlement that Benjamin H. Realty denied any violation of the Labor Laws of this country.”

According to a letter from the NLRB provided to Salon by LIUNA, the company agreed to participate in a government-provided webinar; to post a workplace notice making commitments including “WE WILL NOT subscribe to or use the Federal Government’s E-Verify system to re-verify your documented status because you support the Laborers Union or any other union”; and to reinstate the four workers if they provide immigration documents “in a reasonable time” that allow the company to legally employ them.

Senator Menendez, LIUNA, and the National Day Labor Organizing Network hailed a further move by the NLRB: the Labor Board has certified the four workers for “U visas,” a special category of visa allowing immigrants who’ve experienced serious crimes to stay in the country. Such visas have nearly never been issued due to labor abuses. The group the Laborers call “the Benjamin H. Realty Four” are the first to be certified for U visas by the NLRB itself, a precedent Menendez told Salon was “very, very significant.” As Salon first reported, a group of guest workers who faced alleged forced labor at the (since suspended) Wal-Mart supplier CJ’s Seafood were certified for U visas by the Department of Justice last year.

Expanding the use of U visas to protect immigrants who are punished for organizing is one of the reforms in Senator Menendez’s POWER Act, a version of which appears in the immigration bill passed by the Senate in July. Menendez told Salon the Benjamin H. Realty workers’ allegations offered "a perfect example of the type of reason why my legislation is so critically important.” Menendez argued the bill “would go an enormous way to being able to ensure that discrimination and exploitation couldn’t take place in the country without a remedy.” He called protections for immigrant workers “enormously important” in improving labor rights for workers more broadly in the US, a goal he argued had also been advanced by the Senate finally confirming a general counsel and a full complement of members to the National Labor Relations Board.

Labor groups often argue that the NLRB’s slow timeline and limited remedies – the worst penalty a company can pay for illegally firing an activist worker is generally bringing them back to work with back-pay – make flouting the law and purging activists a sound business investment. According to a study published by the progressive Economic Policy Institute in 2009, allegedly illegal terminations of union supporters mark a third of government-supervised unionization elections. Advocates argue that current immigration law gives bosses a particularly acute power to repress organizing by undocumented immigrants or guest workers, As I reported in September, a group of Jamaican guest workers accused the cleaning company they worked for of writing them paychecks for zero dollars and zero cents – and stapling letters to checks threatening them with deportation.

The Senate bill already falls short of some advocates’ hopes. Congressman Luis Gutierrez, perhaps the House's most outspoken immigration reformer, told Salon last month he’d “already seen conditions that I thought would never be agreed to, agreed to” in the Senate, though he’d still “vote for that bill in a heartbeat.” The AFL-CIO’s Ana Avendaño told me in July that “there can be no further erosion of rights, and we’re protecting that as it goes to the House.” The Senate bill’s path to citizenship includes a near-continuous employment requirement and a criminal conviction exclusion, as well as a requirement companies employ the status-checking program E-Verify. Asked whether he was concerned that such provisions would leave a subset of immigrants more vulnerable to employer abuse than before, Menendez told Salon it was “at the extreme of thought” to think that “any group of workers would be worse off with the legislation than without it, because they have no rights whatsoever right now.”

Even with those concessions, comprehensive immigration reform faces a steep climb in the Republican House. “I do believe that something’s going to give,” said Menendez, “because the politics of this doesn’t work for the Republicans.” He described “growing pressures within the House to ultimately allow something to happen, whether it’s a vote on the Senate bill” or “some piecemeal that at least would get us to a conference” committee tasked with reconciling the two bodies’ bills. He said continuous employment was one of the issues “we dealt with to some degree and will continue to deal with, to perfect, as we get to the final piece of legislation.”

Asked if he would accept an ultimate bill that was more restrictive or punitive than the Senate’s, Menendez told Salon that he was “the strongest advocate” within the Senate’s “Gang of Eight” for a pathway to citizenship, and for ensuring “the pathway was viable in being able to be achieved by anyone, even if it was a bit arduous…I’m not about to give up on that core principle.” He said that unlike those who “would prefer the ideal which would never become law,” he would “keep an open mind as to what any potential negotiation would be. But there are certain core principles that I’m not going to equivocate, and the pathway is one.”

Isaac Hernandez told Salon that he was glad he’d chosen to organize. “Before that, everything we did, or anything that happened to us, nobody – we didn’t have a voice,” he said. “Or we didn’t think that anybody would hear us.”