On second day of a strike, labor group to unveil latest tool for combining the Web with old-fashioned organizing 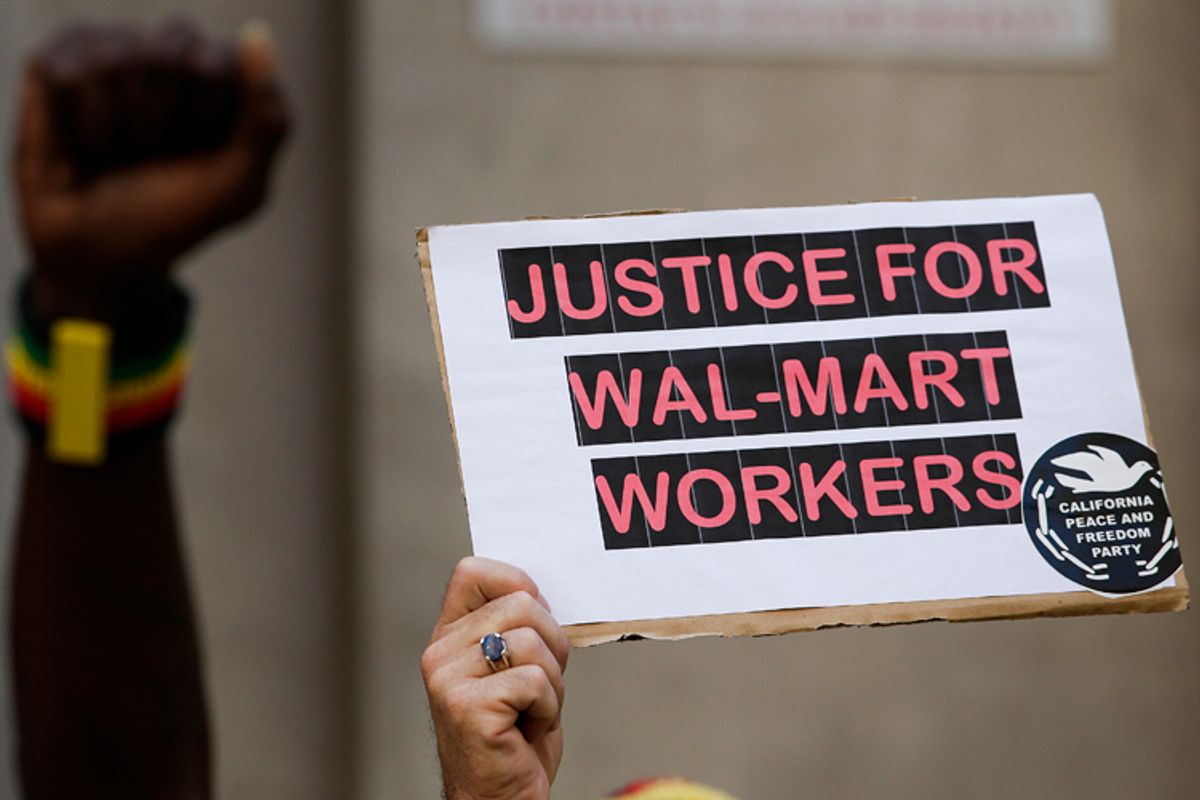 One day into the latest Wal-Mart strike, the union-backed OUR Walmart campaign plans to unveil a new website on which employees can anonymously request protests at their store. The campaign said the website, which was announced to OUR Walmart members in a Wednesday afternoon email, had drawn at least 90 “hand-raisers” to speak out online by midday Thursday.

“Please, show your support for your fellow associates by sharing your own story here,” striking Los Angeles Wal-Mart employee Juan Bacerra urged other workers in the email sharing the site.

The website, associatevoices.org, includes a U.S map showing which Wal-Mart stores have generated comments or protest requests. It’s OUR Walmart’s latest effort to harness the Internet as a handmaiden to labor organizing. Someone identifying as an Eldon, Mo., employee left a comment on the site seeking “transparency” about job openings and saying, “I believe sexism is also a serious problem, as the man’s side has been consistently taken whenever such situations occur.” A Houston commenter identifying herself as Gabriella marked that she’d like a Black Friday protest at her store, and said managers “talk to you like you are they children” and “give you hell” when you’re injured at work.

As I’ve reported, OUR Walmart – closely tied to the United Food & Commercial Workers union – has made extensive use of websites and social media both to target Wal-Mart’s brand and to engage and identify potential supporters among the retail giant’s 1.3 million direct U.S. employees. OUR Wal-Mart staff and worker activists created and maintain a web of public and private Facebook pages, including pages devoted to fired workers, LGBT workers and pregnant workers (“Respect the Bump”). Workers monitor Facebook discussion threads and reach out to remote co-workers they hope to win over.

Tupelo, Miss., employee Cory Parker told me last year that he first learned about OUR Walmart when a co-worker sent him a Facebook message about the group. From there, he signed up to join a national conference call; the Wisconsin worker-activist who’d hosted the call followed up with him afterward on Facebook; they spoke one-on-one by phone; and then OUR Walmart dispatched organizers to meet with Parker in Tupelo and help him organize co-workers face-to-face for last November’s “Black Friday” strike.

Anonymous comments offer a less direct route to face-to-face contact, let alone strike mobilization (while the campaign acknowledged that it couldn’t verify each commenter was an employee, it contends that the specificity of many comments suggests they were indeed written by Wal-Mart workers). But the campaign told Salon that the website would provide an outlet for workers too scared of retaliation to go public, and that seeing which stores generate anonymous outcry or outreach will help the group prioritize its efforts in the lead-up to this month’s “Black Friday” strike the day after Thanksgiving. It said it has also identified over a dozen visits to the site from Wal-Mart’s corporate headquarters in Arkansas. OUR Walmart’s protests have included a mix of striking workers and community supporters, some of whom “adopted” stores through the allied activism hub Corporate Action Network.

As I reported, OUR Walmart members in Southern California yesterday began the group’s first multi-store strike since Wal-Mart’s termination of 20 employees who had joined a work stoppage and caravan to Wal-Mart’s June shareholder meeting. OUR Walmart told Salon that a single-store October walkout by Hialeah, Fla., workers won concessions from Wal-Mart including the transfer of a manager and payment for the hours spent on strike. According to organizers, at least 100 Wal-Mart employees joined protests yesterday; a downtown Los Angeles rally later today will include what the campaign expects to be the largest civil disobedience protest in Wal-Mart’s history.

Asked about the strike, Wal-Mart spokesperson Kory Lundberg referred Salon to his previous comment that the company “provides associates with more opportunities for career growth and greater economic security for their families than virtually any other company in America,” and added that “all of stores across LA country were fully staffed and taking care of customers all day yesterday and will be doing so again today.”