The fish we don't eat

There are plenty of (delicious) fish in the sea. So why are we stuck on salmon and cod? 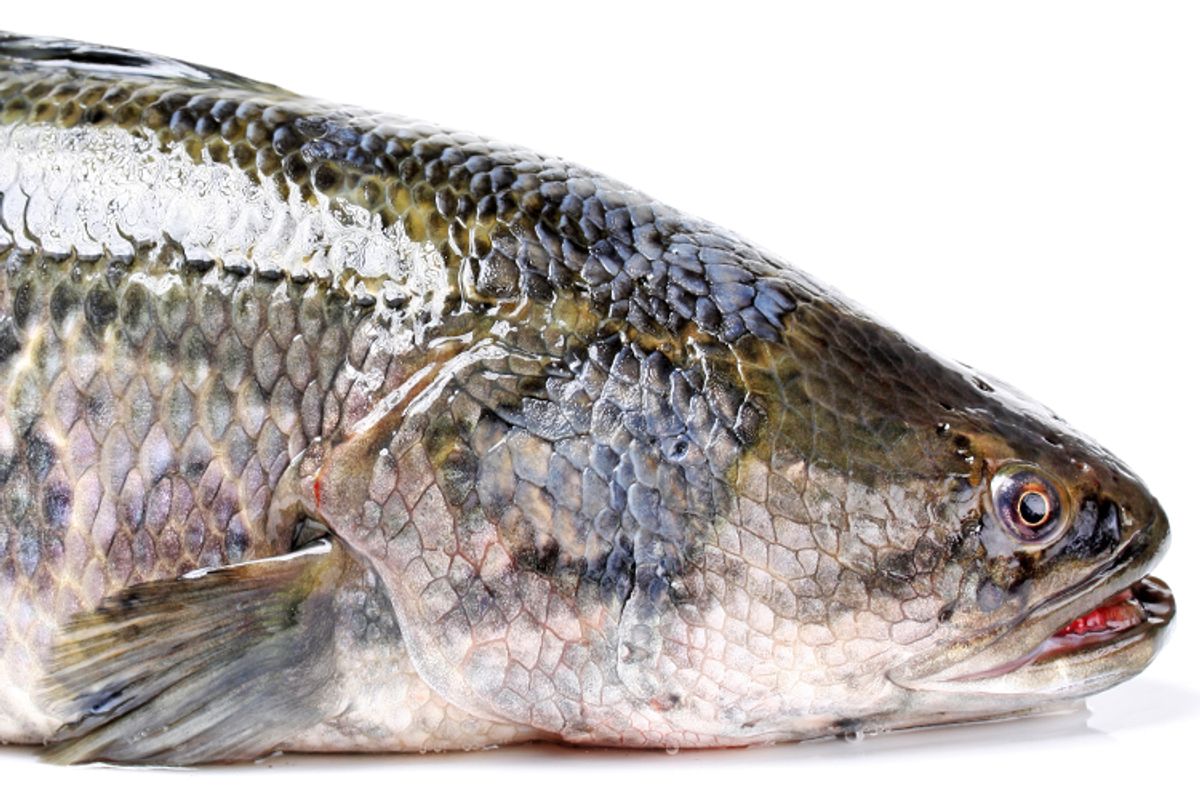 It's hard to imagine just how many edible fish there are until you see them arrayed in their multicolored, multi-finned glory. Lobster Place, a bustling seafood shop in the center of New York’s Chelsea Market, is a good place to start. The store’s open display cases hold live sea urchins that respond to the touch; fat, juicy chunks of Hawaiian Wahoo; gigantic, whole tilefish that stare, glassy-eyed at the curious consumer; and other offerings that, were they not labeled, you’d need a degree in marine biology to recognize.

Some, like baby squid and octopi, razor clams, and fillets of specialty catch that retail for upward of $25 per pound, might intimidate the standard home chef in search of something to serve for dinner. This is intentional. Chelsea market draws tourists, upper-class gourmands and Food Network fans in search of weird fish that’s hard to find anywhere else.

Other offerings, though, are just … different. There’s no reason to believe most of the fillets priced by the pound are less tasty or harder to cook than typical supermarket fare. Yet Davis Herron, Lobster Place’s director, says standard fillets of salmon, tuna, cod and halibut are still the specialty market’s biggest sellers.

It’s no coincidence that the most endangered fish are also staples of the American diet. When we talk about overfishing, we’re referring to individual species that consumers -- and the market – latch on to, often to the exclusion of other options. As much as we extoll the virtue of seafood, our enthusiasm for those select few suggests, we’re really not all that comfortable with it.

“There’s a fear of seafood,” said Rick Moonen, a renowned seafood chef who was one of the first to advocate sustainable fishing. “For some reason, people get nervous.” Fish are complicated, expensive and easy to overcook. They’re laced with small, sharp bones ready to choke the incautious diner. They smell. The limited number of species we stick to aren’t exceptions, but at least they’re familiar. Yet by refusing to broaden our options, we’re threatening to eat them out of existence.

Cod has been an American favorite since the 17th century, when early American settlers found that the species packed the Atlantic Ocean seemingly as tightly as sardines in a can. Colonial fishermen in New England merely had to lower their baskets into the water and watch them fill up with fresh catch; 250,000 tons were caught annually off the coast of the U.S. and Canada right up until the 1950s, when large factory trawlers arrived.

In the half-century since, cod has become a poster fish for what happens when a species becomes too popular. We’ve been eating the mild, flaky whitefish at such a rate that in the mid-'90s, the entire Atlantic population came close to commercial collapse. It’s survived, so far, but barely: Just this year, the amount of cod that fisheries are legally allowed to harvest from the Gulf of Maine was cut by 80 percent. Fishermen who rely on the catch decried the regulations for their perceived harm to the industry; regulators, in turn, tried to explain that this is the last hope for there being any cod industry at all. As an NOAA administrator explained when the cuts were announced last January, “It’s midnight and getting darker when it comes to how many cod there are.”

While that drama plays out in the Gulf of Maine, haddock swims by unperturbed. A mild, flaky whitefish, it swims the same waters as cod, and it’s more abundant. Lobster Place displays fillets of both next to each other; when I visited, they cost the same per pound. To the extent that there’s a difference, it’s mainly the name, and in the fact that only one is being overfished. How come cod is one of the market’s most popular fish, while the haddock, in Herron’s experience, is more difficult to sell?

“New York is a cod market,” is his only explanation.

Lobster Place doesn’t even bother selling another mild, flaky whitefish that is currently more plentiful than cod or haddock. The Atlantic spiny dogfish is caught off the shores of the eastern U.S., and in recent years, its population has exploded. In 2008, the Northeast and Mid-Atlantic Fishery Management Councils, which regulate fishing in federal waters, had imposed a quota of 8 million pounds on the fish. By 2012, as the species replenished, they bumped that number up to 20 million, and fishery attained the Marine Stewardship Council’s certification of sustainability. This year, the quota more than doubled, to just over 40 million. “It’s a locally caught, wild fish that can be fished at sustainable levels,” is the pitch that John F. Whiteside, Jr., an attorney who represents the Atlantic dogfish fishery, gave me.

The Atlantic dogfish is much more popular in Europe, where the British deep-fry it as an alternative to cod in fish and chips. Five months into the fishing year, only 25 percent of its quota has been met, meaning there’s plenty to go around.  But if you live in the United States and would like to try it – if you live, even, in New Bedford, Mass., where two of the three seafood processors that handle spiny dogfish are located -- you can’t buy it. All of the Atlantic catch is shipped abroad, because the U.S. just isn’t a spiny dogfish market.

“Certain fish have a great name,” Moonen said. Others don’t  It’s as simple as this: most would hesitate before eating something called a Patagonian toothfish, but the same fish became an American sensation once a shrewd fishmonger rechristened it Chilean sea bass.

“A lot of people think we should give it a different name, but I’m not convinced,” Whiteside said about the spiny dogfish. After all, he points out, catfish does fine. And while attempts to give out free samples have resulted in more than a few confused 20-somethings thinking they were lining up for free beer, he insists that once people try it, the name ceases to matter.

To get people to take that first bite, it can help a fish to have someone with credible taste to vouch for it. Certain restaurants – Herron mentioned New York’s Le Bernardin -- have enough cachet that diners will try just about anything the chef puts on the menu. Herron, who supplies a number of restaurants, has been known to try and talk respected chefs into trying something different. With less esteemed establishments, though, he’ll often run into the same problem that comes up with his own sales. Places don’t want to stray from the familiar favorites, because they know they’re what people want to order.

Rick Moonen is one those chefs interested in trying new fish, and with the prestige to back up his recommendations. He insists that he isn’t trying to serve “creatures from the black lagoon” at his Las Vegas restaurant, but nonetheless finds that anything deviating from the mainstream can be a tough sell. The key to getting at least some people to try something new, he said, is cross-marketing: few customers will look at a menu and be immediately grabbed by Petrale sole. But put a crabmeat crust on it, and “you’ll sell the heck out of it.”

For chef Peter Hoffman, a locavore celebrity in the New York restaurant scene, it all goes back to the fear of fish – and to our desire to see our seafood as anything but. People prefer chicken-like fillets, he said, which keeps us from being willing to try out small fish, like his favorite: the porgy. Getting the meat off the bones of small fish isn’t worth the effort for fishermen, and people don’t tend to buy whole. That’s especially a shame, said Hoffman, because cooking whole fish is actually one of the easiest ways to do it. For less-experienced chefs, as he puts it, “The chances of culinary excellence are higher.”

Regardless of how they go about it, fish need great salesmen, because attempts to market them come with a small margin of error. Meat can stay refrigerated for weeks, but fish doesn’t stay fresh for long. Catch reaches retailers days after it’s harvested, said Herron, who then typically only have another day or two to get it into customers’ hands. That doesn’t leave the seller, ever-conscious of his profit margin, much time for cajoling someone into trying something new.

The simplest way to make a fish catch on – that speaks much strongly to our unadventurous tendencies -- is just to call it salmon. That may well be why spiny dogfish, called “rock salmon” in England and “little salmon” in France, works so well for Europe. The salmon trick seems to work for just about anything: When it appears on his menus, Moonan tells his staff to refer to Arctic char as “salmon lite,” and what he calls steelhead salmon is actually trout.

Regardless of how salmon-y these alternatives are, we need them, because demand for the pink fish far outpaces what wild populations are able to supply. Customers who have learned to turn their noses up at farmed salmon, said Herron, have been known to insist upon purchasing the wild variety year-round, relying, when it’s out of season, on wild cuts that, as he puts it, “taste like shit.”

One of the best alternatives may be the barramundi. In the wild, barramundi can be found swimming in the waters of the Indo-West Pacific. A large fighter, it’s a popular with recreational fishers armed with a line and rod. And unlike salmon, as Brian Walsh wrote in Time in 2011, the fish was born to be farmed.

Barramundi was brought to American consumers via a single operation: Australis, an aquaculture facility located in Turner Falls, Mass. The clean, indoor tanks in which barramundi are raised pose no disease or escape risk. The fish itself evolved, in the wild, to thrive in tightly packed, stressful environments, and it subsists on a mostly vegetarian diet. High in omega-3s, it’s increasingly recognized as a superfood, and it is, by common consensus, delicious.

Small, mild and easy to pan-sear, it too, Herron said, has trouble gaining traction among his customers – perhaps because wild barramundi has a reputation for tasting “swampy.” The farmed variety sold by Australis, though, is very clean. It’s superior, for an eater, to the wild version. And from a sustainability perspective, it’s a better choice than salmon, too.

I would be loath to give up salmon completely, and I imagine many would agree. But there’s a place for barramundi alongside the old favorite. Incorporating more of it onto menus and dinner tables would ease pressure on salmon populations, and it would also mean adding variety to our diets. As Hoffman put it, “there are so many flavors out there.”

“Good” seafood, after all, can mean many things: health, taste, price, availability and the impact eating it will have on larger systems all need to be taken into account. Some fish fit some categories better than others; few fit all. “Everything we carry has some redeeming quality,” Herron told me. The more we vary what we’re willing to eat, the closer we can get to achieving a better balance.