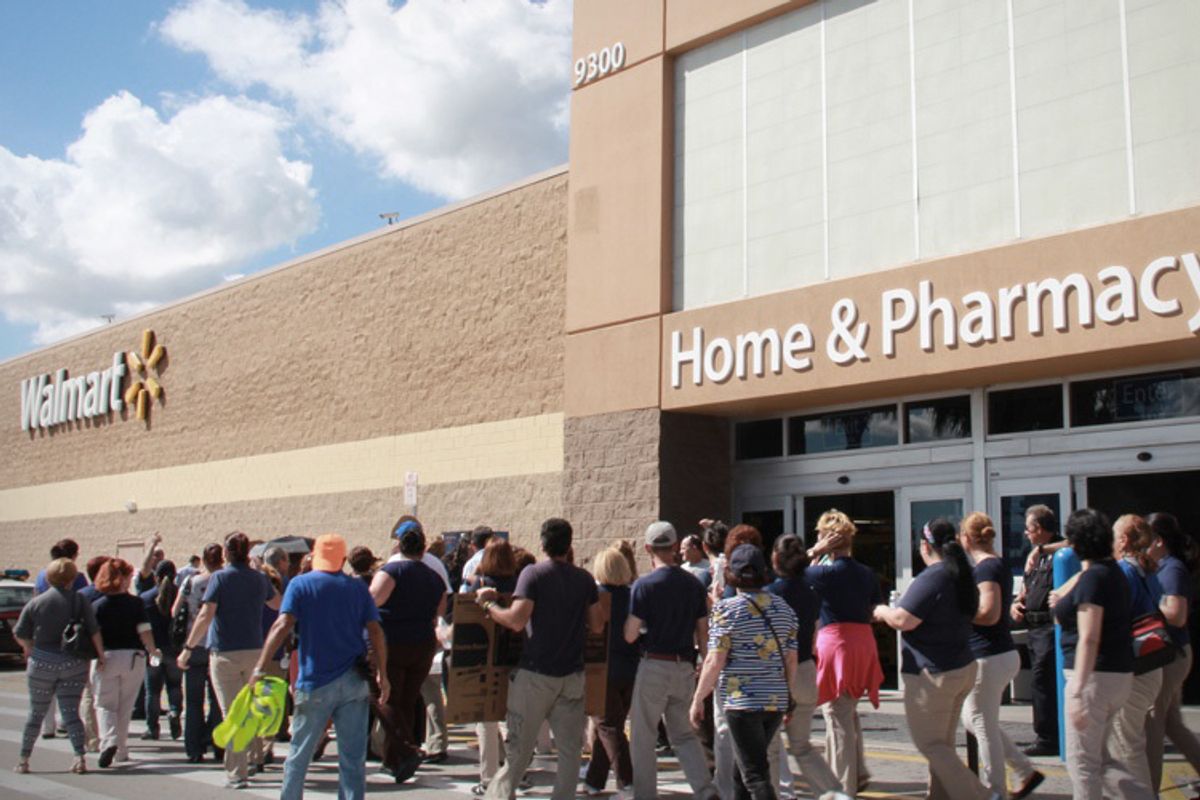 Leading environmental groups blasted Wal-Mart Wednesday, as employees in Chicago became the latest to walk off the job.

“Wal-Mart has a proven track record of failure when it comes to the environment,” said Michael Marx, who directs the Sierra Club’s Beyond Oil campaign. Marx was joined on a Wednesday media call by leaders from Greenpeace and the Rainforest Action Network, and by the Institute for Local Self-Reliance’s Stacy Mitchell, the author of a new report questioning Wal-Mart’s claims of environmental leadership. “Wal-Mart is the epitome of a key trend in our society that needs to change…” charged Greenpeace USA Executive Director Phil Radford, “companies and their executives making billions of dollars by pushing the true cost of their work onto society.”

The report, Walmart’s Assault on the Climate, critiques Wal-Mart’s record over the eight years since its high-profile announcement of new sustainability goals. Mitchell charges that Wal-Mart’s reported greenhouse gas emissions have risen by 14 per cent since 2005; that its self-reported stats fail to account for major impacts in its supply chain; that its claims regarding sustainability in overseas factories, like its past pledges regarding workers’ safety there, are bereft of public accountability; and that the majority of the 2005 to 2012 campaign cash donated by Wal-Mart or by the Walton family – which owns about half of the company – has gone to members of Congress with lifetime League of Conservation Voters scores of 30% or less. While Wal-Mart remains “unwilling to address or alter core parts of its business model,” Mitchell told reporters, it uses “sustainability” as “a growth strategy” in efforts to expand that model’s reach.

Environmentalists on the call urged that Wal-Mart reform its treatment of its employees as well as its impact on the climate. Their statements came hours into a strike by members of the union-backed non-union workers’ group OUR Walmart, who walked off the job at three stores in Chicago. That one-day walkout follows work stoppages yesterday in Washington State; last week in Southern California; and last month in Florida. Chicago striker Richard Wilson told Salon the strike “puts the issues that we face as associates right front and center,” including wages, healthcare, scheduling, and alleged retaliation against activists. According to the campaign, at least eighty workers joined the Hialeah, Florida strike; it said totals are not yet available for the subsequent strikes.

Wal-Mart did not immediately respond to an early morning Wednesday inquiry regarding its environmental record and labor standards. Asked Monday about OUR Walmart’s planned strikes and protests on “Black Friday,” Wal-Mart spokesperson Brooke Buchanan told Salon the company was “really focused on serving our customers, and giving our customers and our associates the best holiday ever.” She said the company had “a strict anti-retaliation policy.” Wal-Mart’s website touts “a productive year” on “global responsibility,” with accomplishments including “Renewable energy now provides 21% of Walmart’s electricity globally, and we became the largest onsite green power generator in the United States…”

Following a mid-2000’s wave of criticism from critics including green groups and union-backed campaigns, Wal-Mart has worked aggressively to improve its relationships with some environmental organizations.  The journalist Charles Fishman reported in an update to his book The Wal-Mart Effect that ex-President Bill Clinton privately advised then-CEO Lee Scott on how to mend fences with greens. The Environmental Defense Fund now maintains an office in Wal-Mart’s Bentonville, Arkansas hometown, where it says its staff “work to make America’s largest goods purchaser greener.” A tax disclosure for the period between February 2011 and January 2012 from the Walmart Foundation lists the Environmental Defense Fund among its grantees. The EDF did not immediately respond to a request for comment.

A spokesperson for the Natural Resources Defense Council, another leading environmental group, told Salon over e-mail that the organization "NRDC does not, and never has, taken a penny from Walmart. We have advised them, though, on sustainability practices over the years."

The Sierra Club’s Marx told Salon that Wal-Mart has “not made any efforts to outreach to us,” and that when his group has instigated conversations with the company on issues, “they have not really resulted in any progress at all.” Amanda Starbuck, who directs the Rainforest Action Network’s Energy & Finance Program, told Salon that the company had not reached out to her group, and would not pass its “very strict filter” for donations. “Wal-Mart is somewhat notorious amongst the environmental community,” added Starbuck. “It does regularly approach groups for partnerships, but always insists on a strict non-disclosure agreement, which really handicaps the ability to be open and transparent about the nature of relationships, and about Wal-Mart’s true progress to reaching its environmental goals.”