They were troubled teens, and I was a rookie teacher overwhelmed by grief, but we discovered how funny life can be 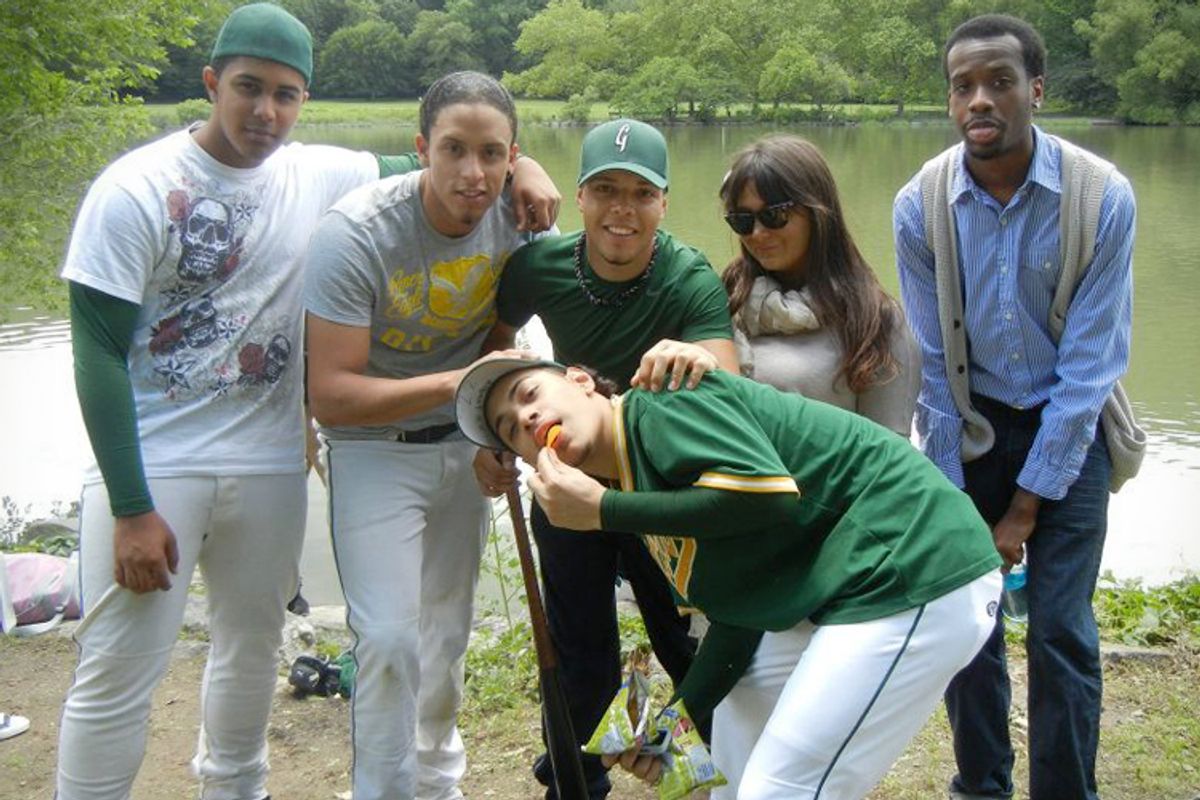 A photo of the author's students, from left to right: Adonys Contreras, Ricky Cabrera, Chris Cordero, Ashley Hoffman, Genile Thomas, and in the center, Albert Ovalles.
--

The message that my father’s throat cancer finally won came a week and a half before I started teaching. When he died, I dealt with the pain so well I could be a grief counselor. Instead of facing reality, I mastered all five stages of wandering around in a fog.

But teaching was a powerful diversion. At the high school where I worked (25 percent black, 75 percent Hispanic), the population had been held back twice in middle school. The system taught these kids one lesson: Classrooms were places to fail. And here I came, that great movie cliché: a 24-year-old rookie English teacher, overly enthusiastic and in every student’s face — a white girl commuting from the Upper East Side to a transfer school in Inwood to show them how life-changing comedy was. But they stuck it out. Life hadn’t always been a comedy. But in my class, they were hilarious.

In New York City public schools, the troubling aspect of a first period class is this: No matter when it starts, no one shows up. Attendance is weaker than the turnout for the Cha Cha slide at a ghost town block party. It’s a great time to schedule a course with an art credit.

So I chose to teach improv. For the unfamiliar, improv refers to a troupe of performers creating scenes on the spot without any planning. Many famous comedians got their start in improv, like Amy Poehler and Tina Fey, and in New York, the Upright Citizens Brigade is one of several groups that teach classes for adults. In college, I was so hooked I ditched bars and party hopping for improv festivals and sketch workshops. As a comedy nerd who geeked out on “Saturday Night Live” and “30 Rock,” every day for one 55-minute period, I would find solace in artistic ADD.

And my 18-year-olds weren’t just attending. They were present. Skydiving, launching food fights and falling all over each other as the three blind mice, they were kids playing, and the bell ringing couldn’t stop them. I encouraged them to be loud. To be free with themselves. I wanted to share with them what I had learned: You can go anywhere, be anything, and you’ll have backup.

The one who loved my class the most was Ricky, a Sylvester Stallone doppelgänger nicknamed Rambo. Despite different ZIP codes, Ricky and I were similar. We both boiled over with energy, attention-starved and eager to prove ourselves. And we were both fatherless. Except he didn’t know his father.

Some days, I’d warm up my classes with reverse “Snaps.” My improvisers gave each other compliments in the style of insults.

“Your mother’s so beautiful, she doesn’t even need makeup.”

Then they’d high-five and break into the Harlem Shake.

Ricky hated to warm up. He was already warm. He attacked the stage whether he was doing the military crawl or slipping into the role of the fairy godfather issuing a cotton-mouthed order to make the prince an offer he couldn’t refuse. In “Forward Reverse,” I’d manipulate scenes with a remote control, forcing Ricky to drop to the floor and spring back up repeatedly. Every time he fell on command, it was like the tiled classroom floor was a trampoline. Like me, he was a gamer.

I taught Ricky’s troupe a “form” called the Harold (a performance structure composed of three separate stories that inspired shows like “Curb Your Enthusiasm”). Like a Quentin Tarantino fever dream, each story line is completely different, but all plotlines need to come together in one satisfying ending.

For his first Harold, Ricky sprinted out to “Sabotage” by the Beastie Boys. At the precise moment his troupe miraculously folded three separate stories together — the slow-motion sumo wrestling match, the clumsy spy mission and the computer fix-it team — the story lines clicked into place so well that the finale looked scripted. Ricky and his friends were in awe of improv’s lesson: Everything is connected.

“She’s crying,” Jessica said of my reaction. They couldn't possibly have any more left in them after that, I thought.

But I asked, half in hope and half in disbelief, “Wanna go again?”

But then came showtime. Shows introduced fear of failure and its accompanying nightmares, which always go over so well with audiences. The kids could never seem to hold on to the confidence they had in rehearsal. And there I’d be, the perfect emcee -- clenching my fists and pacing back and forth. I was nervous, too.

Fun fact about high-schoolers from the hood; they sense two things right away: 1) fear and 2) insincerity. For the truly dreadful moments when my players froze up, they’d turn to look at me for guidance. I’d whisper words of support that said I-believe-in-you-don’t-worry-just-remember-this-is-the-most-important-moment-of-your-life-so-if-you-mess-up-it’s-over-forever.

Someone in the audience at our first performance heckled us, and then the show really unraveled. Ricky hid behind the Smart Board dragging his hands down his face.

My players huddled around me to plan a rebound, but Ricky signaled me to dismiss the audience early, and I relented. What had I done? I’d just let my students fail in front of a jury of their peers. But my beginners still craved more. We weren’t done yet.

So I made the ensemble do trust falls and human pyramids. I stuffed marshmallows in their mouths when they broke the cardinal sin of improv – denying, or refusing a reality set up by another player. I reminded them to give "gifts" (details to help out scene partners) and to avoid going “blue” – a comedy term for off-color humor. For the most part, they listened.

I showed Ricky how holding onto his motive in a scene was the way to break out of his head and stay true to the moment.

So when his character backed out of his own bachelor party, I was ecstatic.

“Come on, man, last night of freedom!” his friends ambushed him.

The class became a family. We cracked up together like one, and we took in more. Teachers sent me their kids who wouldn't pay attention. The behavior consultant announced she was shocked to observe the one kid who couldn’t sit anywhere excelling in my class. He wanted to meet to rehearse. Over the break? I couldn’t believe it.

Insulating myself against my father’s abrupt departure from my life, I became obsessed with directing improv. My ensemble's needs were strong pain suppressants, so I devoted all my energy to keeping comedy interesting. My father had always discouraged whining, and there wasn’t time to feel sorry for myself. Much more worrisome than distancing myself from my own grief was the fear that I would let my students down.  I staggered under the weight of this responsibility.  So for two years, I never once was absent.

My dizzying, intense loyalty to them reinforced standards of behavior that were important to me -- toughness and self-reliance -- so teaching became my only preoccupation. It was an exhausting time, but I didn’t stop to notice. I may have been collapsing every Friday night, but during the week, my onstage ego was killing it.

When my father was in high school, the New York Athletic Club named him the most outstanding athlete for Springboard Diving. In college, he earned NCAA championships and the nickname “Smooth” for his dives that landed assuredly in the water without a splash. Winning every lifeguard race for years, he ran Jones Beach. He tried pushing me to be an athlete, but eventually gave up, settling for a few climactic cartwheels in improv scenes.

Still, he would blow up photos of my minor accomplishments onto tri-fold boards and force weirded-out relatives to pose for awkward pictures next to them. He’d craft an annual narrative out of my published clips and email it to everyone he’d ever met. Now I was his reincarnate, overdoing the support with students who felt like my own kids.

I was desperate to fill the void in my students' lives with unconditional love. For every show, I’d plaster the halls in fliers and tag the sidewalk with chalk. My troupes paraded the halls with custom jerseys I ordered for them out of pocket. My father was gone, but in championing my improv teams, this was the closest I’d ever been to him.

Ricky wasn’t always game to perform. Sometimes he couldn’t leave problems at home. On off-days, I wanted improv more for him than he did for himself.

“I want to see stuff happening,” I’d demand, way too loud for being so close. “Don’t talk about getting a divorce, chainsaw all the furniture in half.”

Ricky was going through things, and he couldn’t turn it off. He knew when he needed to slow down. He didn’t have my laser-focused determination to impress everyone constantly so I didn’t always understand.

The day before the final show, morale was low. I expressed true disappointment for the first time, the way my father had with me when I stopped lifeguarding. Ricky said, “Don’t worry, Ashley, I got this right now.”

Improv is rarely amazing, rarely terrible – usually somewhere in between. But despite their anxieties, the performance the next day was explosive. When we all went hands-in for our chant, I told everyone to convert nervous energy to fuel. Ricky told his teammates, “Leave it all on the stage.”

They charged into the room, drunk with power supplied by me, the teacher who not only enabled their hyperactivity, but cherished it.

Ricky led the troupe to great effect. The students enthralled everyone with their intensity, and an electric current ran throughout the room. Steady choruses of laughter erupted throughout the whole show. A colleague said it was the most amazing thing he’d ever seen.

I was so proud, I reacted the only way I knew how: by taking pictures and making too many posters to show off.

Ashley Hoffman has written for the New York Times, New York magazine and Cosmopolitan. She's thankful for everything improv comedy taught her.