SpongeBob SquarePants is a Marxist!

Right-wing media outlets think the show is anti-welfare. But a close watching reveals it's totally pro-labor 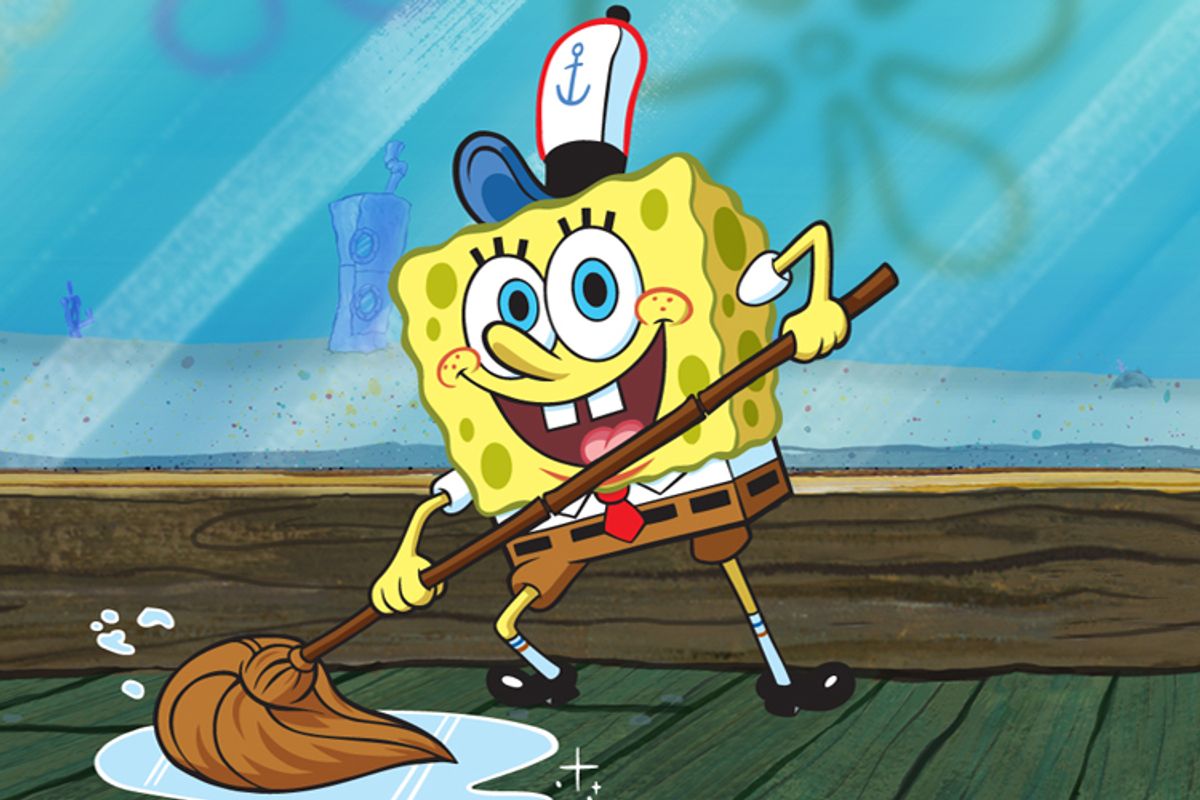 SpongeBob SquarePants was once loathed by conservatives because he supposedly promoted the "homosexual agenda" and warned children about the dangers of global warming. But now he is one of the few Hollywood types conservatives can stand.

The Hollywood Reporter summarizes a "SpongeBob" episode that aired on Monday and has conservatives cheering:

One day [after being fired], SpongeBob is already a disheveled, wrinkled, unshaven beggar, and his friend Patrick is determined to show him the ways of "glorious unemployment," which includes free stuff and lots of spare time.

"Being unemployed is the best gig I know," Patrick tells SpongeBob. But at a no-charge, all-you-can eat meal, SpongeBob has an epiphany: "Unemployment may be fun for you, but I need to get a job," he tells Patrick. At that moment, he's instantly transformed into a sparkly clean, enthusiastic and energetic sponge again.

Fox News, Breitbart, the Washington Times and the New York Post see this as a denunciation of the welfare state;  Andrea Morabito writes in the Post, “Lest he sit around idly, mooching off the social services of Bikini Bottom, a depressed SpongeBob sets out to return to gainful employment wherever he can find it.” Fox News et al. based their analysis on this short clip, but if you watch the full episode (available on Amazon), a different story emerges.

SpongeBob arrives at work one day to discover he’s been fired from the Krusty Krab so that Mr. Krabs can save a nickel. “I love you like a son,” Mr. Krabs tells SpongeBob, “but you can’t argue with a nickel.” After being fired, SpongeBob does meet Patrick for “funemployment,” but the two don’t lounge on government benefits. First they anger Squidward who throws food at them -- their breakfast. Then they participate in an experiment for Sandy that involves eating toxic (but free!) food. SpongeBob decides he needs a job, but, much like the long-term unemployed, finds his skills are no longer in demand. He tries to find employment at the Weenie Hut, the Pizza Piehole, the Taco Sombrero and the Wet Noodle, but he can only make patties. After being fired from each establishment he returns home dejected only to find he has no “Snailpo” to feed Gary. He cooks his own dinner, which both Gary and Patrick devour. Having realized that he should never have passed up SpongeBob, the owner of the Weenie Hut kidnaps him and forces him to work. Then the owners of the other restaurants fight to force SpongeBob to work for them. Finally Squidward begs SpongeBob to return because Mr. Krabs is a dreadful cook. SpongeBob rejoins the Krusty Krab and Mr. Krabs earns his nickel by installing a pay toilet.

The full episode has a different moral than conservatives imply. The fact that Mr. Krabs fires SpongeBob to make a nickel hardly constitutes a resounding endorsement of capitalism and the ethics of businessmen. And SpongeBob’s dilemma is reminiscent of the days before unemployment insurance, food stamps and welfare, when the unemployed had to depend on the unreliable compassion of strangers. Similarly, his struggle to find gainful unemployment is exacerbated by his unique skill set, which doesn’t translate easily to other jobs, emphasizing the importance of worker retraining. His kidnapping by the Weenie Hut warns viewers of the often exploitative nature of fast food companies. Given that the episode was released during the retail and fast food strikes, it could easily be interpreted as a sign of solidarity with the underpaid, overworked and insecure minimum-wage workers in the fast food industry.

How did conservative viewers get it so wrong? They have watched only one short clip of SpongeBob SquarePants. I’ve watched every episode numerous times, and have come to the opposite conclusion: SpongeBob is a Marxist. Here’s the evidence:

While classical and Austrian economists view the capitalist system as inherently competitive, Marx saw it as entirely uncompetitive. Bikini Bottom clearly resembles the latter. Competition doesn’t lead to innovation; there is no creative destruction, rather there is one monopoly firm (the Krusty Krab) and another firm (the Chum Bucket), constantly trying to siphon customers, not with a better product but by theft and through political manipulation. SpongeBob shows the capitalist mode of production, with its fealty to “competition,” to be entirely farcical. In Marxist economics, competition eventually leads to one monopolistic firm that exploits workers and customers. Sound familiar?

Speaking of exploitation, in SpongeBob’s world, production follows the labor theory of value that Marx predicts, rather than the marginal theory of value predicted by Austrian economists. SpongeBob is the greatest fry cook in the universe, yet he is paid almost nothing! The marginal theory of value predicts that a worker will be paid according to the value they add to the good. But SpongeBob, who can cook like a god, is paid less than minimum wage. His only attempt to obtain a raise ends in failure. This is what Marx’s labor theory of value predicts: Workers will be squeezed, they will never reap the full value of their contribution to the final product. Since the capitalist and the landlord input nothing, all their profits must come at the expense of the worker, and further, the more product the worker produces, the less value he has. Mr. Krabs definitely has enough money to pay SpongeBob more --  he’s a millionaire who at one point buys a massive hotel -- yet he refuses to properly compensate his workers and regularly runs afoul of labor standards, like the 1920s robber barons and today’s megacorporations.

SpongeBob seems to inhabit an Oscar Wildean post-capitalist utopia. SpongeBob exemplifies  the “Soul of Man Under Socialism”: He loves his job and prefers cooperation to competition. He eschews a life of labor for a life of art, his “job” isn’t drudgery, but rather brings him joy. Rather than continuing to accumulate “long after he has got far more than he wants, or can use, or enjoy,” SpongeBob takes a job he loves and pursues a life of friendship, cooperation and love. This manifests itself in SpongeBob’s uncanny knack for art, which is juxtaposed with Squidward’s inability to produce art, presumably because his job is so draining.  In contrast to SpongeBob, Mr. Krabs is devoted entirely to the acquisition of money, to the point that he is willing to sacrifice his life and the lives of his customers for a cent.

SpongeBob is Ralph Nader, Naomi Klein and Eugene Debs rolled into one. In one episode, SpongeBob laments that corporate control of the Krusty Krab has led to a decline in the quality of service because the patties are made by machine, leading SpongeBob to wonder, “Where’s the love?”In another, SpongeBob protests a superhighway that will destroy jellyfish fields. The episode critiques the way corporations manipulate the political process (the plans are made in secret by Plankton to destroy the Krusty Krab), voter apathy (citizens were entirely unaware of the implications of the project, even Mr. Krabs votes aye) and the role of police in squashing dissidence (the police arrest SpongeBob numerous times on false pretenses when he tries to protest). SpongeBob makes a quixotic stand against corporate power: “Well all I have to say is that um, well, STOP THE MADNESS! We need to get Jellyfish Fields back to the jellyfish, which will restore their natural habitat so they will be in peace. So what do you say everybody, will you help me?” The crowd initially hesitates, then joins SpongeBob to prevent a tractor from destroying Jellyfish Fields. SpongeBob also dabbles in organized labor, joining Squidward on strike. The strike is largely ignored when Mr. Krabs brings in scabs, leading Squidward to note, “Nobody gives a care about the fate of labor as long as they can get their instant gratification.”

Nor is the show's treatment of labor issues its only progressive element. SpongeBob’s inability to drive means he protects the environment by walking to work. Sandy Cheeks doesn’t stay home and cook for the kids, she defies gender stereotypes by being really, really good at science (she came to Bikini Bottom to study sea life). Patrick, by far the poorest member of Bikini Bottom, lives securely, yet has never been incredibly successful at holding a job. Conservatives should think twice before they make a kindhearted hippie-sponge their hero. Bikini Bottom is a liberal utopia where public transportation is the norm, women are free of ugly stereotypes and society adheres to the motto “from each according to his abilities, to each according to his needs.”