The former boxer served time for rape, but now America has forgiven him -- only to treat him as a figure of fun 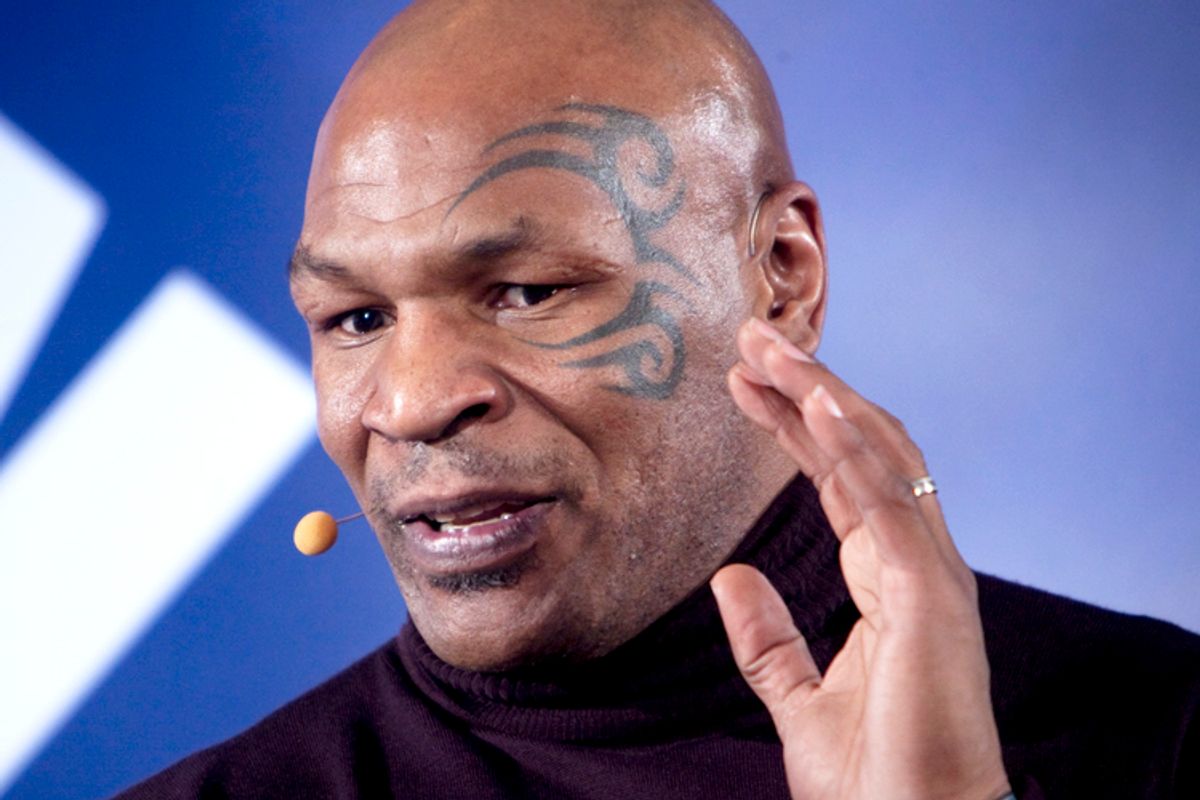 That much is clear from his new memoir, "Undisputed Truth," co-written with Larry Sloman. The former champion boxer has carved out a second career as a public figure and media personality, performing in "The Hangover" movie franchise and in a one-man show on Broadway -- one that's been adapted by Spike Lee into an HBO special that will air this weekend. Also this year, Tyson has appeared at the Tony Awards, on "Law & Order: Special Victims Unit," and in a "Scary Movie" sequel; it's all just meant to pay the bills. "I had been broke for ten years," Tyson (or Sloman as Tyson) writes. "I had a family to feed and support. I'm not going to get rich from doing special-guest appearances on TV shows." His appearances tend to play off his pugilism and personal drama (Tyson is not in danger of winning an Oscar for inhabiting a role different from himself) and Tyson's audience inhabits an uneasy gulf between laughing with or at him. It's not clear whether Tyson is in on the joke -- he just wants to keep working and to hear the laughter. "I hate what acting makes me do," Tyson writes, "but I love how it makes me feel."

His memoir frames working in the media as a gig for Tyson; it's not exactly an animated passion or something he thinks he's great at, but he knows people are entertained by him, he has people to support and appetites to feed, and so it goes. The book delves into greater detail about how, if it hasn't exactly destroyed him, fame certainly hasn't been a net good for Tyson, a person whose upbringing in poverty and around gangs (as detailed in an excerpt in New York magazine) set the template for a chaotic, substance-abusing life. With admirable openness and specificity, the novel moves point-to-point through a life in the public eye; every problem is exacerbated by the public's attention. He's able to make people laugh by sending up his image in "The Hangover" precisely because that image is of someone so unacquainted with social norms as to bite off his opponent's ear in a boxing match.

The memoir's title, "Undisputed Truth," is deeply troubling in at least two particulars: Tyson's depiction of himself as innocent of the rape for which he served three years in prison, and his portrayal of ex-wife Robin Givens (who has alleged spousal abuse) as a fame-hungry liar whose attempts to convey her story in the media are entirely self-serving. Many people would dispute Tyson's framing of the truth. In any event, it's clear that Tyson's relationship to his own fame is complicated in a manner that he's eager to hash out in writing, even as his fans only hope to laugh at him.

This gets to the paradox of Tyson: His continued travails in the public eye have only fueled the peculiar voltage that makes him among America's most enduring celebrities. Unlike, say, Charlie Sheen, who's largely faded from view after a turbulent period, Tyson remains current, somehow. He exists at the intersection of two leitmotifs in American life. One is the love for a Horatio Alger up-from-poverty story, particularly one focused on a black person's elevation through exceptional athletic ability and especially one whose telling elides anything that's less-than-rosy. The other is the desire for a clown to laugh at in a way that's racialized when it's not outright racist. It was fulfillingly scandalous to gawk at the Holyfield incident or the Givens case then; now it's as though white people have forgiven Tyson so they can have fun with him.

Years after his fame in the boxing ring, he's able to draw fans to, say, the New York Public Library, where a conversation with Paul Holdengräber, director of the "LIVE from the NYPL" series, drew a standing-room-only crowd. "It's a public library, and we are capacious," Holdengräber said, almost apologetically comparing Tyson to other authors speaking at the library like Toni Morrison and Junot Díaz. But the crowd wasn't preoccupied with artistic distinctions. In the early going, Mike Tyson described getting his distinctive face tattoo, beginning: "I was high." He didn't seem to mean it as a joke, but the laughter was uproarious.

A public figure, one whose memoir deals at great length with his struggles with addiction in a plain-spoken manner, relating the process by which he received a tattoo covering much of his face while under the influence isn't necessarily the stuff of high comedy -- there was a huge gap between what was being said and what was being heard. Tyson seemed to realize what was expected of him, and related the story in a more and more explicitly comic fashion, saying that he'd originally wanted a face tattoo composed of little hearts. The audience roared. Later on, the audience laughed, again, at Tyson's initially grave admission he'd relapsed from sobriety after the timeline conveyed in the memoir (which goes up until Tyson's recommitment to sobriety this summer). "Relapse is a part of recovery," joked Tyson, "and if you don't relapse, you don't recover!" The crowd went wild.

Tyson has attempted to deliver an honest accounting of his life in "Undisputed Truth," albeit one filtered through a co-writer; that story is one of a person with, in contemporary parlance, low self-esteem. Describing the press's wild revulsion after Tyson bit off Evander Holyfield's ear, Tyson writes: "I didn't care about any of that. I already felt that things were stacked against me anyway." And that attempt is met with laughing that's not mockery, exactly, but is uncomfortably quick to declare Mike Tyson a safe, cuddly figure. See you at the Tonys, Iron Mike!

The redemption arc imposed upon Tyson is a classic narrative, and one Tyson even tried to play into in spite of how un-uplifting, how specific about race and class in America, his book is. Asked what frame of mind the book's troubling conclusion ("I'm a waste ... I'm the quintessential addict") depicts, Tyson said at the New York Public Library, "That's when I'm trying to scare my wife into giving me a hug." It was very heartwarming and entirely unconvincing.

I have no interest in relitigating Tyson's rape conviction or the war of words between him and Givens. But there's something deeply strange about the embrace the media and his audience have given Tyson, shouting over his attempts to explain himself. "Great boxer becomes 'Hangover' actor and defeats demons" sure beats "Brooklyn kid has been hobbled for life by systemic biases against people like him in American life." But who can blame Tyson for the way he's framed by others? After having spent the first half of his media career as a villain, is it so surprising that, given the opportunity to speak in front of people and be treated lovingly by the media and to get a laugh, Tyson takes it? "I honestly don't believe anyone would read this book and say, 'Wow, I'm envious of this guy's life,'" Tyson said at the library. That's as true of his upbringing as it is of what he represents in America today.