Is this the new David Duke?

Matthew Heimbach, 22, is one of the white nationalist movement's youngest leaders -- and his star is on the rise 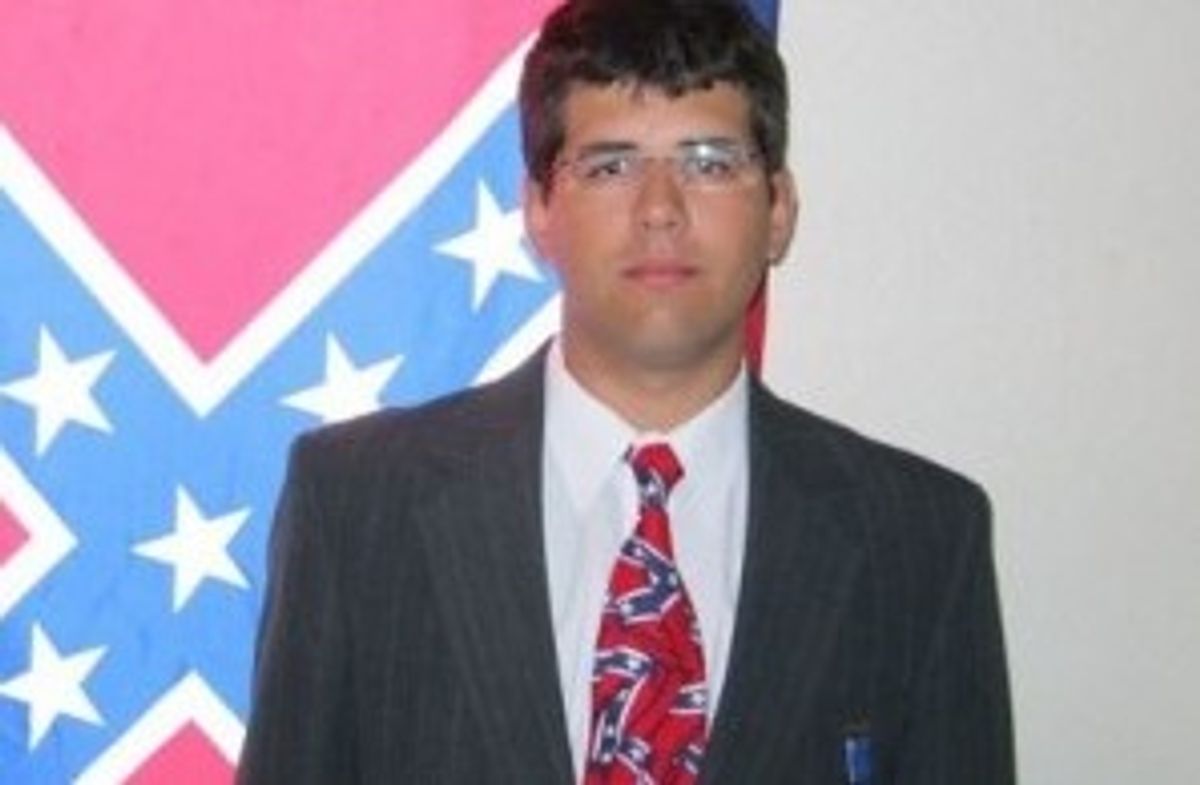 At 22, Matthew Heimbach is a rising white nationalist star, just as eager to get into bed with graying Southern secessionists as he is with steel-toe-boot-wearing neo-Nazis.

Over the past few months, he has rallied with the Knights of the Ku Klux Klan at the invitation of Thom Robb, a Christian Identity pastor who leads the group and for whom Heimbach claims to have “great respect.” He has stood side by side with the Aryan Terror Brigade, and he plans to attend a rally this weekend with the neo-Nazi National Socialist Movement (NSM) in Kansas City on the 75th anniversary of Kristallnacht, the Nazi pogrom that left more than 90 Jews dead and some 30,000 imprisoned in concentration camps.

It has been a meteoric rise for someone so young, the likes of which have not really been seen since the anti-Semite David Duke appeared on the campus of Louisiana State University in Baton Rouge, dressed as a neo-Nazi and railing against the “Zionist Occupied Government.”

In fact, Heimbach’s profile on the radical right has risen so quickly that rumors have spread across online forums that he is privately working as a federal informant, or even as an agent of Mossad, the Israeli intelligence agency. None of that is true, Heimbach says with a wry grin. But what he is more than willing to admit is that in the years since forming the controversial White Student Union at Towson University in Maryland, where he graduated this year with a degree in history, he been thoroughly radicalized.

“I tried to be a kosher conservative. I really, really did. I gave it my all to try and just be a conservative and try and work within these parameters. But I couldn’t do it,” Heimbach told Hatewatch during a nearly four-hour interview earlier this week not far from the small town of Paoli, Ind., where he and fellow white nationalist Matthew Parrott run the Traditionalist Youth Network (TYN).

Over the course of a cordial dinner interview, Heimbach discussed all manner of things: the birth of his racist views, his plans for TYN (he claims the group has seven “shadow” chapters at universities around the country), his support of Southern nationalism and his recent ouster from the neo-Confederate League of the South (LOS.) But perhaps most surprisingly, he condemned the white nationalist wing of the radical right as a movement filled with cowardice most apparent in those unwilling to stand on the strength of their convictions.

“Our target audience are [sic] largely cowards,” Parrott said of the young students he and Heimbach are trying to recruit. Heimbach agreed. “It’s cowardice,” Heimbach said. “The American dream of my parents’ generation just isn’t there for people of my generation. So to a certain extent, the biggest reason people say they don’t want to get into the movement is because how it will hurt my career. You don’t have a career anyway!”

That same charge of cowardice cannot be leveled against Heimbach. For his part, he seems willing to join anyone – from Jared Taylor, who founded American Renaissance, to Duke himself, to neo-Nazis and Klansmen (which he calls “good, Christian family men). “I’m tired of throwing comrades under the bus. And I see that’s what our movement does all the time,” Heimbach said. “If someone crosses an artificial line, you just start throwing people under the bus.”

According to Heimbach, that’s exactly what LOS President Michael Hill, an academic who has suffered the professional consequences of his own Southern nationalist views, did when he kicked Heimbach out of the group last month.

In a Facebook posting last month, Hill wrote: “Matthew Heimbach, a former member of The League of the South, has apparently decided to cast his lot with Nazis and others who do not represent the traditional South, the Southern Nationalist movement, and The League of the South. … Neither he nor his friends will be welcome at our demonstrations.”

Heimbach laughed when asked about that ouster and said it was simply Hill having a “temper tantrum.” The League would welcome him back, he claimed, especially as its base becomes increasingly populated with the more militant new guard.

“That form of Southern nationalism from a generation ago is a teenager who wants to get in their dad’s face. But when their dad gets out of his chair and reaches for his belt, he goes running into his room,” Heimbach said with a chortle. “It’s ridiculous. It’s reactionary.”

Of course, Hill isn’t the only one who has expressed concerns about the ratcheting up of Heimbach’s rhetoric and activism. Parrott, who runs TYN with Heimbach, privately told Hatewatch that Heimbach’s ambition had not been without consequence. “He rose so fast; he didn’t kiss all the rings,” Parrott said. “I’ve run around and apologized to a lot of people – running interference for him.”

Is it unchecked ego behind Heimbach’s rise? Bald ambition? The ignorance of youth?  It’s hard to say. But from the time he was 17 and picked up a copy of Pat Buchanan’s Death of the West, a white nationalist tract published in 2002 that cites a bevy of racist literature, there has been no slowing Heimbach. Increasingly, he has even melded his racist views with the convictions of his spiritual beliefs, which are just as radical as his views on race.

A lapsed Catholic, he has adopted Orthodox Christianity as a justification for much of what he believes. His version includes not just the separation of the races, but also spiritual warfare and the fear that demons walk among us. “I believe in angels and demons and magic,” Heimbach said with no hint of irony. “On Halloween, I batten down the hatches and go to church and say my rosary all day.”