An aging Roman journalist faces the wreckage of a gorgeous, wasted life in Paolo Sorrentino's "The Great Beauty" 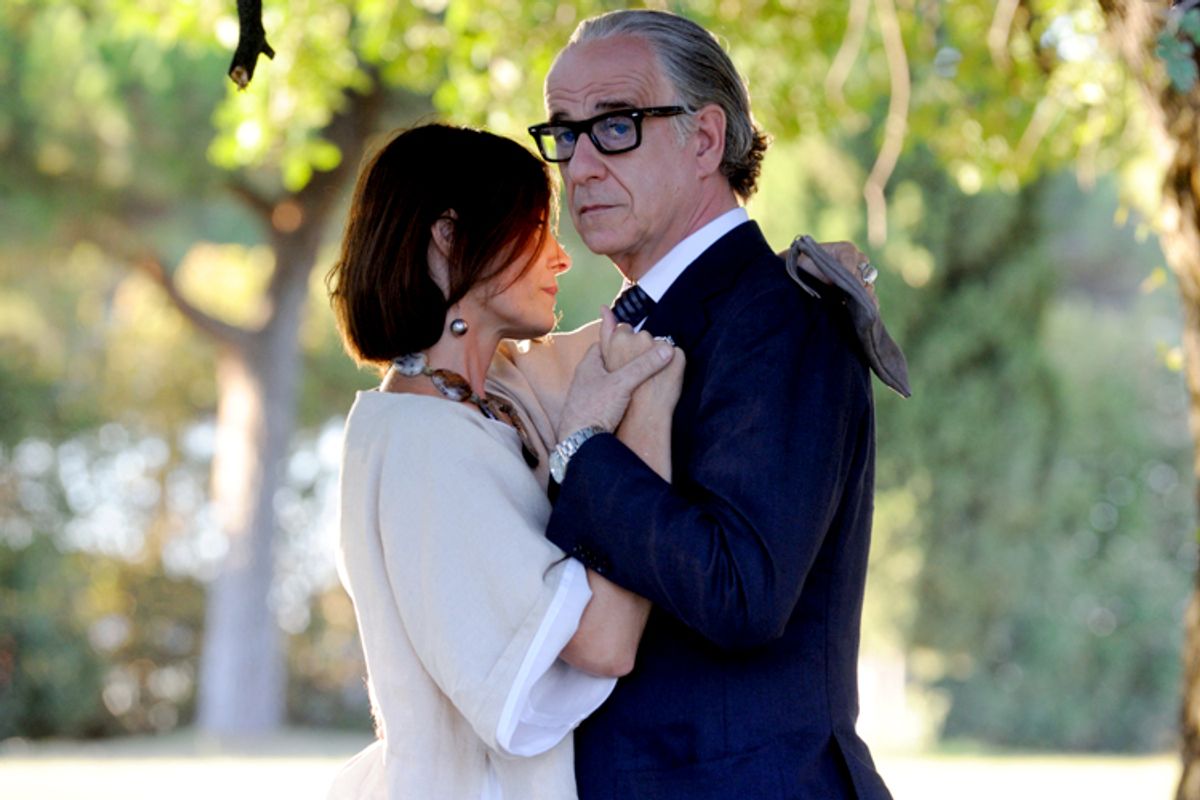 Jep Gambardella, the aging Roman journalist played by the great Toni Servillo in Italian director Paolo Sorrentino’s tour de force “The Great Beauty,” tells us that when he was young his friends always had the same answer to the big question: “pussy.” His answer was different: “The smell of old people’s houses.” The question was, “What do you value most in life?” and through his answer Jep learned that he was “born to sensibility,” born to be a writer. Jep seems not to notice that he’s telling us this story through the delirious haze of a hedonistic rooftop party, attended by the cream of Roman society, where the vibe feels much closer to the first answer than the second.

Never have cynicism and disillusion seemed more intoxicating than in “The Great Beauty,” which is such an overwhelming visual and auditory experience that its elements of cautionary moral fable threaten to get lost amid the gorgeousness. Not that I’m complaining. Although he remains almost unknown in the United States, Sorrentino is one of contemporary Europe’s most important filmmakers, and consistently seeks to push the traditions of classic art cinema toward a framing, a pace and a sensibility that can capture 21st-century viewers. (I’m not going to get into the question of Sorrentino’s exceedingly strange English-language film, “This Must Be the Place,” with Sean Penn as a Nazi-hunting rock star apparently modeled on Robert Smith of the Cure. I think there’s a rule, or there should be, that European directors always get to take a mulligan the first time they make a movie in America.) Drawing at once on music video, reality TV, art history, Proust’s “Remembrance of Things Past” and Fellini’s “La Dolce Vita,” “The Great Beauty” is an ironic and passionate near-masterwork, like a nine-course dessert that makes you entirely forget the meal. It was just nominated for five European Film Awards, including best picture, best actor, best director and best screenplay.

Jep is a 65-year-old celebrity journalist, a veteran fashion plate and ladykiller, who wrote an ambitious first novel 40 years ago and has spent his evenings since then at nightclubs, art galleries, theaters, readings and too many all-night parties to count. He didn’t just want to become part of Roman society, he recounts, he wanted to be its king; he didn’t want to be invited to the best parties, he wanted the power to ruin them. Now, speaking as a trade professional, even in the alternate cultural universe of Europe the source of Jep’s wealth and leisure is mysterious; if he’s supposed to have sold his soul for a breathtaking penthouse apartment overlooking the Colosseum, an impeccably tailored designer wardrobe and a rotating cast of lovers, I can provide the devil with a long list of people who’d take that deal.

I guess that’s the point: Jep’s had a life many other people would kill for, yet he’s burned out on it entirely, and long ago lost track of the distinction between pleasure and boredom. When he eviscerates a longtime female friend at a party for her high-minded morality and pretentiousness, she accuses him of misogyny. You’re not the center of the world, he sneers at her; I’m a misanthrope, not a misogynist. (A comment Sorrentino may have drawn from English filmmaker Peter Greenaway.) But before he tears her apart, Jep tries to soften the blow, telling her that he knows what she’s going through and he himself is no better: “We’re all on the brink of despair. All we can do is look each other in the face, keep each other company, joke a little. Don’t you agree?”

If “The Great Beauty” feels in many ways like an elegy for a particular generation of Italian intellectuals of the ‘60s and ‘70s, who have lived through the decline of the Roman Catholic Church and the Communist Party, two defining institutions of Italian life, it’s important to understand that Sorrentino (who’s in his early 40s) and even Servillo (who is a full decade younger than his character) don’t quite belong to that generation themselves. If there’s an autobiographical aspect to this film, it’s cultural rather than personal. Jep is poised between the impossible riches of the Roman past and an uncertain global future, just as his whole country is. Two people younger than he is die during the movie, and while Jep assures everyone that his performance of grief at funerals is just a performance, he fails to obey his own rule about not crying.

There is tremendous human comedy and an overload of sensual riches in “The Great Beauty” – including a mesmerizing, modernist musical score featuring Arvo Pärt, Henryk Górecki, Zbigniew Preisner and others, along with disco, mariachi, the Eurythmics and even Italian music – but the story free-associates from episode to episode, moving toward something that might even be called Jep’s spiritual rebirth, a phrase that would surely make him wince. This is a movie that reveals new levels of discovery and emotional narrative with repeat viewings, but the first time through the ride is worth it on its own terms. Late in the film, an ancient and grotesque Catholic nun – a Mother Teresa type who is supposedly 104 years old, helps the poor and sick 22 hours a day and subsists on 40 grams of plant roots – asks Jep why he never wrote a second novel. “I was looking for the great beauty,” he tells her -- la grande bellezza -- “and I never found it.” Like most of us, he was looking in the wrong place.

“The Great Beauty” is now playing at Lincoln Plaza Cinemas in New York, and opens Nov. 22 in Los Angeles, with a national rollout to follow.