Which skyscraper is tallest? It's complicated

For more than a century cities have fought to claim the most impressive tower. But height isn't everything 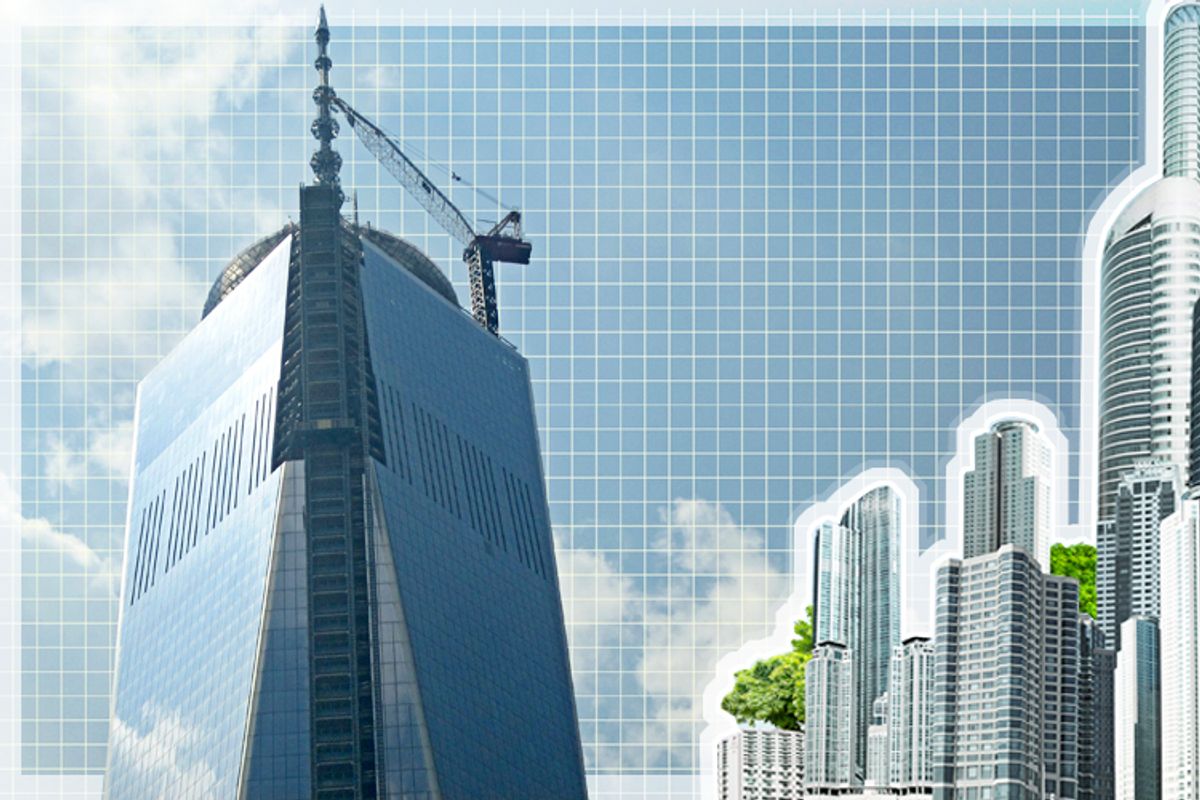 Chicago is a vertical city. It was in Chicago that the Home Insurance Building, commonly considered the world’s first skyscraper, was built in 1884. Among American cities with populations over 500,000, Chicago counts by far the most tall buildings per capita — one 30-story building for every 8,000 residents. For a quarter-century, ending in 1998, Chicago’s Willis Tower (née Sears) was the tallest building in the world; for 40 years, ending this week, it was the tallest building in the Western Hemisphere.

On Tuesday, the Willis Tower ceded that crown to New York City’s long-awaited One World Trade Center. Skyline-watchers in both cities have expected this transfer for years; One World Trade was loudly designed to top out at a symbolic 1,776 feet, dozens of stories above the summit of the Willis Tower. And yet there had been some fear in New York, and some hope in Chicago, that 1WTC might fall short on a technicality. All hinged on the classification of One World Trade’s needlelike roof projection, whose 408 feet account for 23 percent of the building’s height. Is it an antenna or something more?

For the answer, the world turned to the Council on Tall Buildings and Urban Habitat, an obscure organization with one contentious responsibility: measuring skyscrapers.

Last year, in an effort to reduce future maintenance expenses, the developer of 1WTC decided to amend the blueprints, halfway through construction, and strip the building’s spire of its fiberglass cladding. The sheathed mast, or radome, was evidently part of the building’s structure, whereas a spire of unadorned steel could be considered a structural accessory whose height would not count toward the architectural total. The claims to 1,776 feet were thrown into doubt. Without spire, 1WTC is only the third-tallest building in the United States.

At the time, the Council on Tall Buildings sounded the alarm. “Our criteria are very specific,” said Kevin Brass, the council’s public affairs manager. “We include spires but not antennas. If this is an antenna, it won’t be part of the height measurement.” Skidmore, Owings and Merrill, the architects of 1WTC, had long referred to the needle as a mast or a spire, but following the design changes, principal architect David Childs derided the new top as “an exposed antenna.”

In the end, the fracas proved unimportant: the council voted unanimously to crown 1WTC America’s tallest building, convinced that the mast remains a critical element of the building’s design. Chicago Mayor Rahm Emanuel was displeased. “If it looks like an antenna, acts like an antenna, then guess what? It is an antenna,” he said.

Emanuel has a point: Unless you clamber up 40 stories of steel into the sky, you will be farther from the ground on the roof of the Willis Tower, or on its observation deck, than at its Manhattan counterpart. And neither of these buildings has the highest public observation deck in the Western Hemisphere, a distinction that goes to Toronto’s CN Tower, whose SkyPod is 1,467 feet above the ground.

Confused? Welcome to the world of competitive structure measurement, a contest as old as the city and getting busier every day.

While this sudden hemispheric shift does speak to changes in the global power structure, skyscrapers are not financial tea leaves. Their prevailing logic is much simpler, and in a world where so many mysteries about cities can be explained by economics, refreshingly unpredictable. Analyzing the towers of New York City, Jason Barr, America’s foremost skyscraper economist, found that “the quest for status increased building height by about 15 floors above the non-status profit maximizing height.” A savvy developer will build tall, but it takes a different priority to build tallest.

For much of the 20th century, the world saw the skyscraper as the icon of profit-hungry American capitalism. The disparaging Soviet Encyclopedia, for example, defined the skyscraper (neboskrëb) in 1954 as a building whose existence could be explained by greedy American tycoons milking the land for all its worth. Status does sell — companies derive untold benefits from monumental branding, and at the Empire State Building, the profits of the observation deck dwarf those of the office space — but excessive height undercuts a building’s financial stability.

Technological challenges subvert the economies of scale. As a building grows higher, elevator shafts, ventilation devices and load-bearing supports cut into the percentage of usable space. Elevator traffic, water distribution, fire response and wind resistance provide further stumbling blocks. Every super-tall building (defined by the CTBUH as over 300 meters) devises new techniques that shift the financial calculus in its favor: Hong Kong’s International Commerce Center (globally No. 6) has double-decker elevators that stop at two floors at once, Dubai’s Burj Khalifa (No. 1) set records by pumping concrete almost 2,000 vertical feet, and the Chinese project Sky City (future No. 1?) will test the limits of modular construction. But it is the pursuit of glory more than profit that propels buildings toward the stratosphere.

This spirit of monumental rivalry long predates skyscrapers. Ever since the failure of the great collaborative effort at Babel, human societies have been in friendly structural competition. No sooner had resource collection allowed non-essential work than primitive societies built useless monuments; Rome’s largest apartment house (thought to have been between eight and 12 stories) was a noted tourist attraction. By the Renaissance, an inter-city rivalry of churches and clock towers was well established in Europe and would continue until 1889, when the Eiffel Tower framed the debate in new terms. In the most recent century, according to Barr, there’s evidence that skyscraper construction patterns in New York and Chicago were interrelated.

Within cities, rival builders kept tricks up their sleeves: In 1929, with a redesigned 40 Wall Street set to be the world’s tallest building, Chrysler Building architect William Van Alen secretly constructed a 125-foot spire inside the upper floors of the famous Art Deco skyscraper. When workers assembled the spire above Midtown Manhattan, the Chrysler vaulted over its 927-foot rival to become the world’s tallest building.

Thanks to that spire, the Chrysler was also the world’s tallest structure, barely eclipsing the Eiffel Tower. For years, the two titles had been synonymous, because the world’s tallest building was inevitably a church (in the late 19th century, the cathedrals of Strasbourg, Hamburg, Rouen and Cologne held the honor in succession). But when the 555-foot Washington Monument was completed in 1884, followed by the 984-foot Eiffel Tower in 1889, the pinnacle of human structural achievement was split into two categories. Long before the Council on Tall Buildings and Urban Habitat took the responsibility upon itself, the world had come to an agreement that buildings and structures ought to be held to different standards. With little fanfare, the Empire State Building’s height was surpassed by semi-anonymous radio masts in Poland and North Dakota. Toronto’s CN Tower is the world’s second-tallest structure — but you won’t hear its name thrown around with 1WTC, Taipei 101 and the Burj Khalifa.

The reason for this is obvious: It's relatively easy to raise a radio mast, somewhat harder to build a largely uninhabitable tower like the Tokyo Skytree, and extremely complex (and expensive) to construct a fully functioning mega-skyscraper. But the lines do blur. The Chrysler got a taste of its own medicine in 1957, when the Eiffel Tower added a 75-foot radio antenna to its summit, pushing past the Art Deco landmark in the overall global rankings. And this week wasn’t the first time Chicago was thwarted by a spire. When the CTBUH judged that the César Pelli-designed Petronas Towers (and their decorative but structurally integrated spires) had topped the Willis Tower, CTBUH founder Lynn Beedle received letters of protest, including one from an area third-grader who wrote: “You can’t just take the title of ‘world’s tallest building’ away from the Sears Tower and give it to the Petronas Towers. It will upset the whole country …”

Nevertheless, in the tradition of William Van Alen, architects continue to find ways to add height on the cheap. Vanity height, the distance between a building’s highest habitable floor and its architectural top (often measured in proportion to the building’s total height), is on the rise, according to a report that CTBUH released earlier this year. The Chrysler Building’s “vanity height” is 21 percent, a record for a super-tall building until I.M. Pei’s Bank of China Tower (22 percent) was completed in 1990. Since then, more than two dozen super-tall buildings have been constructed with vanity heights over 20 percent. One World Trade has more than one-fifth its height in its spire, and comparing it to the bygone North Tower (whose antenna did not count toward architectural height), it is hard to see what the difference is.

The Burj Khalifa, nearly twice the size of the twin towers, is the first skyscraper since the Empire State to be both the world’s tallest building and tallest structure. It’s also an excellent example of the above trend: The uninhabitable top, whose 800 vertical feet make up 29 percent of the building’s height, would alone have been the tallest building in the world until 1930 – or as the report puts it, the 11th-highest building in Europe today.

The current limit on vanity height for qualification as a skyscraper, set by the Chicago-based Council, is 50 percent. The closest offender is Dubai’s sail-shaped Burj Al Arab, whose height is nearly two-fifths sculptural. But as future skyscrapers vie to surpass the Burj Khalifa, vanity heights will continue to increase. And why not? Future skyscraper designs may include open space, farmland, wind turbines, parks and more.

Fifty percent would have been a meaningless marker for the megastructures of the pre-industrial era, and it will be an arbitrary one for the skyscrapers of the future.