Why we love androids on TV 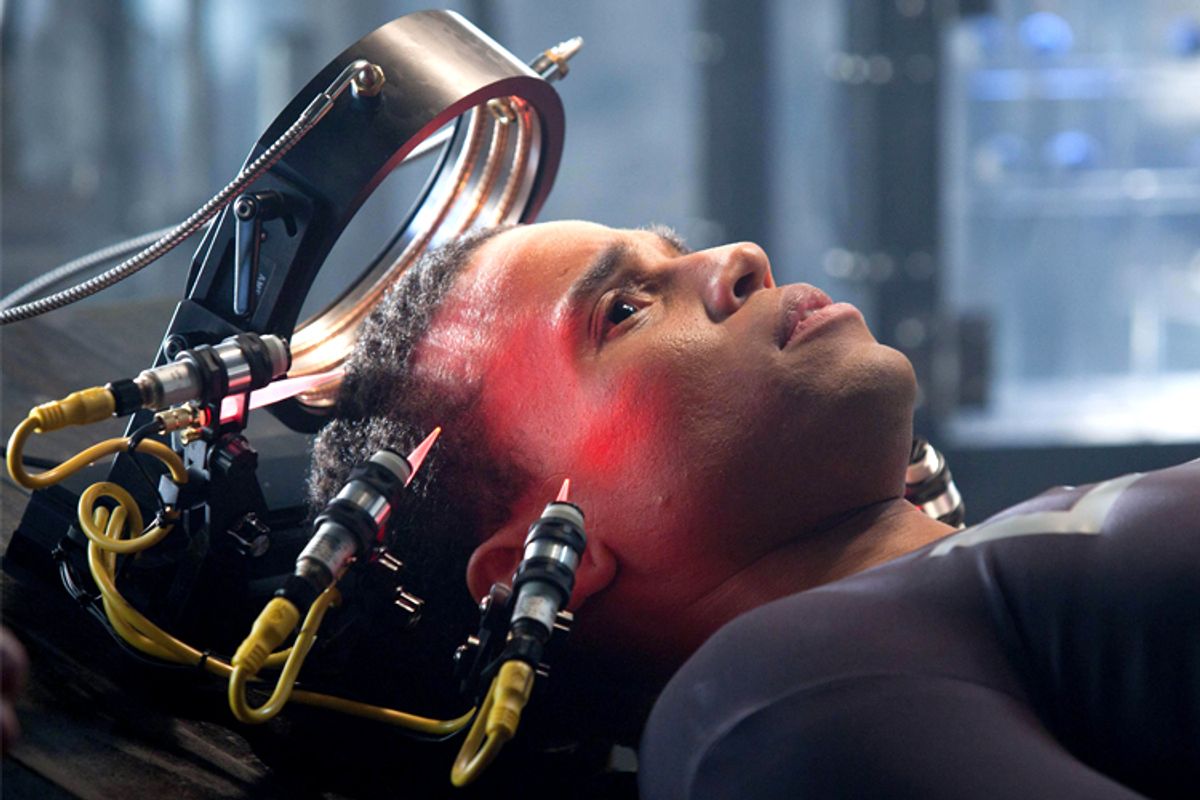 There's a scene in the pilot episode of FOX's "Almost Human" where Dorian, a DRN model police android, approximates human behavior by awkwardly injecting the word "man" into his speech patterns. "I'm running my colloquialism routine," says the recently recommissioned robot, "so I express most data conversationally, man." In this moment, it seems that Dorian, played with a sort of Zen charm by actor Michael Ealy, is only pantomiming his humanity as a way to blend in with his android-hating human partner John Kennex (Karl Urban). Later, however, Dorian insists that his artificially-designed emotions are as real as any human's. "I was made to feel," he tells the detective.

If the former is true, then it is likely that, throughout the course of the show, Dorian will struggle to understand certain intricacies and nuances of human behavior -- specifically those that go against his presumably methodical and logical programming. If the latter is true, expect Dorian to experience difficulty in making sense of his own emotions as one newly born into an adult form. If any of it sounds familiar, that's because we've seen it before. Wikipedia defines an android thusly: "a robot or synthetic organism designed to look and act like a human, especially one with a body having a flesh-like resemblance. Until recently, androids have largely remained within the domain of science fiction, frequently seen in film and television." The android, aside from being a very cool idea with a myriad of narrative possibilities, is a device frequently used by sci-fi storytellers to hold human behavior and emotion under a microscope.

Zack Stentz is the screenwriter behind such successful Hollywood blockbusters as "Thor" and "X-Men: First Class." He also served as a writer and producer on "Fringe" and "The Sarah Connor Chronicles," which featured Summer Glau as the latest in the line of killer machines that began with James Cameron's iconic Terminator android. Via email, Stentz told me the following:

I think there are several different ways to use an android character to explore what it's like to be human. Traditionally, Gene Roddenberry liked to use his android characters, both in the original series but particularly 'The Next Generation's' Commander Data, to explore the human condition by having them as outsider characters looking in on the world of emotion and irrationality with curiosity and sometimes envy. There's a marked tendency in science fiction television to use android characters as Pinocchio figures -- they all seem to want to become 'real boys' despite usually being stronger, faster, and smarter than the humans they envy.

Personally, I'm partial to Marvin the Paranoid Android from the BBC's hilarious, low-budget adaptation of Douglas Adams' "Hitchhikers Guide to the Galaxy." The clunky service bot's cynical take on man's nihilism is both infinitely quotable and increasingly relatable in today's over-stimulated, never-satisfied society. (Marvin was also the funniest, best-devised contrast to another iconic android -- George Lucas' annoyingly upbeat, eager-to-please C3P0.) Hell, you could probably find traces of what Stentz is talking about in "Small Wonder's" Vicki the Robot. But "Star Trek: TNG's" green-tinged Lieutenant Commander Data is, by far, the most well known synthetic human on the small screen to ever puzzle over what makes people sad or why we have sex for pleasure.

Data was, as Stentz points out, stronger, more agile, and arguably more intelligent than his counterparts in Starfleet. Nevertheless, his lack of social intelligence continued to be a source of embarrassment to him. Though man-made, Data was described as "sentient," which allowed the writers of that show to explore the deepest notions of what it means to be self-aware. Defining sentience and establishing its implicit rights are common themes in such android-heavy films as "I, Robot" and "Blade Runner" -- which is, of course, loosely based on Philip K. Dick's short story, "Do Androids Dream of Electric Sleep?"

But if casting the android as Pinocchio pressing his nose up against the glass, gazing longingly at humanity is such well-trodden territory, where is there left to go with the character type? Stentz continues:

I actually preferred the approach we took on "The Sarah Connor Chronicles" under the guidance of show creator Josh Friedman, which was to treat the robot/android characters as true alien intelligences, who process information and look at the world in truly different ways due to the fact that they were built artificially and not by three and a half billion years of biological evolution. You're still exploring the human condition with those characters, but more by way of contrast. Can a being that was built and not grown ever "feel" emotions? And if they do, are those emotions like ours, or something fundamentally different?

The Sci-Fi Channel's (now Syfy) "Battlestar Galactica" update featured androids whose synthetic -- not to mention malicious -- nature was so disguised by their semblance of tragic humanity that it could even be hidden from the Cylons themselves. Ultimately, though, their social hierarchy and tactics were different enough from those of the humans they sought to eradicate that -- once revealed -- they came across as a different race entirely. At the same time, the Cylons' efforts to infiltrate the colonists' society did express plenty about human behavior.

Androids have not yet reached the uptick in popularity of, say, vampires in recent years, but Stentz believes that there is a very specific reason for the resurgence of the type in popular fiction these days.

Robot and android characters also feel particularly relevant in an age when we're beginning to realize that not all humans process information and experience the world in the same ways. I don't think it's a coincidence that many autistic people (Temple Grandin to name one example) have written about how closely they identify with android characters like Data. There are some very relevant analogies in how some people with autism and Asperger's syndrome interact with the neurotypical with how an intelligent android tries to understand human behavior from an outsider's perspective.

For him, androids also have a personal appeal:

In fact, I sometimes wove some of my autistic daughter's traits and mannerisms as well as my own (I've been told by her therapists that I'm on the Asperger's spectrum myself) into the writing of some of the robot/AI characters on "The Sarah Connor Chronicles." It was fun to bring her to the set one day so she could watch a scene being filmed between an artificial intelligence and a little girl. She understood immediately that the dialogue was modeled on a real conversation between her and her brother, and was greatly amused by it.

Exploring the unconventional methods by which an artificial intelligence like "Almost Human's" Dorian processes information can be fascinating. But, often in fiction, it is not the android's thinking that is really being examined. In the case of this show, for example, Dorian is incredibly handsome, mostly jovial, and well-educated in how to get along with others. His partner, on the other hand, is surly, uncooperative and severely scarred -- physically and mentally -- by personal and professional tragedy. As he was not born, but created in his current form, Dorian boasts little backstory and will probably serve mostly as a mirror to reflect the turmoil of the tortured soul sitting next to him in the squad car. If it seems an unfit job for man or machine, don't worry too much. It's how he's programmed.