McDonald's tells workers to "sing away stress," "chew away cares" and go to church 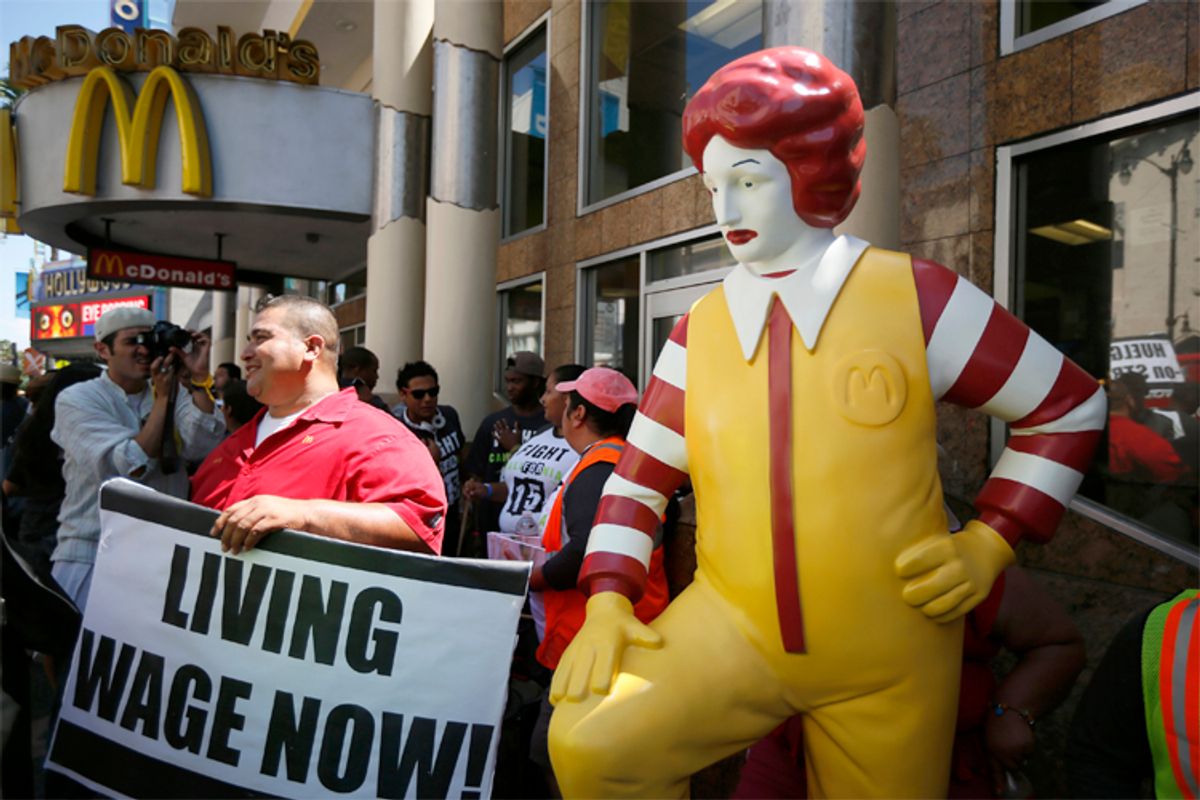 McDonald's advises its low-wage workers to try “breaking food into pieces” to feel full, and urges them to “pack your bags” for vacation, “chew away cares” with gum, “keep the faith” by going to church, and “sing away stress.”

These and other tips appear on a “McResource Line” website created by the McDonald's Corp. to advise workers on stress, health and personal finances. Among the tips that appear on the site: “Chewing gum can reduce cortisol levels by 16%”; “At least two vacations a year can cut heart attack risk by 50%”; “Singing along to your favorite songs can lower your blood pressure”; and “People who attend more church services tend to have lower blood pressure.” The site also offers dietary tips for physical and mental health: “The tryptophan in cheese will increase serotonin levels and boost your mood”; “Trans fats raise the risk of depression, while olive oil can prevent the blues” and “Breaking food into pieces often results in eating less and still feeling full.” (That last one may be intended as dietary rather than budgetary advice.)

Some of those tips are featured in a new video slamming McDonald's, released Tuesday afternoon by a group behind fast food workers' strikes. The video, posted on a website started by the New York group Fast Food Forward, ends by declaring, “Had enough of McDonald’s Help? So have the more than 700,000 people who work for them,” and exhorts viewers to support them. McDonald's did not immediately respond to a request for comment.

While McDonald's offers tips for individual self-improvement, and has responded to past criticism by touting its opportunities for individual self-advancement, the past year has seen an unprecedented wave of collective action against the fast food industry. As I’ve reported, a wave of one-day strikes, which began a year ago in New York City, spread to include 60 cities in an August walkout, all demanding $15 an hour and the chance to form a union without intimidation. The Service Employees International Union has been the main national player behind the campaign’s funding and strategy. The campaign has previously slammed McDonald's for the sample budget it offers online for low-wage workers, and for a McResource phone line whose advice includes seeking food stamps.

The McResource site suggests workers focus on the positive: “Stress hormone levels rise by 15% after ten minutes of complaining.”