Sorry, Frank Bruni: Liz Cheney is no worse than Congress

Pundits privilege interpersonal ethics over the suffering of millions, and pretend gay marriage is beyond politics 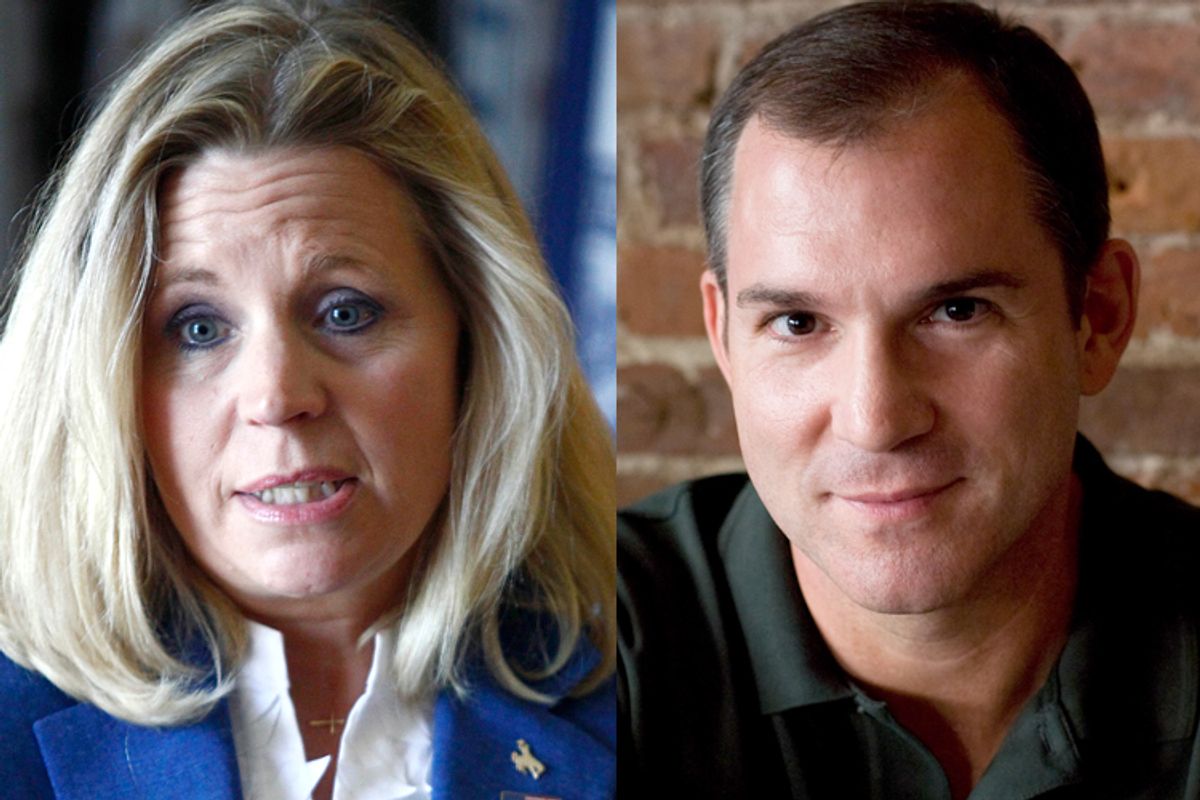 Like Frank Bruni, I’d like to live in a country where people who want to get married can do so regardless of the gender of their partner. And like Bruni, I’ll shed zero tears if torture advocate Liz Cheney suffers an embarrassing defeat despite her cynical-seeming renunciation of the rights of queers like me.  But I didn’t thrill to Bruni’s latest New York Times column, a fish-in-a-barrel slam on Cheney that reflects the frustrating ways we talk about gay rights and political morality.

Bruni notes the Times’ reporting that after Liz expressed support for “the traditional definition of marriage,” and her gay sister-in-law and sister shot back on Facebook, “Liz and Mary aren’t speaking to each other now, and there’s a long shadow over the Cheneys’ holiday get-togethers.” Then he asks, “Is any political office worth that?”

As it regards Cheney, that question is moot in all kinds of ways, both because she’s likely to get creamed and because her career in public life suggests she’d be up to no good in the Senate. But Bruni’s rhetorical question is revealing, because the presumed answer – that inter-familial strife trumps mere politics – reflects an unstated assumption that marks lots of U.S. political reporting. When members of the media question politicians’ moral standing, it’s more likely to be over an affair (“sex scandal”) or campaign finance violation (“ethics scandal”) than a vote on war or climate change. Just compare the reactions to Bill Clinton’s affair with an intern and his welfare reform bill, which Bruni’s paper reported last year had driven some poor people to sell their own blood for cash.

The next time Liz Cheney hugs or kisses her niece and nephew, Bruni suggests, “If there’s not a knot in her stomach, then there’s nothing at all in her heart.” Few talk that way about the “hunger cliff,” created by Congress, that’s further immiserating millions of Americans on food stamps.  That’s just the stuff of politics.

But like many in the media, Bruni makes an exception for gay marriage, holding it – like interpersonal decency – above politics as usual (thus the Cheney story hits an equal marriage and household comity sweet spot). To his credit, Bruni makes this explicit, writing that “Liz’s decision to chart a course and publicize a view bound to offend her sister” is both “entirely volitional” and “entirely different from airing other ideological disagreements within families.” His argument? “Conflicting views on abortion or the death penalty don’t challenge the very structure and foundation of a loved one’s home,” whereas “questioning the validity of a marriage does.” By doing that, he writes, “you’re saying that you have qualms with who they are,” and Liz should’ve kept that to herself.

That imagined distinction may explain the greater willingness of major outlets to officially endorse marriage equality (compared to other issues where their voices might make more of a difference). But Bruni’s chosen examples may suggest more about whom he imagines around a Thanksgiving table than anything else. Might not one of the millions of women who’ve had an abortion – or the greater number who’ve contemplated it – take it personally if a relative argued that that should land them in jail, or that the decision whether to gestate and deliver wasn’t one she deserved to make? Would she really be wrong to take it as a sign of “qualms with who they are” rather than mere antiseptic “ideological disagreement”? And how about if you’re the one on death row? The political and the personal aren’t so easily cleaved.

Queer people have seen epic progress toward social and political equality, for a range of reasons including audacious direct action. As some noted when Rob Portman cited his gay son as a spur to his evolution on marriage, it helps that LGBT people are spread through every corner of U.S. society. The same can’t be said for other traditional hate-objects in U.S. politics, like the poor. (LGBT people who aren’t white male citizens are less likely to show up in senatorial families or top TV shows, and more likely to face dire consequences from exclusion from marriage, or the less-discussed scourge of legalized employment discrimination.) But I’d ask Bruni: When Rep. John Mica held up a sign during a ’95 congressional session on welfare reading, “DON’T FEED THE ALLIGATORS,” was that just ideological disagreement? When Democrats and Republicans let unseen Americans’ food stamps get slashed, was that less immoral than bringing pain or shame on a relative? And is Liz Cheney, just because she has a gay sister and publicly rejected gay marriage, more deserving of scorn than them?