Humans shipped across the country: How America exports inmates to private prisons

"Horrendous," says a man shackled for 36 hours on a surprise bus trip from Vermont to Kentucky 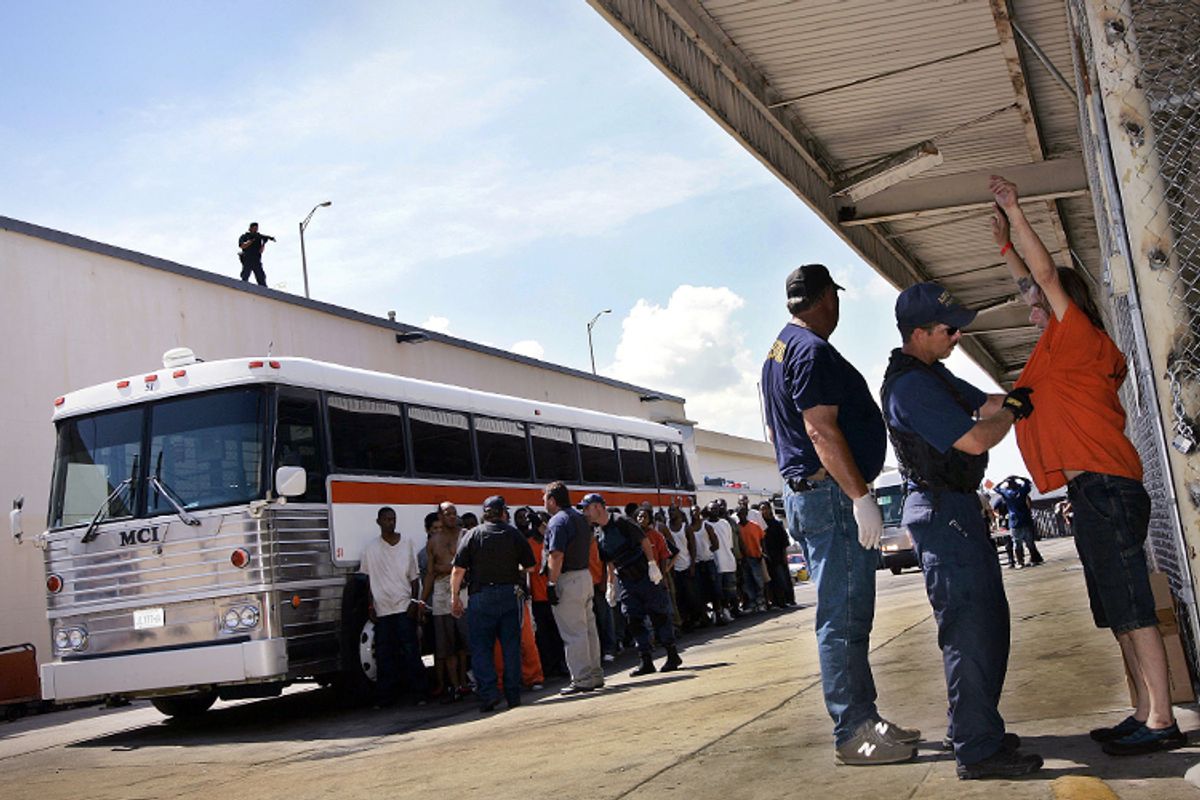 Over 10,500 U.S. prisoners are currently being held in private prisons hundreds or thousands of miles away from the states that sent them there, according to a new report from the progressive group Grassroots Leadership.

Kirby was joined Wednesday by interstate transfer critics including Danielle Rigney, the mother of a California inmate who was shipped to Arizona in July. Before that happened, she told reporters, “he continued to have hope for the future” and “was able to watch his sisters grow up, share in our joys and our sorrows.” Now, she said, “because he is 15 hours away, each trip costs close to $1,000” and “his father hasn’t been able to visit.” Rigney added,“I can truly see him becoming institutionalized … we are losing touch. We are losing the battle … When my young son was arrested, he was a boy. He is now a man.”

The Grassroots Leadership report, "Locked Up & Shipped Away: Interstate Transfers and the Private Prison Industry," argues that such transfers are “diminishing prisoners’ ties to family and community” while they “serve the interests of an industry that views prisoners as commodities and perpetuate our nation’s mass incarceration crisis.” Kirby charges that “With little public scrutiny, state officials have pointed to overcrowding as justification for sending incarcerated people to out-of-state prisons, rather than prioritizing decarceration and sustainable alternatives to incarceration to address prison overcrowding.”

The report includes the story of a prisoner, not identified by name, who “said he had no clue what was happening when officers came into his Vermont cell in the middle of the night, told him to get up and grab his things, and refused to answer when asked where he was going. Shackled to the person next to him, he endured the 36-hour bus ride, still without any idea where he would end up.” The man called the practice “horrendous,” and said “you’re taking people who, whatever support network they may have, is gone.”

Asked about the report, CCA public affairs manager Mike Machak emailed, “We are proud that we’ve been one of the very beneficial tools that state policy makers have used to address prison overcrowding that the federal courts have deemed unconstitutional.”  Machak said the company “firmly believes we have the opportunity and responsibility to help inmates develop the skills and values they need to be successful when they leave prison.” He added, “The inmates entrusted to our care are housed in state of the art facilities with access to rehabilitative programming such as adult education, vocational training and substance abuse treatment.”

Critics painted a very different picture. Monica Hopkins, who directs the ACLU of Idaho, described a “horrid history we have over 16 years of transferring inmates out of state, to facilities where we found abuse and poor living conditions, squalor, understaffing and deaths – including suicide and deaths within facilities that couldn’t be monitored because of a lack of transparency, because quite frankly, they were out of state.” Hopkins told reporters she found it “shocking” that Idaho would continue to keep prisoners in CCA facilities after the company “have been held in contempt of court … and are actually leaving our state.”

The Grassroots Leadership report recommends that state lawmakers ban “the exportation of incarcerated people,” and instead “prioritize strategies to reduce prison populations …” In California, which according to the report currently has more of its prisoners out of state than the other 49 states combined, Californians United for a Responsible Budget statewide organizer Diana Zuniga told Salon that Democratic Gov. Jerry Brown’s administration has “a huge responsibility” to effect reform. Given a Supreme Court ruling that the state’s prison conditions violated the Bill of Rights, and a finding that expanding “good time” custody credits could cut the prison population by 20,000, Zuniga said, “The responsibility is really on the administration right now to move forward on those reforms, or to continue to have people in out-of-state facilities and continue to expand the system.”

Asked about the report and Zuniga’s critique, state Department of Corrections and Rehabilitation press secretary Jeffrey Callison emailed that “California would strongly prefer to have none of its prisoners housed out of state,” but “the continuing prison-crowding court case has made it all-but impossible for California to follow through on its plan to end the out-of-state program on schedule” by 2016. While a September bill signed by Brown “does allow for more inmates to be sent out of state,” said Callison, “it is important to note that sending more inmates out of state is considered to be the very last resort.”  Callison argued it “takes a selective reading of the facts to assert that Governor Brown and his administration bear a ‘huge responsibility’ for the fact that the out-of-state program continues.” He added that Brown “has repeatedly said that he has no intention of approving the early release of thousands of inmates. On the scale proposed, that would necessarily involve the release of more serious offenders, which would place a burden of local law enforcement, courts, jails and probation.”