"Philomena": The nuns stole her baby, 50 years ago 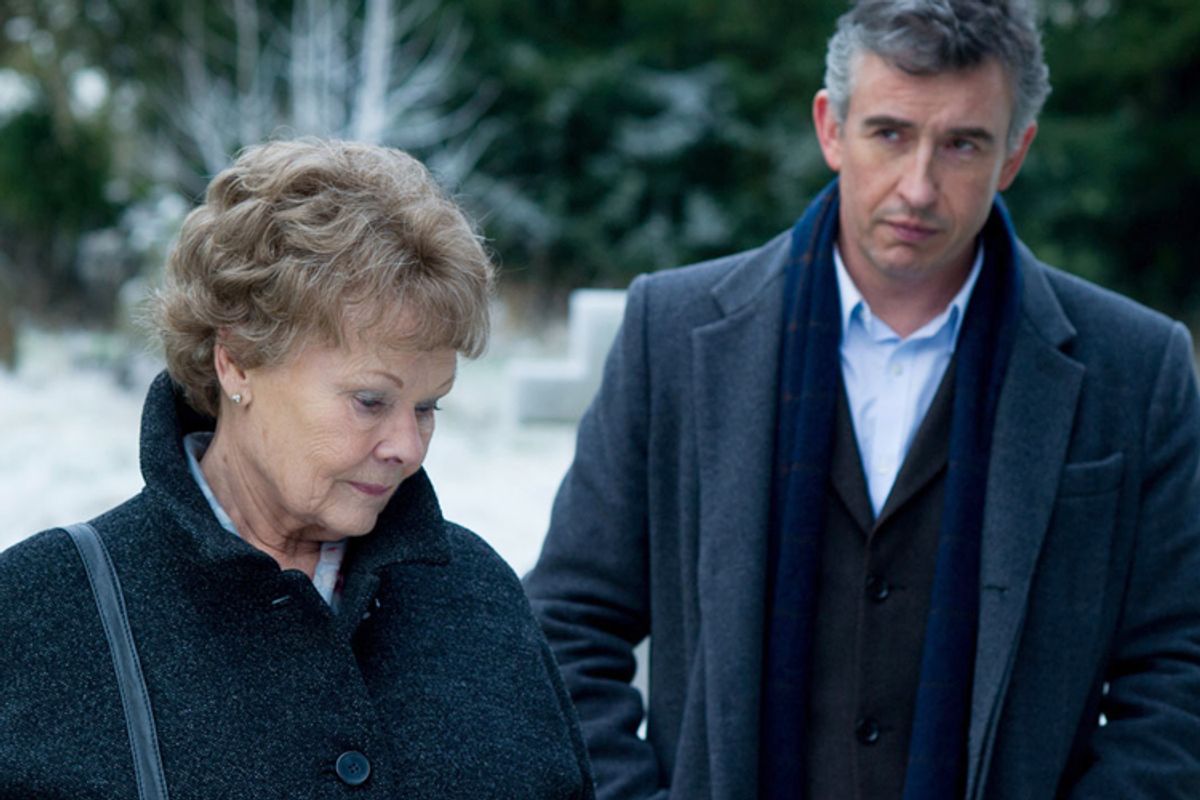 I feel considerable resistance, in theory, to a movie like “Philomena,” a classic work of fall-season awards-friendly cinema whose every move seems strategically plotted. It pairs one of the most beloved figures in world cinema (Judi Dench) with an acidic British star who’s never broken through in America and is looking to reboot his career (Steve Coogan). You get exactly one guess as to which member of this odd couple is the guileless innocent who needs a bit more steel in her spine and which one is the hard-boiled cynic who lacks a heart. Furthermore, “Philomena” also represents the latest comeback effort for English director Stephen Frears, who’s been cranking out workmanlike pictures since his 1980s heyday with only intermittent success. (“The Queen” and “Dirty Pretty Things” would be his best movies of this millennium.)

Fortunately, if and when you’re able to shovel those contextual questions to the back of your mind and watch the movie, “Philomena” turns out to be a subtly told tale of tragedy and redemption, with much of the sentimental payoff you’re expecting but several intriguing plot twists along the way. This is Coogan’s project, to a significant extent. He produced the film and co-wrote the screenplay (with Jeff Pope), which is based on a real-life tabloid story (ultimately a book, "The Lost Child of Philomena Lee") that mesmerized the British public. But he understands where the heart of the film lies, nicely underplaying the role of Martin Sixsmith, a one-time star journalist and political apparatchik who has been ousted in a government scandal and is seeking both a payday and a way to relaunch his career. Martin has a bit in common with Coogan himself, a huge comedy star in British TV whose boundlessly insincere persona has never translated to the big screen.

At first, when Martin hears the story of Philomena Lee (Dench), an Irish-born retired nurse whose illegitimate child was forcibly taken from her, 50 years ago, and literally sold off to new parents, he dismisses it as a “human-interest story.” What that means, he helpfully explains to the young woman pitching him the idea – she’s pouring wine at some chattering-class party, and has overheard him discussing his career dilemma – is that it’s really a story about “weak-minded and ignorant people,” written for the kinds of newspapers read by weak-minded and ignorant people. Indeed, when Martin agrees to meet Philomena (Dench), he can barely conceal his condescension as she chatters on about romance novels and her new titanium hip, and is puzzled by his sardonic Oxbridge sense of humor. But as an editor he met at that party has told him, it’s a great story as long as the ending is “really, really happy or really, really sad.” It’s not too much of a spoiler to say: Some of both!

Speaking as someone with numerous aunts and cousins of approximately Philomena’s class and background, I felt a bit leery about seeing the most eminent English stage actress of our time play an Irish immigrant from a working-class background. I needn’t have worried; this is Judi Dench we’re talking about, and she gets it all right, from Philomena’s quilted jackets to her concealed religious torment to the fact that she’s a good deal more worldly and intelligent than she lets on. We never see the inside of Philomena’s house, with its knickknacks in Belleek china, a work-basket and crossword shelf next to her TV chair, and the exposed Sacred Heart of Jesus overlooking the staircase, but I have no doubt they’re there. (Philomena is a bit too aspirational, I am guessing, for the paired portraits of John Paul II and John F. Kennedy.) Nor is there any hint of stage-Irish to her speech; Philomena is after all a convent-educated girl from the Irish midlands, not some sort of bog-woman with no manners at all, if you please.

Philomena Lee’s story became famous because it was a dramatic tale with unexpected twists and turns, but also because what happened to her happened to thousands of other Irish girls and young women between the Depression and the late 1960s. Those were the years of greatest cultural isolation in Ireland, when the Roman Catholic Church exercised unchallenged ideological hegemony, and family secrets of all kinds were swept under the carpet, especially when they involved carnal sin. Unmarried young women who became pregnant – all forms of contraception were of course illegal, and even discussing abortion was unthinkable – had disgraced their families, their communities, their sex and their nation. Many were abandoned to a system of convent workhouses known as the “Magdalen laundries,” where they were worked as slave labor and birthed babies who were given away to generous donors, often affluent American Catholics.

When Martin and Philomena go back to the convent in the Irish countryside where Philomena had her baby boy, 50 years ago, everything seems to have changed. The nuns who ran the place in the bad old days are all gone (or so we believe at first), and the youngish woman who’s in charge now welcomes them with tea and cake and would love to help – if only all the records hadn’t been destroyed in that ever-so-convenient fire! Philomena still regards herself as a good Catholic, and is inclined to thank the sisters for their hospitality and go back home. But Martin’s reportorial instincts have been engaged, and he’s beginning to change his mind about whether the stoical Philomena is such an ignorant and weak-minded person after all.

Once the BBC correspondent in Washington, Martin is able to call on his connections to determine that Philomena’s son did indeed emigrate to America as a 2-year-old, and grew up there under a different name. So the duo relocate to a D.C. luxury hotel – Philomena is enthralled by the chocolates on the pillow, and lets Martin know he can borrow the plush bathrobe in her suite any time he likes – and I won’t go much further than that. Except we can say that identifying Philomena’s son, and finding out what became of him, turns out to be the easy part. Earlier in the film, Martin muses out loud that the boy’s fate is irrelevant: “He could be president of IBM or he could be a hobo. It really doesn’t matter.” But it does. As the unexpected truth emerges, Philomena has to face her most profound fears about her long-lost son, and Martin must face the fact that this noble and tormented woman is both braver and stronger than he’s ever been in his entire life. (All I will add is that hearing Judi Dench say the word “bi-curious” is its own reward.)

Ultimately, it’s too easy – too Martin-like – to dismiss “Philomena” as formulaic Harvey Weinstein holiday fare. Dench and Coogan have such wonderfully prickly chemistry together, and are so full of surprises, that their relationship never feels fake, and Frears is not a director to overmilk moments of sentiment. Both Philomena and Martin have to give up long-cherished ideas about themselves, and even embrace a politics of confrontation, before Philomena can find her lost child at last. Is Dench in line for yet another Oscar nomination here? She might be, but far more important, “Philomena” really is that rarest of commodities: a holiday movie for the entire family, from kids of 11 or so on up to grandma, that will insult no one and leave no one out.