How a toy company got the Beastie Boys wrong 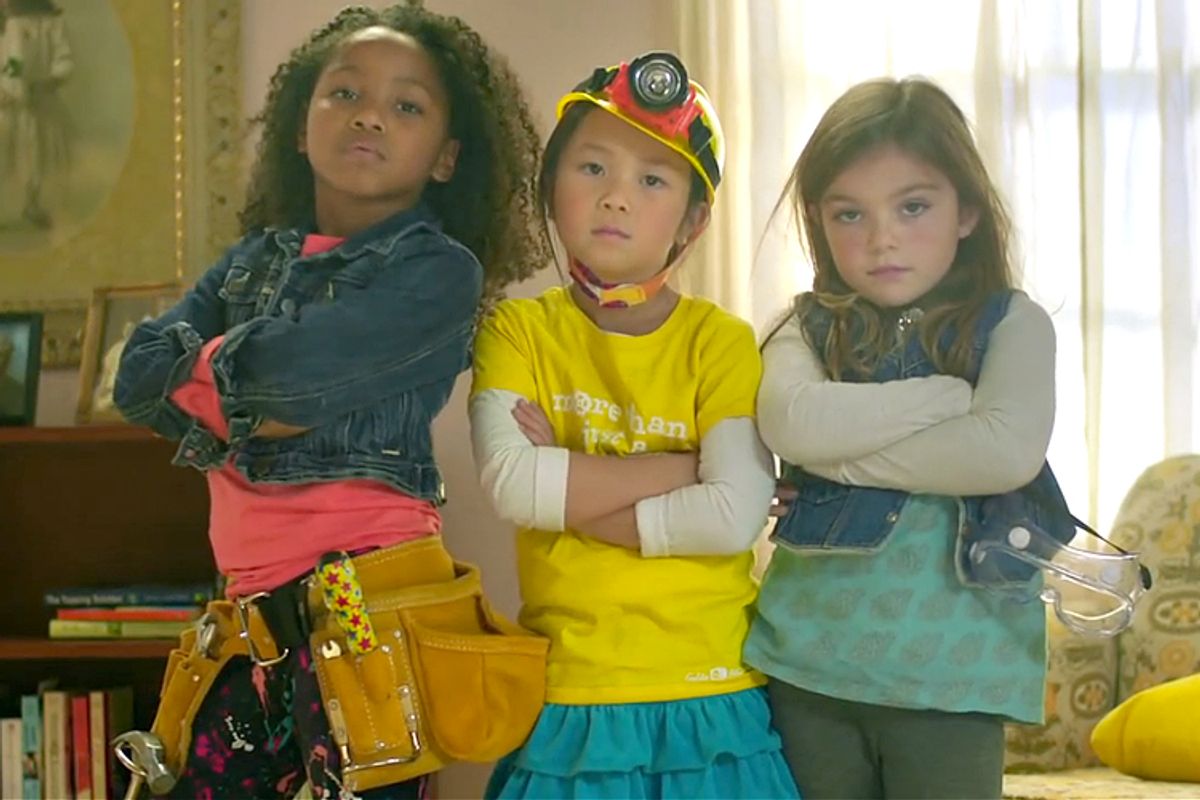 When the toy company GoldieBlox went viral earlier this month with an adorably inventive, celebratory anti-princess ad, it didn't just do so with its cheeky Rube Goldberg narrative. It also did it with a witty reworking of a Beastie Boys classic, turning "License to Ill's" "Girls" into a pint-sized anthem. "Girls!" it sang. "To build the spaceships! Girls! To code the new apps! To grow up knowing that they can engineer that!" But the seemingly universal GoldieBlox love party hit a snag late last week, when the remaining Beastie Boys complained about copyright infringement.

When I first saw the GoldieBlox ad, in all its marvelous controlled mayhem, I eagerly shared it with my own two daughters. And when I heard of the Beastie Boys' action against it, I was bummed. Not because the Rock and Roll Hall of Famers stepped in, but because I had assumed, until the news revealed otherwise, that they'd given permission for its use. GoldieBlox is now heading to California federal court to argue that its revamped recording is not an infringement but a "parody." And that sucks.

The reworked version of "Girls" is decidedly satirical – and mighty cute. "You think you know what we want?" sing a chorus of little voices. "Pink and pretty, it's girls. Just like the fifties, it's girls. You like to buy us pink toys, and everything else is for boys. And you can always get us dolls. It's time to change; we deserve to see a range. Cause all our toys look just the same! And we would like to use our brains!" What kind of a spoilsport would want to shut that down? Maybe one with a good reason.

The band's reps say that "There was no complaint filed, no demand letter (no demand, for that matter) when [GoldieBlox] sued Beastie Boys." And on Monday, the Beastie Boys released a clarifying statement in an open letter asserting that the group was "impressed by the creativity and the message" and that "We strongly support empowering young girls, breaking down gender stereotypes and igniting a passion for technology and engineering." But, the Beastie Boys added, "Make no mistake, your video is an advertisement that is designed to sell a product, and long ago, we made a conscious decision not to permit our music and/or name to be used in product ads. When we tried to simply ask how and why our song 'Girls' had been used in your ad without our permission, YOU sued US." Not cool, GoldieBlox.

In its action, GoldieBlox petulantly references the "highly sexist song 'Girls'" and presents itself as boldly delivering "exactly the opposite of the message of the original," while criticizing the Beastie Boys for "lashing out" with the copyright infringement claim. (Just to make things a little more interesting, the Hollywood Reporter notes that the Beastie Boys themselves are, meanwhile, still embattled in a decades-old copyright battle over the samples in its own music history.) So, wait, it's not copyright infringement to use a song to sell your product if your company decides that the original song was "highly sexist"? How convenient! But putting aside the fact that the band itself has now clearly stated now it doesn’t want its music to be used in commercials, the GoldieBlox paperwork raises questions about what exactly the Beastie Boys were originally up to, all those years ago.

I was a college student when the band first broke, and my hip-hop-loving girlfriends and I immediately fell obsessively in love with them. And though we would not have dreamed of seeing them when they opened for Madonna -- that shallow Boy Toy we held in utter contempt -- we eagerly lined up for the Raising Hell tour. The Beasties' set featured female fans dancing in cages and a gigantic, inflatable penis. It was not gender studies class approved fare. We thought it was a riot. In particular, I remember never finding the song "Girls" anything but hilarious, though I recognize now that our amusement came from a place of unique privilege. There we girls were, living independently, getting educations, with nobody to tell us to "do the dishes, to clean up my room, to do the laundry." Hell, we barely did that stuff for ourselves -- the very idea we'd ever seriously listen to any man's commands to do it for him was laughable. That's why, like many girls who heard the song then and many more who've discovered it since, we fans didn't see ourselves as the "Girls" at all. In our minds, we were always the Boys, loud and sloppy and swaggering – albeit in a deeply nerdy way – in a manner that made any White Castle we entered our White Castle.

And now, 25 years plus later, I have to ask, I'm sorry, were we supposed to have taken those songs literally? Because I wasn't even sure what they meant about Jerry Lewis there. We just thought they were so dumb, they were kind of brilliant. As it turned out anyway, the Beastie Boys really weren't such terrible sexists after all. As MCA later explained in "Sure Shot," "The disrespect to women has got to be through. To all the mothers and sisters and the wives and friends, I want to offer my love and respect till the end." When they toured with Prodigy, they asked the group not to do its considerably-less-droll-than-"Girls" hit "Smack My Bitch Up." As for "Girls" itself, they've apologized for it and dropped it from their live act years ago.

When you love popular music, you have all kinds of seemingly contradictory feelings about it. You spend a lot time shouting exuberantly along to the lyrics with your friends and then going, "Wait, what was that?" You hope that artists outgrow the stuff that seems to be coming from a place of genuine ignorance or stubbornness, and you're disappointed when they don't. You pray to God you can recognize a joke when it's just a joke. Hip-hop, like sex, isn't always politically correct. And like sex, that's what makes it fun and funny.

The Beastie Boys spent a better part of their formidable career making it very clear to even the most casual observer that they were not, in fact, a pack of infantile misogynists. But even if they had been, that wouldn't give anybody – even a company with a positive, girl-powery message – the right to steal from them. "Girls" is the Beastie Boys' song, and they shouldn't be expected to hand it over to anybody in some bizarre legal stab at public shaming. That's not the inventive, original thinking that GoldieBlox appears to espouse. Instead of hiding behind the thoroughly lame excuse that "The song was sexist, ergo we can take it to sell our toys," GoldieBlox could instead put on its big girls pants and make something awesome now with its creative talent. The company could instead prove that when challenged, it's crafty. And that's just my type.