I grew up suffocated by my mom's stuff. Now that I'm pregnant, I worry what habits I might form – or pass along 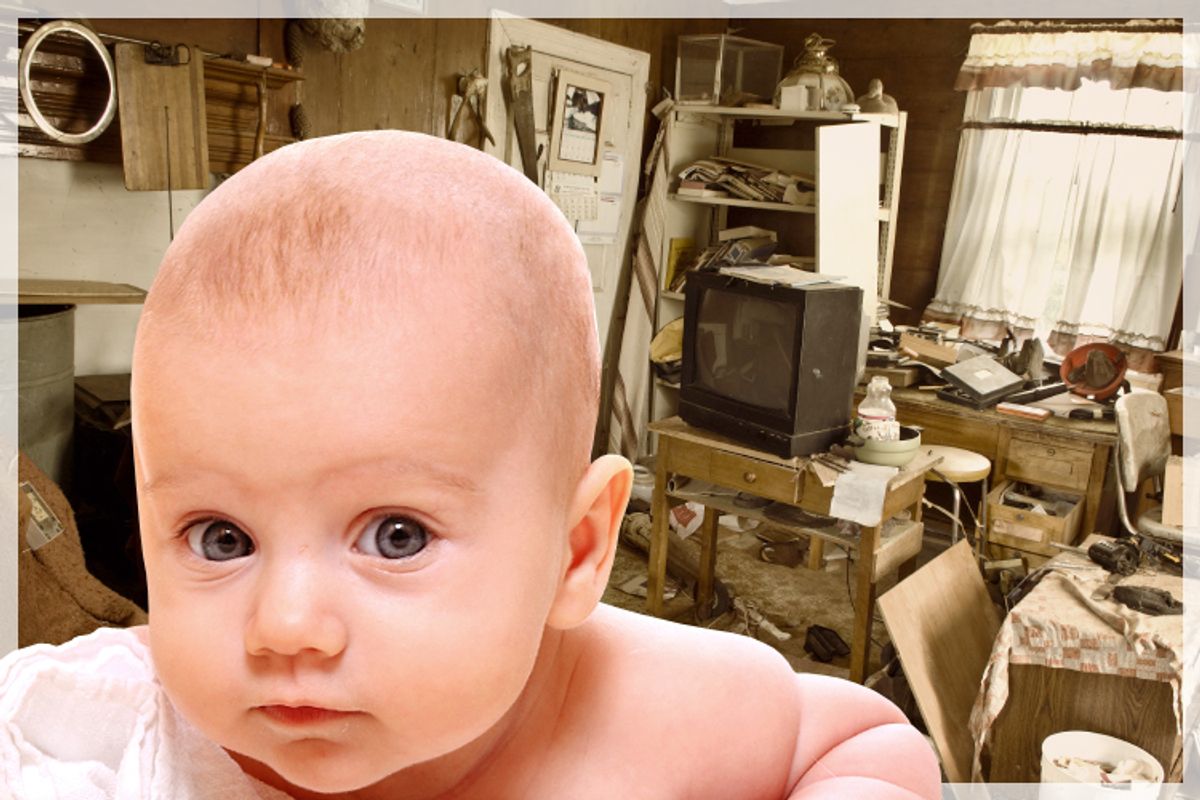 “A new breast-shaped bottle with saliva-mixing technology!” rang out from my inbox. A scroll through the mommy blogs and baby-to-be newsletters revealed that we lived in the future: Sedan-sized strollers with GPS, cell phone chargers and headlights. Faux shearling booties specially constructed for not walking. Baby monitors with LED movement indicators, video streaming, temperature sensors, they even breastfeed for you. Not only are you excited to be a mom, they screamed, you are excited to do some serious shopping!

I wasn’t. At seven months pregnant I forced myself to enter my local Manhattan baby store, which was draped in electronic milking machines and fair-trade infant bikinis. The smiling saleslady – after recovering from her initial shock at how long I'd waited to order a crib – politely began to barrage me: Do you want the organic changing table? How about the multimedia crib entertainment system – “Twinkle Twinkle” and a light show!

Hormones, the saleslady said, rolling her heavily mascaraed eyes. But she was wrong. My dismay was not chemical. It was not about Jon’s spending money on artisanal toys, nor my Jewish parents’ superstition that if you even mention the unborn baby, let alone buy it a wardrobe, the pregnancy will result in immediate termination. Mine was the anxiety of a child-of-a-hoarder -- who’d married another child-of-a-hoarder. Mine was the anxiety of stuff.

That night, I gestured to Jon over my enormous stomach at our neat home office, sparse and organized like the rest of our white-walled apartment, which was slated to become the nursery. “It’s taken me years to accumulate all this nothing!”

After 33 years, I’d finally made my dream home. Now, I panicked, it would be overfilled. Ruined. Again.

The Montreal duplex where I grew up was lined with half-used Kleenex, newspapers, a Tetris puzzle of credenzas. My mother, born in Kirgizia on my grandparents’ flight from the Nazis, had a childhood of deprivation. She saved everything, causing chaos in which report cards and bat mitzvah checks were lost forever, leaving me in constant panic. She tried to connect, and give me what she’d lacked, but couldn’t find the right way, instead erecting physical and emotional barriers. Buried by her gifts – which included the full run of fake Cabbage Patch Kids – there was little room for me to grow. I feared closeness with others, felt relief when my 12-year-old crush dumped me (how could I ever bring him home?) and was too filled with shame to date. Mom’s mother also had cupboards bursting with cheap dresses. The women in my family clung to everything.

With all this home, I felt without one. Suffocating, I ran.

All I brought to college in the U.S. was my computer and clothes. Since no one would see my parents’ house, I posed as a sophisticated minimalist. Trying to make sparse seem chic, I purchased two blue wineglasses, but was nervous that my guests thought them tacky. I stopped inviting people. Attracted to white-walled galleries, I spent nomadic semesters doing museum internships in Europe and even Africa, parading with a mere backpack between hostels and couches. While I had no permanent brick walls around me, I built them inside. When my first boyfriend suggested moving in together, I fled.

In London, I sublet my first adult room in a decrepit flat above a pub. Never mind I lived with hard-house DJs and the street soot drenched my books, it was spacious, with big windows, and felt airy and empty – large enough for my secrets. I’d brought just one duffel bag. Less than college. I carefully purchased black wiry candlesticks and slick Ikea chairs. My books lined the windowsill; minimal cosmetics piled on open shelves. I wanted to see everything, to be in control. “Sweet digs,” friends noted. I hosted parties. Drunk, I feigned ease at sharing my space.

Nothing could make me leave that room – except love. At 26, I fell for Evan, an older academic who took the role of teacher. He taught me the difference between a garlic press and an egg slicer, since I knew nothing of sautéing, braising, even toasting. (I did not mention that my parents’ kitchen had grown into a repository for moldy cereal and obsolete fax machines.) He convinced me to abandon my immature share. I rented a one-bedroom miles away from his garden flat, in East London. It was both the size and consistency of a shoe box, and in a heroin-strewn enclave, but it was mine. I bought no throw pillows or posters, and tied back all drapes to form crisp geometric angles. Weeks later, Evan dumped me at an Indian restaurant. “You don’t have things that make me feel comfortable,” he complained. He confessed with delight that he’d fallen for a single mom who had matching plate sets. Despite my clean turf, I was still domestically inadequate. My attempts toward order and closeness left me alone and in a mess. I’d become so good at ridding myself of things, I’d gotten rid of my boyfriend. I couldn’t hold on to anything.

I spent four years admitting my cluttered heritage to myself. I purchased a red shawl and rug, which I added as artistic touches to my quarters, gaining confidence in my ability to make a home. I invited in a new boyfriend and showed him how to make coffee like Evan taught me, as if sharing a wild sex trick. I began to learn that I wasn’t my mother, or her house. I’d left Montreal 12 years earlier. Finally, I’d built a foundation.

My first date with Jon was more of a fight. He called me old, I called him cheap, he ran for the tube. I walked home, OK with the idea that I could be alone.

But Jon texted: He’d had a good time.

I realized, so had I. He brought out my suppressed brashness. Our rapport felt honest.

I was confident, but did not rush. After three months, I invited him to my tiny apartment. He thought it was sweet, impressed that I paid my own way. “Just one thing,” he said. “Get nicer towels.” He left a green toothbrush by my sink. I stared at it for an hour – could I handle it?

A week later, I was stunned to walk into his parents’ house to find it filled with toasters, decanters, overturned tables, a human-sized pile of junk mail. But Jon had no shame; instead he gave me a tour, cracking jokes about the 60-person place settings, detached and confident. At a fridge full of frozen kosher turkeys, my heart beating wildly, I let out the secret I’d been keeping for 30 years: “My mother’s a hoarder too. Her house is even worse.”

When Jon invited me to move into his Victorian conversion in West London, I panicked. He’d said he loved me, but I was scared. How could I – who had worked so hard to create my own walls – share them? I felt ready to merge my life, but my home? In his habitat? Jon’s neat abode was spacious but filled with mismatched family heirlooms in masculine blues and blacks. His door knocker, sigh, was a fat bronze cow.

My neighborhood, however, had become gentrified, peopled with twenty-something hipsters. I’d outgrown it. And my address.

We used one of his mother’s hoarded Volvos to move my stash. I made myself at home and unpacked. Which is when I saw it. “What is this?” I screamed.

Jon came running to the bedroom. I pointed in revulsion at the thick stack of papers.

“Tickets to every gig I’ve ever been to,” Jon said quietly. “I love music.”

I pointed to another drawer. Paper bags. And another one. Old empty boxes. I felt nauseous. I wanted to bolt. I’d thought we had no secrets. But Jon had hoarding tendencies.

He saw me go white. “Don’t worry,” he said. “I don’t need this.” He immediately began emptying a drawer into the trash.

I sighed with relief. I’d traveled across the world to find a relationship that was familiar, like the one I grew up in. But, I thought as I watched him dispose of fancy bags, one I could finally have some control over.

We respected each other’s space, knowing our baggage impacted those around us. Jon arranged to build shelves for my exposed piles, and gave me my own corner of the office. I had room to breathe.

Soon after our wedding, we moved to NYC, where we were both far from family houses. We bought an open-plan apartment in Chelsea. I was enthralled by the prospect of designing a permanent place. I wanted to buy the smallest number of furniture pieces possible (who really needs coffee tables?) and keep our shelves half-empty. My husband, however, picked out a colorful red-and-orange tile pattern for the kitchen surfaces. I freaked out. “Only. White.”

“Don’t have a backlash with your backsplash,” he said. “Calm down.”

Hearing his British accent echo, I realized I was going too far to the opposite extreme of my childhood home, being selfish about our shared sphere. “We can add some hue,” I conceded. I passed the packed box that had a few leftover red-and-purple kippahs from our wedding. Some treasures needed to be kept.

Jon and I developed our domestic system of stuff. We only purchased major items that we both loved, creating an aesthetic from the overlaps in our tastes. I did not go through his cupboards, but placed excess floor-piled junk into his “man cave” closet, for which he called me “the hoarding police.” Introducing new pieces into our household meant old ones were jettisoned, including plastic bags. The curtains on our large living-room windows always remained undrawn – we had nothing to hide.

But motherhood scared me. I feared passing on the dysfunctional dynamics I had with my mother, as well as her hoarding genes. I needed to be a role model despite my failures and anxieties. I would have to manage all this new stuff. I was turning my office into the nursery – would I still have an identity? Where were my walls?

“I guess it’s not a great time to give you this,” Jon said, standing in the middle of our office, holding out a large stuffed octopus made of recycled vintage T-shirts. Jon touched my belly. “Shopping for her is fun,” he said. I saw a smiling father-to-be who wanted to be involved, make contact, prepare himself. I saw my incredible fortune.

Intimacy wasn’t about control. Life was messy. Though uncomfortable, it was part of motherhood. I’d needed Jon to help me make my dream home; a bit of clutter was a fair price for closeness.

A bit. I put the organic cuddly on a white open shelf I’d had installed. It stared out, reminding me that I would create the feeling of home that my daughter would have for a lifetime. As mom, I’d have the power to create boundaries, to clean up. I could help make this girl – who was growing in my interior – comfortable in her own skin.