In the wake of "Blackfish's" revelations, a SeaWorld float is challenged 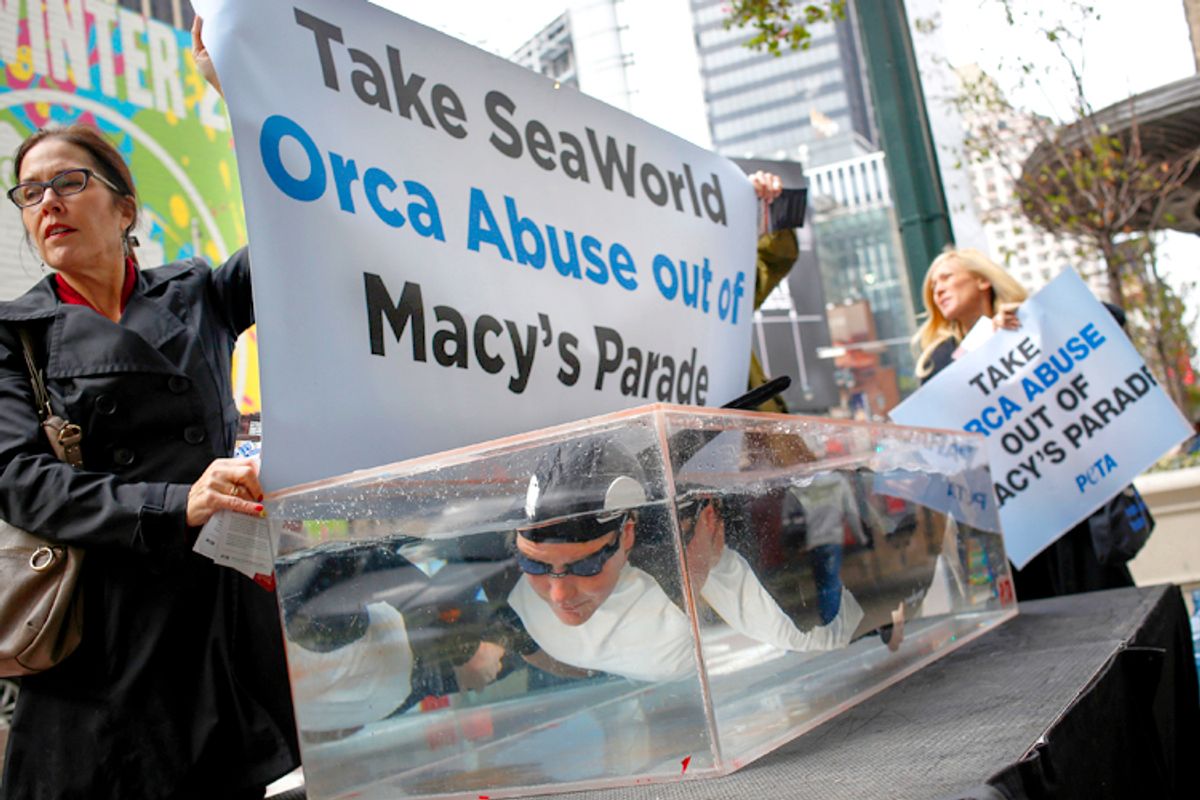 PETA activists demonstrate outside the Macy's Herald Square store protesting the plan for SeaWorld to have a float at the Macy's Thanksgiving Day Parade, October 23, 2013 (Reuters/Shannon Stapleton)
--

As a general rule of thumb, if PETA and Alec Baldwin – two great American institutions of exploitation and hypocrisy -- are in a froth over something, it's perfectly acceptable to roll your eyes and ignore it. But as the Macy's Thanksgiving Day Parade approaches, the animal rights organization and the recently suspended MSNBC host aren't the only ones questioning whether one of the event's biggest attractions belongs there.

At issue is the parade's SeaWorld "A Sea of Surprises" float, featuring images of a variety of colorful marine plants and animals, and topped with a life-size killer whale depicted in glorious mid-breach. But the cheerful vision of SeaWorld as a magical place where activities like a "Dine with Shamu" experience are somehow "helping to care for the world we share" has been severely challenged of late, thanks in large part to the stunning, eminently persuasive documentary "Blackfish." Stretching back decades to explore the circumstances surrounding the 2010 death of SeaWorld trainer Dawn Brancheau, "Blackfish" offers sobering accounts from several former SeaWorld workers themselves to challenge the franchise's true relationship with what it calls "these magnificent rulers of the sea."

Since the film's release this summer and its airing earlier this month on CNN, SeaWorld's stocks have plummeted, down 25 percent from earlier this year. So it's likely SeaWorld must be thrilled for the opportunity to show itself in a considerably more favorable light to millions of television viewers. But that presence isn't going unchallenged. In a letter to Macy's CEO Terry Lundgren, Alec and Hilaria Baldwin called SeaWorld " a cruel prison for whales" and urged the retailer, "Don't be a part of SeaWorld's crisis-management plan." And with online petitions against SeaWorld's presence at the parade circulating, PETA planning to line the parade route with protesters, and groups like the filmmakers behind the documentary "The Cove" speaking out, that "Sea of Surprises" trip down through midtown Manhattan may be a less than pleasant one.

The killer whale flap is the second controversy this year for Macy's venerable Turkey Day tradition. Earlier this month, a trade group for ranchers in South Dakota successfully lobbied against the placement of rock legend and vegetarian Joan Jett on its state's float. Jett has been an outspoken advocate for PETA this holiday season, encouraging fans to call Butterball to tell them, "There is no appropriate way to cook a tortured bird."

As South Dakota Cattlemen's Association representative Jodie Anderson explained last week to CNN affiliate KEVN, "Of course, when we learned that about Miss Jett, we were rightly concerned about her representing South Dakota and a state that is so heavily reliant on agriculture and livestock production to drive our economy." Jett, who says that "People's political agendas were getting in the way of what should be a purely entertainment driven event," will now appear on a different float.

Earlier this month, Macy's parade spokesman Orlando Veras told the Associated Press that "The Parade has never taken on, promoted or otherwise engaged in social commentary, political debate, or other forms of advocacy, no matter how worthy. Macy’s intention is only to provide a range of entertaining elements and performers free of endorsements or agendas" and vowed it "will remain steadfast in following the guiding core of a decades old mission, celebration and entertainment for all." But how can rolling a giant float through the streets of New York City not be an "endorsement"? Why is it assumed that only the people opposed to a state's industries or a company's practices are the ones with an "agenda"? If all goes according to Macy's and SeaWorld's plan, on Thursday, the world with see a big fake orca glide serenely toward Herald Square. Hundreds of miles away, Tilikum, the whale who killed Dawn Brancheau, will meanwhile likely spend the day as he does all his days now – in listless isolation in a theme park tank.