How the corporate Grinch stole Thanksgiving!

While the right grouses about a "War on Christmas," corporations have their own version: Starting with Black Friday 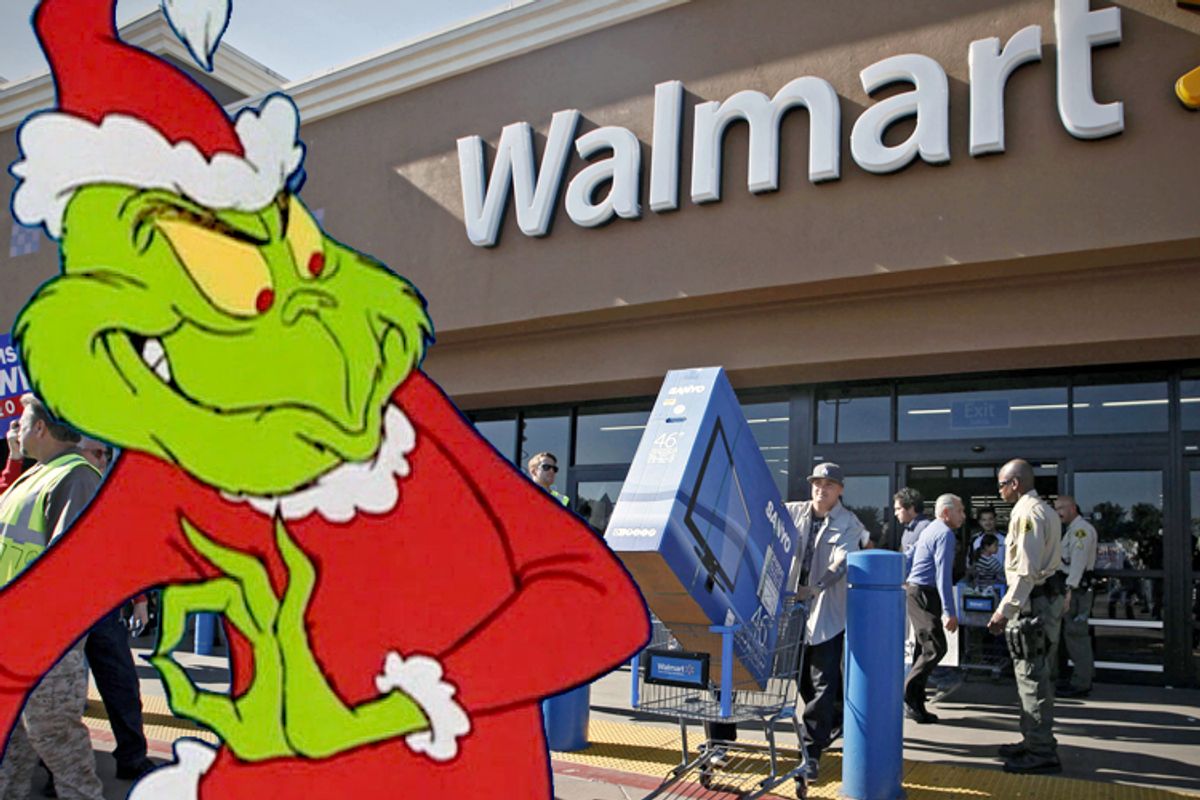 To the chagrin of some employees -- and political, labor and religious allies – major retailers will kick off Black Friday even earlier this week on Thursday, compelling workers to face down throngs of shoppers rather than sharing the holiday with their families.

“These poor workers, who have to put up with all this crap, now not only have to deal with that stuff, but also have to deal with the tensions and pressures of getting out of Thanksgiving Day with their families, or planning around Thanksgiving Day with their families,” said Ohio state Rep. Mike Foley, who plans to introduce a bill requiring retailers to pay triple wages for any hours worked on Thanksgiving, or allow them to take that day off without penalties. “Can we not get one day, one day,” asked Foley, “where we don’t have to worry about the consumeristic culture beating its heat down our throats?”

Noting deals or store openings as early as 6 p.m. Thursday at Wal-Mart, Best Buy and Kmart, and 8 p.m. at Target, Sears, Macy’s, Kohl’s and J.C. Penney, USA Today reported that “a kind of arms race has developed among retailers, and stores have opened their doors earlier and earlier each Friday.”

Foley said that trend was “just absolutely obscene … It says a lot about them. It says a lot about whatever brand of capitalism we now practice in this country.” While acknowledging that his proposed bill would stand little chance in Ohio’s GOP House, he told Salon, “I’ve gotten more comment on this bill idea than I think anything else I’ve ever proffered, because people are angry about it. It’s kind of like, is nothing sacred?”

“A lot of the workers, they don’t want to really work Thanksgiving, but a lot of them are actually forced to …” said Tampa Wal-Mart employee Jaime Martinez, who joined a Monday strike by the labor group OUR Wal-Mart. “If they don’t show up, they can get wrote up.” Martinez said he’ll have to leave his girlfriend’s family’s Thanksgiving observance quickly in order to make it to Wal-Mart for his 10 p.m. shift. “I prefer not to,” he told Salon, “but I’m afraid that I can end up losing my job.” Martinez, a 15-year employee, said he didn’t know how many years it had been since he had Thanksgiving off. “I really want to spend time with my family,” he added.

A spokesperson for Target declined to comment on how employees would be impacted by the early start of Black Friday. Best Buy referred Salon to a statement that said that "much of the internal feedback we have gotten so far reflects our collective desire to serve customers and have a successful holiday" and "All affected hourly store employees will, of course, receive holiday pay." Wal-Mart did not immediately respond to a Monday afternoon inquiry; in an email to reporters last week, Wal-Mart vice president David Tovar noted that “associates will be paid for the hours they work plus holiday pay.”

But Rep. Foley charged that Wal-Mart, the world’s largest private employer, bears “a huge responsibility” for driving down standards in the industry. Given workers’ reliance on public assistance, he told Salon, “we are subsidizing Wal-Mart to basically pay their employees crappy wages” and “their greedy instinct as a corporation to control as much market share as possible, make as much money as possible, and pay their employees [the] least amount possible is part and parcel of, you know, the sickness that I think we’re seeing with this Thanksgiving Day opening.”

That critique was echoed by Kim Bobo, the longtime director of the Chicago-based Interfaith Worker Justice. “Workers are being forced to leave their families,” Bobo told Salon. She suggested Black Friday’s creeping into Thanksgiving was “symbolic of the challenges and problems around Wal-Mart right now,” as the retailer’s executives forge industry-wide standards, and “have made some choices that they did not have to make, that are really value choices.” Bobo added, “People are concerned that this is just another trend toward consumerism trumps everything else.” In contrast to the understandable need for hospitals to maintain staffing on holidays, she said, “We could stop shopping for one day.”

While public attention to workers compelled to work on holidays may be a more recent development, right-wing outrage over retailers’ supposed “War on Christmas” – consisting of allegedly insufficient references to the holiday – has become a mainstay of the season. This month the American Family Association released its 2013 guide to top companies’ Christmas-friendliness; Wal-Mart was listed as “For ‘Christmas,’” Radio Shack as “AGAINST ‘Christmas’.” Asked how that issue compares to the question of workers’ ability to stay home for the holidays, Bobo noted, “In the Bible, it talks about that, you know, not everyone who cries, ‘Lord, Lord’ will enter the Kingdom of Heaven.” She told Salon, “It does seem odd to me that how you lift up using the words ‘Christmas’ around shopping, that that in any way could be considered a value,” given Christian concerns that the holiday has been excessively commercialized. “Christ-like values,” argued Bobo, should have more to do with how companies treat their employees. When they’re linked instead to “the number of times that your shopping ad talked about Christmas,” she suggested,  “seems to me that we’ve missed the boat.”