America's next big rip-off: Cars are the next subprime crisis!

With financial firms now pushing strongly into auto loans, here's how Congress is helping car dealers rip you off 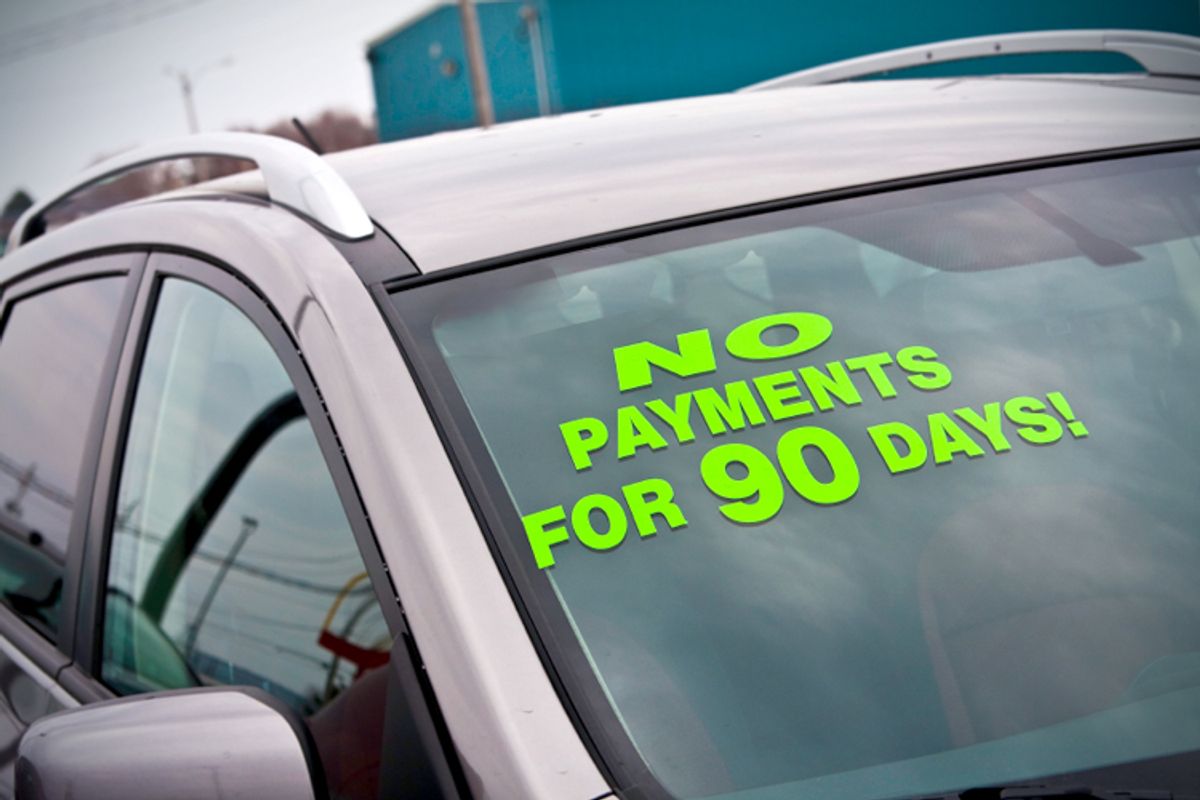 If you have bad credit in America, you will have lots of trouble buying a house, securing a credit card or even getting a job. But it apparently won’t stop you from one very expensive but common purchase: buying a car. And now this may augur some serious problems.

Subprime auto loans – given to people with credit scores of less than 680 – account for 27 percent of all loans for new vehicles in 2013, according to analyst Experian Automotive. That’s well above pre-recession levels. Financial firms have pushed strongly into auto loans of late, and are increasingly willing to fund subprime borrowers. This year, banks even sold $17.2 billion in auto loan-backed securities, which are bonds similar to the mortgage-backed securities that accelerated the housing bubble.

In many parts of the country without viable mass transit options, Americans need cars for transportation to jobs or schooling. And surging car sales, now at their highest pace since 2007, helps the broader economy. So an increase in auto loans isn’t necessarily bad. But when all the growth in lending comes from subprime borrowers, who are vulnerable to greedy financiers by virtue of their sheer desperation, experts get nervous.

“The question is whether it’s predatory, and where you draw the line,” says Stuart Rossman, director of litigation for the National Consumer Law Center. His organization and others have found multiple ways in which auto dealers scam subprime borrowers, forcing them into higher interest rates and longer-term loans. Auto dealers, the middlemen between a consumer with bad credit and the financing for the vehicle, have outsize power to set terms and extract profits. And though the Consumer Financial Protection Bureau is supposed to protect Americans from this kind of mistreatment, there’s a catch: Congress carved out an exemption from CFPB regulation for auto dealers, putting their oversight in the hands of the notoriously sclerotic Federal Trade Commission. As a result, just as water inevitably rolls downstream, big money has flooded into auto loans, the financial transactions with the fewest eyes on them.

Dealers obtained this power through a combination of bad regulatory decisions and rising political influence. Decades ago, each major auto company had its own dedicated financing arm; Ford dealers would have to use Ford Credit, GM dealers would use GMAC. The Justice Department’s anti-trust division, in an attempt to drive competition, ruled in the 1960s that automakers could no longer tie financing to the sale of the car. But this gave lots of leverage to auto dealers, who could now pick and choose whom they used to finance their loans. “They shop for the financing company that gives them the best markup,” Stuart Rossman told Salon.

The “markup” refers to the additional points a dealer adds to the interest rate, as compensation for matching the borrower with a lender. This markup is both completely at the dealer’s discretion, and hidden from the borrower. When an auto dealer tells you, “I can get you a loan at 10 percent,” he is not required by law to inform you how much of that reflects the actual cost of financing and how much comprises the markup. In the mid-1970s, the Federal Reserve ruled that dealers could satisfy the Truth in Lending Act merely by quoting the final interest rate to consumers, not the component parts. “They said consumers would be confused,” Rossman said. “But if I knew my dealer was charging me an extra 3 points, I would not be confused about my response.”

Dealers use this opaque system to their advantage, saving their biggest markups for subprime borrowers, who may not otherwise be able to secure credit. They have also elongated the length of auto loans to as much as seven years, which lowers the monthly payment but costs much more in interest – and increases the dealer markup, which gets calculated as a portion of the interest rate. Dealers don’t care whether the borrower can ultimately pay back the loan, because the finance company pays out their markup immediately. The higher interest rates have led to increased defaults on auto loans, years into the recovery.

While dealers claim the markup merely reflects reasonable compensation for bringing in loans, consumer groups believe the system creates an incentive for higher borrowing costs. “The concern is that, instead of basing the interest rate on the risk the person presents, you have somebody else with no skin in the game getting involved for profit,” said Chris Kukla, senior vice president at the Center for Responsible Lending. A 2009 CRL report showed that consumers financing cars through a dealership will pay $25.8 billion in interest rate markups over the life of the loan.

Kukla described a popular practice known as the “yo-yo” scam. Auto dealers sell the consumer a car, then call them back a week later and claim they cannot find financing at the agreed-upon interest rate. “We’ve seen many cases where the person gets called back and presented with a higher interest rate,” Kukla told Salon. The dealers basically trap borrowers, telling them they cannot refund their down payments, that they already sold their trade-in vehicles, or that they owe a rental fee for using the car in that interim period. Kukla says these incidents increase for borrowers with lower incomes and credit scores, easy marks who expect their lending to fall through and don’t suspect a dealer scam.

Congress prevented CFPB from regulating auto dealers because of an amendment to the Dodd-Frank law authored by Rep. John Campbell, R-Calif., himself the former CEO of three auto dealerships in Orange County, who still makes millions renting out properties to used car dealers.  Beyond actual plants in Congress, the political power of auto dealers, wealthy constituents who have a presence in nearly every congressional district, cannot be ignored.

But despite this freeze-out, CFPB has not stopped trying to protect consumers from price-gouging on auto loans. While they cannot regulate dealers, they can regulate any financial company with over $10 billion in assets. They’ve used this indirect power to try to get the financers to police the dealers.

In March, CFPB released a bulletin to auto lenders, warning them that they would be held accountable for discriminatory pricing. Studies find a close correlation between heavy markups on auto loans and race. African-American and Hispanic borrowers encounter higher rates for auto loans than whites, with some increases of over 300 percent. Under the Equal Credit Opportunity Act, CFPB can penalize lenders for discriminatory lending practices on the basis of race, color, religion, national origin, sex, marital status and age. At an auto lending forum earlier this month, CFPB director Richard Cordray said, “We have a clear duty to address any discriminatory practices that result from the loan programs established by auto lenders, whether they are lending directly to consumers or instead are lending indirectly through intermediaries,” aka dealers. This has had early success: Large banks have written to dealers to warn them about discriminating against customers on any loans they finance. “The money is put on the table by the lenders, not the dealers,” said Stuart Rossman of the NCLC. “By controlling the spigot, CFPB can avoid having a mess on the floor.”

While indirect policing shows promise, the lack of transparency creates challenges. It’s hard to get information about the size of dealer markups, as well as demographic statistics. (CFPB uses data from the Census Bureau and the Social Security Administration.) In addition, using fair lending laws to enforce markups could lead to dealers spreading them out to everyone. Moreover, the competition for the auto lending market – outstanding auto loans total $783 billion, making it the third-largest source of household debt – makes it difficult to stop the markup scam. Once you stop one lender, another can pop up.

For example, CFPB has floated the idea of flat fees for auto dealers, instead of discretionary markups. But you would need to enforce that across all lenders. Stuart Rossman explained that in the early 1990s, Nissan created the “Customer First Program,” mandating a flat fee on dealer markups, which meant cheaper financing for borrowers. “Within six months they lost 60 percent of their business,” Rossman said. “Why would a dealer accept a flat fee when Acme Finance wouldn’t put any limits on them?”

In order to get sector-wide enforcement on markups, lawmakers and advocates want Congress to close the loophole, and allow CFPB to monitor auto dealers directly. Sen. Elizabeth Warren questioned CFPB director Cordray about this earlier this month, and Cordray demurred, saying “the law we have is the law we’re working with,” and vowing to focus regulation on auto lenders, where they have explicit responsibilities. Warren replied, “It makes no sense to me that there should be any exception here for consumers who are being tricked out of billions of dollars every year on car loans.”

CFPB clearly wants to minimize abusive practices in this critical area of financial transactions. But without standardized conduct for auto dealers, as CRL’s Chris Kukla says, “Anyone walking into a dealership can get hit with an unjustified expense without even knowing it.”