GoldieBlox backs off the Beasties -- badly

The toy company calls for a truce, but still gets a lot wrong 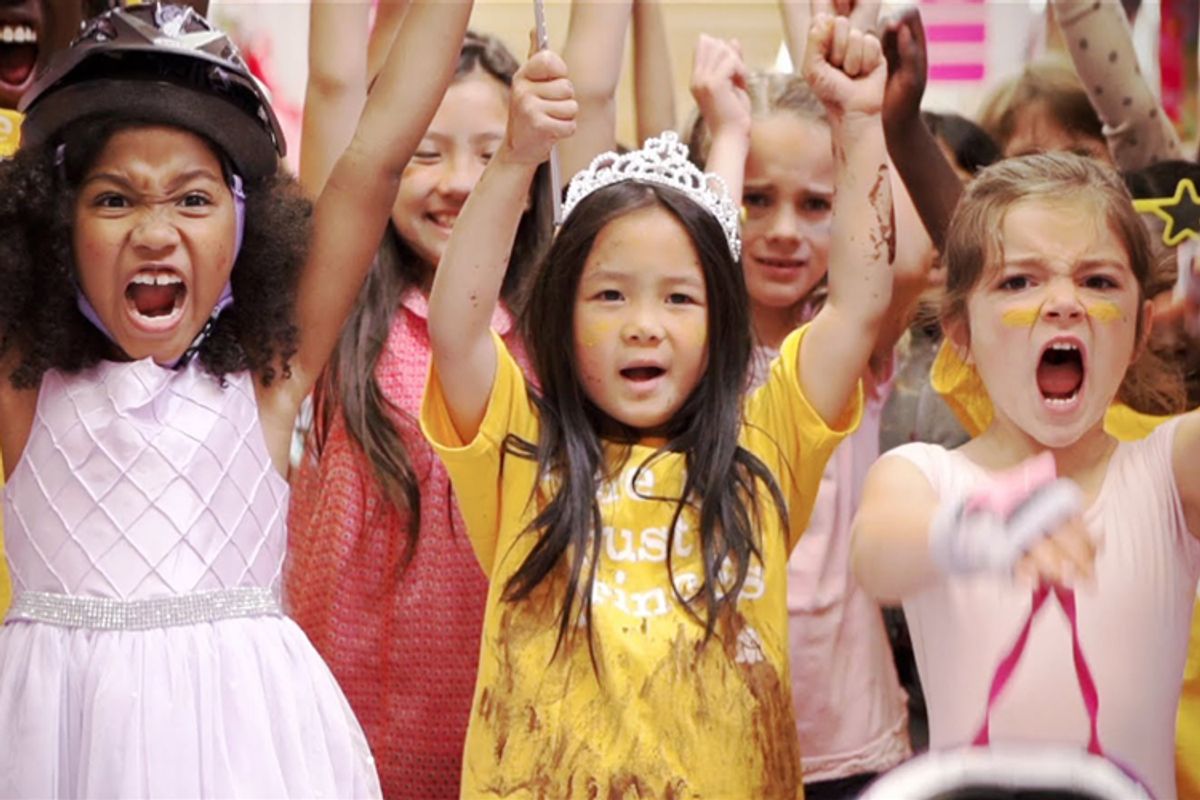 Hey, GoldieBlox ladies, I'm callin' out to ya! Thanks, kind of, for your halfhearted, passive-aggressive fence mending there!

The start-up toy company went viral with its cute, paradigm- and furniture-smashing Rube Goldberg video earlier this month. But it found itself on the receiving end of some seriously negative publicity this week when representatives for the Beastie Boys complained about the presence of a reworded version of its iconic hit "Girls" in its ad. At issue wasn't so much the reappropriation of the original command for girls to "do the dishes, to clean up my room, to do the laundry" into an invitation to "build the spaceships, to code the new apps, to grow up knowing that they can engineer that!" but the Beasties' insistence that "we made a conscious decision not to permit our music and/or name to be used in product ads" -- a choice that made headlines last year after the death of band member Adam Yauch.

Though representatives for the band said "There was no complaint filed, no demand letter (no demand, for that matter)" and that "we tried to simply ask how and why our song ‘Girls’ had been used in your ad without our permission," GoldieBlox responded aggressively, filing paperwork in California seeking "a declaratory judgment holding that its parody video does not infringe any copyrights held by Defendants and is protected by the Fair Use Doctrine." It was a bold, preemptive strike on the part of GoldieBlox, one that seemed to definitively declare the company felt entitled to the Beastie Boys' music. Copyright infringement is so empowering.

But on Wednesday, GoldieBlox reversed itself, in an open letter familiarly addressed to remaining Beastie Boys "Adam and Mike." Saying, "We don’t want to fight with you. We love you and we are actually huge fans," the letter goes on to explain, "When we made our parody version of your song 'Girls' we did it with the best of intentions. We wanted to take a song we weren’t too proud of, and transform it into a powerful anthem for girls…. Our hearts sank last week when your lawyers called us with threats that we took very seriously. As a small company, we had no choice but to stand up for ourselves…. We want you to know that when we posted the video, we were completely unaware that the late, great Adam Yauch had requested in his will that the Beastie Boys songs never be used in advertising. Although we believe our parody video falls under fair use, we would like to respect his wishes and yours. We did so sincerely hoping we could come to a peaceful settlement with you. Since actions speak louder than words, we have already removed the song from our video. In addition, we are ready to stop the lawsuit as long as this means we will no longer be under threat from your legal team. We don’t want to spend our time fighting legal battles. We want to inspire the next generation. We want to be good role models. And we want to be your friends."

It's a positive gesture, but wow, that is one crappy letter from "Debbie + Team GoldieBlox." It begins with the conciliatory message that "We are actually huge fans" – something you might not get from that demand for a jury trial in which they dismiss "the highly sexist song" and state, "In the lyrics of the Beastie Boys’ song entitled Girls, girls are limited (at best) to household chores, and are presented as useful only to the extent they fulfill the wishes of the male subjects." Nothing like a declaration of intention to take "direct aim at the song" and create a work "exactly the opposite of the message of the original" to say, "I'm your huge fan." Then again, how "huge" a fan can you be when you're apparently unaware of the last wishes of one of the band members, who died just last year? Because, truly, I'd think if you loved a band and wanted to use its music to peddle your merchandise, you'd at least Google that first. So either GoldieBlox knew that they wouldn't get permission for the song and went ahead and used it anyway, or it ignorantly didn't consider the ramifications of using someone else's creative work in their advertising. Arrogant or stupid, take your pick. In light of its mistake, GoldieBlox asserts that the company simply had "no choice" but to "stand up for" itself after being contacted by the Beastie Boys, as if using someone else's song without permission to sell toys somehow made them the victims of bullying. (GoldieBlox, by the way, has also made advertising hay with Queen's "We Are the Champions," reportedly without that band's apparent permission either.)

The whole fiasco is a particularly huge disappointment for those of us who were briefly excited at the thought of a company that would take on the very real and rampant problems of sexism in both toy marketing and in the tech world our sons and daughters will someday be going out into. An endeavor that its founder Debbie Sterling said of a year ago, "I have spent my entire life savings and I have pulled in every favor to make this happen…. Any girl you know is so much more than just a princess."  You know how many of us had been rooting for that? Maybe it doesn't matter to GoldieBlox, which thanks to all the attention currently has one of the top-selling toys on Amazon. But you don't create positive change in the world by cavalierly stepping all over the hard work of others.

Most gallingly of all, after lawyering up all over the band just two days ago, GoldieBlox ends its letter with a "Let's be friends" message. What, no self-absolving smiley thrown in for good measure? If I were the Beastie Boys, I'd tell you to go ahead and hold your breath on that one, GoldieBlox. And I'd say that if you really want to "inspire the next generation" and "be good role models," you would own up to your mistakes and apologize for them.