Homophobia hoax? Bullying note to waitress went viral, but it might be fake 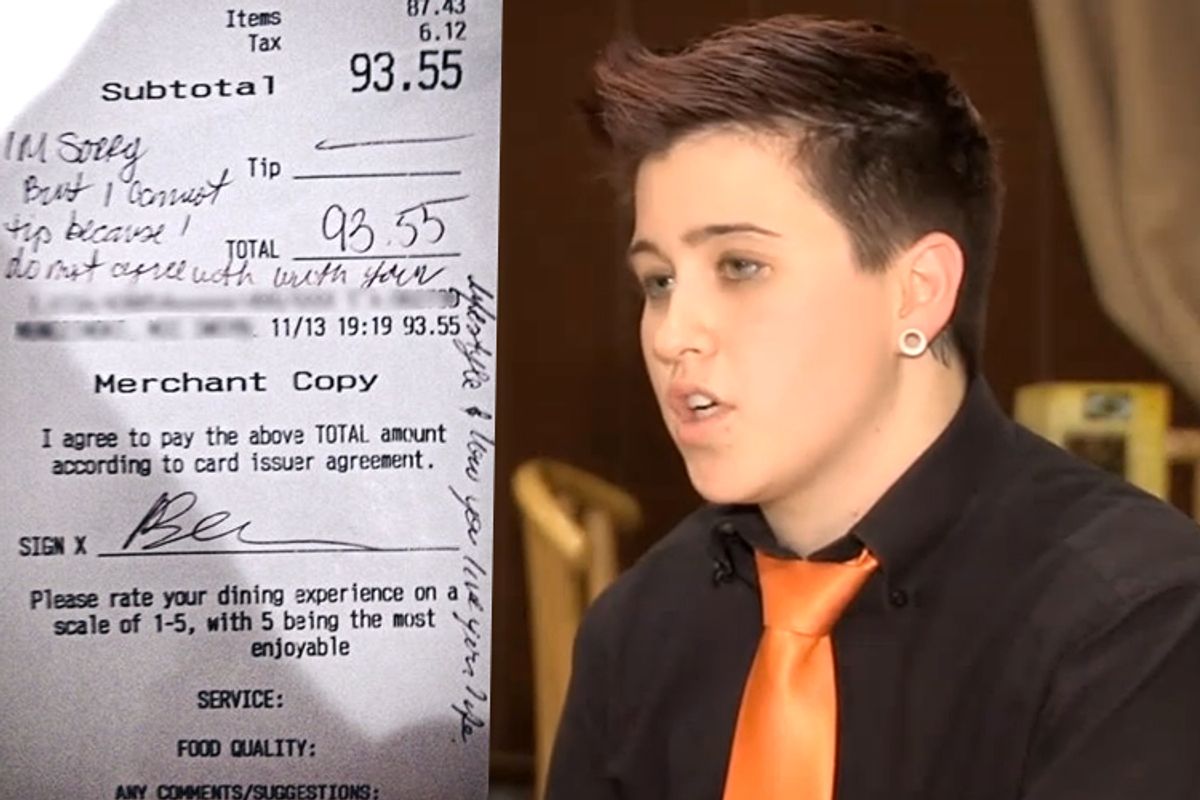 How much outrage can one story about a little restaurant receipt inspire? Well, throw in the words "homophobia" and "possible hoax" and let's find out.

Earlier this month, New Jersey waitress Dayna Morales attained instant Internet fame after she sent Facebook's "Have a Gay Day" page a photo of a message she claimed she received on a patron's receipt. It read, "I'm sorry but I cannot tip because I don't agree with your lifestyle & how you live your life." Morales further claimed that she'd gotten off to a bumpy start with the couple and their children when they looked her over and allegedly told her, "Oh I thought you were gonna say your name is Dan. You sure surprised us!"

In an email to Have a Gay Day, the former Marine wrote, "NEVER in a million years did I think this would happen. I am THOROUGHLY offended mad pissed off and hurt that THIS is what her kids will grow up learning and that I served in the Marines to keep ignorant people like them free. Sorry lady but I don't agree with YOUR lifestyle and the way you're raising your kids but you didn't see me throwing that in your face and giving you shitty service. Keep your damn mouth shut and pray we never cross paths again." After the post created a sensation, Morales further commented on Facebook, "Thanks everyone for your support. It took every fiber of my being not to spit in their food and say something. (Not gonna lie if kids weren't there it would of been a totally different story)."

Morales' story triggered an outpouring of strong, sympathetic reactions about the "appalling" and "stupid" family -- and a deluge of donations. A few days ago, she said she was going to give a portion of her new earnings to the Wounded Warriors Project. "It's great to see everybody's support and I'm thankful for it," she told NBC New York, "but it doesn't excuse or change the fact that it actually did happen."

The story had echoes of similar recent alleged incidents of terrible customers. In October, a Christian couple in Kansas City reportedly left a message for their server that read, "Thank you for your service, it was excellent. That being said, we cannot in good conscience tip you, for your homosexual lifestyle is an affront to GOD. Queers do not share in the wealth of GOD, and you will not share in ours. We hope you will see the tip your fag choices made you lose out on, and plan accordingly." Then a Tennessee Red Lobster waitress posted a photo on Facebook of a receipt with no tip and a racist slur scrawled on it. The waitress, Toni Christina Jenkins, soon amassed over $10,000 in donations from around the world – while the patron Devin Barnes, whose personal information was revealed in the photo, found himself on the receiving end of harassment and death threats, and had to hastily change all of his banking and credit card information. Barnes then hired a handwriting analyst who affirmed the writing matched neither him nor his wife. He is currently planning on suing the restaurant and Jenkins.

And then, earlier this week, Morales' story took a twist -- when the family she said stiffed her contacted NBC News to dispute her claim. The husband and wife produced their copy of the receipt, which showed an $18 tip, and what they say is their Visa statement, which likewise reflects the larger total. They also say the alleged snarking on Morales' appearance went down differently – they say they'd been told their server would be "Dan," and when Morales appeared, they said, "Whoa, you're not Dan." The husband told NBC he didn't even vote for Chris Christie because Christie doesn't support marriage equality. "Never would a message like that come from us," he says.

The restaurant now says it is "investigating" the situation. Meanwhile, individuals claiming to know Morales say that she has a history of making things up, "telling co-workers she shaved her head because she had brain cancer and later telling them it was her friend who had brain cancer." And the online community that was eager to hand her money a week ago has now turned on her. The Huffington Post story currently has close to 5,000 comments, many of which will make you immediately want to go out and get day drunk, while the Daily News readers now have her pegged as "a disgrace to the uniform. Nothing but a petty liar."

For now, all that's certain is that somebody isn't telling the truth, and an $18 tip has now become the linchpin of an international story that raked in thousands of dollars in donations. And the most insightful, accurate response to the whole thing so far has got to be from the CNN commenter who simply noted, "Moral of the story? Pay CASH."