The destructive legacy of the first Thanksgiving: How Europeans hurt the American diet 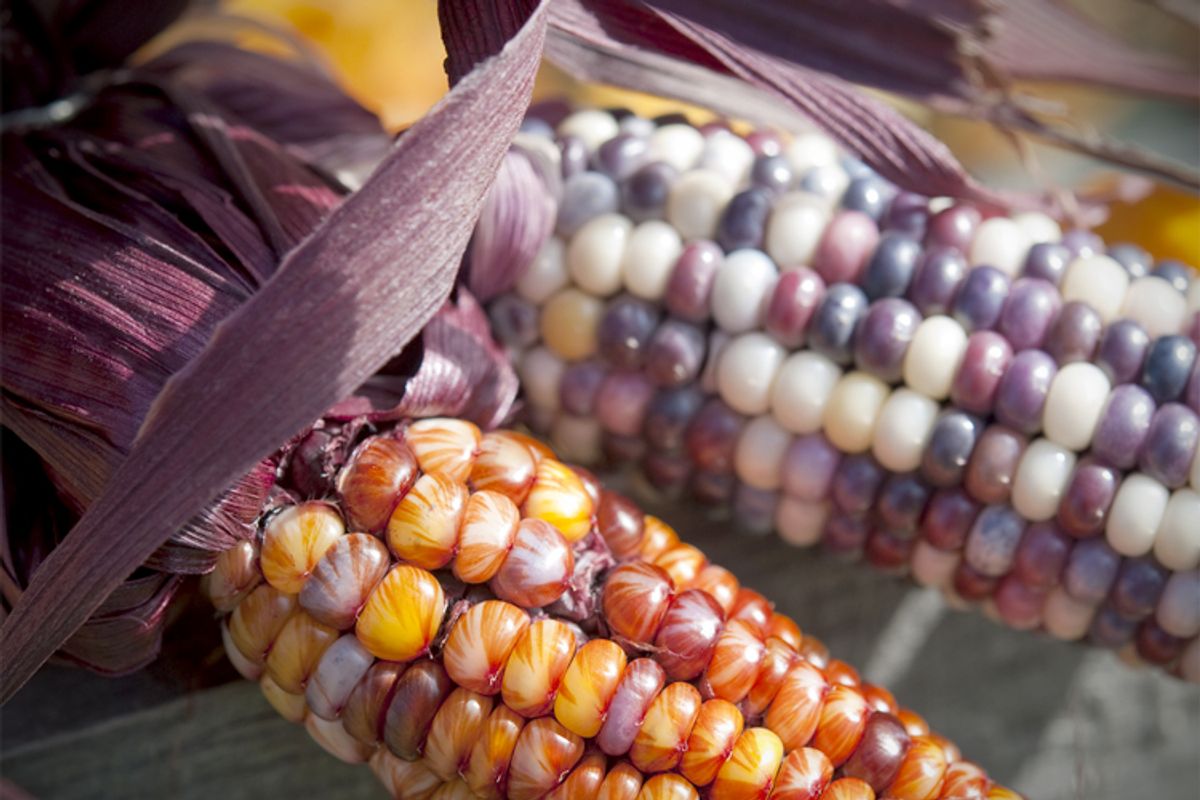 Every November, media outlets try to get to the bottom of the unsolved mystery that is the menu of 1621’s first Thanksgiving. Speculation about the meal abounds: It’s known that William Bradford ordered four men to go on a “fowling mission,” but we can only make guesses about the species they brought to the table.  Smithsonian reports that the Pilgrims may have picked off a few of the passenger pigeons that filled New England’s skies, and History.com lists swans, ducks and geese as likely protein choices for the colonists’ feast, alongside the fish and shellfish they may have harvested.

The gastronomical stars of the first Thanksgiving were the crops harvested that autumn. In “Mayflower: A Story of Courage, Community, and War,” Nathaniel Philbrick describes the meal as a harvest festival turned “overwhelmingly Native celebration” after the arrival of Massasoit and a hundred Pokanokets, who provided five freshly killed deer.

The cheerful story of fellowship between Pilgrims and Indians is one of the historical tales that elementary school teachers work into lesson plans before any others, laid down like a festive placemat onto which kindergartners’ understanding of the American cooperative spirit can be set. The story goes that the helpful Indians showed the disoriented colonists how to plant crops, preventing starvation in the brand-new Plymouth colony. According to Philbrick, after bringing the Mayflower to shore during an exploring expedition, Myles Standish and his men found approximately 14 bushels of buried flint corn. “If their European grains refused to grow in this new environment, their very survival might depend on having planted a significant amount of American corn,” Philbrick writes. “They decided they had no choice but to take the corn.” The stolen corn -- found buried with skeletons and sundry items -- became part of the Pilgrims' first planting.

Over the next several centuries, the settlers made the foreign crops their own. Today, the flint corn the Pilgrims brought to the first Thanksgiving is known to many as “ornamental corn,” its dietary importance having been eclipsed by higher-yield varieties. According to GMO Compass, in 2010, 86 percent of the total cultivation area of corn in the U.S. was genetically modified.

This Thanksgiving Day is also the last day of Native American Heritage Month, and gatherings nationwide will memorialize a meal that prefaced the destruction of indigenous food systems in North America by those struggling newcomers. While many American tables will be decorated with the “Indian corn” that comes out of its holiday storage space to provide a festive touch, across the country, a growing number of Native people are working to “decolonize” their diets.

There's ample historical reason for this, as the introduction of European food to Native populations has compromised those populations' health. Swine and apple trees allowed early European settlers to transpose familiar agrarian scenes onto New World landscapes, but the European diet didn't agree with the residents of North America. In colonial New England in 1634, William Wood observed that when the Massachusett people changed “their bare Indian commons for the plenty of England’s fuller diet, it is so contrary to their stomachs that death or a desperate sickness immediately accrues, which makes so few of them desirous to see England."

As the Euro-American population grew, vast tracts of land were needed to raise livestock and grow crops. These land interests disrupted indigenous cultivation and gathering places, and Native peoples were ushered onto reservations, sometimes far from their homelands, preventing acquisition of traditional foods. The federal government’s assimilation policies included a push toward farming, but these lands were often barren, education in agricultural methods was lacking, and the government failed to provide adequate financial support. To stave off starvation, during the mid-1800s, the government offered rations, including beef, salt pork, wheat flour and refined sugar. North American indigenous foods were excluded from the program in order to facilitate the assimilation process.

Today, the USDA provides food to low-income reservation households through the Food Distribution Program on Indian Reservations. Participants can choose the contents of their monthly package: Available “commodity foods” include frozen and canned meats, canned fruits and vegetables, pasta, cereal, cheese, evaporated milk, wheat flour, crackers, beans and peanut butter. Fortunately, on most reservations, fresh fruits and vegetables are available to those who want them.

The reliance on government provisions led to widespread health problems in Indian Country.  The Department of Health and Human Services reports that American Indian and Alaska Natives are more than twice as likely as non-Hispanic whites of a similar age to have diabetes. Blocks of commodity cheese took up residence in many reservation kitchens, and many indigenous North American bodies suffered as a result. According to a 2010 article in BMC Evolutionary Biology, lactase persistence (the ability of adult humans to digest the milk sugar lactose) “is common in people of European ancestry as well as some African, Middle Eastern and Southern Asian groups, but is rare or absent elsewhere in the world,” with 65 percent of people worldwide unable to digest lactose after weaning. In 1977, researchers found that lactase deficiency was present in 66 percent of their American Indian subjects and correlated with the degree of Indian ancestry, leading them to conclude that lactase deficiency is a common trait in the American Indian adult population. The associated gut distress can lead to vitamin malabsorption and can even contribute to malnutrition.

Since the time of contact with Europeans, indigenous communities in North America have worked to continue the food practices that have been embedded in tribal knowledge systems for thousands of years. My nation, the Cowlitz Indian Tribe, is located in the Pacific Northwest, where ongoing ancestral food acquisition activities include traditional deer and elk hunting, salmon fishing, huckleberry picking, and digging of camas and other roots. First foods ceremonies celebrate the appearance of first roots, first salmon and first berries, showing appreciation for the plants’ and animals’ return. In recent years, Columbia River First Salmon Ceremonies — and overall tribal fishing of the river — have sometimes suffered from a scarcity of salmon, resulting in large part from river damming that flooded ancestral fishing sites.

Many American Indians have left their ancestral homes, a trend due largely to a federal relocation program that encouraged reservation Indians to move to cities. For those who have lost access to their ancestral hunting, fishing or gathering places, online communities have facilitated an indigenous eating resurgence. At Decolonize Your Diet and the Facebook page that accompanies it, authors Luz Calvo and Catrióna Rueda Esquibel focus on traditional Mesoamerican cuisine and sustainability. Recent recipes include Huaraches de Nopales and Xocolatamal.

The Decolonizing Diet Project, a research initiative of the Northern Michigan University Center for Native American Studies, maintains a blog and group site for the sharing of food lists, meal plans and other information. The “Week of Indigenous Eating,” established in 2011 to support the Decolonizing Diet project, takes place during the first week of November. Posts on the blog and Facebook page encourage participants to eat only pre-contact Western Hemisphere foods that week, excluding wheat, barley, rye, dairy products, beef, chicken, pork and many of the other foods brought here by settlers longing for the flavors of home.

Efforts to focus on indigenous eating — whether for a week, the duration of a study, or a lifetime — seek to remove or minimize the foods of colonization. “The Store Outside Your Door,” a project of the Alaska Native Tribal Health Consortium, encourages people to use the food resources around them. Other websites and online communities provide tips for grocery store foraging. A recent Decolonize Your Diet recipe for GMO-free corn tortillas provides a high-quality organic yellow dent corn source, and on Facebook pages, people share recipes, information and advice.

Although sophisticated North American trade routes carried the “three sisters” of corn, beans and squash far from the Mesoamerican soils where they were likely first sown together, many species, such as buffalo and salmon, have always been integral sources of sustenance for the people who shared the land with them. Despite the threats to these species and their habitats, many Native community members are working in the spirit of grateful reciprocity, whether planning a First Foods ceremony or posting a recipe for fish and cattails. In tribal communities, this spirit of Thanksgiving predates the 1621 feast by thousands of years, and as we continue to adapt to cultural change, we also need to preserve our own food traditions for our children and grandchildren.