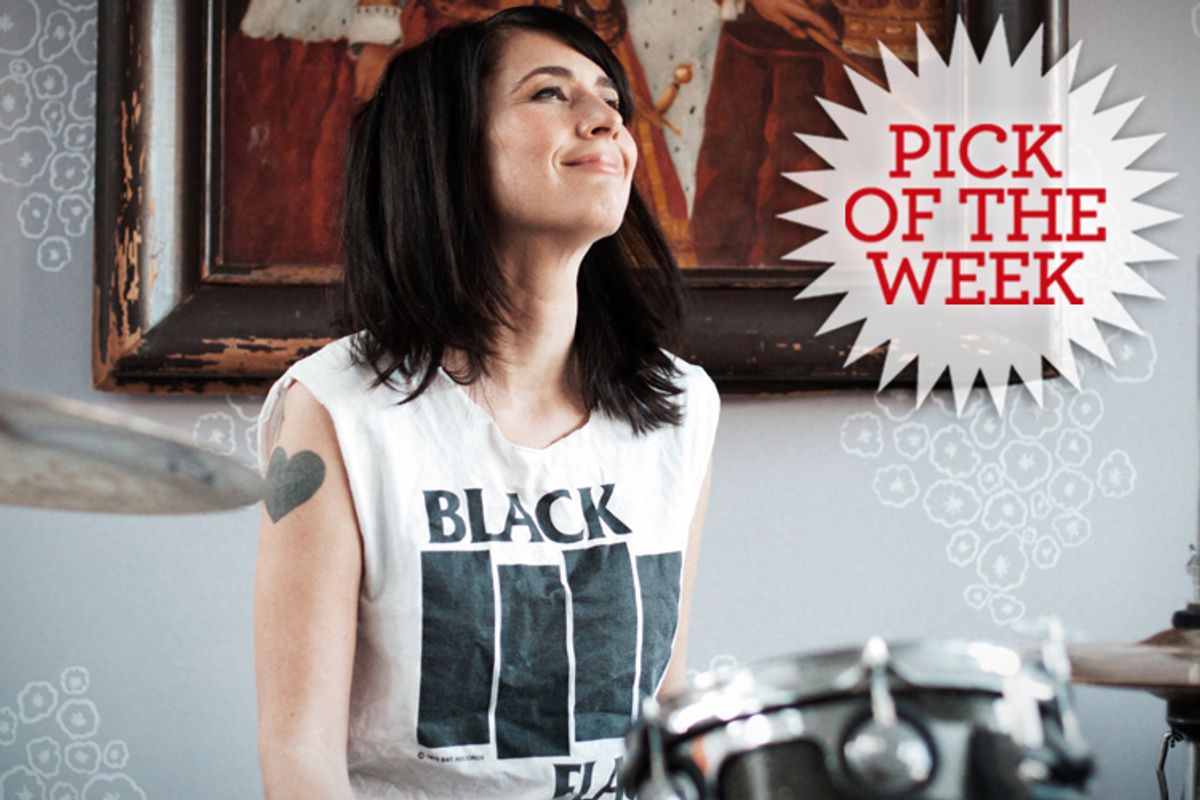 At the dawn of the 1990s, two streams of cultural revolution appeared to have burned themselves out. Time magazine ran a cover story asking whether feminism was dead, using the neurotic, relationship-obsessed heroine of “Ally McBeal” as a symbol of contemporary womanhood. Punk rock, which many people of my generation had seized on as a form of idealistic and/or nihilistic resistance to the Reagan years, had either been commercialized into radio-friendly pop music or ossified into the marginal, macho and sometimes violent hardcore scene. Then came Kathleen Hanna, who crashed those two streams together in messy, glorious and spectacular fashion, and they weren’t dead after all.

Of course it’s not that simple; nothing ever boils down to just one person in the end. One of the best things about Sini Anderson’s dense and enjoyable documentary “The Punk Singer” – along with its ferocious live footage of Hanna and her band Bikini Kill, who seem just as potent today as they did in 1991 in Olympia, Wash. – is its clear-sighted view of history. As an undergraduate at Evergreen State College in the late ‘80s, who had an interest in art, literature, music, fashion and feminism and was surrounded by more than a few like-minded young women, Kathleen Hanna was the right person in the right place at the right time. She wasn’t anywhere near the first female rock singer, nor was she the first one who consciously set out to break down the ingrained male supremacy of the punk scene or pop culture in general. (Two important foremothers and friends of hers, Kim Gordon and Joan Jett, appear in the film.)

But when you see Hanna onstage with Bikini Kill in 20-year-old footage, wearing a see-through bra and a miniskirt, with the word “SLUT” written across her midriff in lipstick, proclaiming, “We want a revolution!” or berating men in the audience for behaving like jerks, it still seems startling. Hanna mixed signals in a way no young woman in pop ever had before: She was sexy, she was angry, she was arrogant and she was in command. She strutted the stage with a confidence associated with generations of male cock-rock singers, sometimes announcing, “These are my tits! This is my ass!” She talked like a Valley girl – an accent she had diligently studied in suburban Maryland, she tells Anderson – but a Valley girl who ordered the men to the back of the club, and asked all the “girls” to come up front.

You could certainly argue that everything Hanna did in the early ‘90s, from her then-bewildering combination of overt sexuality and confrontational anger to her insistence on the word “girl,” were later co-opted and commodified by consumer culture, just like every other gesture of resistance. And you’d be right: What is Katy Perry – a shrewd operator who plays the self-constructed role of America’s slutty sweetheart -- if not a reengineered, market-tested and corporate friendly version of Kathleen Hanna? But revolutions of any kind always lead to contradictory outcomes, and there are a lot worse things in the world than Katy Perry. It’s also accurate to note that the influence of Hanna and the “riot grrrl” moment was mostly limited to young white women in North America, at least at first. But over the long haul, their cultural impact has been enormous.

Anderson’s film is at its most vibrant in recapturing the meteoric career of Bikini Kill, whose eight-year existence, from 1989 to 1997, encompassed the crest of the riot-grrrl wave and took the band from Washington state to Washington, D.C., and back again. Hanna’s close friendship with Kurt Cobain and her backstage brawl with Courtney Love – a completely unmotivated attack, Hanna says -- are indeed covered, but this film goes much deeper than a gossipy MTV-style “Behind the Music” special. Extensive interviews with Hanna then and now are included, along with band mates, friends, mentors and several different critics and journalists (including my former colleague and good friend Ann Powers, a crucial resource on these issues).

Bikini Kill became famous without ever getting rich, and Hanna learned the hard way how ruthlessly the media (including female-centric or female-run media) can treat unconventional women. She had indeed worked as a stripper, a fact that became media catnip, and she was frequently portrayed as a survivor of incestuous abuse or rape, although she says she never made such a claim. (In the film, she says her father had behaved in a “sexually inappropriate” fashion, but had never raped her.) Hanna’s relationship with Adam Horovitz of the Beastie Boys – they’ve been together for 16 years, and are now married – initially struck some of her fans and followers as unfortunate or unlikely (given his macho-rapper past), and Hanna says here that it took her a while to understand that “you can’t legislate who you fall in love with.”

After several years with the slightly poppier band Le Tigre after Bikini Kill’s demise, Hanna stopped performing around 2005. In “The Punk Singer,” she reveals that a whole series of troubling physical and mental symptoms, later diagnosed as Lyme disease, led her into a more private existence. (I realize that remains a controversial diagnosis, at least as a long-term syndrome, but that’s really not the subject of the film.) As Hanna’s fans already know, she’s back onstage with a new band called the Julie Ruin, who sound terrific. Today she can be a singer, a musician, a poet or an artist, but we can’t ask her to be a revolutionary. She already did that. Kathleen Hanna didn’t end sexism or sexual violence, any more than Martin Luther King or Barack Obama ended racism. But she started by doing something that seemed small -- playing loud music for tiny audiences 20 years ago – and ended up doing something very big, helping to create a world where girls can grow up without ever thinking that some things are off limits, that some ways of expressing yourself or modes of being in the world are just for guys.

“The Punk Singer” opens this week in New York, with a national rollout to follow, and is also available on demand via cable, satellite and online platforms.