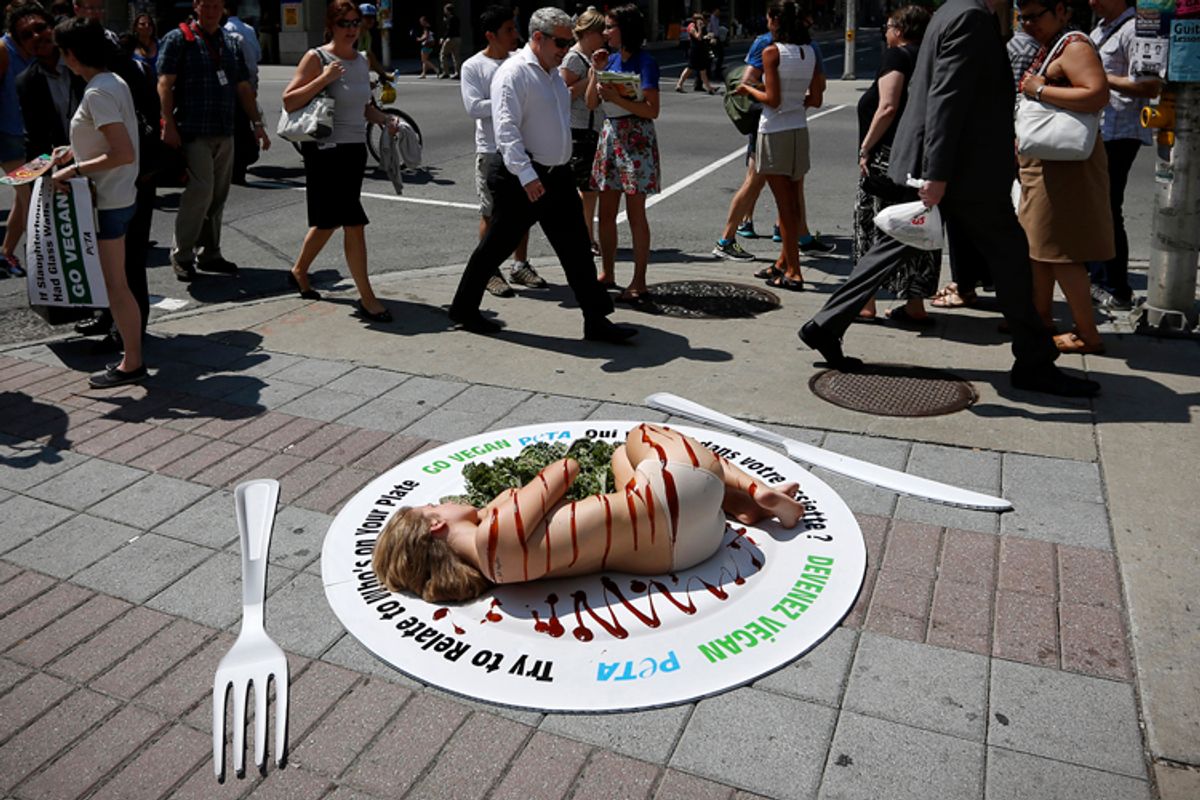 An activist with PETA lies covered with barbecue sauce during a protest against the consumption of animal products, in Ottawa July 17, 2013. (Reuters/Chris Wattie)
--

Oh, is PETA pulling some sexist, obnoxious stunt again? You don't say! To their credit, this time, they've rather ingeniously managed to find a link between reproductive rights issues and veganism. And it's fat shaming.

Jumping on the news from last week that the emergency contraceptive Plan B One Step loses effectiveness on women over 165 pounds – and doesn't work at all on those over 176 pounds – PETA on Monday sent out a press release its "Plan V" advice: lose some damn weight and then you won't have to worry, now will you? Have a carrot! In its announcement, PETA explains that it's helpfully contacted the advocacy group Population Connection to "encourage women to lose weight (and regain access to Plan B as a family-planning tool) by choosing healthy vegan meals .... Vegans are 18 percent thinner than their meat-eating counterparts ... We hope that Population Connection will consider the serious impact that excess bodyweight could have on its goals and incorporate 'Plan V' into its action plan." You'd think they'd have wanted to play up the studies that suggest vegans have more erratic menstrual cycles too. Plus, you have such a pretty face, dear. Why can't you lose 10 pounds?

Whatever an individual's personal reasons for embracing a particular diet, it is inane that a widely available form of emergency birth control does not work on a large number of potential consumers. That is a failure of the manufacturer, not of women who happen to weigh more than 165 pounds. And by the way, PETA's apparent assumption that any female of childbearing age needs to hit a certain weight limit – regardless of her BMI, fitness level or height, is so simplistic it actually veers straight into moronic. Population Connection president John Seager told Mother Jones Monday, "It would be unfortunate if the importance of access to and consistent use of modern contraception gets lost in some wide-ranging discussion about everything under the sun, including the many positive benefits of a vegan diet."

That this sorry, misogyny-riddled excuse for an activist group continues to be taken seriously, to attract big name celebrity supporters, is both depressing and absurd. Believe it or not, you can speak out against animal cruelty without being sizeist jerks. You can address meaningful issues without perpetually declaring to the world your eagerness to use thin naked women at any and every available opportunity, while concern trolling females whose bodies are a different, apparently un-PETA-approved size. And though I've absolutely no doubt PETA will continue to do what it's famous for – objectify and demean women – it bears repeating that you can be an organization that cares about animals without being jerks to half the human population.