A major scholarly group affirms a boycott over Palestine. They're right and ethical -- and widely misunderstood 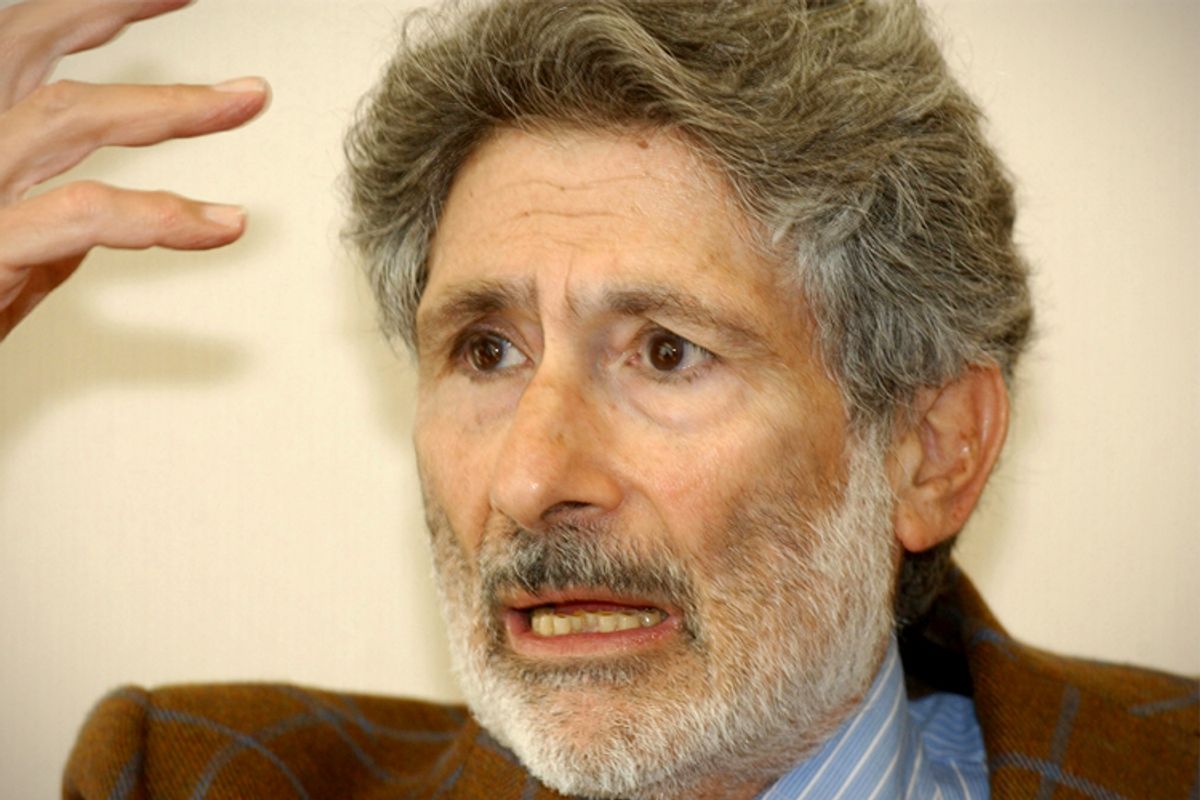 In recent years, we have seen greater recognition in the United States that religious acrimony and ancient blood feuds are not the source of the Israel-Palestine conflict, whose progenitor in fact is Jewish colonization. As this recognition grows, along with corresponding support for Palestinian human rights, unprecedented pressure bears on Israel’s defenders to maintain the once-dominant narratives of Israeli victimhood and Palestinian terror.

These days, Israel is an extremely difficult state to defend.

It should be so. Israel continues to make a mockery of the “peace process” by constructing new settlements and insulting American leaders. It tolerates politicians who routinely make racist statements. And it continues to be in violation of at least 77 United Nations Resolutions and numerous provisions of the Fourth Geneva Convention.

The latest challenge to these violations comes from the Boycott/Divestment/Sanctions movement, which has attracted the attention of pro-Israel advocacy groups and the Israeli government itself, thus validating the efficacy of the tactic. A specific element of BDS, academic boycott, was recently ratified by the Association of Asian American Studies and enjoys overwhelming support among the membership of the American Studies Association, whose National Council today voted to affirm a resolution honoring the Palestinian call to boycott Israeli universities.

Although at first glance academic boycott seems vengeful and arbitrary, its mission is rigorous and ethical, perfectly concordant to comparable boycotts that earned widespread support in the United States (against apartheid South Africa, for instance, or Arizona when it refused to recognize Martin Luther King Jr. Day).

Academic boycott entails specific principles that are widely misunderstood or misrepresented. Boycott of Israel does not mean shunning everything or everybody Israeli, nor is it a radical commitment to national destruction. It is not an abrogation of academic freedom. It does not demand that we smash our laptops because they contain Israeli processors. One can boycott Israel and still care about oppression in other parts of the world.

Academic boycott, quite simply, is a rejection of complicity in the Israeli government’s brutalization of Palestinians, a form of nonviolent resistance at the nexus of the globe’s greatest confluence of geopolitical power. It asks individuals and institutions to refuse Israeli state funding, to decline invitations to visit Israeli institutions (either by avoiding those institutions or choosing to travel to the West Bank or Gaza instead), to cease hosting representatives of Israel directly or indirectly sponsored by the state, and to reject institutional partnerships with Israeli academe.

Since its inception in 2005, BDS has profoundly altered the discourses and debates around the Israel-Palestine conflict in the United States.

The greatest worry around boycott is the possibility of restricted academic freedom. Such worry is unfounded, however. Academic boycott targets institutions and does not preclude collaboration with individuals. The Palestinian Campaign for the Academic and Cultural Boycott of Israel is explicit that Israeli citizens are able to serve on editorial boards and as external referees, submit research to any forum of their choosing, and travel without restriction. Nor are editors or search committees to reject articles and applications based on citizenship. Disparate rules based on ethnicity are solely the domain of the Israeli state.

The boycott actually seeks to preserve academic freedom by challenging punitive campus cultures that punish critics of Israel. Boycott is likewise an expression of academic freedom because it enables individuals to decline participation in sites of injustice by inscribing this sort of dissent as a form of protected speech.

At a recent conference hosted by a large professional association, I attended a wonderful talk by a Palestinian citizen of Israel, whom I will call Kareem. Kareem was invited by the conference organizers to speak on a panel about academic boycott. Although fellow panelists explored the subject, Kareem merely discussed the various forms of entrenched discrimination against Israel’s Palestinian minority, which he had unearthed in state archives.

I have changed the scholar’s name for the same reason he declined to endorse boycott: because in Israel, where Kareem would return after the conference, any support of boycott is illegal, punishable by a fine and denial of benefits, and subjecting violators to civil lawsuits.

To recap: An Israeli citizen was invited to speak on a panel exploring boycott, but had to limit his speech because the fear of incrimination by Israel.

Who, then, is restricting academic freedom?

In terms of its ability to prevent recrimination, academic freedom is largely mythological. Dissentient speech can be contained by dominant standards of erudition and respectability. The economies of tenure and promotion coerce obeisance to those dominant standards. Academic reward systems are set up to punish deviation. Nothing is more deviant than criticizing Israel.

In practice, there has never been academic freedom vis-à-vis the Israel-Palestine conflict, at least not for those who support Palestinian human rights, and not if we grant that an important element of academic freedom is the ability to carry on a career free of intimidation and harassment.

The other main objection to academic boycott (and to BDS generally) is that it “singles out” Israel. This objection not only lacks merit; it also performs the same singling out of Israel its adherents claim to abhor.

Of all the world’s settler colonial projects, Israel is uniquely protected from wholesale condemnation in the United States.

When Zionists respond to BDS by asking “why don’t you boycott [insert oppressive state]?” they merely affirm Israel’s bad behavior by eliding responsibility and asking other countries to answer for Israel’s violence. The elision is hypocritical, suggesting that it’s acceptable to criticize, say, China, while criticism of Israel is unfair simply because Zionists, on behalf of all Jews, have outfitted the state with a specific ethnic character.

The ultimate goal of academic boycott is to compel Israel to abide by the human rights conventions and international laws to which it is beholden, but one of its effects is to undermine Israel’s status as an exceptional democracy beyond the reproach of less enlightened nations.

The only people singling out Israel in this debate are those opposed to BDS.

Even those who opposed boycott of South Africa or Arizona understood that white folks weren’t the victims of inequitable economies and legal systems. What sets Palestine apart is the persistent notion that the colonizers, those with nuclear weapons and land and resources and legislative power and the full support of the United States, are the oppressed party, that they largely suffer the pain and indignity of the conflict, that BDS is furtively anti-Semitic, that Israel is a special case in history. Remove this duplicitous reasoning and most rationalizations for rejecting boycott go away.

Here are the facts: No evidence has ever been presented that the Israeli government is interested in a viable solution to the conflict. Instead, Israel has persistently built illegal settlements, intensified its Judaization programs, shot and arrested children, appropriated land, destroyed olive groves, flaunted international law, tolerated pogroms against black immigrants, and passed overtly racist legislation, all of it with indisputable, institutional participation from Israeli universities.

More facts: The people of Palestine have been subject to a project of settler colonization for nearly 150 years, as long as the French occupied Algeria. Over a million Palestinians live in refugee camps throughout the Arab World, many in severe poverty. Palestinian citizens of Israel inhabit the lower level of a two-tiered legal system that limits their rights to employment, land ownership, education, mobility, free expression, political participation and public services. The Gaza Strip is destitute and overcrowded, victim of an Israeli campaign to strangulate its economy with the express purpose of making its residents starve and suffer. The West Bank is carved into hundreds of inaccessible geographies separated by segregated highways, settlements, checkpoints, military installations and concrete walls.

Despite these horrible realities, this antediluvian system of biological determinism, we’re told repeatedly by those opposed to BDS that the desires of the colonizer supersede the rights of the colonized. They rarely say it outright, but it’s the primary assumption underlying the mistaken argument that boycott harms innocent Israelis. By this logic, the black boycott of Montgomery’s bus system would have been unjustified because it might have harmed the drivers.

The most innocuous-sounding but insidious of these colonial apologetics assails us about the need for dialogue, not rejectionism. Yet boycott hasn’t emerged from ahistorical circumstances. It has arisen from a need for action as a result of failures of dialogue over multiple decades, a dialogue monopolized by Zionist voices.

Anyway, boycott constitutes a form of dialogue, one in which the Palestinian people finally participate. Their contribution to this new dialogue is the announcement that they will never tolerate dispossession and will never accept their fate as expendable in the Zionist narrative.

My maternal grandmother lost her home in Ein Karem, outside of Jerusalem, in 1948. She has never been compensated. Her loss has never been acknowledged by Israel. She refuses to visit an artsy, upper-class, Jewish suburb of Jerusalem that was once a Palestinian village — her ancestral home. She has neither forgotten nor forgiven. I haven’t forgotten, either. I am perfectly willing to forgive, but only in the presence of justice. Oppressors aren’t allowed to ask for forgiveness if they refuse to relinquish any of their ill-gotten power. They will not, they have shown repeatedly, relinquish that power voluntarily.

I practice BDS because it’s the only power I have in the face of the tremendous military and economic might of Israel and its American sponsor. It is a largely symbolic power, a nonviolent act of simple defiance, void of guns and platforms and legislation, but if enough people participate, it has the potential to topple a colonial empire, one that yearns for the acceptance and affirmation of the same people it dismisses and displaces, and one that hasn’t yet learned that friendship is based not on force but on respect earned through introspection and compassion.

I will teach my son the history of Palestine. He will teach it to his children. Our stories will outlast Zionism.

Israel doesn’t want to be boycotted? Fine. Then Israel needs to practice true democracy. That is all BDS asks of it. It is by no standard an unreasonable demand.