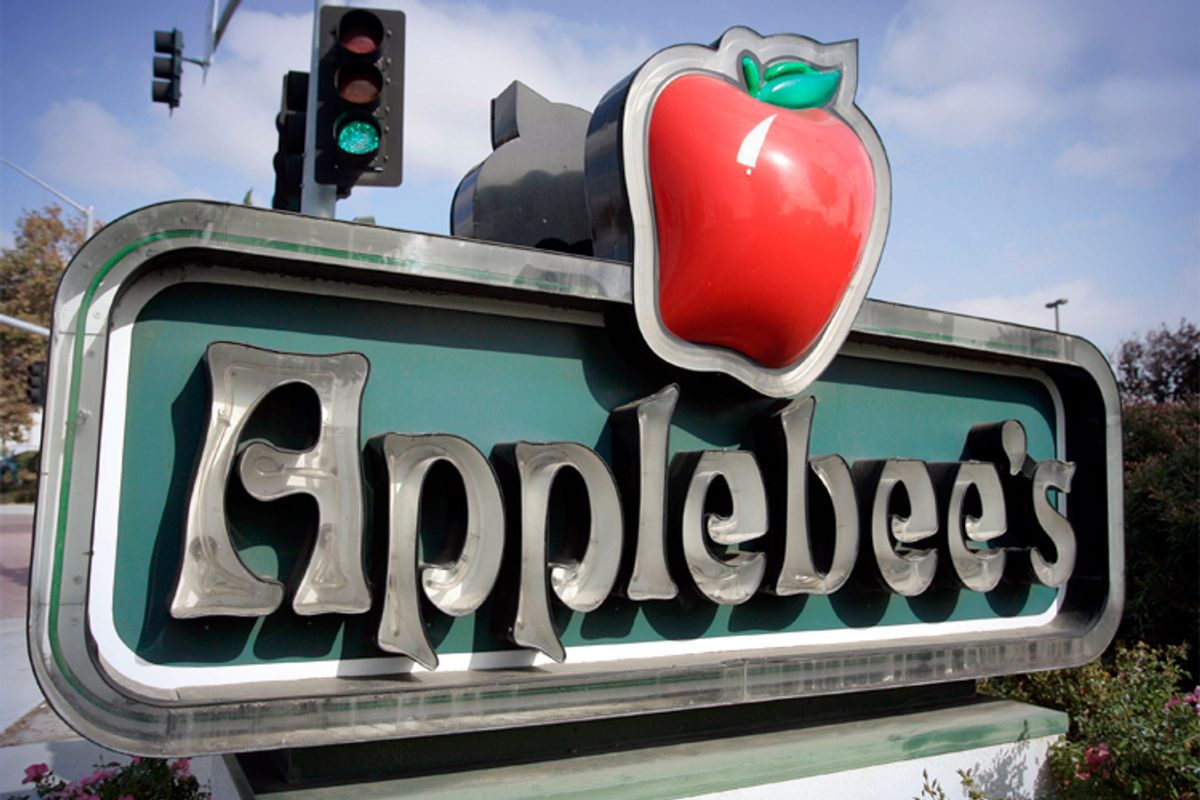 It took them a while, but Applebee's has finally figured out a way to make eating in its restaurants even less charming. The restaurant chain announced Tuesday its intention to install "100,000 tablet computers in its more than 1,800 locations nationwide by the end of next year." Soon, there will be tablets on every table and at every bar in every Applebee's in all of creation, enabling diners to peruse the menu, pay the bill and play games. Chili's, Uno's Chicago Grill and California Pizza Kitchen already use similar devices, and plan to roll them out into even more of their own restaurants in the coming year.

Slate quickly dubbed the new venture an enterprise to "replace waiters," and Time declared, "You'll never have to interact with another human being again." But at least for now, the company insists the move won't affect its staffing. And if the tablets take off, they could conceivably help staff earn more tips – by enabling patrons to pay more quickly and efficiently (a swipe of the credit card at the patron's convenience, rather than the bringing of a bill, ringing it up, and bringing back the change) -- a move that spells higher turnover.

Tablets have been turning up steadily at restaurants over the past few years, and not just in places with a triple chocolate meltdown-centric bill of fare. Two years ago, Chicago Cut Steakhouse introduced an app to "allow our customers to search by varietal, vintage, price and more," and servers provide iPads for patrons to browse it. Similarly, Celebrity Cruises uses iPad menus for its on-board guests.

But despite the already entrenched presence of restaurant table tablets, the Applebee's news reverberated widely this week, with much hand-wringing over whether the chain would not just replace its waitstaff but altogether "ruin" dinner conversation – especially family conversation. Putting aside for a moment the question of how meaningful a social experience one might ever have dreamed of having at Applebee's to begin with, the concern is not entirely without merit. The Family Dinner Project notes the wealth of evidence that the simple act of sitting together and sharing dinner conversation, consistently, helps children "perform better academically, have higher self-esteem, and have a lower risk of substance abuse that those of families who do not."

As an official fogey, I am entirely in favor of undistracted dining, the kind that doesn't involve glowing screens. I insist on it in my home, and mandate it when I go out with my offspring. And I like that my local café has a "no laptops" area and strictly enforces its policy of keeping that space for human-to-human-or-human to coffee purposes only. Sure, it also benefits the business, cutting down on patrons who might camp out all day writing their novels, but it also keeps the flow of customers a healthy mix of the sociable and the less so.

But all the pearl-clutching over the fear that Applebee's is single-handedly going to wreck dining out – especially in a manner that has nothing to do with its food – is pretty silly. Here's the truth – everything is already wrecked. Family-friendly chains already have television sets blaring out of every corner. And should you find yourself in a Chili's or similar sometime soon, look around the patrons, especially those with kids. The kids are engrossed in their DS systems, and the parents are taking pictures of their spinach dip to post on Instagram. They're already not paying attention to each other. What's one more device on the table, one more distraction?

When critics fret that tablets on every Applebee's table are going to fundamentally ruin our ability to sit down and talk to each other over a meal, they're pining for an experience that is already, in many ways, gone. It died a little every time we looked up at the game instead of the person across from us, or handed the toddler the phone to play with so we could eat in peace. And Applebee's didn't do that; we did, a long time ago.