A brief history of cocaine

Both the Pope and France's chief rabbi endorsed Vin Mariani, a concoction of Bordeaux and cocaine. It sold well 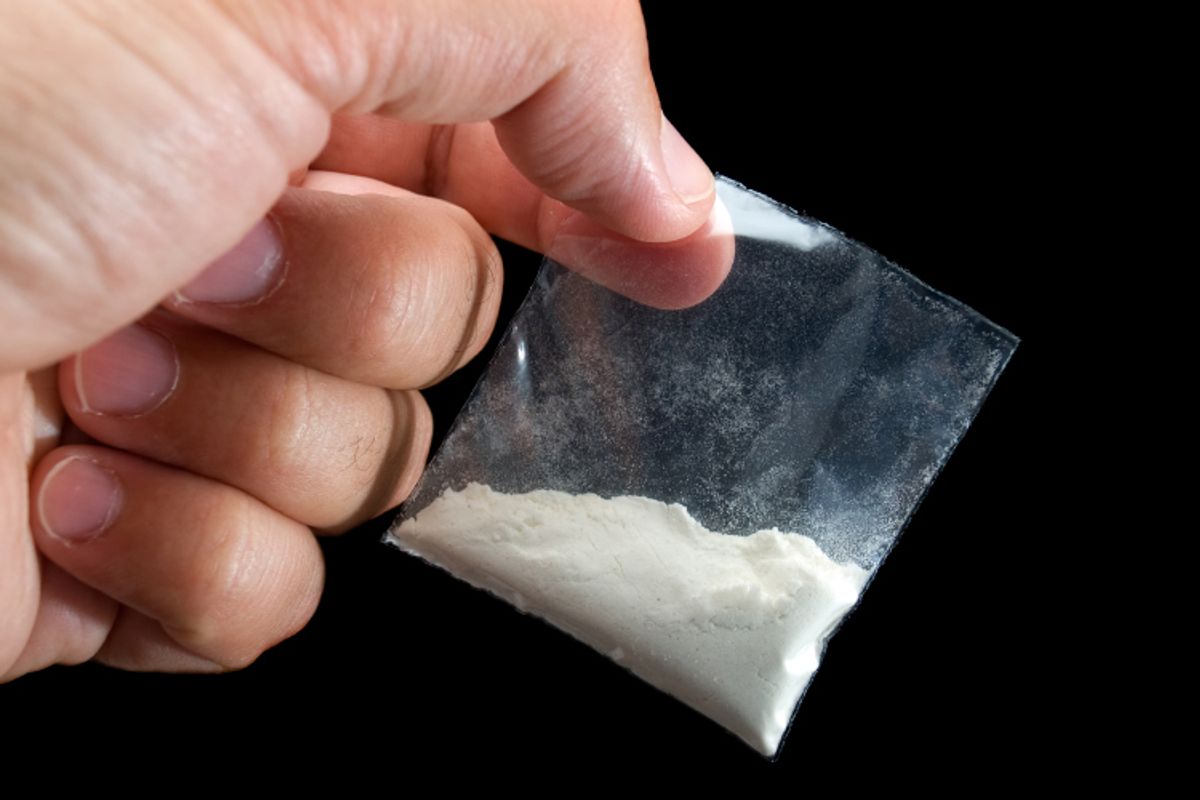 Cocaine is yet an example of an important pharmacological discovery resulting from the collision between the Old World and the New. The modern world’s appreciation of the properties of cocaine began shortly after the discovery of the New World when reports began to filter back describing the fact that South American Indians could be frequently observed chewing the leaves of the coca shrub, Erythroxylum coca. There appeared to be two main reasons why they did this. Indeed, these are the same two reasons that its products are still used today—stimulation of the nervous system and local anesthesia.

For example, in 1539 Vicente de Valverde, who had accompanied Pizarro during his conquest of the Incas, wrote:

“. . . coca, which is the leaf of a small tree that resembles the sumac found in our own Castile, is one thing that the Indians are ne’er without in their mouths, that they say sustains them and gives them refreshment, so that, even under the sun they feel not the heat, and it is worth its weight in gold in these parts, accounting for the major portion of the tithes.”

And in 1653 the priest Bernabe Cobo wrote:

“And this happen’d to me once, that I repaired to a barber to have a tooth pull’d, that had work’d loose and ach’d, and the barber told me he would be sorry to pull it because it was sound and healthy; and a monk friend of mine who happen’d to be there and overhearing, advised me to chew for a few days on Coca. As I did, indeed, soon to find my toothache gone.”

There is every reason to believe that the habit of chewing coca leaves together with lime rapidly became a habit not only among the Indians, but also among their Spanish masters. By the beginning of the nineteenth century, travelers from outside Spain, such as the German biologist Alexander von Humboldt, also began to send back reports about the remarkable properties of coca, particularly about how it allowed Indian workers to allay fatigue and hunger. For example, a report in the Gentleman’s magazine in London in 1817 observed:

The Indians masticate Coca and undergo the greatest fatigue without any injury to health or bodily vigor. They want neither butcher nor baker, nor brewer, nor distiller, nor fuel, nor culinary utensils.

As we have seen, the early part of the nineteenth century was a time of great excitement and achievement in the organic chemistry of natural products. Alkaloids like morphine and caffeine were being isolated at a rapid rate, and it was natural for people to turn their attention to coca. Some progress was initially made demonstrating that the active principle of coca could be extracted into organic solvents. However, coca leaves were indifferent travelers, much worse even than tea, and getting large quantities of fresh leaves to Europe for analysis proved problematic. Nevertheless, in 1859 a German scientist named Carl Scherzer managed to import a large quantity of good quality coca leaves into Germany and gave them to Friedrich Wohler, a chemistry professor at the University of Gottingen. The professor then passed the leaves on to his graduate student Albert Niemann as an appropriate topic of investigation for his doctoral thesis. Niemann duly obliged, and isolated pure cocaine as a white crystalline substance that produced numbness when he placed it on his tongue. Unfortunately, Niemann also discovered mustard gas and died, probably from contact with this substance, the very next year. His colleague Wilhelm Lossen elucidated the chemical formula of cocaine in 1865, and the chemical structure was obtained by Richard Willstatter in 1898.

Cocaine is a tropane alkaloid, which means that it contains the heterocyclic tropane group, making it somewhat similar in structure to atropine, which as we have seen is a commonly used antagonist of muscarinic acetylcholine receptors. This interesting substance, also known as “belladonna,” is isolated from the deadly nightshade plant and, as we have mentioned, was what Runge used to dilate the pupils of a cat’s eye as a demonstration for Goethe. When considering the bipartite structure of the cocaine molecule, a question of immediate interest is whether its psychostimulant and anesthetic properties are derived from the same parts of the molecule?

The use of cocaine as a local anesthetic is itself an interesting story. It was none other than the young Sigmund Freud who developed a strong interest in the drug early in his career. Having acquainted himself with both its psychostimulant and local anesthetic properties, he passed his knowledge along to his colleague the ophthalmologist Karl Koller who, intrigued with the anesthetic properties of the drug, began to investigate its possible use as a topical anesthetic for eye surgery. His efforts were met with considerable success and his results widely disseminated. Eventually they were translated and published in the prestigious British medical journal The Lancet, where they were read by the pioneering American surgeon William Halsted. Halsted then attempted to use cocaine as an anesthetic for producing nerve block (i.e., the deadening of sensation due to an entire nerve) and found he could successfully carry out dental surgery on his medical students this way (students are less amenable to this kind of thing nowadays).

Results such as these were quickly followed by widespread adoption of cocaine as an effective local anesthetic in medical practice. However, it also became apparent that the drug produced toxic effects, primarily due to its actions on the cardiovascular system if it reached the systemic circulation, and so enthusiasm for its use gradually waned. Nevertheless, its evident utility encouraged the search for analogues of cocaine that would retain its local anesthetic effects but be free of its psychostimulant and toxic actions. Chemical synthetic efforts quickly demonstrated that it wasn’t the tropane portion of the molecule that produced effective anesthesia, and derivatives of the benzoic acid portion of the molecule starting with amino acid and amino ester derivatives were developed. These were mostly produced by the Hoechst company in Germany under the leadership of Dr. Alfred Einhorn, and soon gave rise to drugs such as procaine and lidocaine, and subsequently to a large number of other local anesthetics that are still in use today.Actually, cocaine is also still used for this purpose in particular instances, such as some types of ear, nose, and throat surgery due to its unusual ability to combine local anesthesia with vasoconstriction.

From coca to coke

It was in the nineteenth century that recreational use of cocaine also began to take off in Europe. In 1859 an Italian neurologist named Paolo Mantegazza visited Peru and performed a great deal of self-experimentation with coca, ranging from low to extremely high doses. He reported his experiences in a paper entitled “On the hygienic and medical values of Coca,” which discussed the drug’s ability to reduce hunger and fatigue, as well as to produce a mad mental “rush” at higher doses. This kind of literature started to increase interest in using the drug back in Europe. One notable feature over the years has been the development of different ways of taking the drug. To begin with, cocaine was readily available in a variety of drinks and tonics. These helped to cover up the basically bitter taste of the alkaloid. A good example was the Vin Mariani developed by the Corsican Angelo Mariani.

Vin Mariani was a concoction of cocaine in claret, which was certainly a very reasonable idea. Not surprisingly the combination of a good Bordeaux with cocaine sold extremely well. Not only did the drink have the attractive effects of both of its ingredients going for it but Mariani was also an excellent publicist, obtaining affidavits from all kinds of famous people. These included, believe it or not, both the pope and the chief rabbi of France. Eventually Mariani marketed a large number of cocaine products in addition to his wine, including tea, lozenges, and cigarettes.

Inspired by success of Vin Mariani, John Permberton, a drugstore owner in Columbus, Georgia, formulated his own version known as “Pemberton’s French Wine Coca.” However, when Fulton County where he lived prohibited the sale of alcohol, he had to change his drink and came up with a nonalcoholic version based on kola nut extracts and other ingredients in addition to coca. Kola nuts are another natural source of significant amounts of caffeine. Thus the original Coca Cola, as the drink was eventually named, contained both cocaine and caffeine. Coca Cola was originally sold as a “nerve tonic” and was claimed to have numerous health-giving and restorative powers. The cocaine content was radically reduced in 1903, but to this day coca leaves are still used to flavor the drink once most of their normal content of cocaine has been removed.

Cocaine hits the streets
For serious cocaine consumers, other products were also available in the late nineteenth century. Large drug companies such as Parke-Davis in Detroit also got into the cocaine game. They developed processes for the mass production of easily crystallizable and soluble salts like
hydrochloride, which could be accurately measured and dispensed. Finely powdered “lines” of cocaine could easily be “snorted” through a cut straw or rolled up banknote and would enter the well-vascularized mucous membranes in the nose and move from there into the blood and then the brain relatively quickly. Naturally, the most efficient way of taking cocaine, just like morphine, was to inject it intravenously. To satisfy this portion of the cocaine market, drug companies like Parke-Davis also came up with drug-taking paraphernalia such as nifty little boxes that contained syringes, needles, and supplies of cocaine all packaged together as a fashion accessory for the smart set. According to Parke-Davis’ own ads, cocaine “could make the coward brave, the silent eloquent, and render the sufferer insensitive to pain.” As we have seen with other powerful and potentially dangerous drugs, the end of the nineteenth and the beginning of the twentieth century was a time when these things were generally available and not illegal. In fact, cocaine could be purchased over the counter in the United States until 1916.

In recent years the consumption of cocaine has also been associated with innovations in how the drug is prepared, marketed, and used. Freebase or “crack” cocaine, which started to appear in urban areas in the 1980s, is often the method of choice today. Making crack is very simple and can be achieved with a few basic ingredients heated together in something like a spoon. The products can be collected and dried to form large crystalline “rocks.”

Crack cocaine vaporizes very easily—the sound of the heated rocks crackling being responsible for its name. These vapors can be inhaled and blood levels rapidly approach those produced by intravenous injection because of the extensive surface area allowing absorption into the pulmonary circulation, and the drug reaches the brain within a few seconds. On the other hand, cocaine salts such as the hydrochloride do not vaporize in this way and so cannot be used in this manner. A similar technique to the use of crack is known as “freebasing” in which the cocaine base is first precipitated out from its aqueous salt using alkali and then extracted into an organic solvent like ether and dried. However, as such preparations may still contain appreciable amounts of organic solvents they are likely to flare up when heated and this can be very dangerous, as might be imagined. Overall, there are numerous ways in which cocaine can be utilized today and these result in somewhat different drug experiences.

Unfortunately, cocaine is certainly very addictive and even today its use constitutes an enormous drug abuse problem throughout the world. The story has often been told of how many of the people who pioneered the use of cocaine, including Freud and Halsted, ended up as addicts. Today, cocaine addiction is still with us in a major way and it is not restricted to any particular part of society.